The first of the four units of Spanish Line Infantry that I completed this month takes the stage at last! 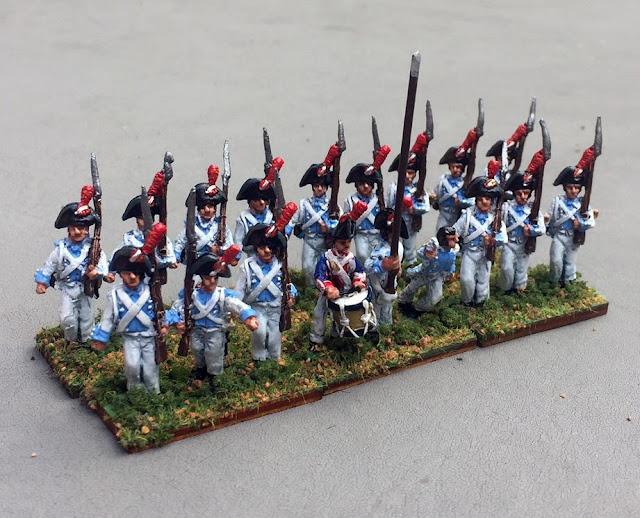 Regimiento de Infanteria València was first raised in 1658, ranking it as the 13th such unit in the Spanish army. Valencia is the the third largest city in Spain, and was founded by the Romans in 138 BC. It was reconquered from the Moors in 1238. It served briefly as the Capitol of Spain under Joseph Bonaparte in 1812, and again in 1936 - 1937 under the Second Republic. Located on the Mediterranean coast, it is famous for orange trees and Paella!Among a great many other sights, it contains the Chapel of the Holy Grail. 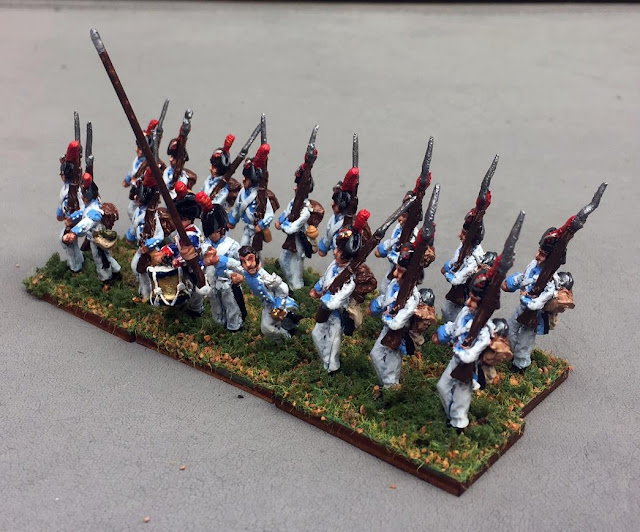 In 1791 the unit was wearing white coats with scarlet cuffs and lapels, both with buff piping, buff collars, and Pewter buttons. 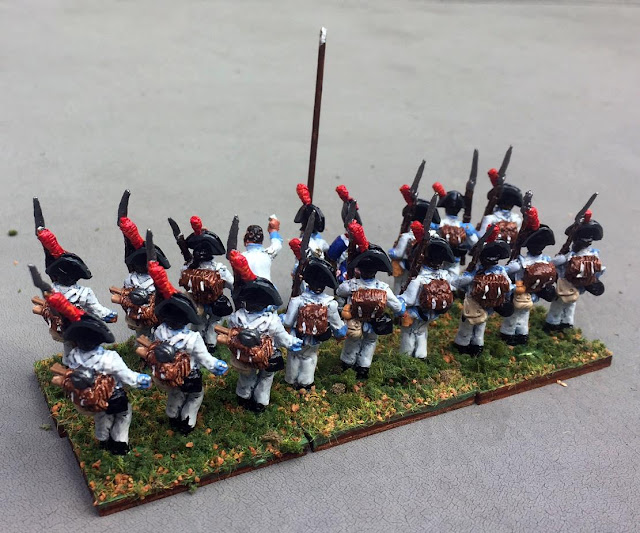 Along with the other Line regiments, in 1802 the uniform was changed to deep sky blue coats with black collars, cuffs, and lapels, and red turnbacks. I used Delta Ceramcoat "Bluejay" as the facing color on the white coats. Note the various items hanging from the packs of these obviously veteran campaigners! 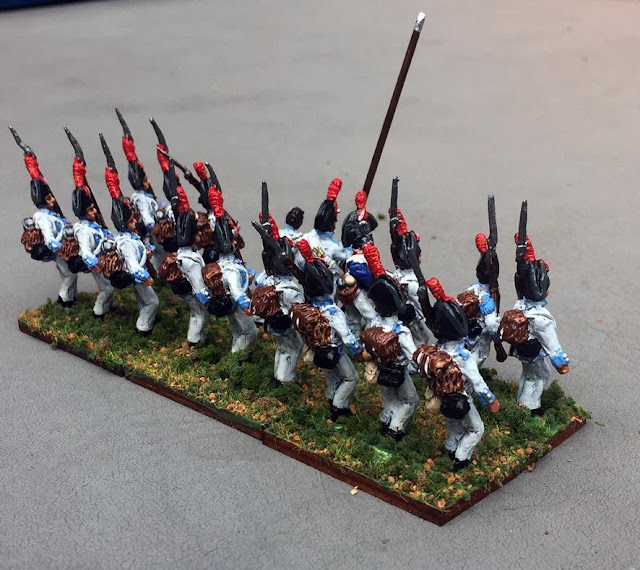 This change of dress proved highly unpopular, and in 1805, a return to the white uniforms was ordered. The new scheme had the regiment as I have painted it here - white coats and breeches, sky blue lapels, collars and cuffs, piped white, white turnbacks piped sky blue, and pewter buttons. This was the uniform worn, at least officially, when the French invaded under Napoleon in 1808. 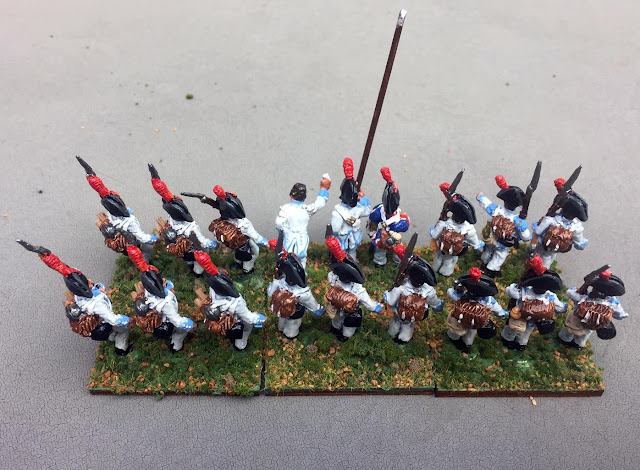 The drummer wears the King's Livery - a dark blue coat with red facings piped white.
These are Miniaturas Dos De Mayo 28 mm figures from Spain; they will be equipped with Adolfo Ramos flags, also from Spain.
Posted by Gonsalvo at 6:32 PM 16 comments:

Well, my freind Jon over at the Palouse Wargaming Journal is at it again... giving away free stuff, that is. That he's painting up a storm  of great looking troops is a given; when is Jon NOT doing that?

To celebrate the 5th Anniversary of his blog, Jon is holding a drawing, giving away three $25 gift cards. The drawing ends September 22nd. To see the rules and enter the drawing, head on over to Jon's excellent blog. While you're there, poke a around a bit; there's plenty of good stuff in the 800+ posts there! Like Jon, one of the major benefits of my own blog has been discovering new friends around the world, and Jon himself has to be high on that list! Now, to paraphrase the contest rules from "Michael Feldman's Whadya Know?", "Readers who have won recently should sit on their hands and let someone else have a chance for a change." That would certainly apply to me, h$aving won two excellent books in previous give-aways of Jon's... To which I can only respond,
Fat chance, baby!"  I'm a cheap one, I am!  :-)

It has been an uncharacteristically long time since my own last post. The main reason for that is simple; I have been working my rear end off, up to 15 hours a day, and often 7 days a week. Hopefully that will calm down soon!  I have not been completely idle on the hobby front, however. I will borrow a leaf from Jon's book by some WIP pictures. 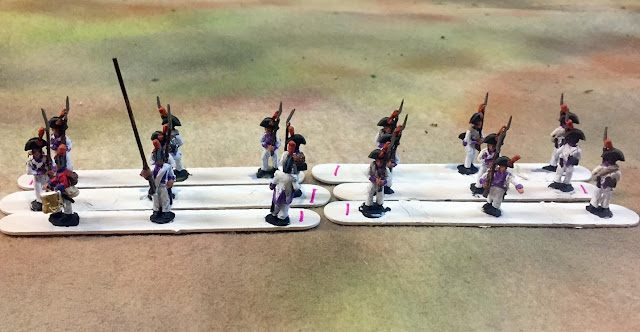 This violet faced unit will be  the Reina (Queen's) regiment. 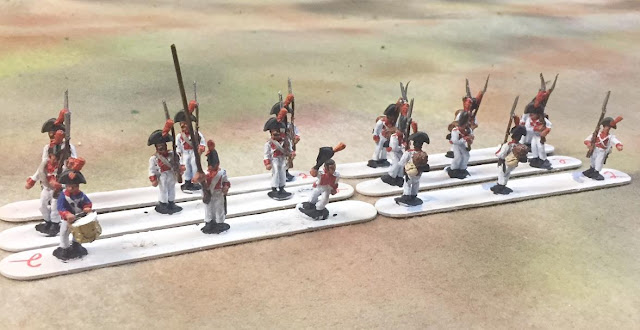 This red faced unit will probably be Cordoba.

This sky blue faced regiment will probably be Valencia.

This green faced regiment will be Zaragoza.

I have already  primed the castings for 2 Militia regiments,. 2 Light Regiments, and 2 Grenadier battalions as well. The Spanish Festival is well under way here on The Danube!

"The Lonely Bull"
In addition to this great instrumental being the first hit for Herb Alpert and the Tijuana Brass, it was also one of our stock numbers during my time  in the UConn Marching Band (1973 1976). I recall playing it in most of the shows and parades we did on Tour in Europe during the Spring of 1974, and it was always well  received. Frankly, I think our arrangement was even better than the original, but we did have the advatage of 160 musicians to play it!
Posted by Gonsalvo at 7:00 PM 12 comments:

Books and Plans for my Spanish Napoleonic Project

I took advantage of Osprey publishing's August sale (30% off most titles) to add some new titles to my collection, mostly focused on my Spanish Napoleonic project. 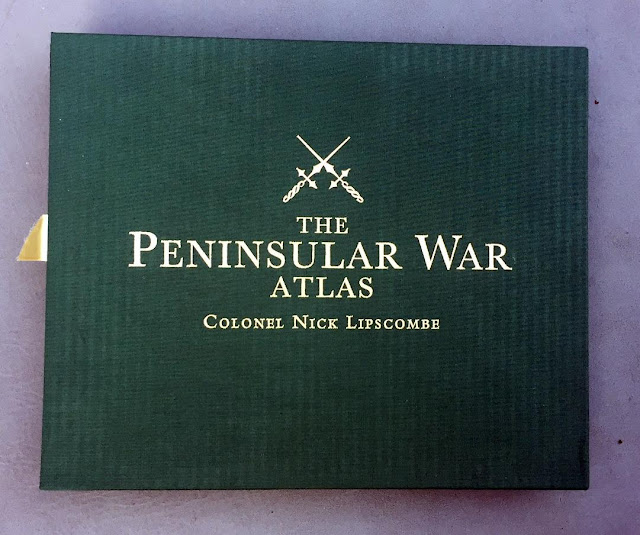 This was the key item I wanted. 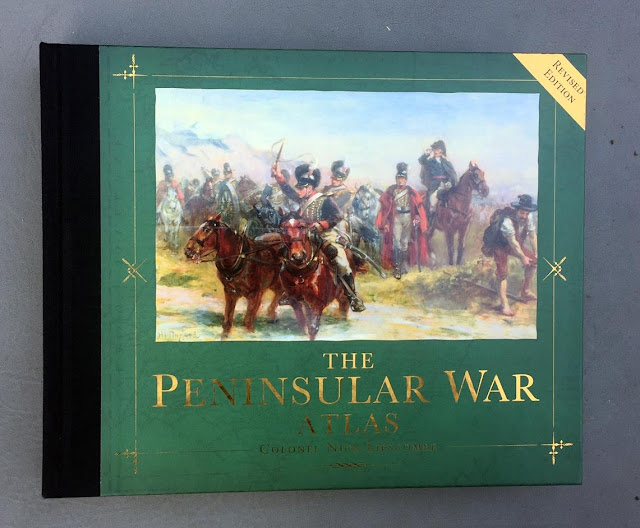 I am planning on running a Peninsular War Snappy Nappy "Campaign in a Day" at Historicon 2018 in Lancaster, PA, and figured this would be an invaluable reference. 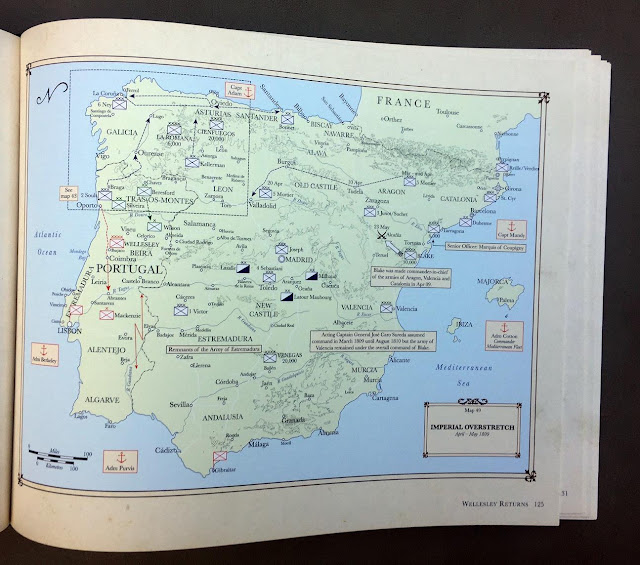 Late 1809 would involve rivalries among the Marshalate, independent Spanish army forces, Guerrillas, some Portuguese, and of course the British. 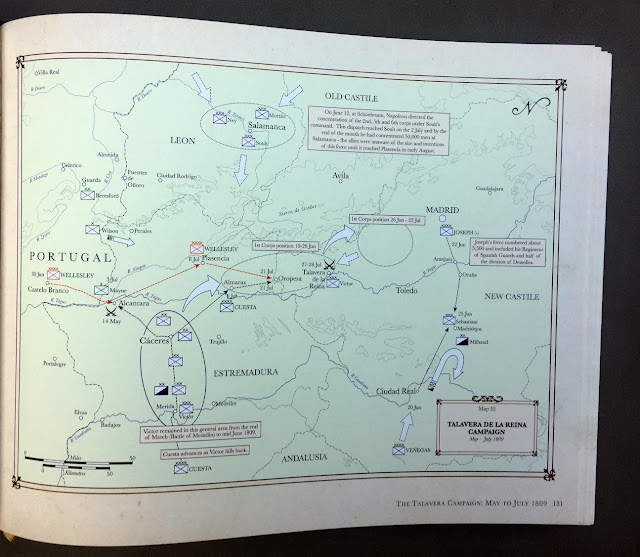 Wellesley's landing in Portugal and the subsequent Talavera campaign of 1809 are a reasonable candidate; those plans yet to be finalized . 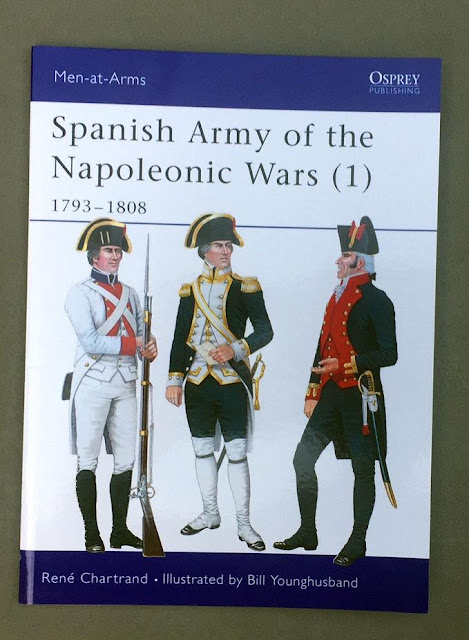 Somewhat to my surprise, this book, which I have been trying to get for years, was in print and available, so I snapped it up, too. 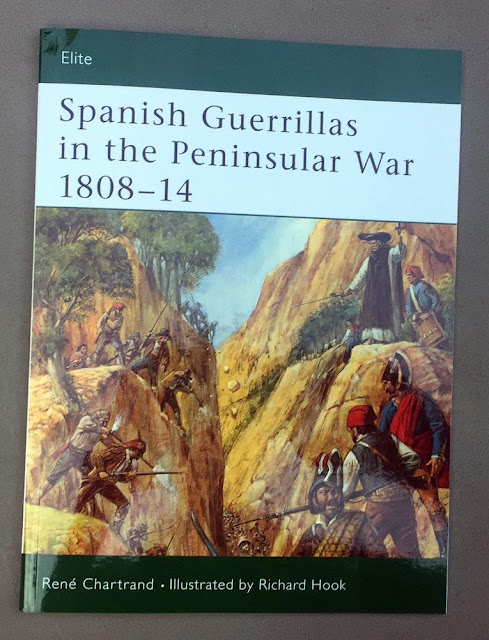 If you're going to do Spain, you have to have at least a few Guerillas! 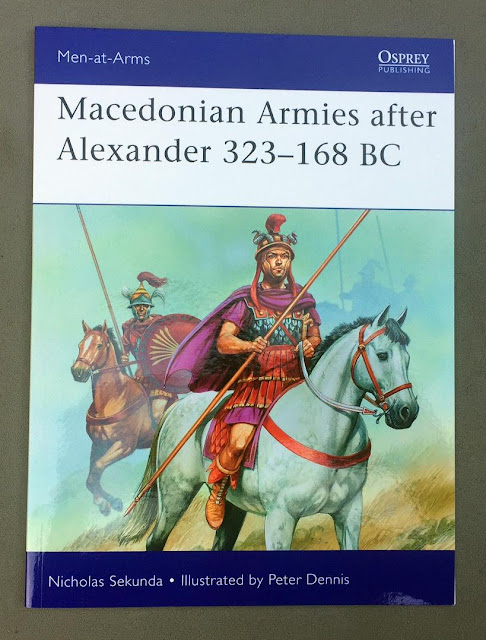 I needed a 4th book for free shipping (and with the weight of that Atlas, free shipping was a must), so I picked up some inspiration for my 200+ unpainted Macedonian figures. 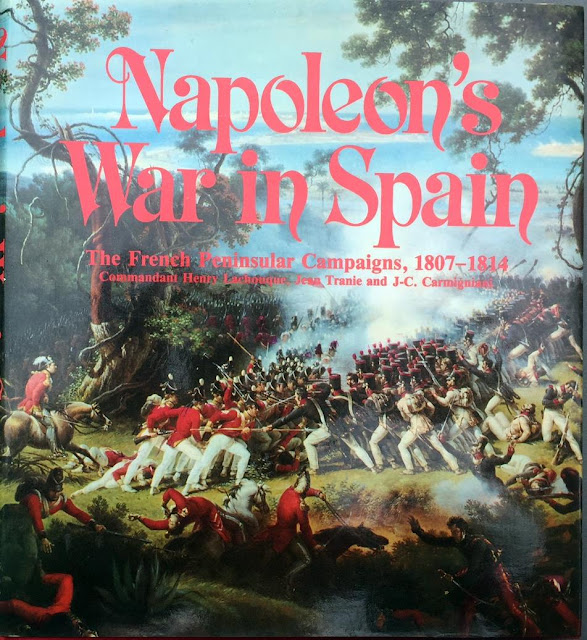 Another useful book I picked up many years ago, the story told more from the French perspective. 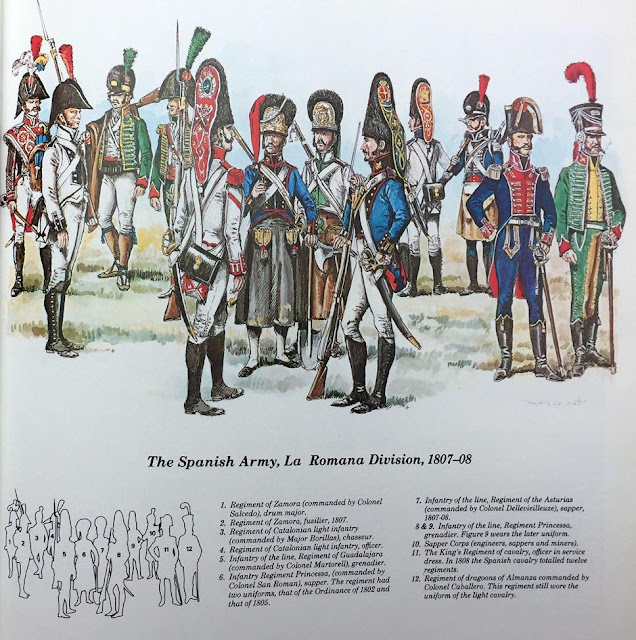 One of the four plates in the book covering the Spanish. 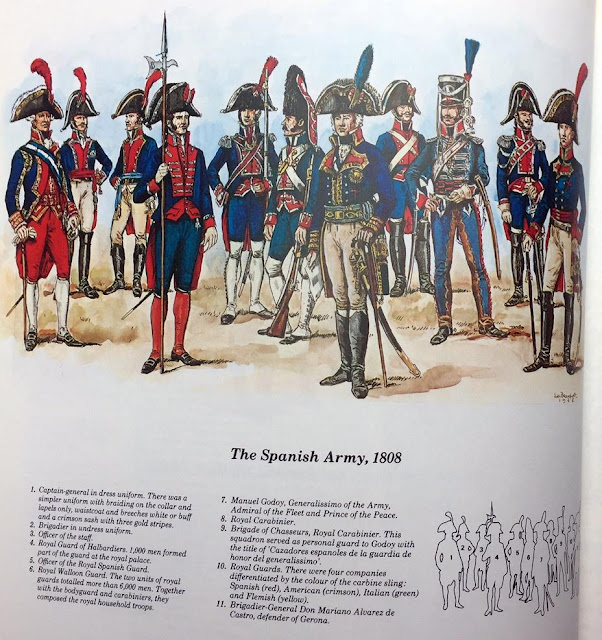 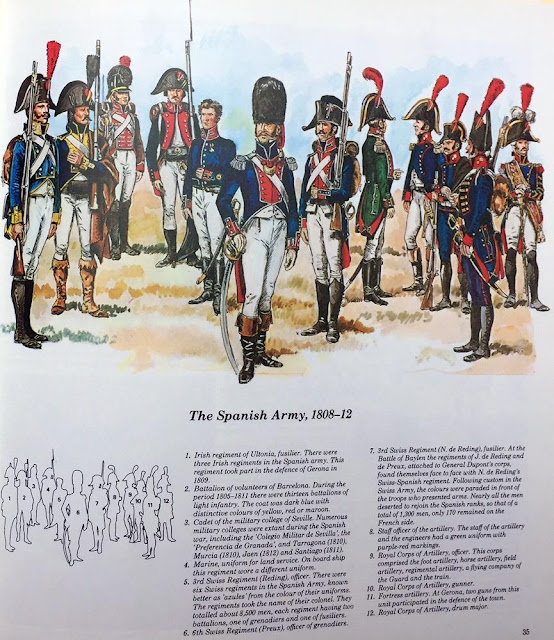 #3 out of 4 cpvering the Sopanish; the book includes may more plates covering the French, French Allies, British, and Portuguese troops. 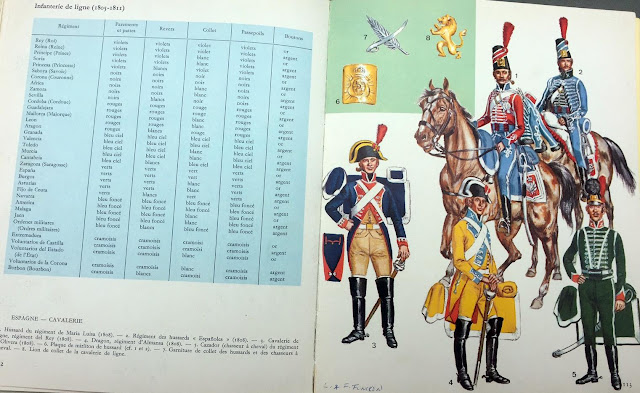 Most of the information in my vintage 1969 French language Funken books holds up reasonably well, also (that in volume 2). 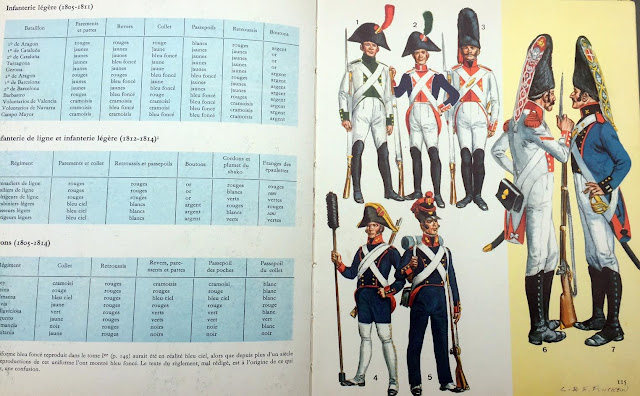 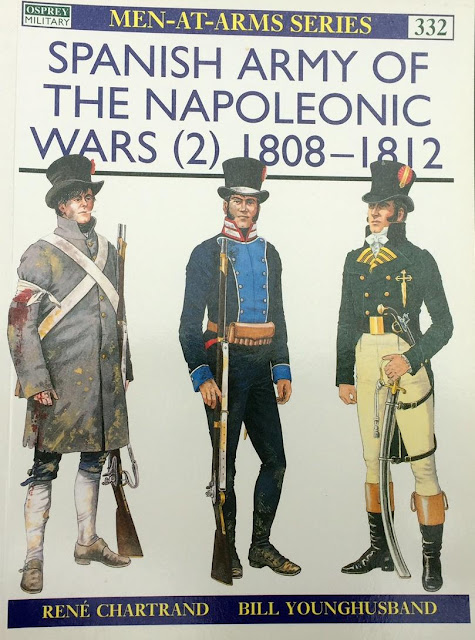 I already had this book, and also volume 3, covering 1813 - 1814. I also will need to pick up at least 2 volumes of Sir Charles Oman's History of the Peninsular War as well.

My present plans for my Spanish Napoleonic army (recalling that I call my units "regiments") are:

8 Line Infantry Regiments
One each of which will be Swiss and Irish. I have 4 units on the painting table right now, acquired from Miniaturas Dos de Mayo a few years back. IO have lead for two more from Brigade Games, purchased at Historicon in July. Eventually I will buy lead for the bother two, possible Brigade Games or Three Armies for those.

2 Militia Infantry Regiments
All lead on hand from Brigade Games purchase at Historicon.

1 Grenadier Unit
24 figures on hand from Front Rank purchase in 2009, enough for one company from each of the 8 Line outfits. That way I can field 2 smaller, 12 figure units if needed. They of course wear the spectacular bearskins!

1 Unit of Guerrillas
This may well be done as 2 small "units" of 12 figures each.

2 - 3 Units of Light Cavalry
Possibilities include Garochistas Lancers, Hussars, and Cazadores a Caballo. No lead on hand.

3 - 4 Artillery Batteries
Lead on Hand from Brigade Games for 2 batteries minus guns. One will presumably be a 12 lber Foot battery

Command for the above
Have 2 figures from brigade games; extra cavalry officers will likely become Generals and/or ADC's (I use 8 figure regiments and Brigade Games cavalry figures come 3 per pack).

TOTAL: roughly 264 infantry, 56 Cavalry, 26 crew, 8 Guns, 10 - 16 staff. I plan to have them all done by July for Historicon, and will doubtless run a tactical Peninsular War battle there in 2018, too. I have plenty of British and Portuguese painted already, not to mention French and French allies.