Assyrian Light cavalry... and a BTD "everything" Flash Sale!

Just completed are some Assyrian Light cavalry figures I bought from Black Tree Designs during their post Christmas sale last year. These are the first cavalry from BTD that I have painted, and they are very nicely done. 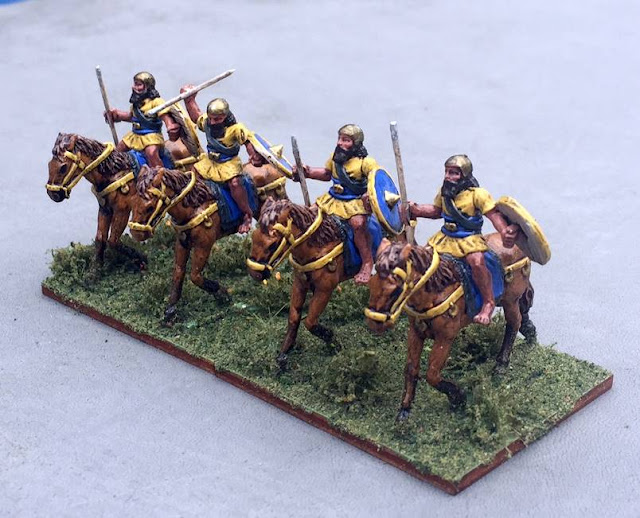 This first unit has a Yellow/blue color scheme. 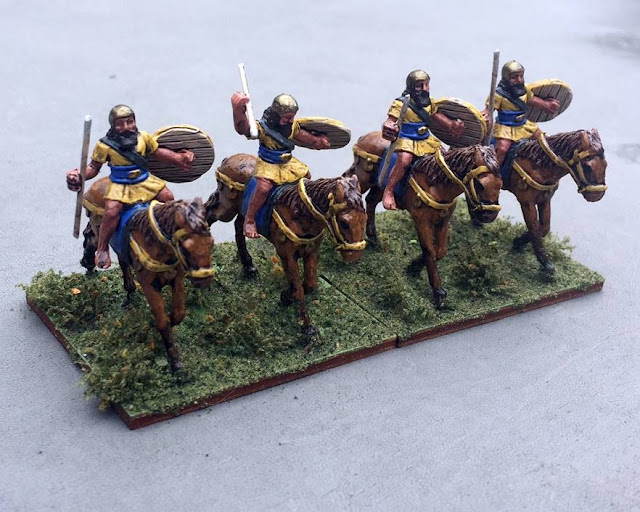 The BTD horses are very nice.... and also very large! 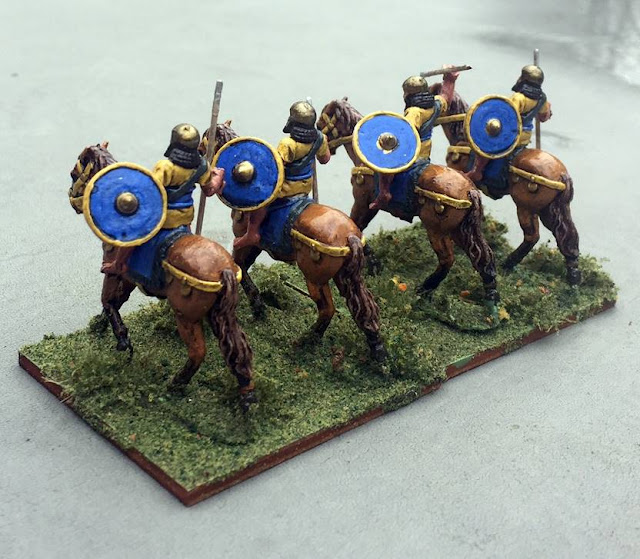 The size of the horses is probably part of why their cavalry doesn't go on sale very often. 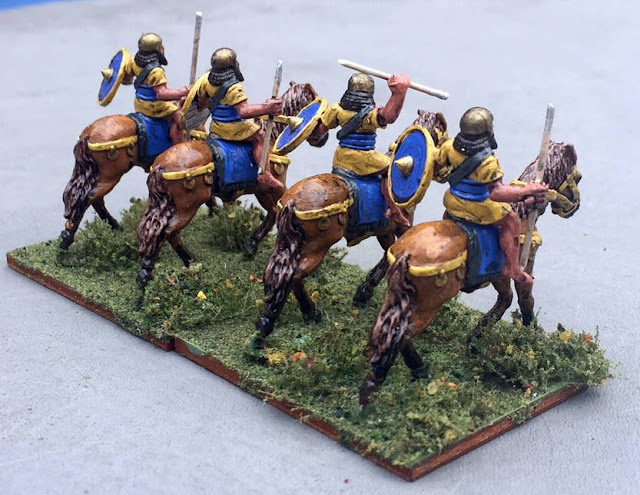 The dark "Magic Wash" really worked well on these figures to pick up the details in the sculpting. 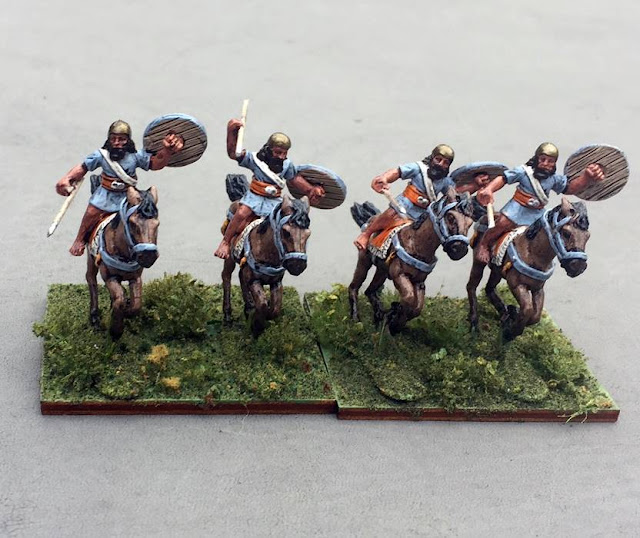 Third figure to the right must have taken an arrow to his horse. Not sure how he got bent over that far, but since corrected! 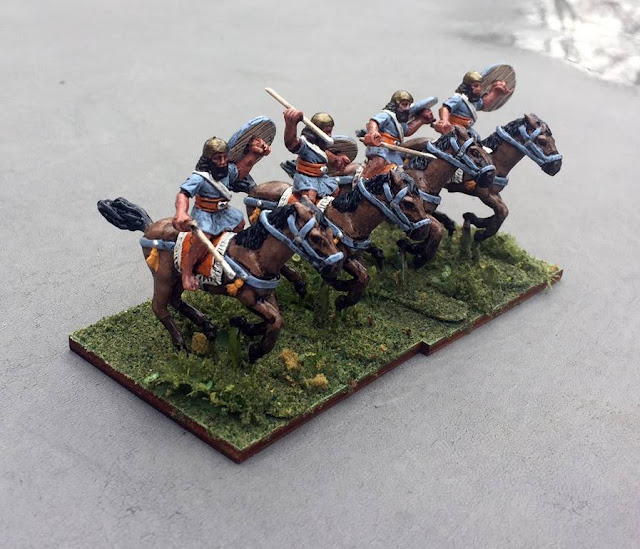 The horses in this unit have a very dynamic pose - but you can see how bending might easily occur with the two front legs in the air! 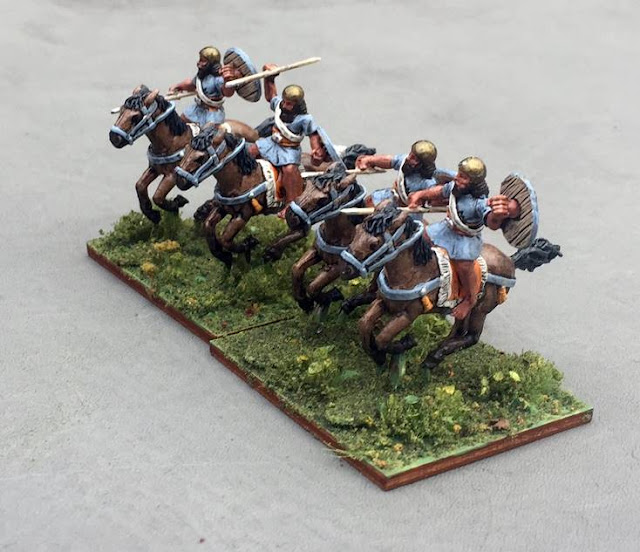 A blue-grey, orange, and white/silver color scheme for this lot. 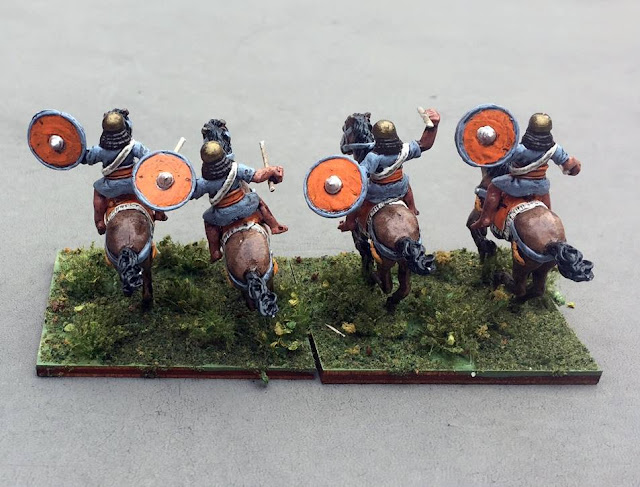 I used some "weed tufts" on these bases... more on that anon! 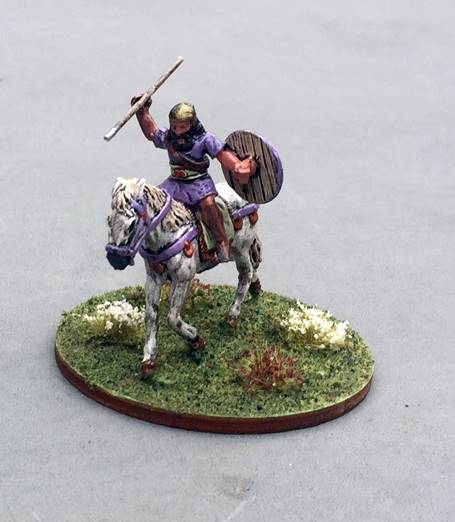 BTD cavalry come 3 to a pack, and I only needed 8 figures for these 2 units, the spare one was mounted singly as a Leader of Hero for use in To the Strongest! 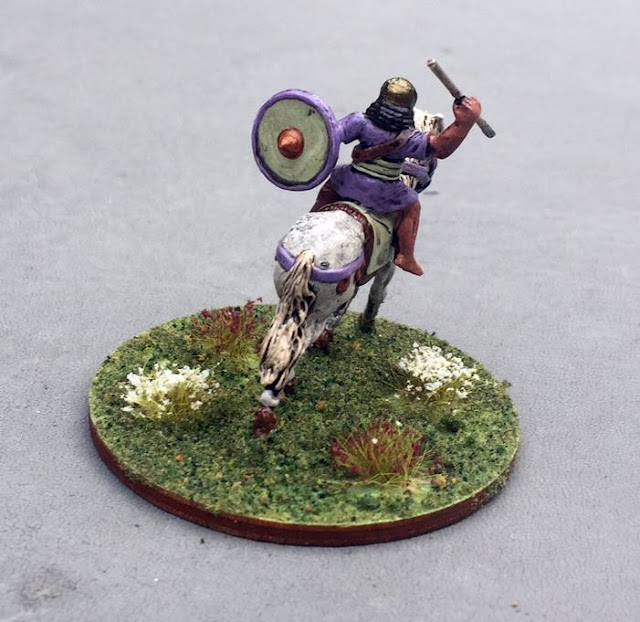 Some new flowering tufts adorn his base.

In case you don't get their email news, Black Tree Designs has a very short lived sale on just about everything at 30% off:

From now until midnight Thursday we have sales across the board. 30% or more Off pretty much anything that isn't a Dragon!

Come on over but be quick!

Maybe Jon needs some Assyrian cavalry to add to his marvelous Chariots, and perhaps now is the time for Jake to start his own Egyptian Chariot collection, eh?
Posted by Gonsalvo at 8:53 AM 21 comments:


... but first we have the last pair of the refurbished chariots to inspect up close! 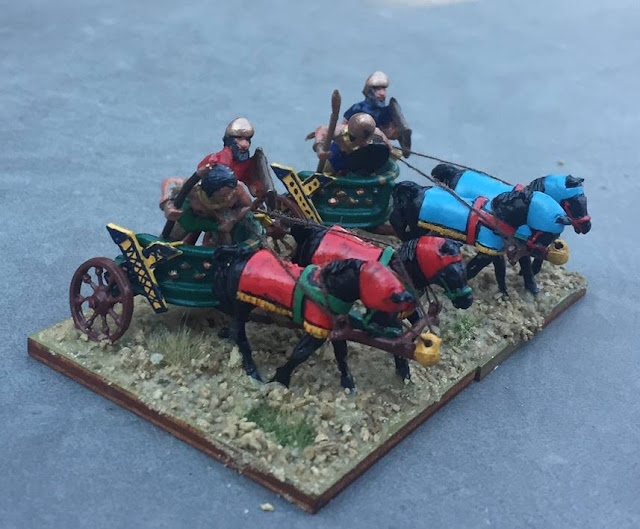 These were the best painted of the set, and required the least work. 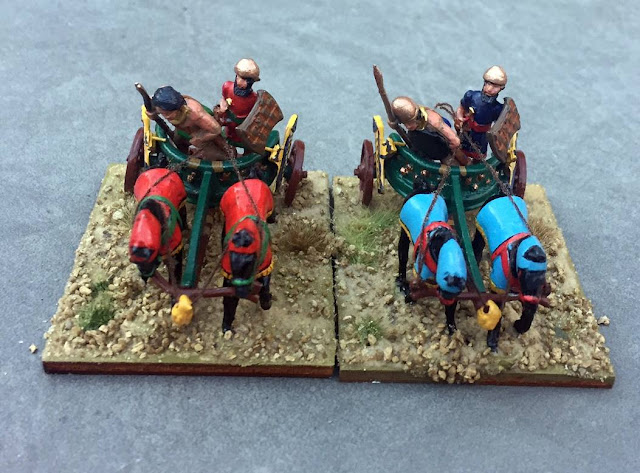 The reins made from dark brown thread were part of the original models as received as well. 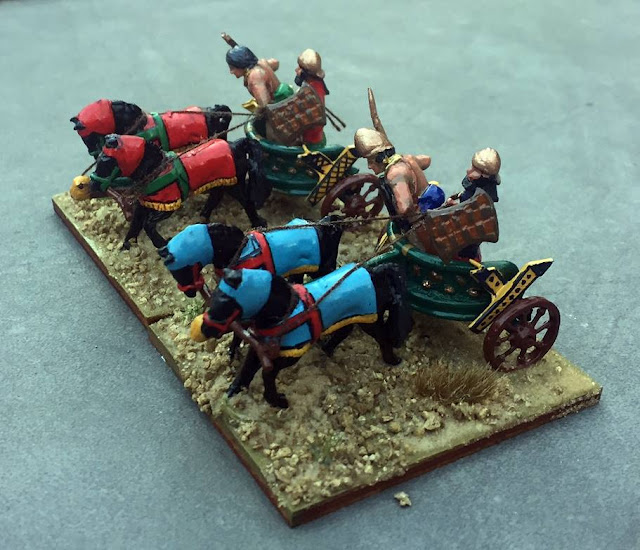 The nice detailing on the quivers mounted on the cabs was also part of the original paint job. 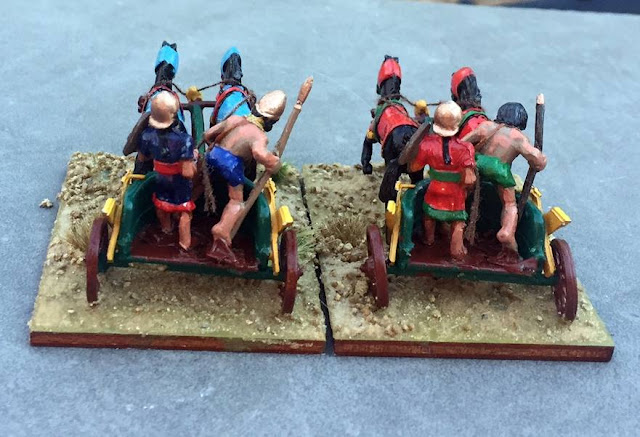 Most of the touch up on these was on the crew. 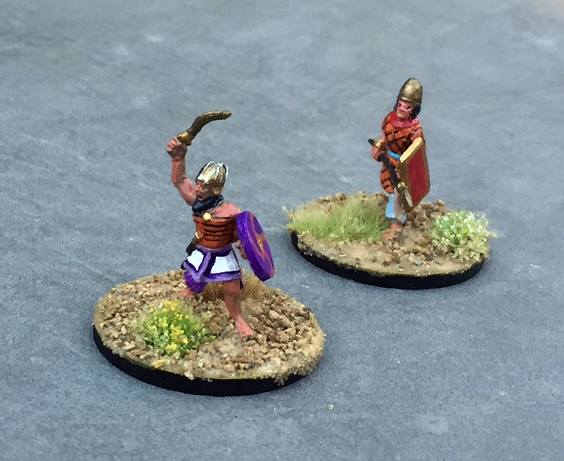 A pair of Leaders, from bare lead supplied by Ken. 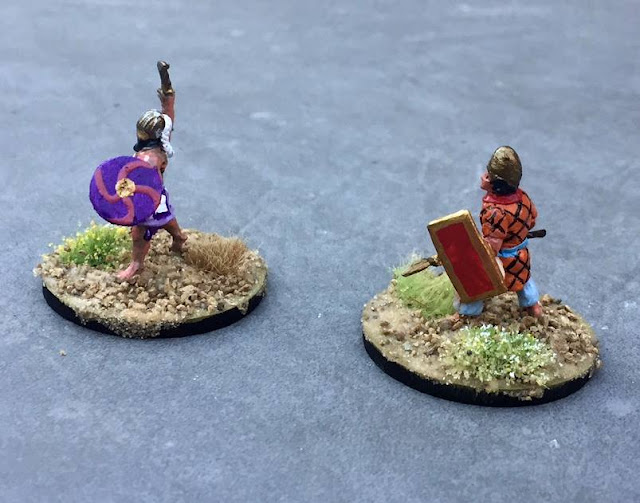 The purple shield was another wood disc substitute. 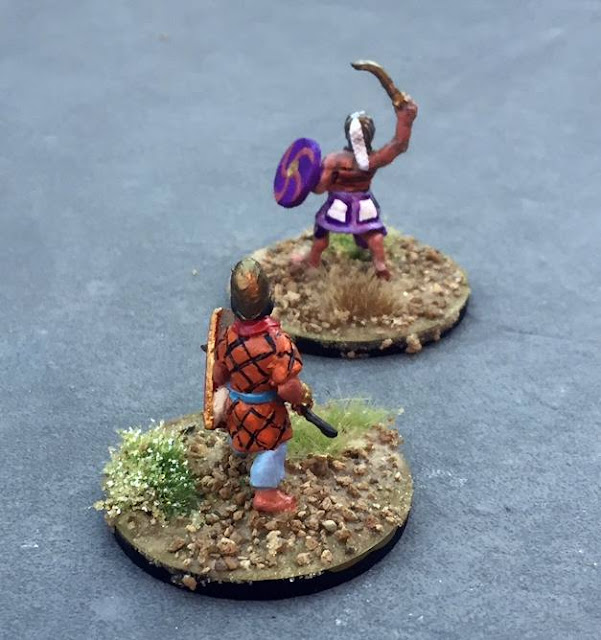 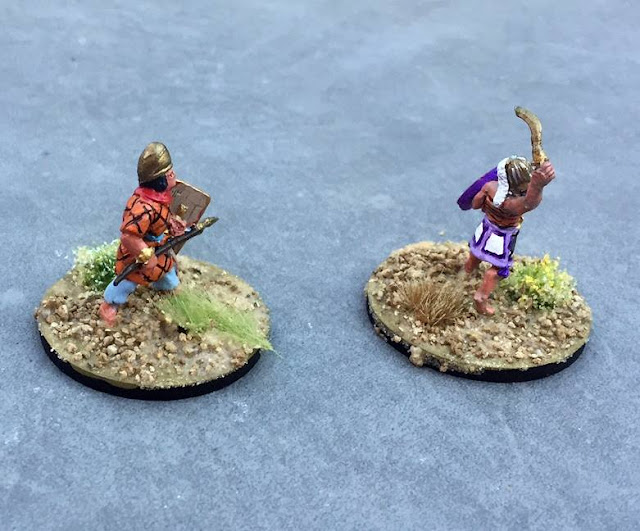 and in purple for the other figure. 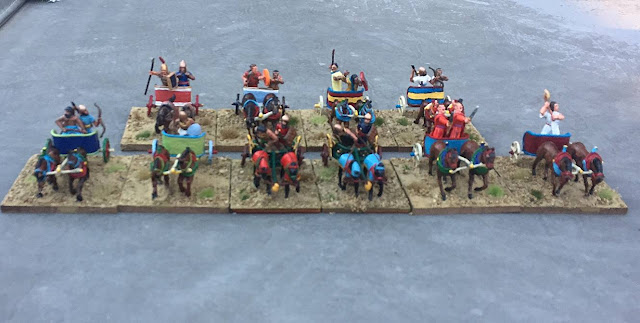 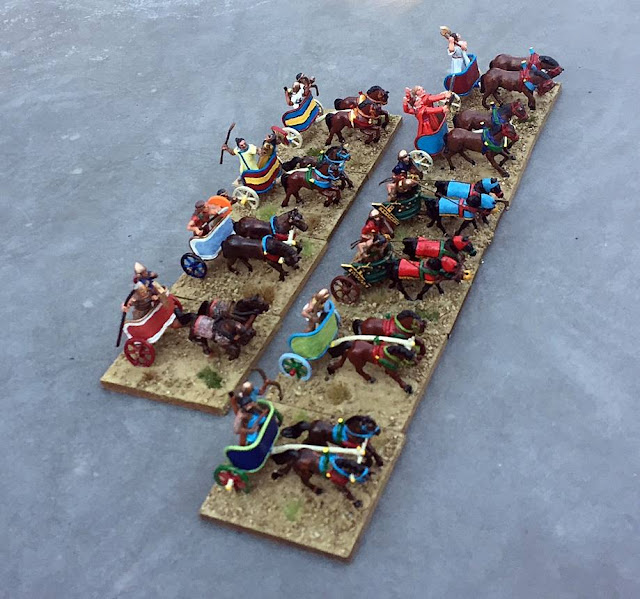 This side view give a better idea of their diversity! 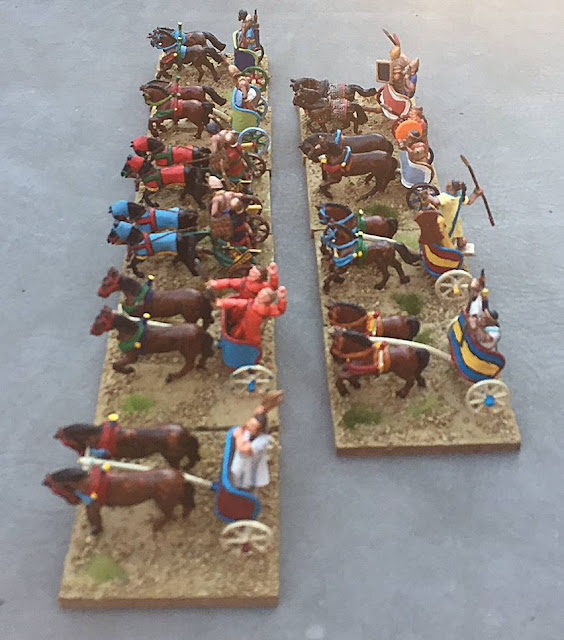 A bit of a fuzzy shot, but still impressive. The Canaanite Rehab project is completed! 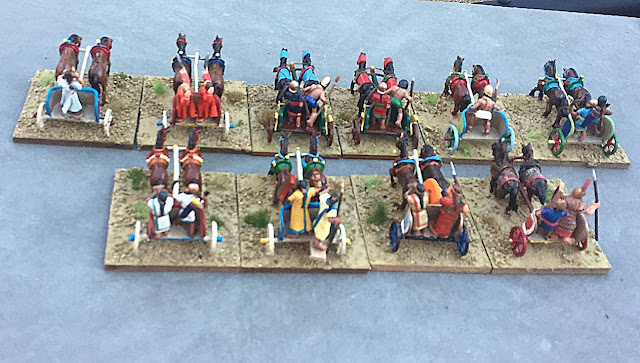 Rear view... minus the abundant supply of ruts and horse droppings likely to have been left in their wake!

I will be running this game at the HAVOC convention, held each Spring by Battle Group Boston in Shrewsbury, MA, on Sunday April 2nd, from 10 AM to 4 PM. This scenario was adapted from that for  Volley and Bayonet, by Martin Soilleux-Cardwell. George Nafziger's Napoleon at Dresden: The Battles of August 1813 was also a vital reference. The background to battle is covered there as well as in the aforementioned scenario's notes and also the Wikipedia article on the battle, so I won't repeat that information here. In brief, this battle occurred as Oudinot's force of 4 Army Corps was advancing on Berlin, around the same time as the Battles of Dresden, Katzbach, and Kulm. The usual troop ratio for Snappy Nappy per stand is  1 Infantry = 2000, 1 Cavalry = 750, 1 Artillery = 24 guns. For this battle I zoomed in 1 level, thus  1 Infantry stand = 1,000 1 Cavalry stand = 400, and 1 Artillery stand = 12 guns. Infantry and Cavalry units usually have two stands, Artillery only one. 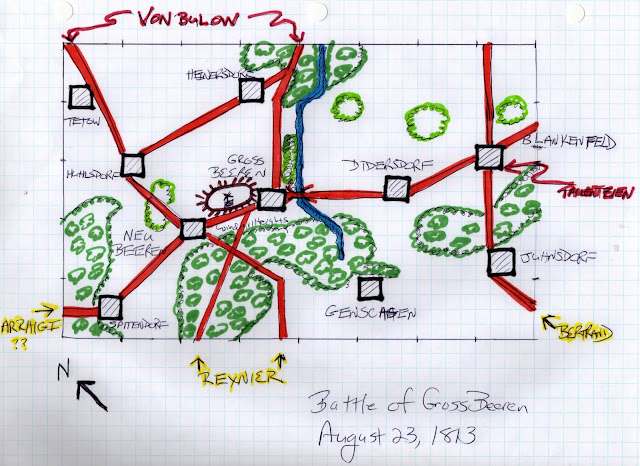 Terrain Notes:
Stream is marshy banked and up to 6 feet deep, counts as Rough Terrain to cross.
The large dark green woods count as Severe terrain, the smaller light green forests as Rough.
The Windmill Height is Broken ground.
The building all represent Villages, except Gross Beeren, which counts as a Town.

Victory Conditions:
Game last 12 turns. At the end of the game, if either side hold both Gross Beeren and the Windmill Height with at least one infantry unit of Nervous status or better, they score a Major Victory, Decisive if there are at least 50% more enemy units than friendly units routed (removed from play) or retreated off the table. If neither side controls both features, but one side still has 50% more enemy than friendly units routed or retreated off the table, they score a Minor victory. Any other outcome is a draw.

Bertrand starts deployed along Junsburg road, up to 8" on and within 6" either side of the road.

Reynier starts at the Southern Table edges on the two roads to Gross Beeren, in March Columns, up to 16" on and 4" either side of the roads.

Arrrighi's Cavalry Corps starts off the board. At the start of each turn the French side rolls two D10's - if the sum of the dice is less than or equal to the current turn number, then Arrighi arrives at the Spittendorf road, up to 6" onto the table, in March Columns.

Tauentzien starts deployed within 12" of Blankenfeld. His troops positions may be adjusted within that radius  *after* the player sees the dispositions of Bertrand's troops.

von Bulow (2 players) starts with the one stand unit of Jagers in Gross Beeren (which counts as in command as long as it stays in the Town regardless of distance from von Bulow). Half the Corps enters in March column along the Teltow and Heinersdorf roads, respectively, up to 8" on the table and 8" either side of the road. They may not move on the first tun of the game (historically, their arrival was much later.