There was a short lived 22nd Regiment of Dragoons (also called Lord Montjoy's Dragoons) from 1716 - 1718, but the first instance of a 22nd Light Dragoon regiment was in 1779, but was later disbanded in 1783, with the end of the American Revolutionary War and associated conflicts. A new 22nd regiment was raised in 1794. This unit saw service in Ireland and Egypt. It was disbanded in 1802 with the peace of Amiens, but the then 25th Regiment of Light Dragoons was promptly renumbered as the 22nd.  The former 25th had been raised for service in India in 1794, and had also been dispatched to Capetown, South Africa. This new 22nd Light Dragoon regiment served throughout the Napoleonic wars, being disbanded in 1818. It remained chiefly in India, but took place in the expedition to Java in 1811. The 22nd Light Dragoons were awarded the Battle Honor "Seringapatam". There would not be another 22nd regiment until World War 2, when an armored regiment of that number existed from 1940 - 1945. 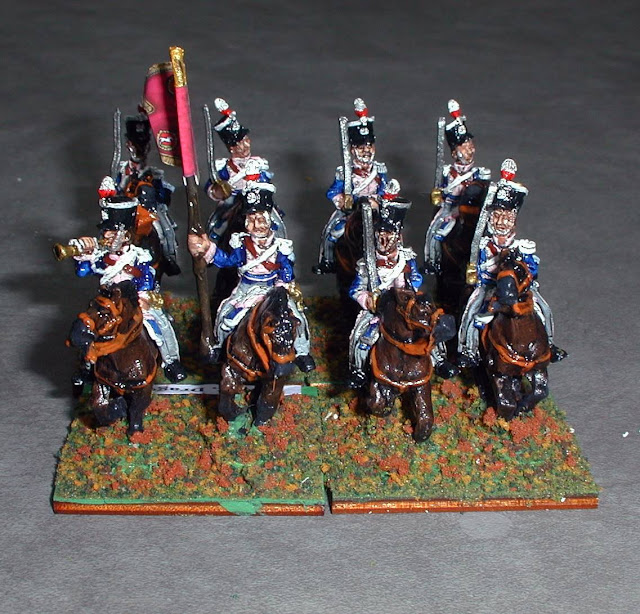 This is the last of the three Light Dragoon regiments painted this month. I have once again painted the Regiment in their post 1812 uniforms. Their facing color was to be pink, as seen here. Evidently, this color was not a popular choice. The officers in particular seem to have resisted it, and it was noted on inspection in Bangalore in 1815 that the men were in the regulation uniform, but the officers, "being unable to obtain 'peach blossom' colored cloth" in India, were wearing red facings instead. Later that year , the regiment was given permission to adopt White facings at the next uniform re- issue instead. 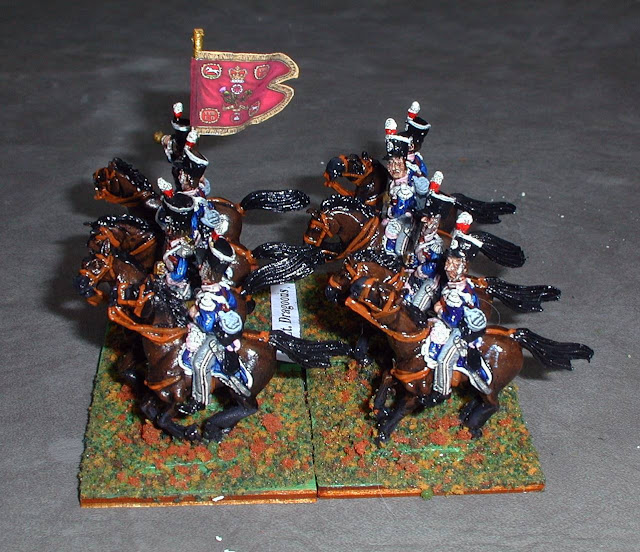 Flag is the crimson colored King's color of the 23rd (by GMB), pressed into service by the 22nd here. The flags are identical aside from the XXIII in the cartouche as opposed to XXII!  Figures are once again 25/28mm Old Glory. 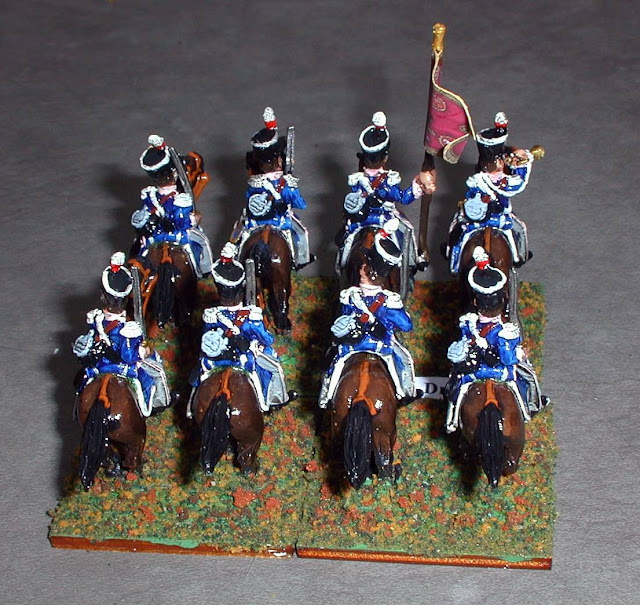 The other Pink faced British Light Dragoon unit, the 21st Light Dragoons, also were slow to adopt the new color. In 1814 they were authorized to change to black facings, first with silver and then later gold lace. I happen to think the pink facings look great with the dark blue coats. 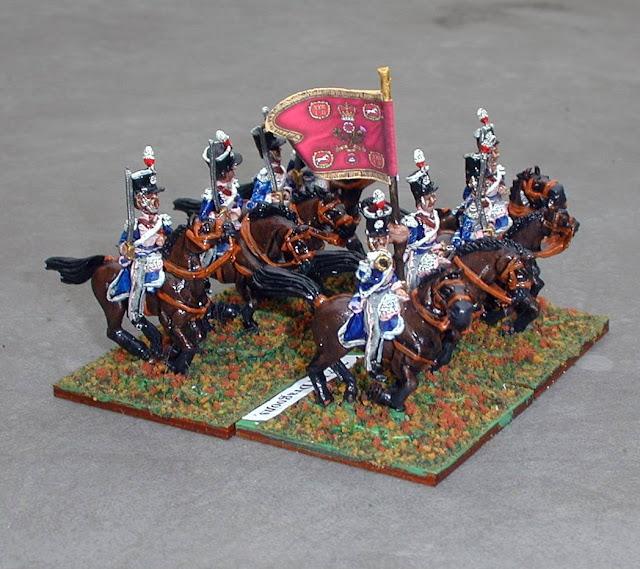 Certainly, there was no protest by the French cavalry units with pink facings - 6 Dragoon regiments, 3 Cuirassier regiments, 3 Chasseur regiments, and of course the chevau legers/lancer of Berg! So, sorry, men of the 22nd, but in this man's army you are struck with the Pink facings for ever more! :)

British Light Dragoon Distinctions, 1803 - 1811
(Facing colors worn on the collars and cuffs)
The 9th, 11th, and 13th regiments had buff breeches instead of the usual white ones.
Another source shows the 23rd with Crimson facings.

The origins of this regiment date back to 1715, when it was raised as a regiment of Dragoons (Richard Munden's regiment). It became the 13th regiment of Cavalry (Dragoons) in 1751.  Light cavalry were a relatively late addition to the British army, first being raised as supernumerary troops to existing Cavalry regiments. They soon proved their worth, and the first full regiment of Light Dragoons was raised in 1746 (the 15th). The 13th was converted to Light Dragoons in 1786 (becoming the third regiment of Light Cavalry in the British army at that time).  They became the 13th Hussars in 1861, and were amalgamated with the 18th Hussars in 1922, forming the 13th/18th Royal Hussars (Queen Mary's Own), and further amalgamated with the 15th/19th King's Hussars in 1992 to for The Light Dragoons. 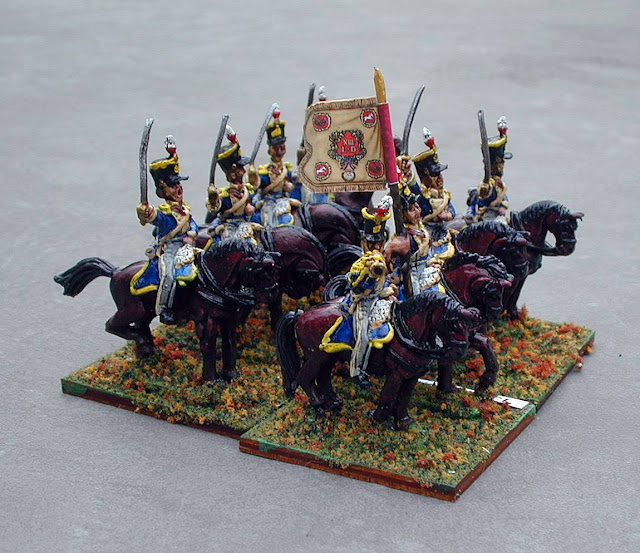 The 13th regiment participated in the Peninsular War from 1810 - 1814, and the 100 Days campaign, winning battle honors for Albuhera, Vittoria, Orthes, Toulouse, Peninsula,  and Waterloo. The 13th also participated in the Crimean War, winning battle honors for Alma, Balaklava, Inkerman, Sevastopol; the regiment was part of the infamous "Charge of the Light Brigade". The motto of the regiment is Viret in aeternum (It Flourishes Forever). 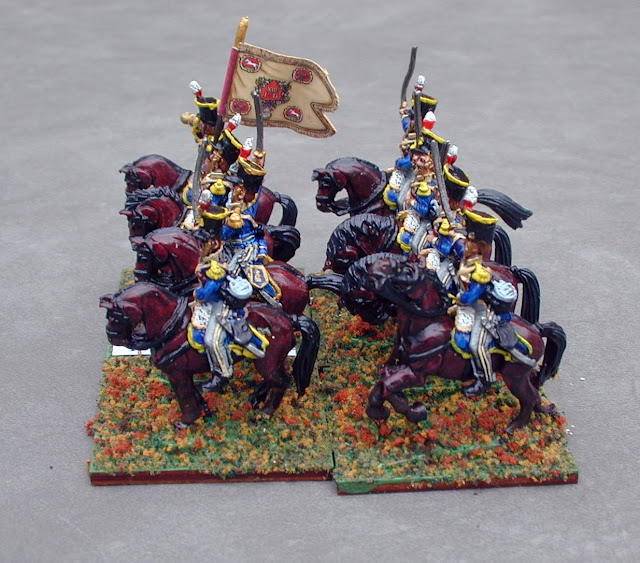 The Regiment participated in a controversial incident at Campo Mayor in March, 1811. The following account is from The British Empire website


The battle of Campo Mayor near Badajoz was a fine example of the bravery of the 13th Light Dragoons during the Peninsula War, but instead of being showered with honour and glory they found themselves taking the blame for the failings of Field Marshal Sir William Carr Beresford, Brigadier Long and the obstinate Wellington.

Campo Mayor is a fortified town in Portugal 20km northwest of Badajoz which is just over the border, in Spain. It was under siege by the French and Beresford's force was detached to relieve it. As his allied force advanced they were unaware that Campo Mayor had surrendered and was in French hands. The plan was to position the British/Portuguese force between Campo Mayor and Badajoz but the French anticipated this and were in the process of abandoning Campo Mayor to consolidate their force at Badajoz. Brigadier Long, in command of the cavalry, was ordered to detain the French cavalry until the infantry arrived, and engage them if the circumstances permitted.
The 13th were brigaded with the 1st and 7th Portuguese Cavalry Regiments and were ordered to proceed towards Campo Major over stony ground until they came in sight of the town 1,200 yards away. On the plain in front of the town was the French cavalry made up of the 26th Dragoons (150 men) plus some hussars and others. The two and half squadrons of the 13th LD (220 men) were with 5 small squadrons of Portuguese cavalry. Also present were the 8 squadrons of British heavy cavalry; 3rd Dragoon Guards and 4th Dragoons. Throughout the action these two regiments were ordered by Long to sit and wait.
The 13th formed into line facing the enemy with the Portuguese on their left, ordered to stay in support. The contribution made by the Portuguese was patchy; mostly they proved unreliable. The infantry were at a distance from their right flank. Lt-Col Head commanded the 13th and Long told him, "Colonel Head, there's your enemy. Attack him." adding "And now, Colonel, the heavy brigade are coming up on your rear, and if you have an opportunity give a good account of these fellows." Head replied, "By gad sir I will."

The majority of the French Hussars were occupied covering the progress of their infantry to Badajoz so the main focus of attack was the 26th French Dragoons. The two lines of cavalry charged towards each other, going through and wheeling round to charge again. The French infantry took the opportunity to open fire on the 13th causing some casualties. The commander of the French Dragoons was Colonel Count Chamorin. He saw one of his men killed by Corporal Logan and engaged him in combat but Logan was skillful and cut at the colonel's face, knocking his helmet off and finishing him with a downward cut to cleave his skull. Much later, after the battle, the Count's brother found the dead body, stripped bare by local peasants and with mutilated head. He threw himself on the corpse and sobbed uncontrollably. Logan sold the helmet to his regimental paymaster and the Count's sword was presented to Colonel Head.

As the 13th had by this time come within range of the enemy guns in Badajoz, they returned to Campo Mayor, losing some men to the firing from the city. They brought their captured men and supplies along the road but were met by a messenger who informed Col Head that they were about to confront the French infantry and hussars who had been proceeding towards Badajoz. He at first could not believe the news, but a second trooper came with the same message so the astounded Colonel Head came to the realisation that no back-up was forthcoming and he had no alternative but to release his prisoners and abandon the captured guns and wagons. They took a detour to reach Beresford's force but were pursued by French hussars who harried them but would not be drawn into open battle. They finally arrived at the British lines at 6.30pm having been in action since 1.30pm. The casualties were 12 men and 7 horses killed. Three officers, 1 WO and a sergeant wounded along with 24 rank and file. One sergeant and 19 rank and file missing.The French Dragoons were put to flight and the 13th chased then for 10 miles towards Badajoz. Many of the dragoons threw down their swords and surrendered. There were also wagon-loads of stores and ammunition and 16 artillery pieces which were captured and had to be guarded. Col Head expected to see the British heavies coming up behind to help with bringing back the prisoners and booty but they never came. Unfortunately, Brigadier Long thought that the 13th had been defeated and either killed or captured. He was reluctant to lose his heavy cavalry as well, so he held them back. Had he sent in the cavalry and infantry at that point he could have secured a total victory because the French Cavalry had given up and were preparing to surrender.

Beresford and Long both knew they had made a serious mistake in not sending back-up to the 13th so Beresford sent a misleading report to Wellington blaming the regiment for the blunder. Upon receipt of Beresford's report Wellington issued a stunning rebuke to the 13th threatening to take away their horses. He accused them of impetuosity and lack of discipline. It must be said that Wellington was always prejudiced against cavalry and especially hated them being used for the charge. Brigadier Long however refused to allow the message to be entered into the Orderly Book and said, "I cannot find words to express my admiration of your gallantry on that occasion, your discipline was most conspicuous; in short gentlemen the 13th Dragoons have gained such a laurel on that day as will never fade."

The debate over the conduct of the 13th carried on for many years and Wellington was made aware of his error in issuing such a damning rebuke. But he simply said, "It had been issued, it must remain." He refused to retract it.

It is reported that he did concede that had he known the truth of the encounter, he would never have issued the rebuke in the first place, however. The historian Sir John Fortescue was rather more generous when he wrote, "Of the performance of Thirteenth, who did not exceed two hundred men, in defeating twice or thrice their numbers single-handed, it is difficult to speak too highly." (This from the Wikipedia article on the 13th LD/Hussars). 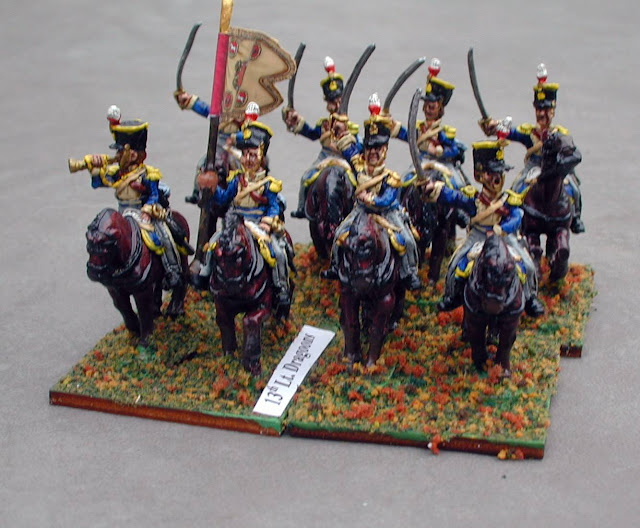 In common with the other Light Dragoon regiments with buff facings, the belts of the 13th were of buff leather. In their pre-1812 uniform (with the Tarleton helmets), the pants of such regiments were buff as well! 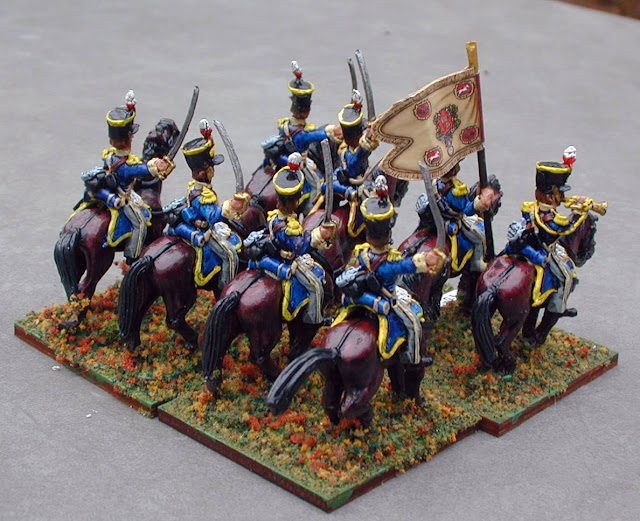 The 13th joins the 23rd Light Dragoons posted a few days ago, with the 22nd Light Dragoons (and complete tables of the Light Dragoon facing colors) to follow soon as well. Once again, Old Glory figures and GMB flags. The darker tinted version of the Magic Wash I'm using now worked especially well with these figures, I think.