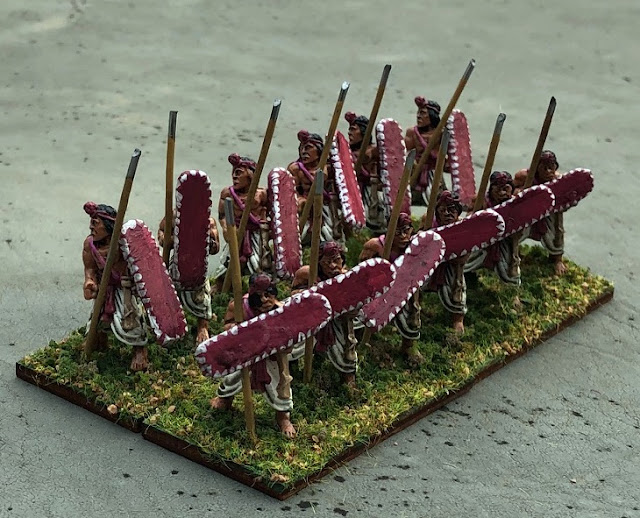 A second unit of Spearmen join the expanding ranks of my Indian army. 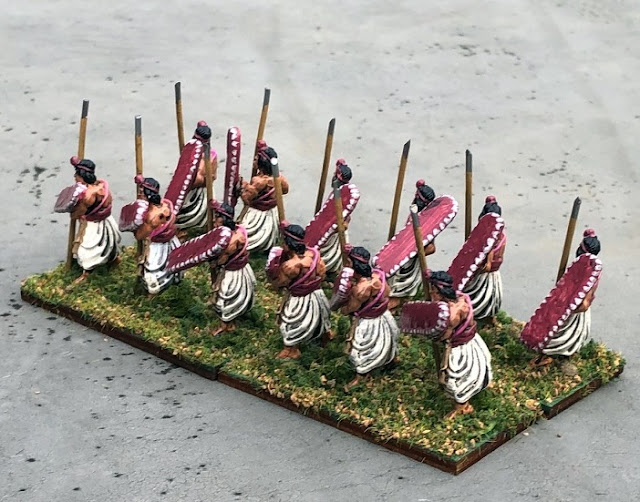 Old Glory figures once again... with the "Tiger's Teeth" om the shields. 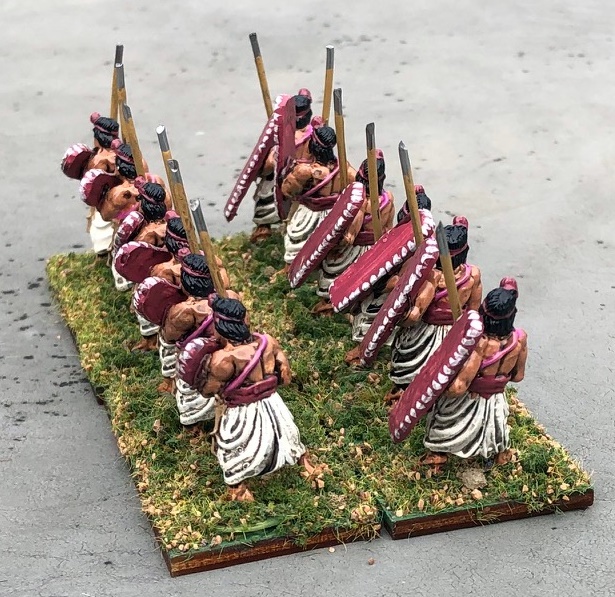 "Dusty Mauve" is the color theme for these chaps. 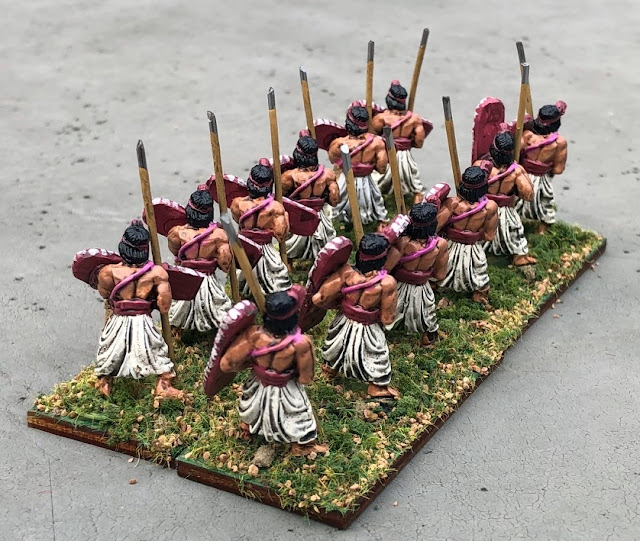 Really nice results from the Magic Wash once again. 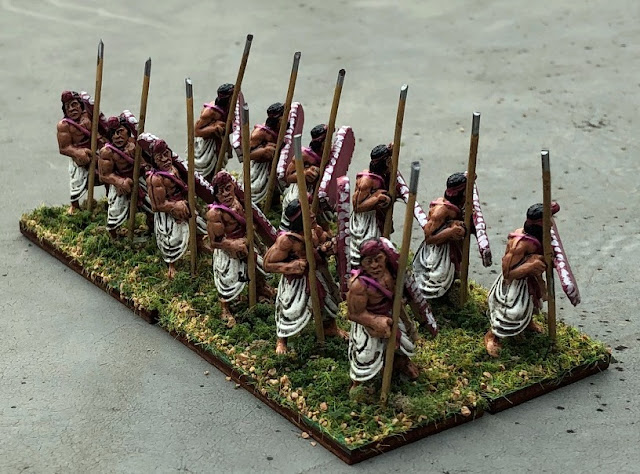 That finishes the Old Glory Infantry additions (they will be back with more Cavalry, Elephants, and Chariots later in the year), but there will be more Infantry to come shortly  from Newline Designs! 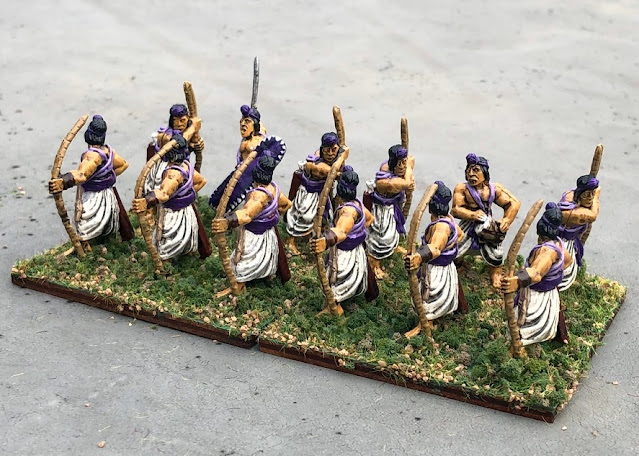 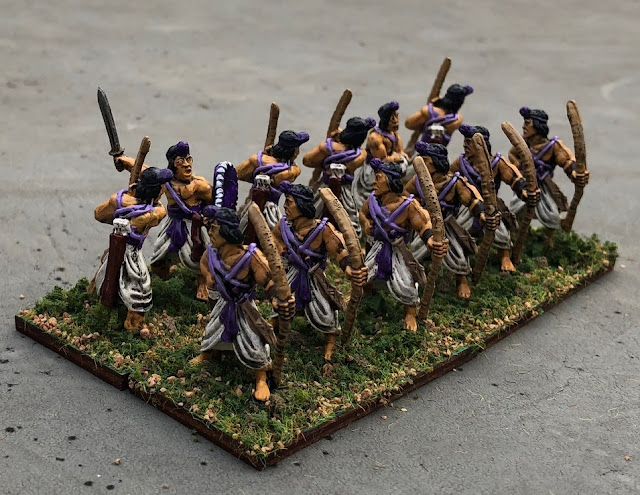 These are Old Glory figures once again. 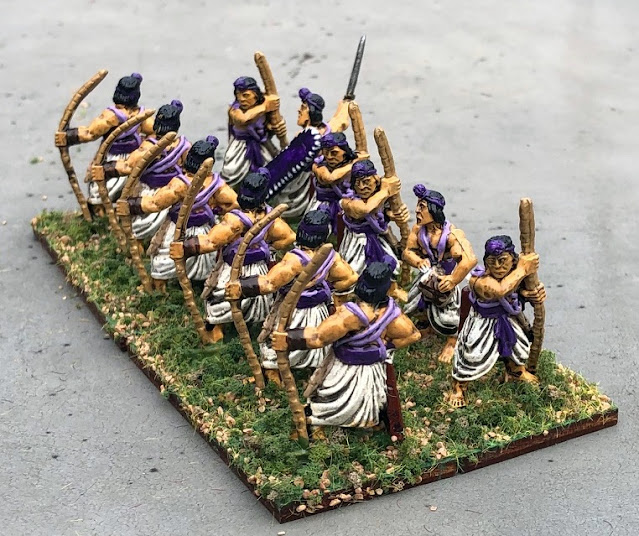 "Pretty in Purple"... including the "Command" figures ("officer" and drummer). 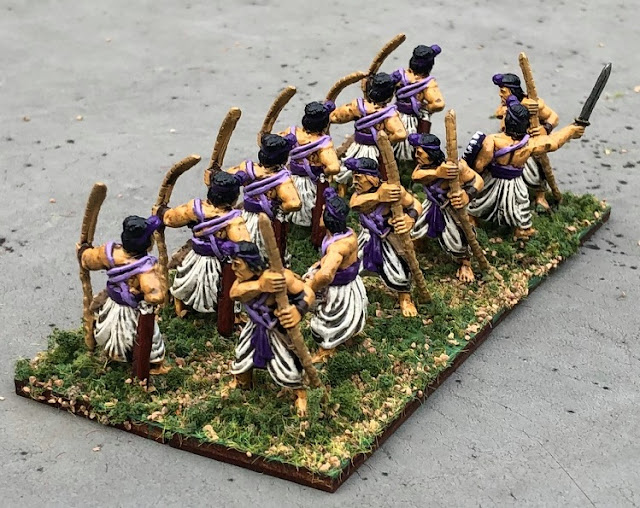 Once again these figures have taken the "Magic Wash" very well. 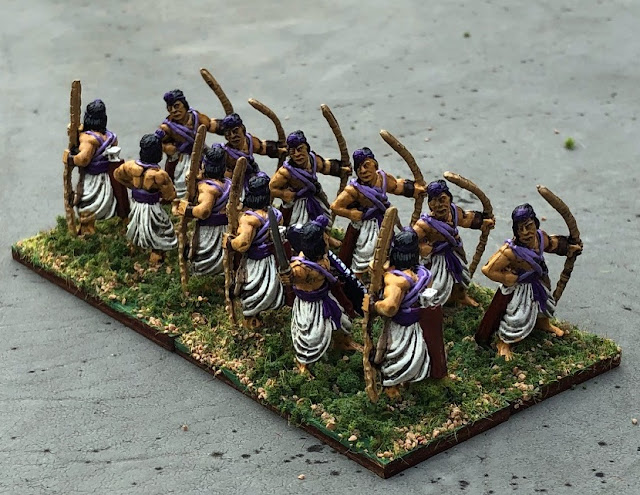 I debated some how to base the figures in the back rank, trying to decide if they were "at the ready", or perhaps stringing their bows. 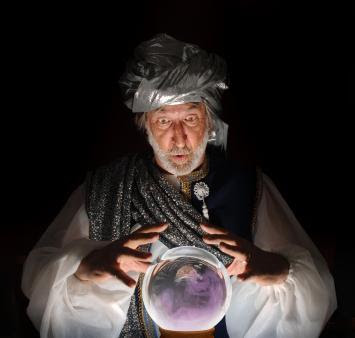 Peering in to the COVID ball, what can we see for this year?

First a little painting breakdown by Army/Period for the last 2 years:

2021 - 3,890 points
About half Napoleonics and half Ancients, with a few Renaissance/ECW troops thrown in.

Painting:
Both 2021 and 2022 were all time high years for painting; I doubt I'll be able to match them for a third year in a row. We'll aim to exceed 2400 points this year. If COVID continues to limit travel, the total could exceed 3,000 points again. Major projects are a moderate sized WoTR force for use with Test of Resolve and planned games at Historicon 2022, completing the expansion of my Mauryan Indian army, all those Wurttemburgers from the Kickstarter, and quite possible some additional Napoleonic Spaniards. I have plenty more Ancients and assorted Napoleonic's to paint any time the spirit moves me as well.
Games:
I managed 26 games last year, the most in a long time. 2 games a month on average is doing quite well - Goals is 24 games in 2022. It would be nice if HMGS would announce the Theme for Historicon 2022, though. The theme isn't usually a big factor in deciding what games to run there, but it definitely has an effect some years!
Blogging:
2021 was a record year at 116 posts here as well. Goal is 100 posts or more for 2022.
Rules:

This is the one area I fell far short in 2021. Goals there are the same or more than last year!
There at least 5 different Napoleonic rules sets in the sights - Blogger sets Eagles Cheaper than Brain Cells and 123! Napoleonics, plus a Napoleonic variant(s) for Bloody Big Battles (Jared has been using this last with his students), an updfated Morschauser set, and a playtest of Poquer when Bob Jones releases the next playtest version. .
Verbatim from last year: Several Napoleonic Age of Sail rule sets to try as well - Grand Fleet Actions in the Age of Sail and Form Line of Battle.
Also almost verbatim from last year: For my large collection of Superior Starfleet Wars/Galactic Knights ships, play at least one game with Starmada, Stars and Lasers, and Ascension of the Galaxy (from a Kickstarter).
Posted by Gonsalvo at 11:45 PM 14 comments: 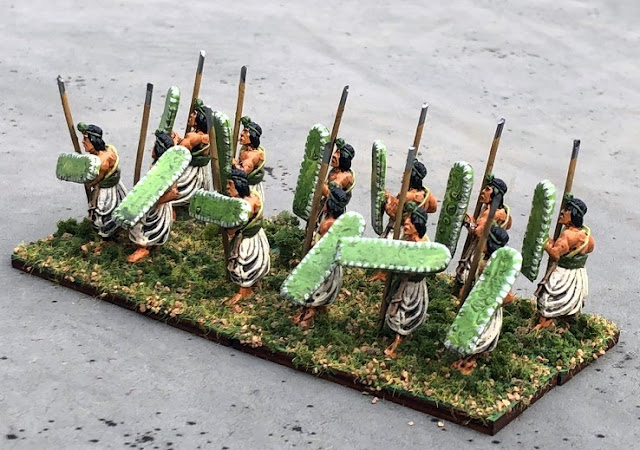 The first unit of the New Year marches off the painting table! 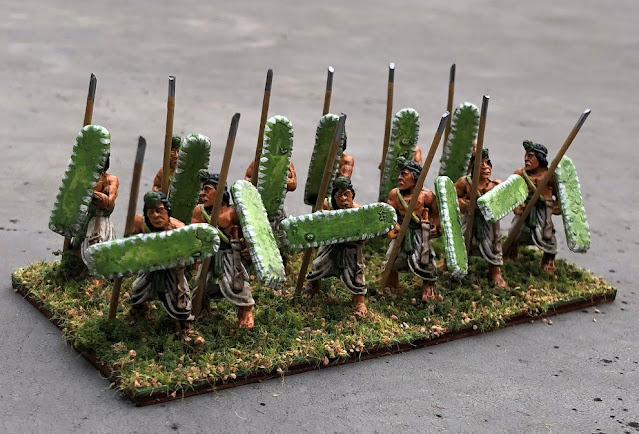 Like the Archers seen in December, these are Old Glory scuplts. 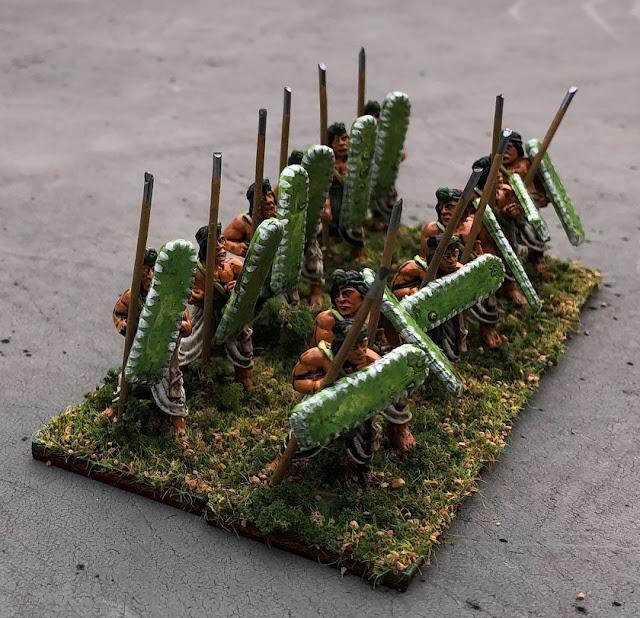 It was a bit challenging trying to figure out how the shields were meant to be held by the front rank figures! 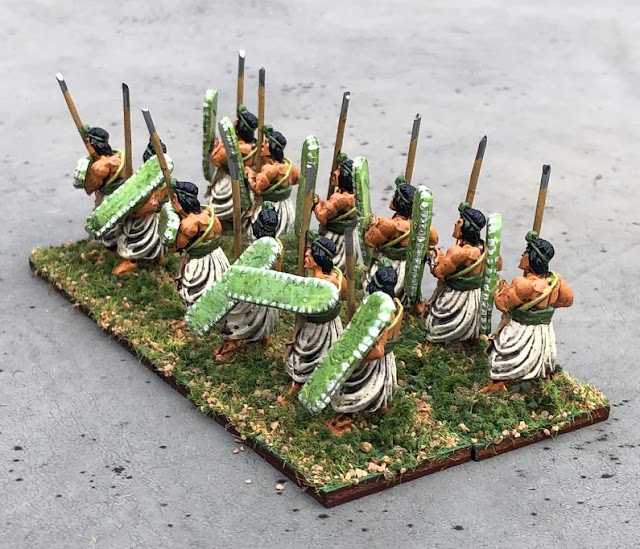 Painting the "Tiger's Teeth" on the shields was a bit tedious, but worthwhile. 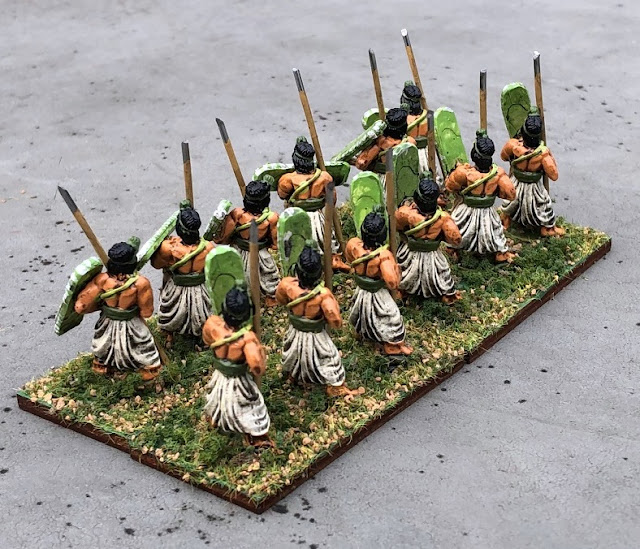 Once again the "Magic Wash" has worked well on these figures. 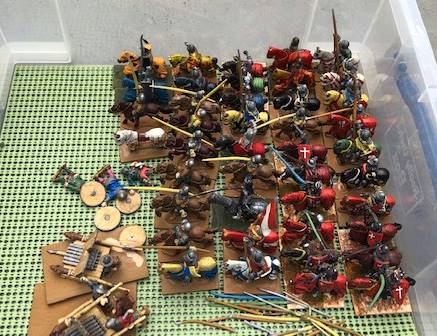 When I acquired the Sea People and Hittite figures from the collection of the late Bill McHugh, it included a bunch of his Medieval figures. 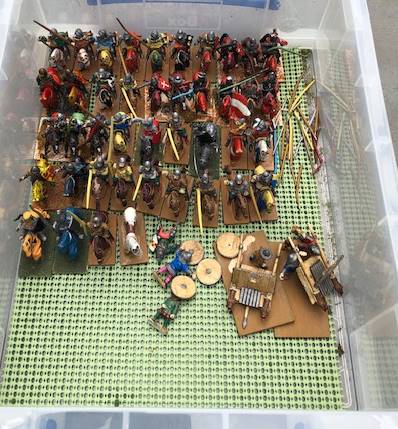 The cross country trip wasn't kind to them at all, as can be seen. About 40 Knights, 2 organ guns, and crew. Manufacturer unknown. 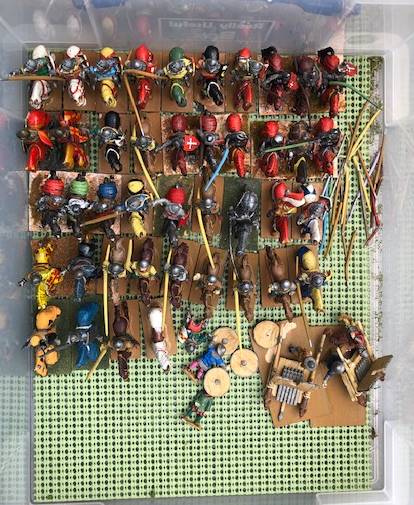 They will need considerable repair, touch up, and rebasing work to become a useful force. I have a few Medieval odds and ends gifted to me Ken Baggaley many years ago that would probably go with these as well. 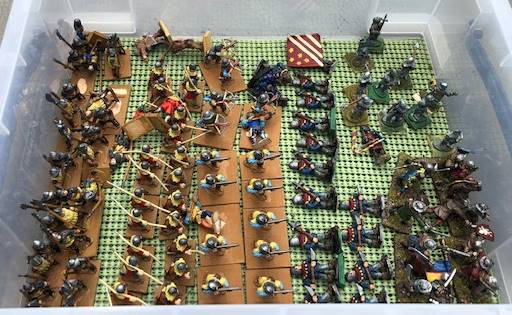 They have languished awaiting same, because, frankly, I wasn't sure what to do with them. I have no idea as to the manufacturer, either. 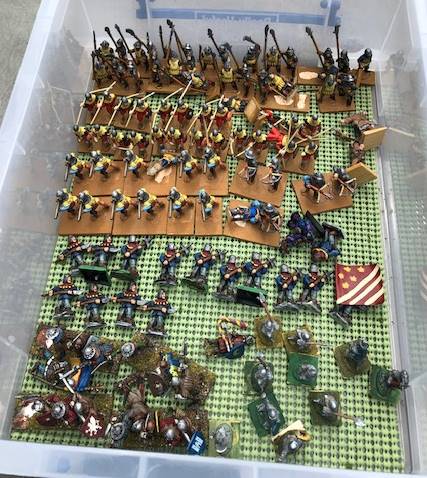 Now it seems to me that they would do passably well as HYW French, Burgundians, and even Catholic Crusaders from the Hussite Wars. 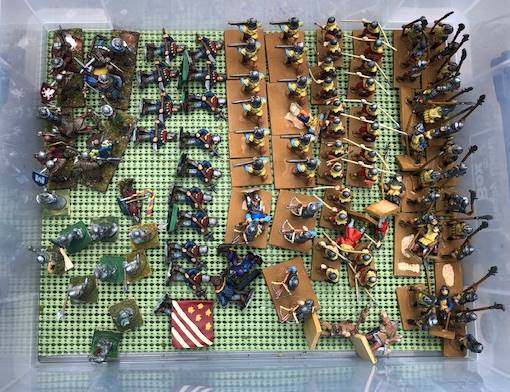 Looks like about 24 Flail men, 24 spearmen, 12 Handgunners, 6 Crossbowmen, 16 Billmen, 8 Foot Knights, and about 12 Halberdiers, plus a few odds and ends.  I definitely won't be adding these fellows to any official tallies until such work is done, though! :-)
Posted by Gonsalvo at 9:45 PM 14 comments: 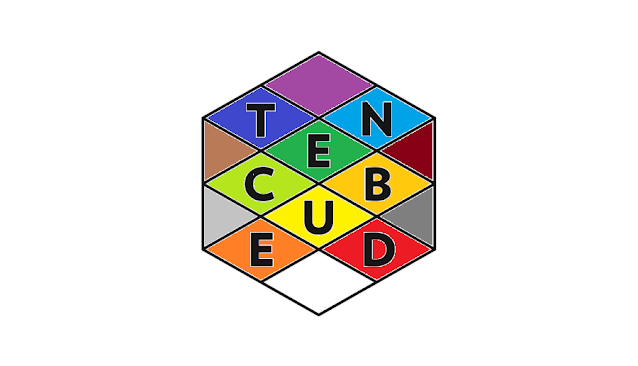 Goal:I will keep the allowance to $2000,  and hope to come in well below that. If Historicon does not take place, I should end the year well under budget.
Result: Over budget by almost 50%; since I didn't share a room, that added to the Historicon bite for 2021. Guess what?  It was well worth it! .
Painting:
Goal: I doubt I will be able to match 2020's production of over 3,700 points, but I'd like to paint at least 2000 points worth.
Result: A handful over the totals for 2020! Biggest driver was probably spending all but a few days worth of my vacation time at home due to COVID effects.

Goal 1) Add to my French and Austrian Napoleonic armies (already my largest, mind you). I have lead on hand for a LOT of Austrians and quite a few French as well. No purchases needed here!
Result: A great many Austrians painted, and quite a few French as well!
Goal 2) Some additional ECW reinforcements (Cavalry and Artillery - Old Glory, already ordered)
Result: Painted all of the Cavalry, none of the Artillery... then ordered a slew of Scots!
Goal 3) Paint newly acquired/to be acquired Chariot era additions - Peleset, Libyans, a few Egyptians, etc.
Result: All painted!
Goal 4) Add to my Mauryan Indian Army for To the Strongest! Lead already ordered. I still have some remaining lead for the Macedonian/Thracian forces.
Result:  Barely squeaked a few Indians under the wire in 2021.
Goal 5) Paint the Murawski Polish Horse Artillery and Krakus. It looks like Murawski is now planning to do the Baden Hussars, which will be a Must Buy, even if they don't get painted this year!
No progress, and no Murawski Baden Hussars in production yet either... but did I tell you about those Piano Games Wurttemburgers?
Goal 6) Maybe start on my Darkest Africa project- I have a fair amount of lead on hand for that now.
Well, I painted those 2 African Huts for my Historicon game, which is a bit of a start!

Games:
Goal: Try to exceed 20 games run/assisted with/played in this year.
Result:  26 games, pretty much one every 2 weeks. Until I retire, I think that's about the practical limits of time and marital harmony!

Goal: Historicon is the big question mark. It looks at least an even chance that it WILL happen this July, although it is likely to be restricted (see the plans for Cold Wars) . That makes it very difficult to plan any games. There is certainly no way I could see doing a Campaign in a Day event there in 2021, but 2022 is a distinct possibility.
Result: Well, of course Historicon was indeed cancelled in July, but morphed into November in Valley Forge, and I ran 5 games and played in one there.
Goal: For the same reason, I don't think 2021 will be the year to run a Siege game using Vauban's Wars at Historicon... but we'll see. 2022 would be much more likely.
Result: Spot on. I don't see 2022 as being the year either, maybe 2023?
Goal: One or two games with Field of Battle 3rd edition are likely to be on the roster (? Albuera 1811), as well as one or more games with To the Strongest/For King and Parliament. One possibility would be doing the Battle of Qadesh.
A game with the 15mm Renaissance Galleys (Galleys and Galleons rules) on Sunday AM is a definite possibility.
Result: Did Fuentes with FoB3, Kadesh and 2 more TTS! games, no FK&P at Hostoricon this year, and did the Galley game Sunday AM.
Goal: If Covid looks better by early Summer, it might be possible to consider doing a Campaign in a Day event in Connecticut in late September/early October.
Bingo!  The Many Roads to Mantua Campaign in a Daywas a deliberately trimmed down affair, but a great success.

Goal: I still have a lot of sets that I want to try out!
There at least 4 different Napoleonic rules sets in the sights - Blogger sets Eagles Cheaper than Brain Cells and 123! Napoleonics, plus General d' Armee and a Napoleonic variant(s) for Bloody Big Battles (Jared has been using this last with his students).
Several Napoleonic Age of Sail rule sets to try as well - Grand Fleet Actions in the Age of Sail and Form Line of Battle.
Also for my large collection of Superior Starfleet Wars/Galactic Knights ships, play at least one game with those rules, as well as Starmada and Ascension of the Galaxy (from a Kickstarter).
Result: Mostly Epic Fail. Got Gd'A on the table, but abandoned the solo playtest after 1 turn; I just found the processes unnecessarily lengthy, and thus dragged my feet playing the game until the point where I needed the table for something else. Non of the others even approached a turn on the tabletop. Maybe 2022?
Posted by Gonsalvo at 11:34 PM 15 comments: