The Cuirassiers:
There were as many as 27 regiments of (Heavy) “Cavalerie” in the early years of the Repuiblic, slowly decreasing to 25 and then 24 when Napoleon became First Consul. In 1802 he reduced the number of “Cavalerie” regiments to 18, the surplus troopers from the disbanded regiments serving to increase the number of squadrons in the remaining regiments. The 8th regiment had retained its Cuirasses from the old Royalist army,and the 1st Regiment had adopted them in 1801; as  First Consul, he initially decreed that the 2nd, 3rd, 4th, and 5th should also be equipped with the Cuirass; gradually the number of Cavalerie regiments was reduced to 12, and all were equipped with Cuirasses by 1804, thus forming the new arm of Cuirassiers. A 13th regiment was added in 1808, formed from the 1st Provisional Heavy Cavalry regiment, and in 1810 the 14th regiment was formed from the 2nd Dutch Cuirassiers.

As Napoleon reorganized the French Army, the roles of the various kinds of Cavalry were made more clearly delineated. The Cuirassiers (and their cousins, the Carabiniers) were intended to fulfill a shock role on the battlefield. They were generally big men riding large horses, and were ordinarily kept in their own Divisions as part of the Army's Cavalry Reserve. The Light Cavalry (Chasseurs a Cheval, Hussars, and later the Chevau-Leger Lanciers as well) were generally assigned to the Corps Cavalry Divisions, and usually performed much more scouting duties, although they certainly supported their Corps in Battle as well. The Medium Cavalry (Dragoons) had a more hybrid role, usually serving in their own Divisions, and sometimes participating in screening and scouting duties, but often being assigned to a Corps on an ad-hoc basis for additional Cavalry support. Finally, the dragoons at times reverted to their infantry role, although this was most commonly a result of a shortage of mounts.
The uniforms of the Cuirassiers underwent considerable evolution over time. The coat was always dark blue with white metal buttons and red epaulets (silver for officers), pants were usually buff or white, but could be grey, brown, blue or even green on campaign. Leather work was white, and the steel cuirass itself was lined with red fabric edged in white. The familiar steel Cuirassier helmet had a copper crest, fur turban, black horsehair tail and aigrette, and a red plume at the side. The distinctions among the various regiments varied over time, as can be seen in the following tables. Where an item is left dark blue, it is piped in the facing color, while colored items were piped dark blue. Turnbacks were ornamented with dark blue grenade emblems. Saddle blankets and portemanteau were dark blue with white borders (silver for officers). The saddle blankets had white (or silver for officers again) grenade emblems, and in later years the regimental number appeared on the ends of the portemanteau..
1800 – 1810
Initially a long tailed habit coat was worn, replaced by a shorter tailed, single breasted habit-surtout in 1803. It was replaced in 1806 by a habit-veste with squared lapels in the regimental color; in 1809 a new habit-surtout was introduced. However, this lacked pockets and thus the 1st and 4th regiment, etc., were now indistinguishable.
1810 – 1812:
To solve the issue of distinguishing the regiments by their uniform, a new scheme was introduced for the habit-surtout.

Aurore is a light golden orange color, and Lie-de Vin (literally “wine dregs”) is usually depicted as a dark purplish or brownish red.
1812 – 1815
The tails of even the newer garments, although shorter than the old fashioned Cavalerie uniform still proved to be too long for comfortable wear with the Cuirass; therefore in 1812 a new single breasted habit veste with much shorter tails was introduced; of course, the temptation to change the facings proved irresistible, the units now being distinguished only by the coloring of the cuffs and cuff flaps.
OK, on to some pictures of these famous warriors: 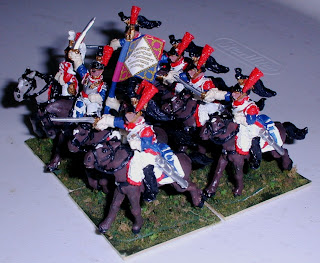 This is the 1er Regiment of Cuirassiers, with scarlet facings, as well as scarlet "wolves teeth" border to the white sheepskins of the troopers. 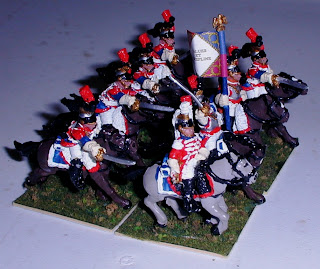 The trumpeter wears reversed colors, placing the unit prior to 1812-13 (depending upon how long you think it took for the Imperial Livery decreed for trumpeters and drummers to be fully implemented 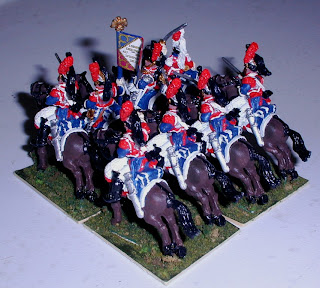 A rear view of the 1st Regiment. These were among the first of the Foundy figures I painted as part of the replacement of my prior Scruby French Napoleonic army, perhaps 15 years ago now. After I took these pictures, I actually went back and spiffed them up a bit with some dry brushing of the horse's manes ans tails, and the plumes and horsehair on the helmets. Doesn't show much from a foot away, but it certainly made them look sharper up close.! 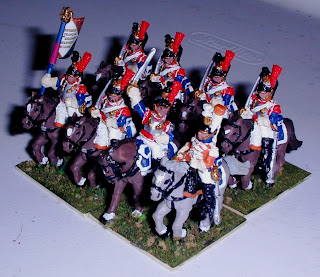 This is the 4e Cuirassiers, faced in aurore, sort of light orange-yellow color. 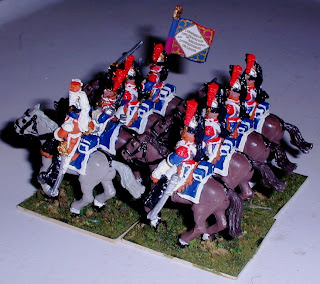 Reversed colors are again worn by the trumpeter (who never wore the cuirass), their coats adorned by white lace across the chest, white edging to the dark blue colors and cuffs, white epaulets, white horsehair tails and aigrettes on the helmet. There were many variation of plume colors for trumpeters, but they were never plain red like the troopers. 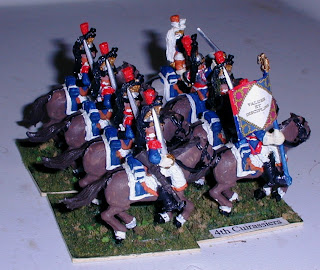 I used a white background for these Cuirassier pictures for a change; I'm not sure if I like it better than the green of my table covering. 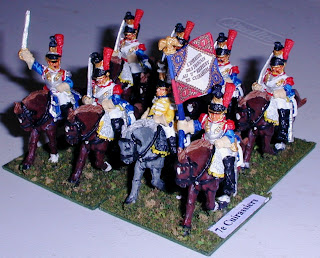 This regiment is the 7e Cuirassiers; I think their bright yellow facings are my favorite! 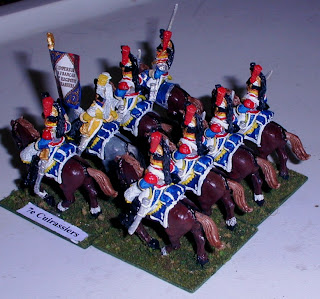 You can see the subtle improvement in painting on this regiment as reflected by the staining/dry brushing of the manes and tails, the horsehair on the helmet, etc. 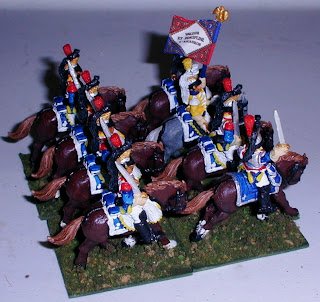 As usual for the French Cavalry, the trumpeter rides a grey, and the sheepskin on his saddle is black instead of white like the troopers.

These fellows are from the 10e Cuirassiers. I like their Rose-pink facings. 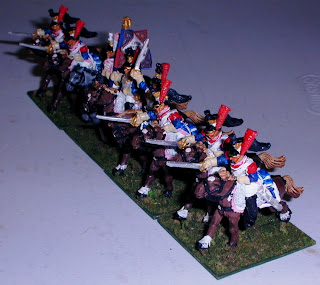 This pose with the swords thrust straight out is great! I do recall that epoxying the torsos to the waist, cast in one piece with the horse, was a bit of a pain, but the end result was worth it. Nothing effeminate looking about their bearing, that's for sure! 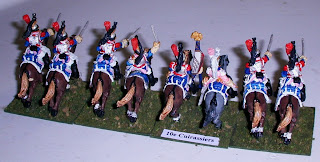 A final view of the fine Foundry figures making up the 10th Regiment of Cuirassiers. 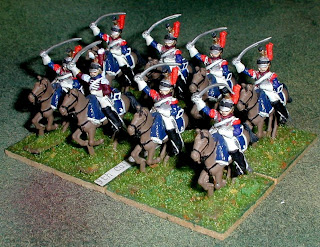 This is the 13e regiment of Cuirassiers. These are Minifigs that I got from Joe as part of some deal, the figures having come to him from someone else, who may have had them form someone else again; thus this is one of the few units I didn't paint myself. In preparation for this post I finally touched them up, and changed their facing color to lie-de-vin as I had always intended. This regiment (and color) are not often seen on the tabletop. They could just as well be the 14e in 1812 and beyond, the uniforms of the two regiments then being indistinguishable when their gloves were worn. 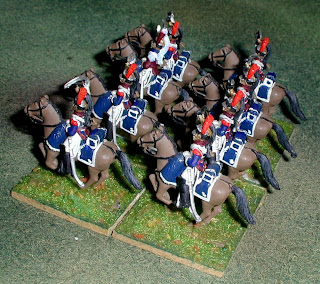 Another view of the 13th Cuirasiers, with the unusual lie-de vin facings. I think I got the shade about right. It is similar to that seen in the illustration in Fred and Liliane Funken's L' Uniforme et les Armes des Soldats du Premier Empire. Interestingly Funken also lists the facings of scarlet-aurore-rose-jonquil as beginning in 1804; this is almost certainly incorrect, although perhaps it is possible that the new colors might have been used unofficially for a time prior to their codification by Imperial decree? 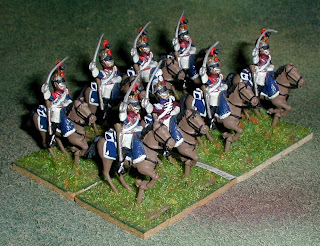 The Carabiniers:
The two regiments of French Carbiniers date way back to 1691; in the old Royal army they were definitely the elite of the cavalry. With the Revolution, perhaps somewhat surprisingly, they retained their separate identity from the other Cavalerie regiments which evolved into the Cuirassiers as discussed above.
From 1791, the Carabiniers wore a dark blue habit-veste coat with scarlet lapels, cuffs and turnbacks, the later bearing dark blue grenade emblems (later white in 1809). The collars were dark blue piped in scarlet; the 1st regiment had scarlet cuff flaps piped in dark blue, while the second regiment had dark blue cuff flaps piped in scarlet; this was the only distinction between the two regiments. White metal buttons were worn on the jacket, as well as scarlet epaulets edged in white lace on the shoulder strap portion. Trumpeters wore reversed colors with white lace to the collars, cuffs, lapels, and turnbacks, as well as dark blue epaulets. Waist coats were white, and pants buff. All ranks wore a black bearskin headress with scarlet plume and white cords; the cul de singe on the top of the bearskin was red with a white cross. Leather was buff edged white. Horse furniture was as for the Cuirassiers. Thus, there was considerable similarity to their uniform and that of the Grenadiers a Cheval of the Imperial Guard; the Carabiniers were mistaken for these guardsmen by the enemy on several occasions.
In 1810, the uniform of the Carbiniers was altered radically; it is said that Napoleon felt they required cuirasses for better protection due to losses suffered to the Austrian cavalry during the 1809 campaign. In any event, the radically redesigned uniform is surely one of the most spectacular of the Napoleonic wars! It consisted of a white, short tailed, single breasted habit-veste with sky blue facings on the collars, cuffs (both piped in white) and turnbacks (the later with white grenade emblems). Breeches were white, and the saddle cloth and portemanteau sky blue piped white. There was sky blue piping down the front of the jacket and on the pockets of the tails of the jacket. The first regiment had white cuff flaps piped in light blue, and the second light blue cuff flaps piped in white; in 1812 the cuffs for the first regiment changed to scarlet. Red epaulets piped in white were worn. Their new cuirass was similar to that of the Cuirassiers except that it was covered with a thin sheet of brass (red copper for officers) save for about an inch all around, thus allowing the steel to show as a white metal border all around. The cuirass was lined with light blue cloth piped white. Helmets were yellow brass and iron (red copper and silver for officers), with an impressive red comb (trumpeters  generally wore reversed colors, with white or light blue combs on the helmet until the Imperial Livery was introduced in 1812, thereafter scarlet combs). 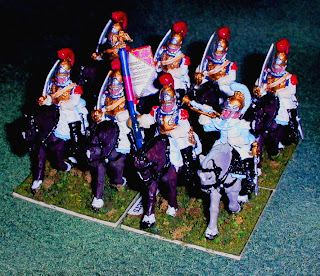 The 2e Carabiniers in their later uniform; the trumpeter rides then usual grey horse and has a sky blue coat with white lace bands across the chest, and faced in white, with a sky blue comb to the helmet. 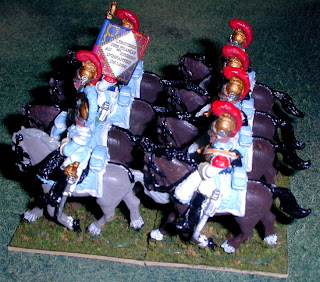 Truly a spectacular uniform, no? As usual, the trumpeter's sheepskin is black instead of white; all are edged with light blue "wolves teeth". 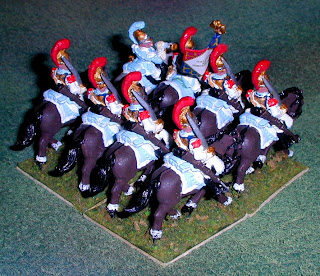 A rear view of the 2nd regiment of Carabiniers, circa 1810. These are Foundry figures once again, and speaking of Heavy Cavalry - these figures have a heck of a lot of mass to them!
I hope you found this survey of the uniforms of Napoleon's Heavy cavalry useful. We have only to cover the rainbow of color that was the uniforms of the French Hussars to complete our survey of the uniforms of the French line cavalry of the Napoleonic Wars.
Until next time - form square if you see any of these guys thundering down upon you!
Peter
Posted by Gonsalvo at 7:08 PM 1 comment: