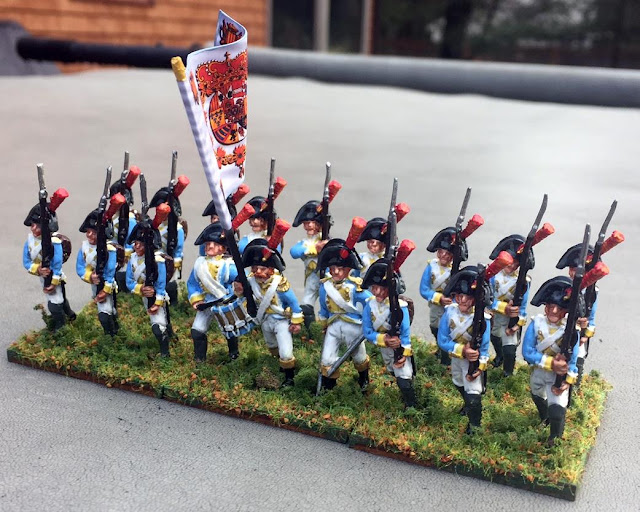 There were three "Irish" regiments serving in the Spanish Army, the oldest of which was Irlanda ("Ireland"), raised in 1698. They were part of the "Wild Geese" departing Ireland to serve in the armies of Catholic powers in the aftermath of the treaty of Limerick in 1691, and continuing for the next 100 years or more. 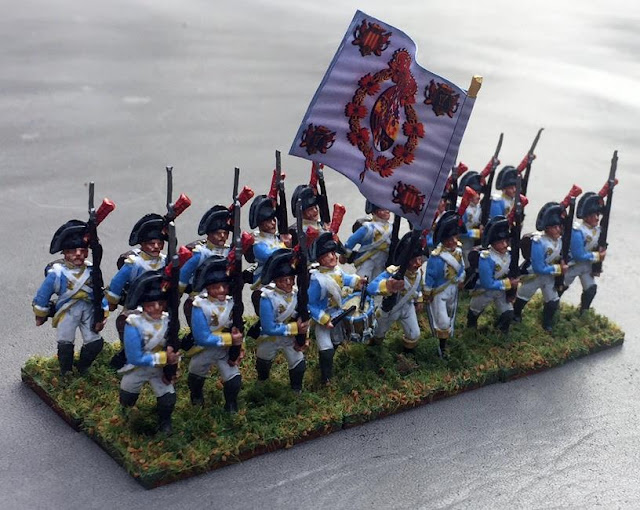 The Irish regiments in Spanish service had worn red coats until 1791, when they changed to white coats like the rest of the army. In 1805, the dress of the Irish regiments changed again, to Sky Blue coats with various light yellow (some sources call it buff) facings. 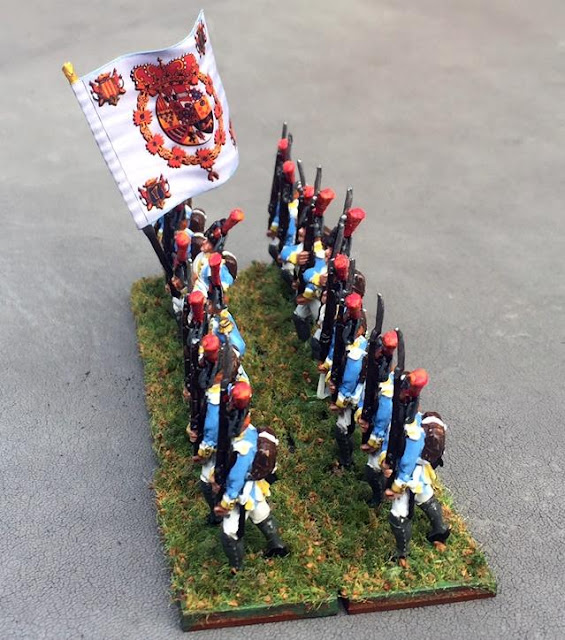 As best I can tell from illustrations of their uniforms, the yellow facings and cuff flaps were piped in white; if an item was left sky blue, it was piped yellow instead. 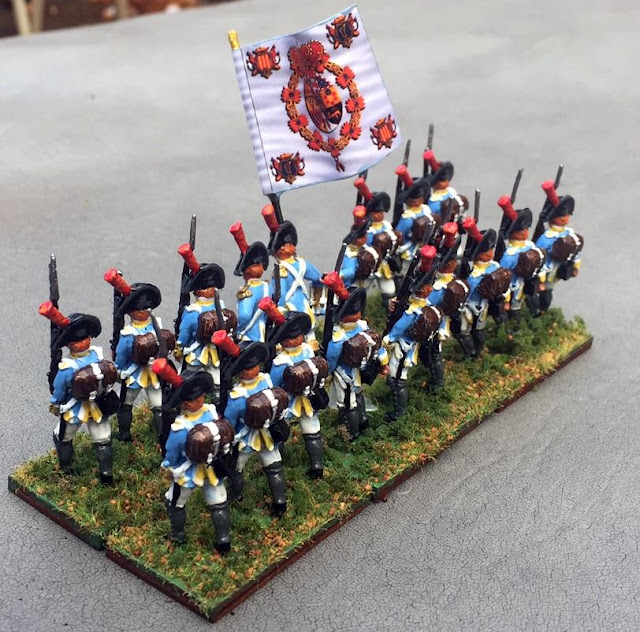 Note the  Irish harp badge on the flag; this is the  Corunella flag of the Hibernia (the Latin name for Ireland) regiment, raised in 1709, as made by Adolfo Ramos, but it seems that the flags of all three Irish regiments were nearly identical anyway. 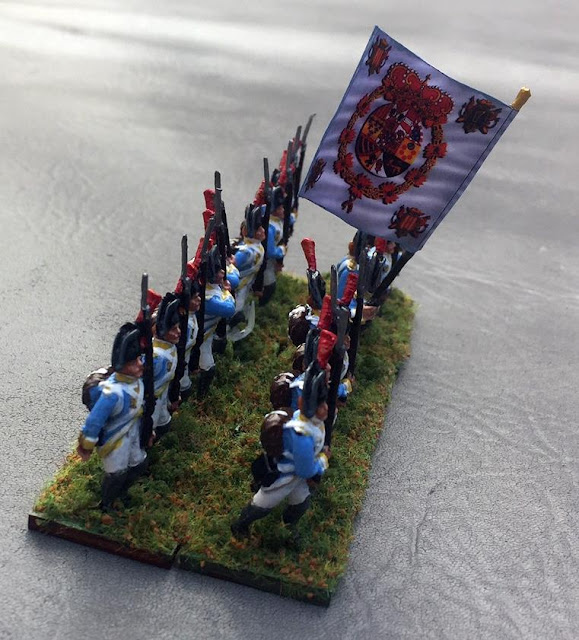 These fine 28mm figures are by Three Armies. 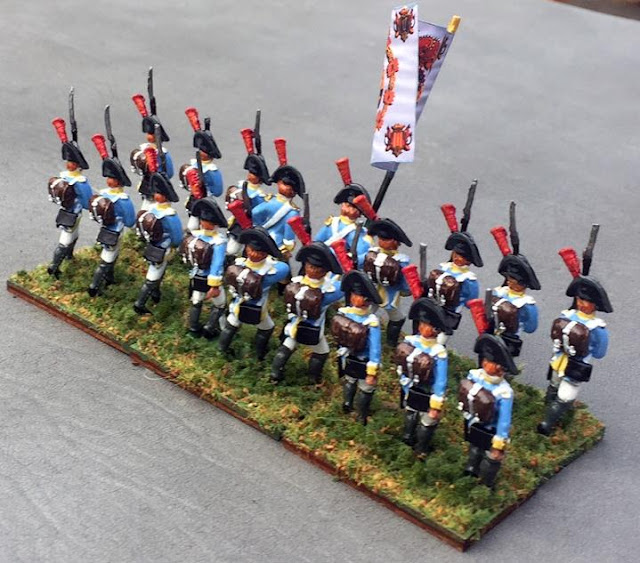 Although most of the soldiers in these regiments would be at best part Irish by this time, I chose to give mine red hair, because I could! 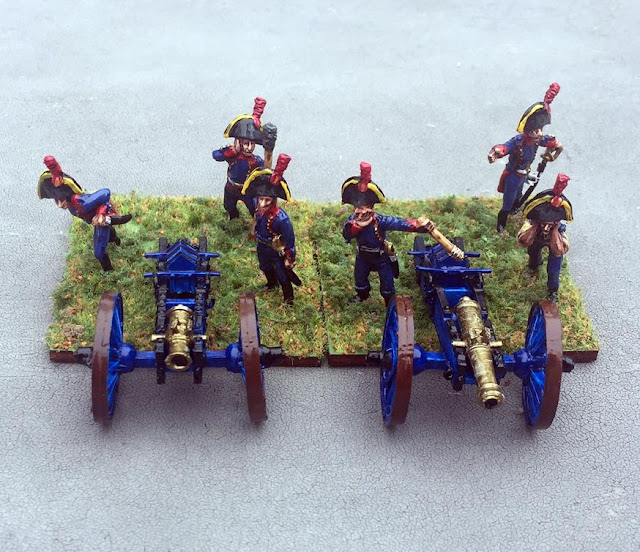 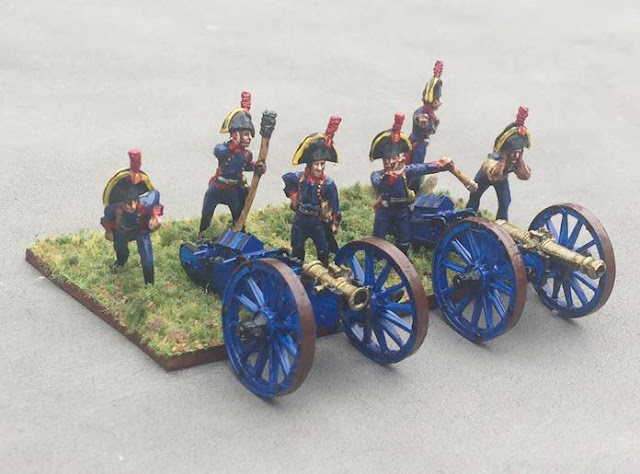 This second Spanish battery, fielding an 8 lber and a howitzer, is from the firing set of Brigade Games figures. 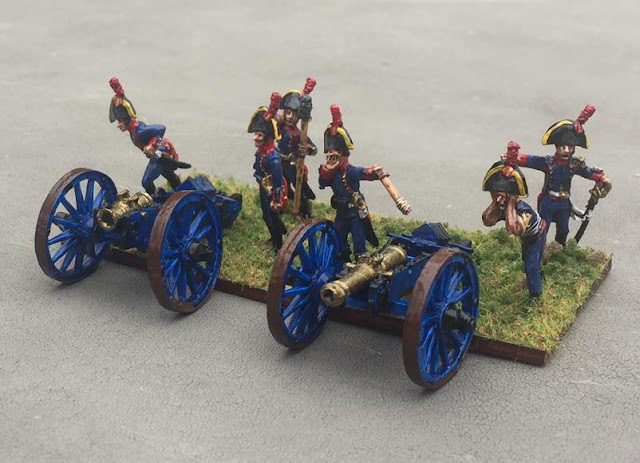 Lots of animation and character in the Paul Hicks sculpts! 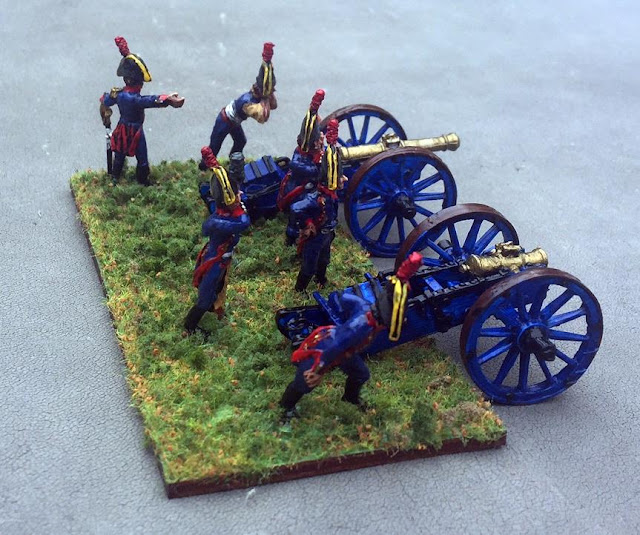 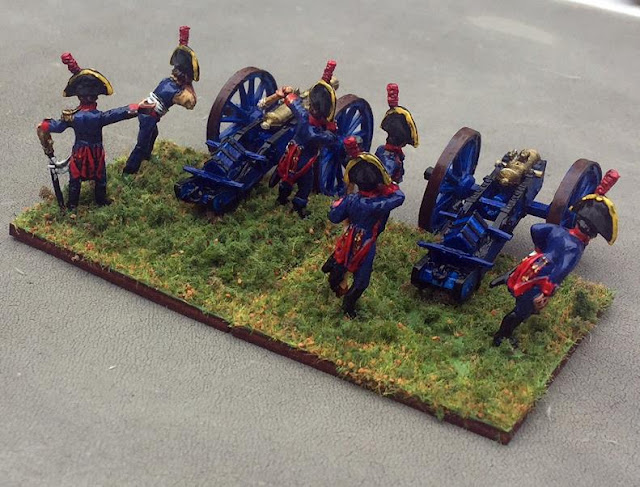 Excellent sculpting of the uniform details. 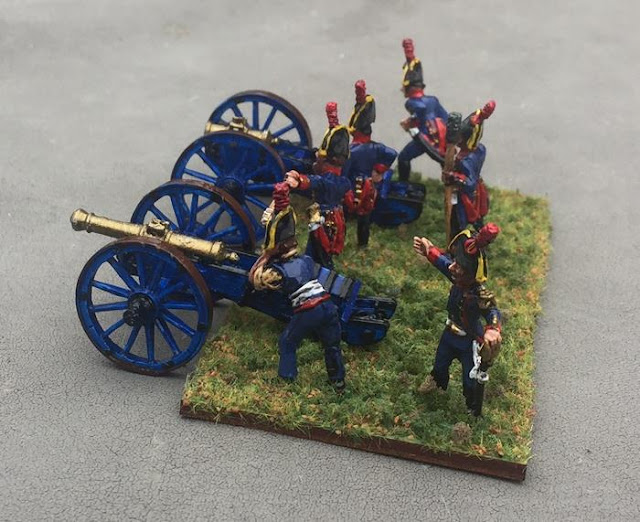 Only the finest for the Real Cuerpo de Artilleria!
Posted by Gonsalvo at 10:28 PM 19 comments:

My second regiment of Spanish Dragoons has mustered out!  But before we get to them, I thought it was time for some detailed uniform information on these troops.

At the start of the Revoulutionary Wars, of the eight regiments, six wore yellow coats, waistcoats, and beeches, whilst the regiment "Rey" (King's) had blue coats and breeches with scarlet waistcoats, and the regiment "Reina"(Queen's) wore a scarlet coat with blue waistcoat and breeches. The regiments had individual colors for their cuffs and turnbacks. There were no lapels and the collars were all the same as the jacket color. The regimental distinctions are listed in the Osprey title "Spanish Army of the Napoleonic Wars (1)", by Rene Chartrand and Bill Younghusband, covering 1793 - 1808. A bicorne hat edged white was worn. Their shabraques were in the facing color, edged with the button color (white for all but one regiment).

By 1796, the Dragoon uniforms changed and all regiments now had yellow coats, white waistcoats and breeches, and red turnbacks. The lapels, collars, turnbacks, and piping on the pockets were now in (quite different) regimental colors. Once again, these are listed in the Osprey title cited. All units had yellow shabraques edged white.

The uniforms of the Spanish Dragoons changed again in 1800. Now all regiments wore green coats, with buff waistcoats and breeches. The shabraques were green edged in white, and of course the regimental distinctions on the lapels, collars, cuffs and pockets changed yet again as well, as listed below. Buttons were white (pewter) for all regiments.

Not content with keeping the uniform industry busy enough already, in 1803 the Dragons were abolished altogether, and the eight regiments converted to Hussars and Cazadores a Caballo (chasseurs). This change proved unsuccessful, and on January 30, 1805, the Dragoons were restored.

Now all regiments wore lemon yellow coats, waistcoats, and breeches with scarlet turnbacks and white buttons. A white crossed sword and quill emblem was embroidered on the collars. The collars, cuffs, cuff flaps, and the button holes on the lapels (only) all had white piping. The pockets on the back of the jacket were piped in the regimental facing color. The 1805 facings were as listed below, but some regiments that were part of La Romana's Division, having been sent to Denmark for service with the French and then repatriated by the British after Napoleon's invasion of Spain in 1808, were still wearing the chasseur style green uniforms in 1809! 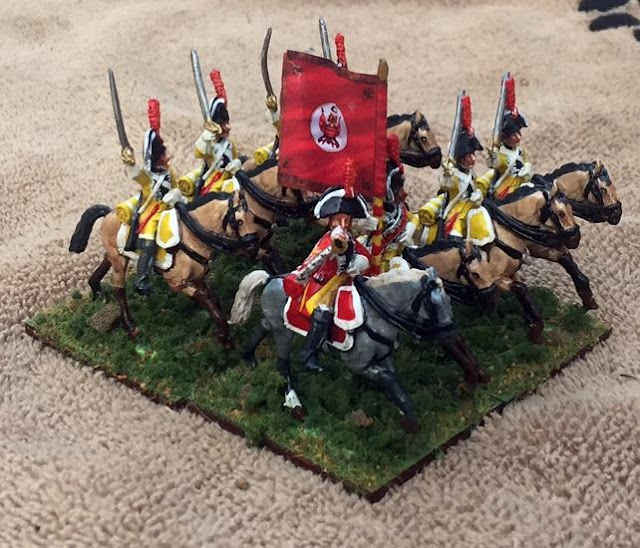 Spanish Dragoon regiment Numancia, wearing the 1805 uniform. The history of this unit dates back to 1707. As with my other regiment, the flag is of the Villaviciosa regiment (the only one available); the only difference would be the badge on the reverse (pictured above) of the flag. Keith's site has a depiction of the regimental badges from an earlier time. 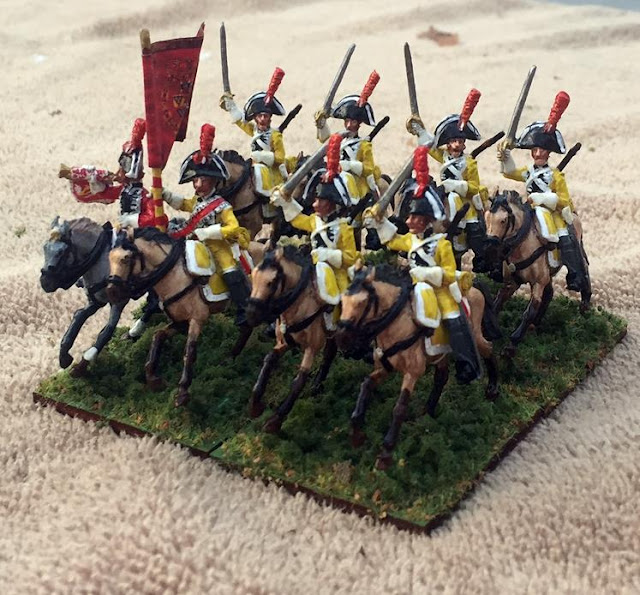 The yellow, black, red and white colors of this unit's uniform are quite striking, aren't they? 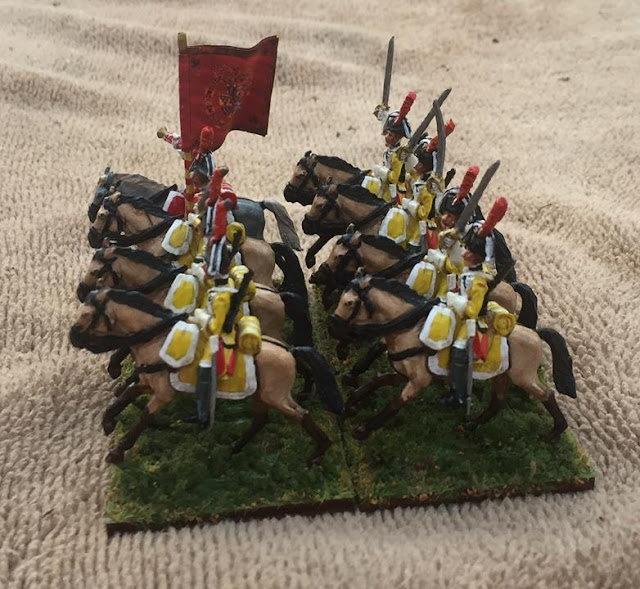 The obverse of the standard has the royal arms in the center. 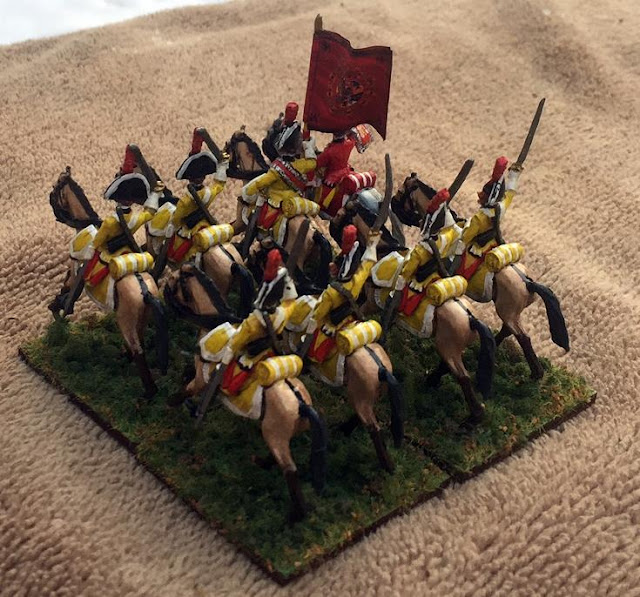 These excellent figures are once again by Brigade Games, sculpted by Paul Hicks. The Dragoons come in 2 variants, the previously shown Almansa Dragoons were composed of figures from the other variant. 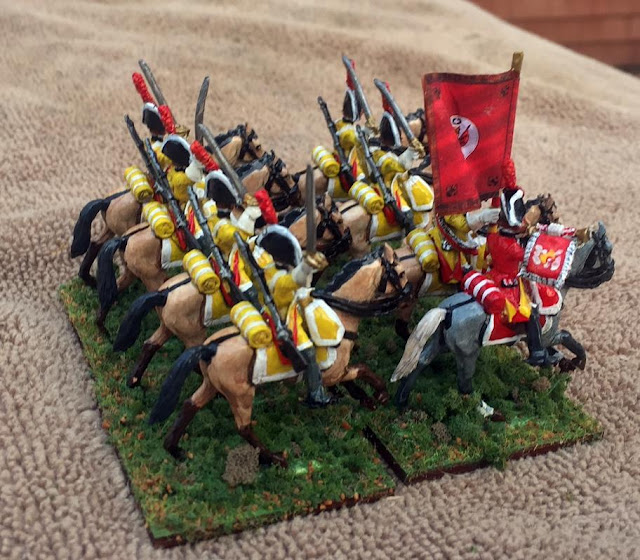 The trumpeters wore "reversed colors", see the prior post for additional discussion of that. The trumpet banners were red with the regimental badge surrounded by a trophy of arms. I couldn't find specific information on the trumpet cords, so I went with white mixed with red. 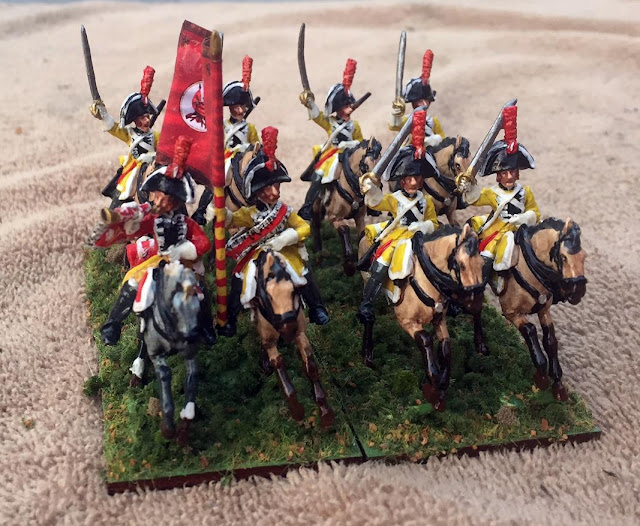 The red and yellow spiral on the flagstaff is a final bit of military bling for this already rather gaudy unit. Carguemos esa línea!
Posted by Gonsalvo at 9:05 AM 19 comments: 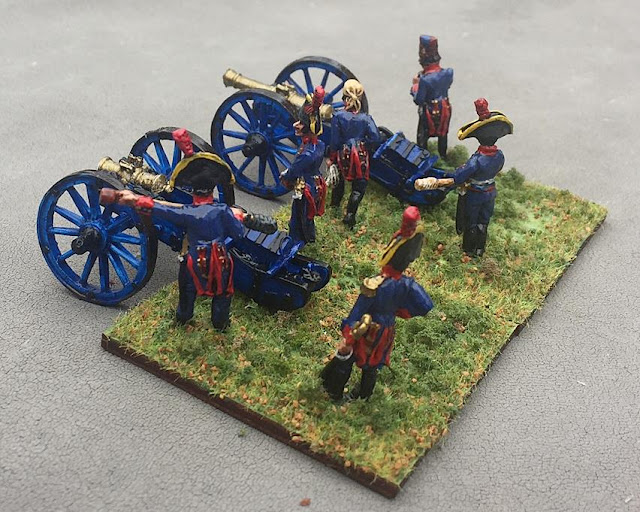 The first artillery battery for my Spanish Napoleonic army rumbles off the painting table! 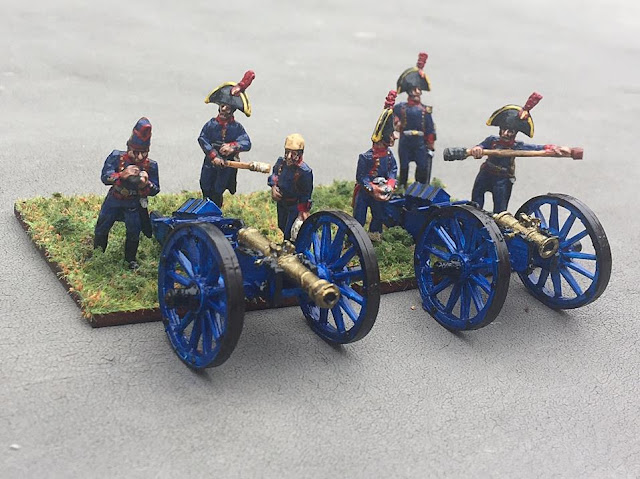 This battery is equipped with  an 8 lber cannons and a howitzer; both of which are Brigade Games models (French gun castings used). 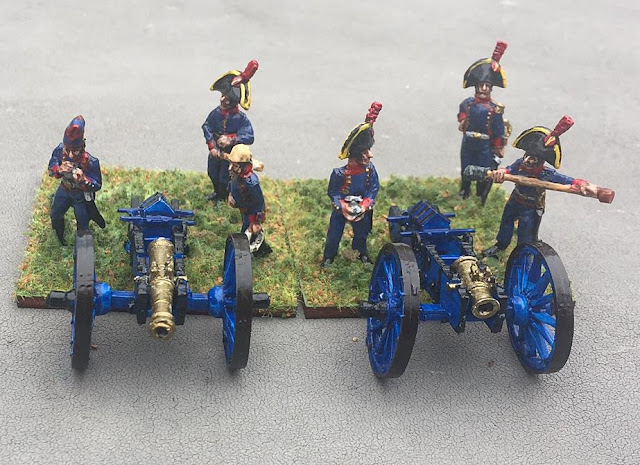 The crew are also by Brigade games; this the "Spanish Artillery loading" set. 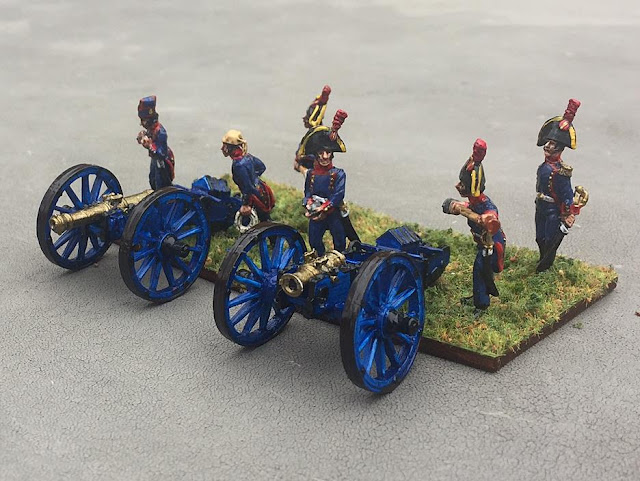 Wonderful sculpts by Paul Hicks. The blue is a 2: 1 mix of Michaels' Craftsmart dark Blue (which is both thin on coverage by itself and a bit light in color) and Delta Ceramcoat Opaque Blue. 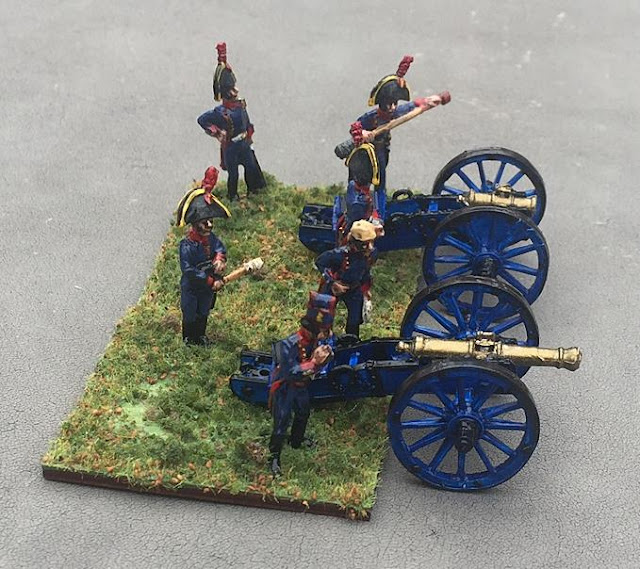 For my usual games with Field of Battle, a battery is two stands, but only one stand per unit is needed for Snappy Nappy. 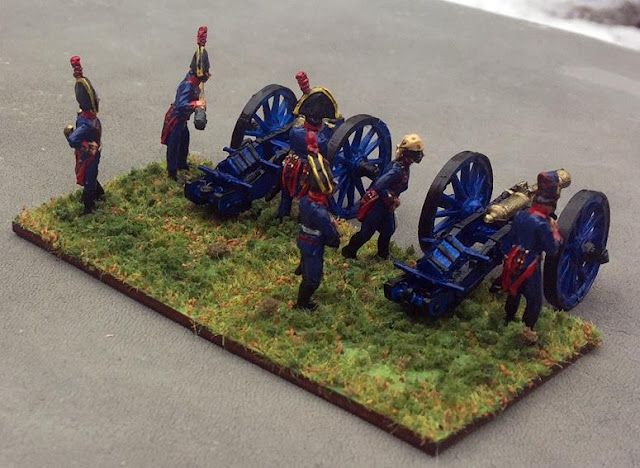