Palms for the not so poor

A year or so ago, when I had just stared working on my New Kingdom Egyptian Army, I visited out recently relocated local Hobby Town. Aside from general modeling and scenic supplies, they usually have little of interest to Historical wargamers. However, this time they had this new range of exceptionally nice, iof quite pricey trees, JTT Scenery products (they do a lot more than just trees as well). They are distributed in the US by Model Rectifier Corporation. The ones that especially caught my eye were these: 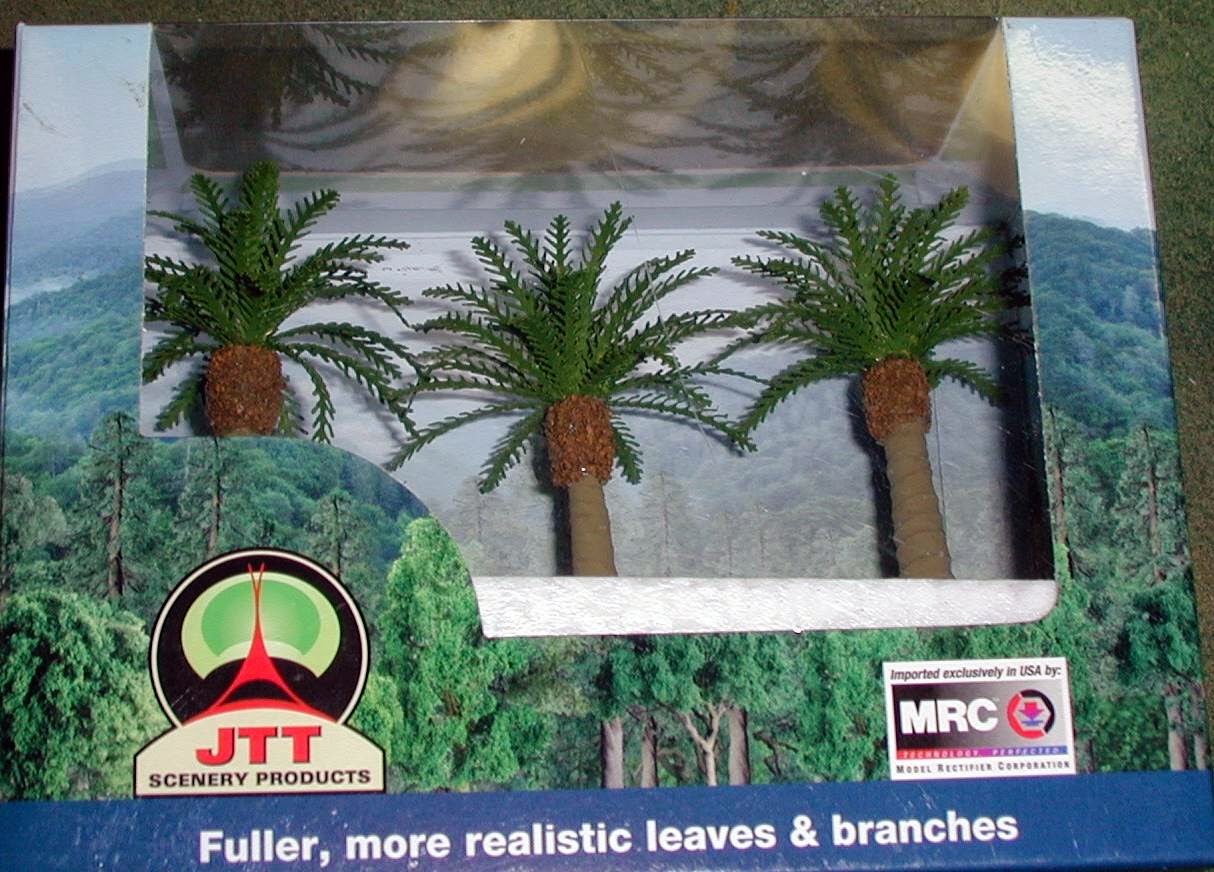 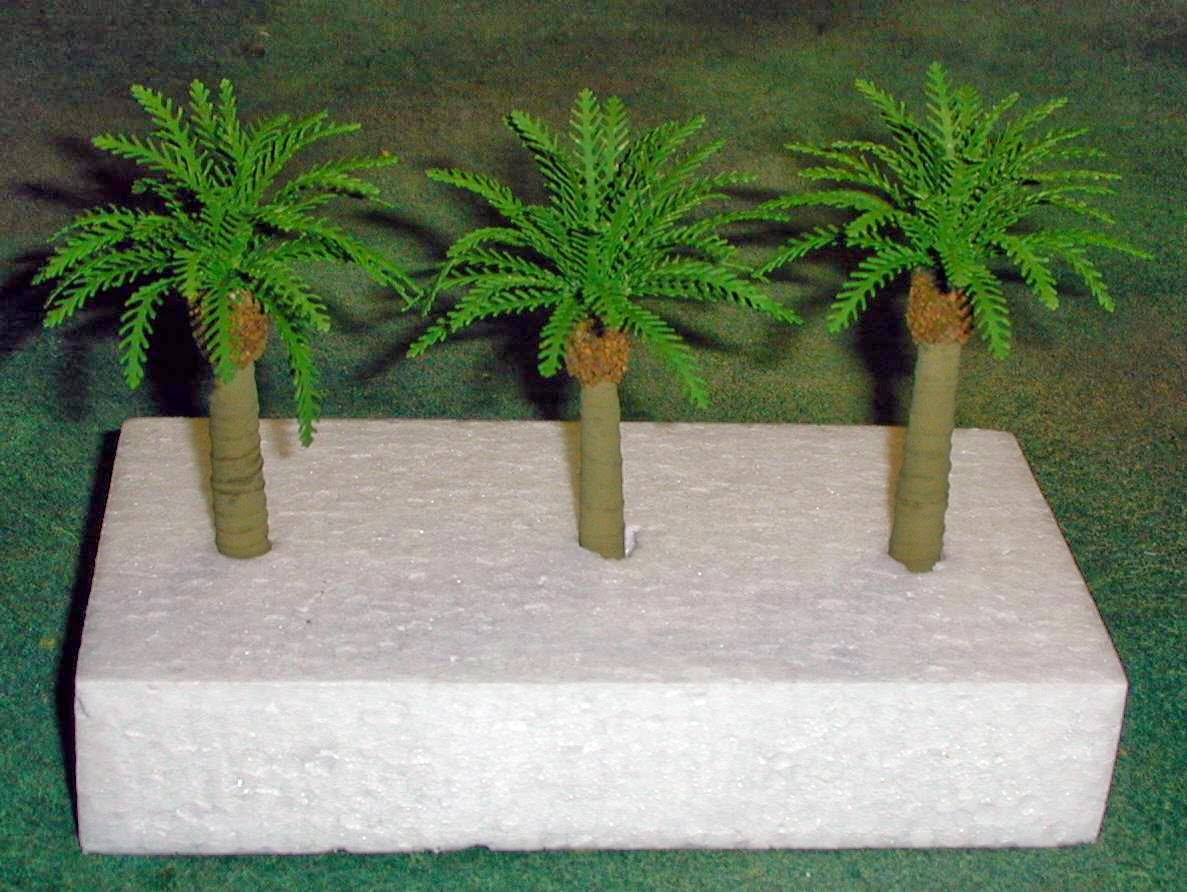 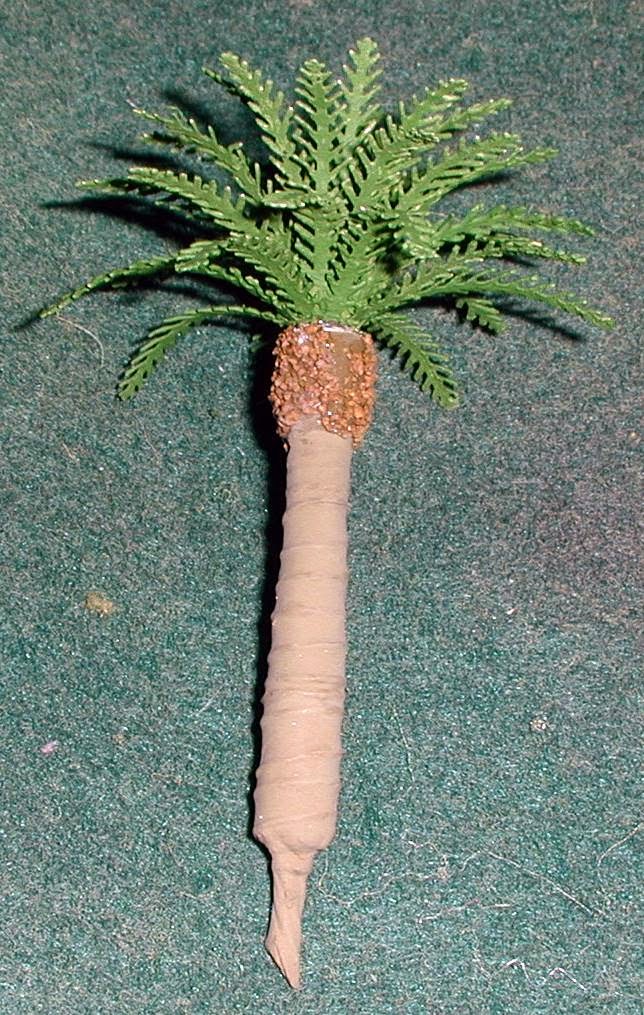 The large spike on the bottom, evidently intended for anchoring in foam board or similar. 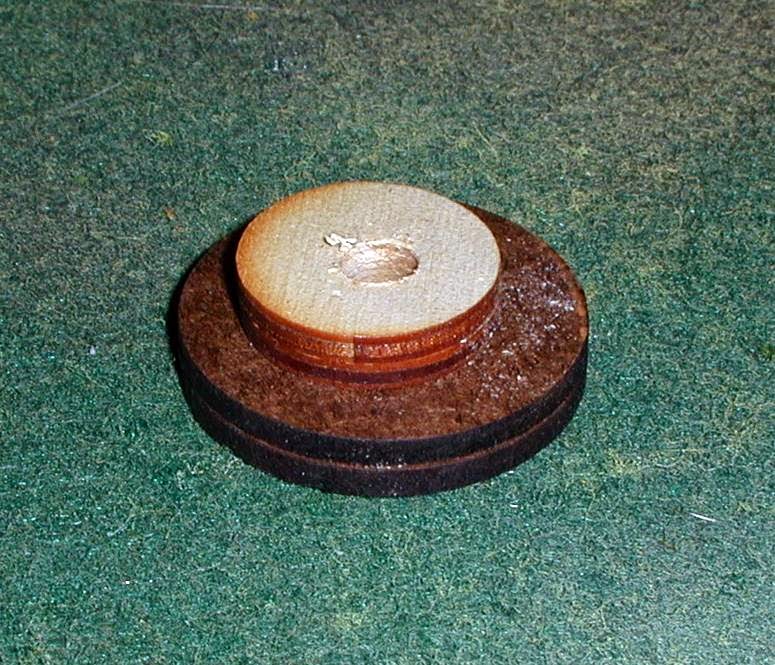 I was a little hesitant to try cutting it off, so a made a raised base to accommodate the trees out of some round Masonite and MDF bases glued together, an then drilled a suitable sized hole for the spike. 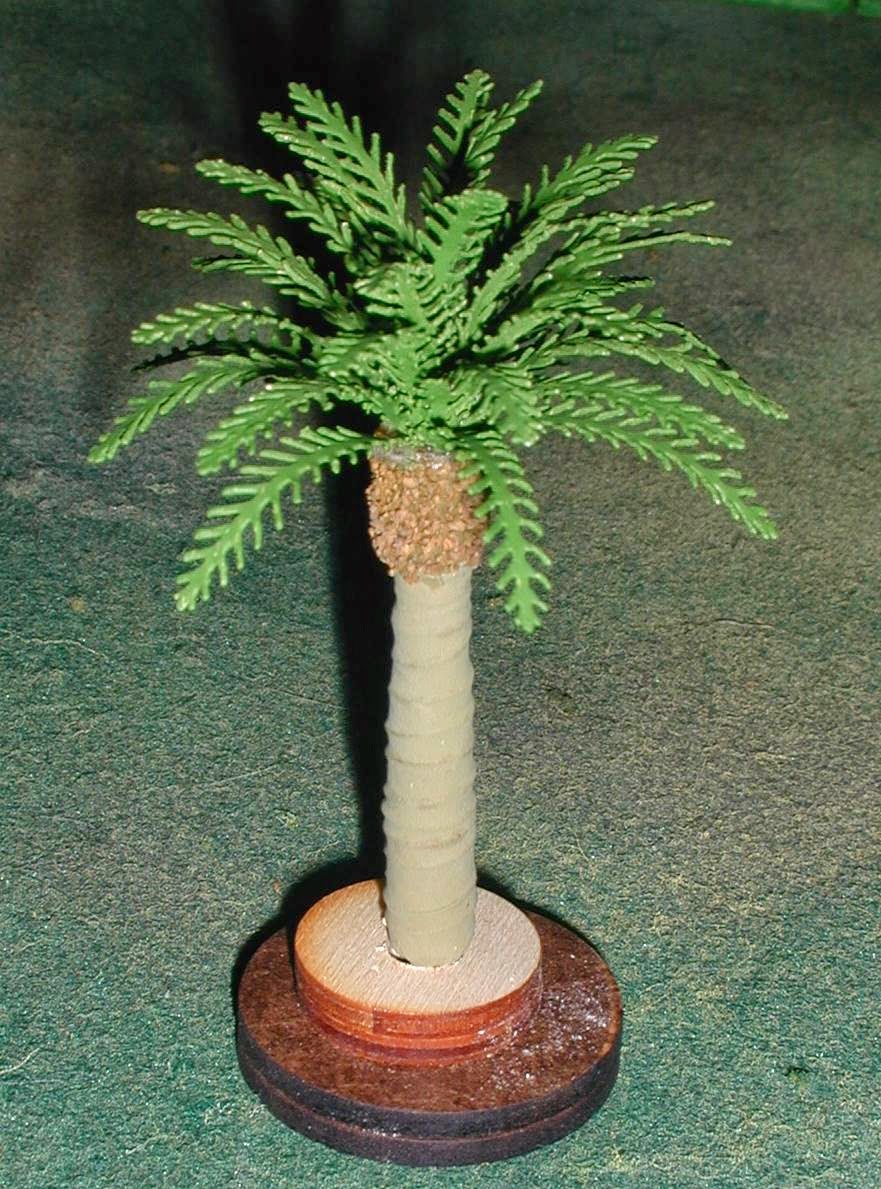 and glued it in place with white glue. 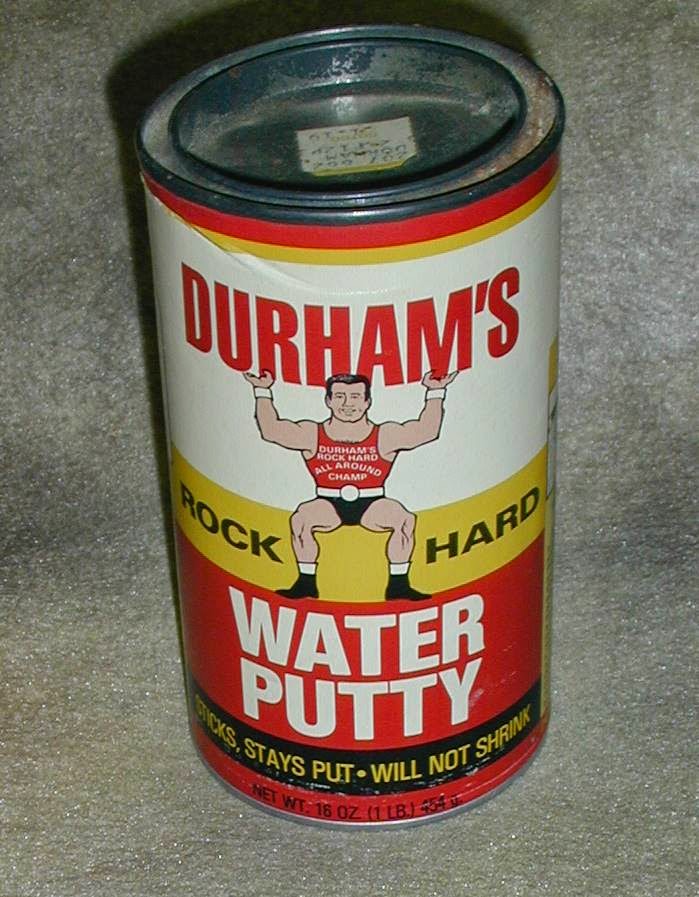 I have a can of this stuff from way back; it is useful for building up "ground" on bases. Mix the powder with order into a stiff paste, and apply like spackle. How old is it - the price tag says $1.99!The slogan and logo probably say about as much about the age of the product, too! 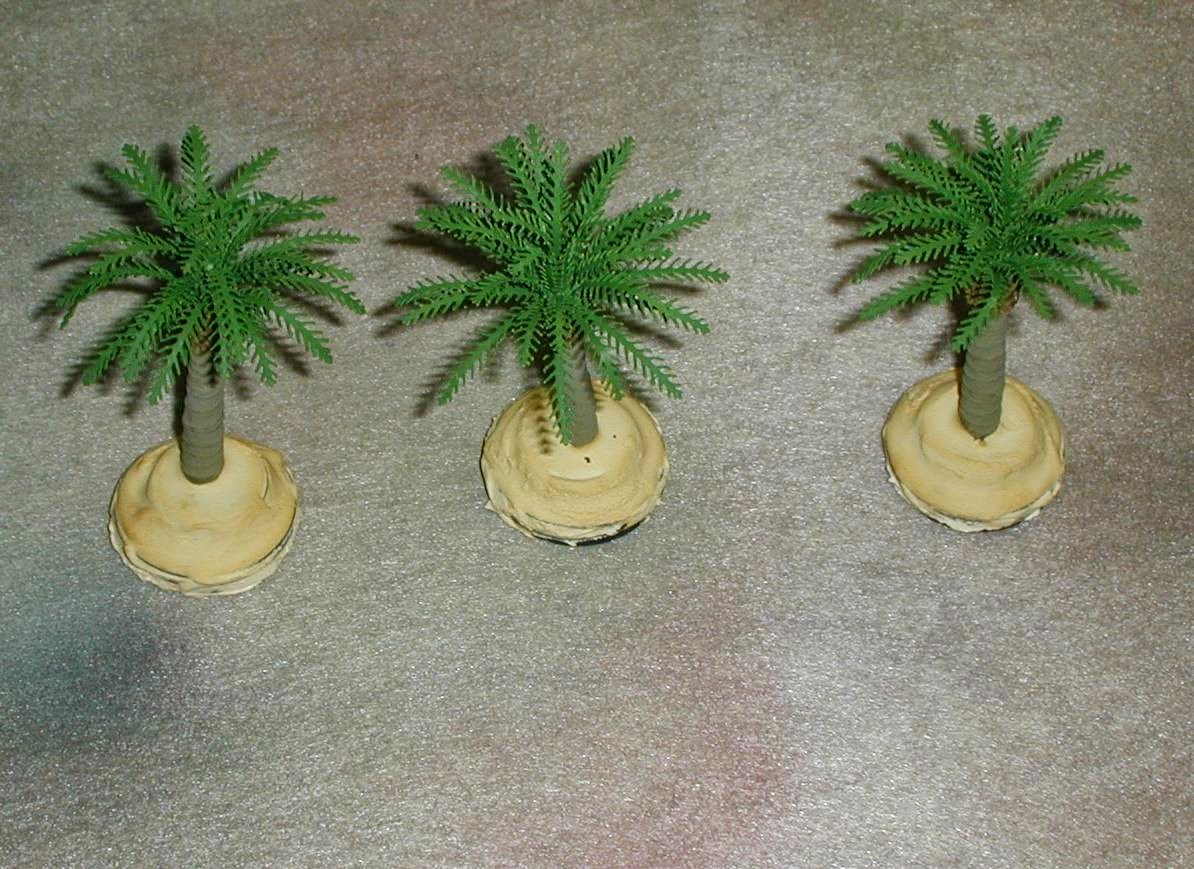 The bases after apply the water putty. 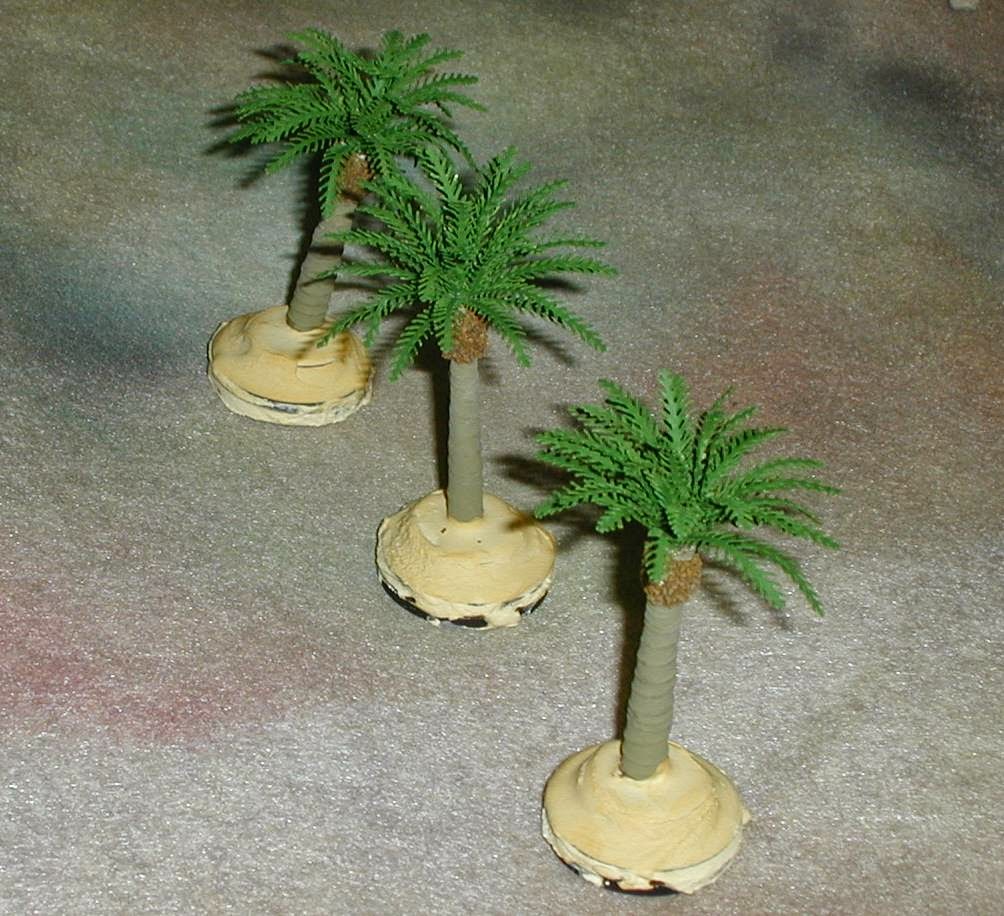 It hardens fully in a few hours, faster the less water is used. 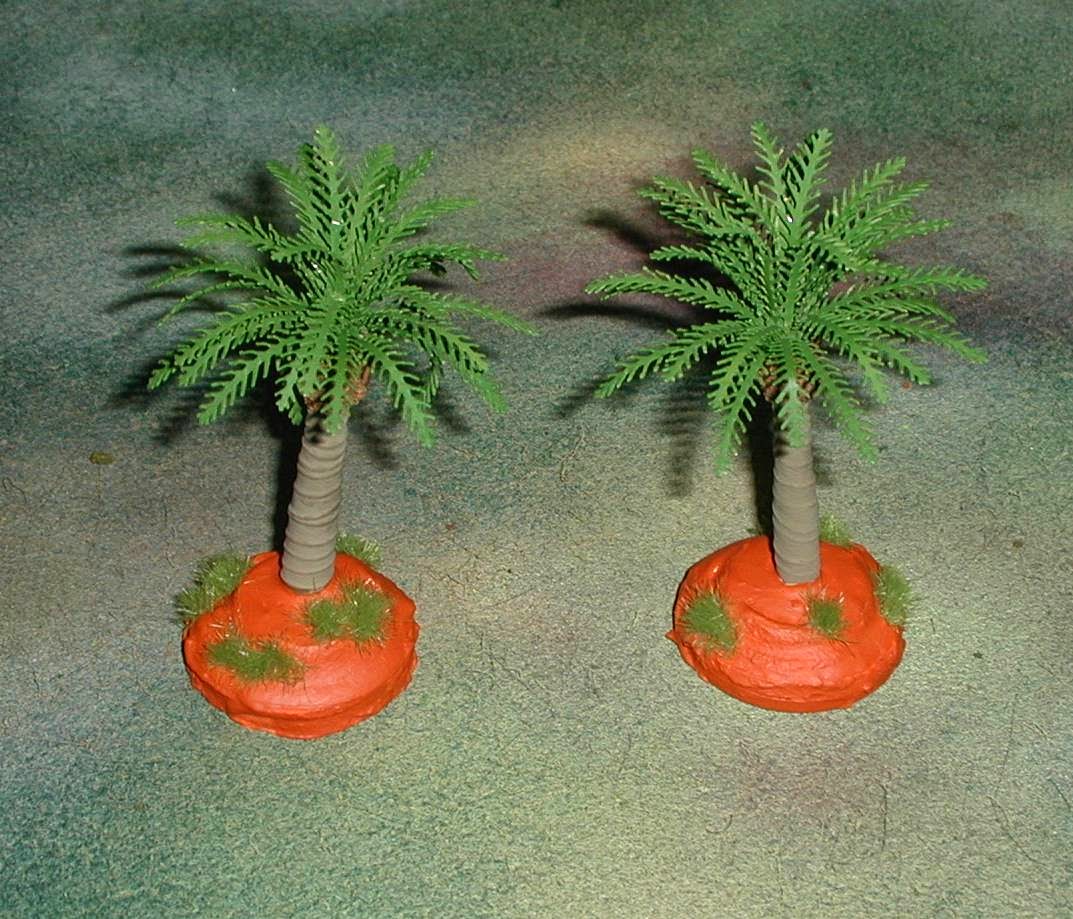 I painted the Duirham's Water Putty with CC "Terracotta" (it takes Latex paint very well), and applied a few "tufts" to the bases. 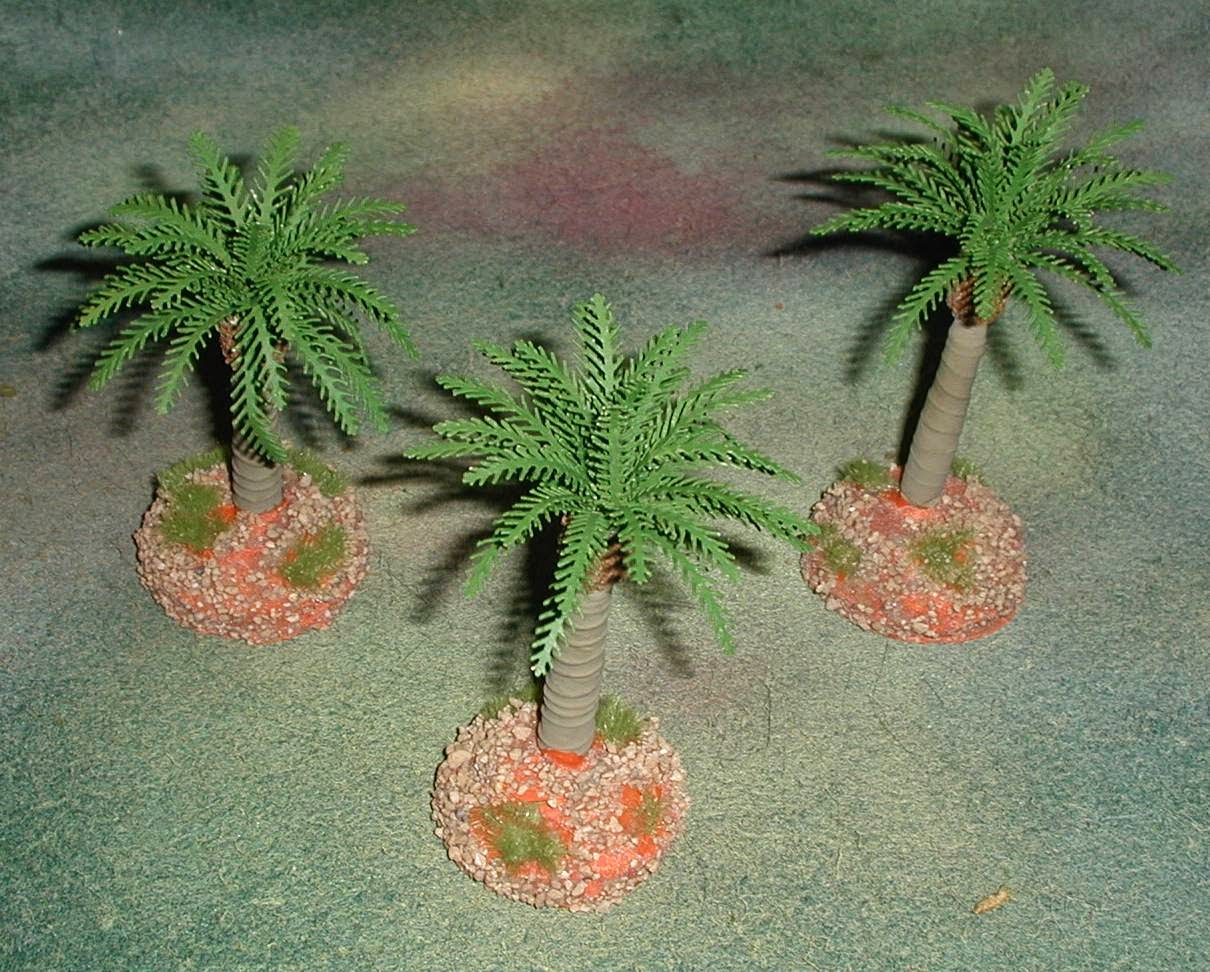 The applied white glue  glue and my sand/fine talus mixture to the bases. 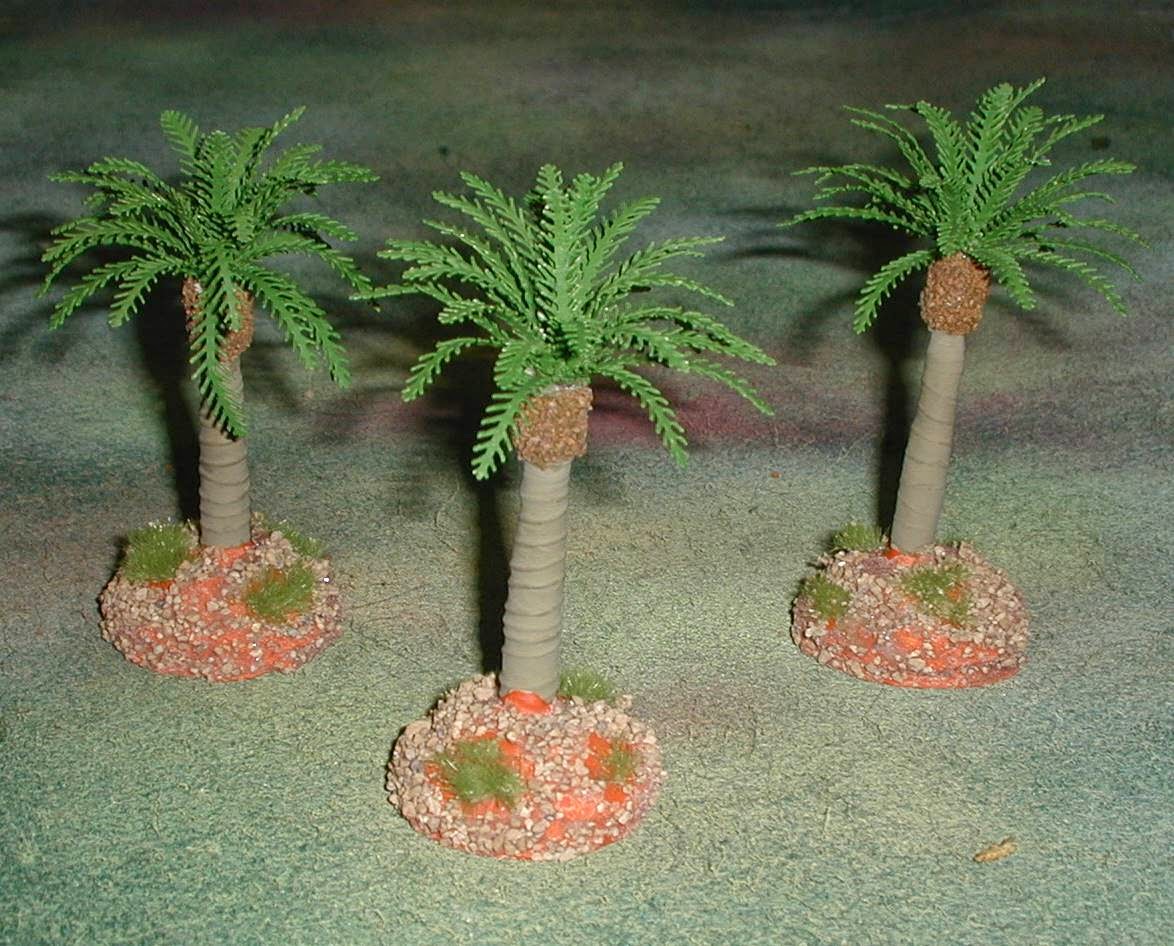 Different than your usual palm trees; the "fronds are actually soft metal, so care will be needed in transport! 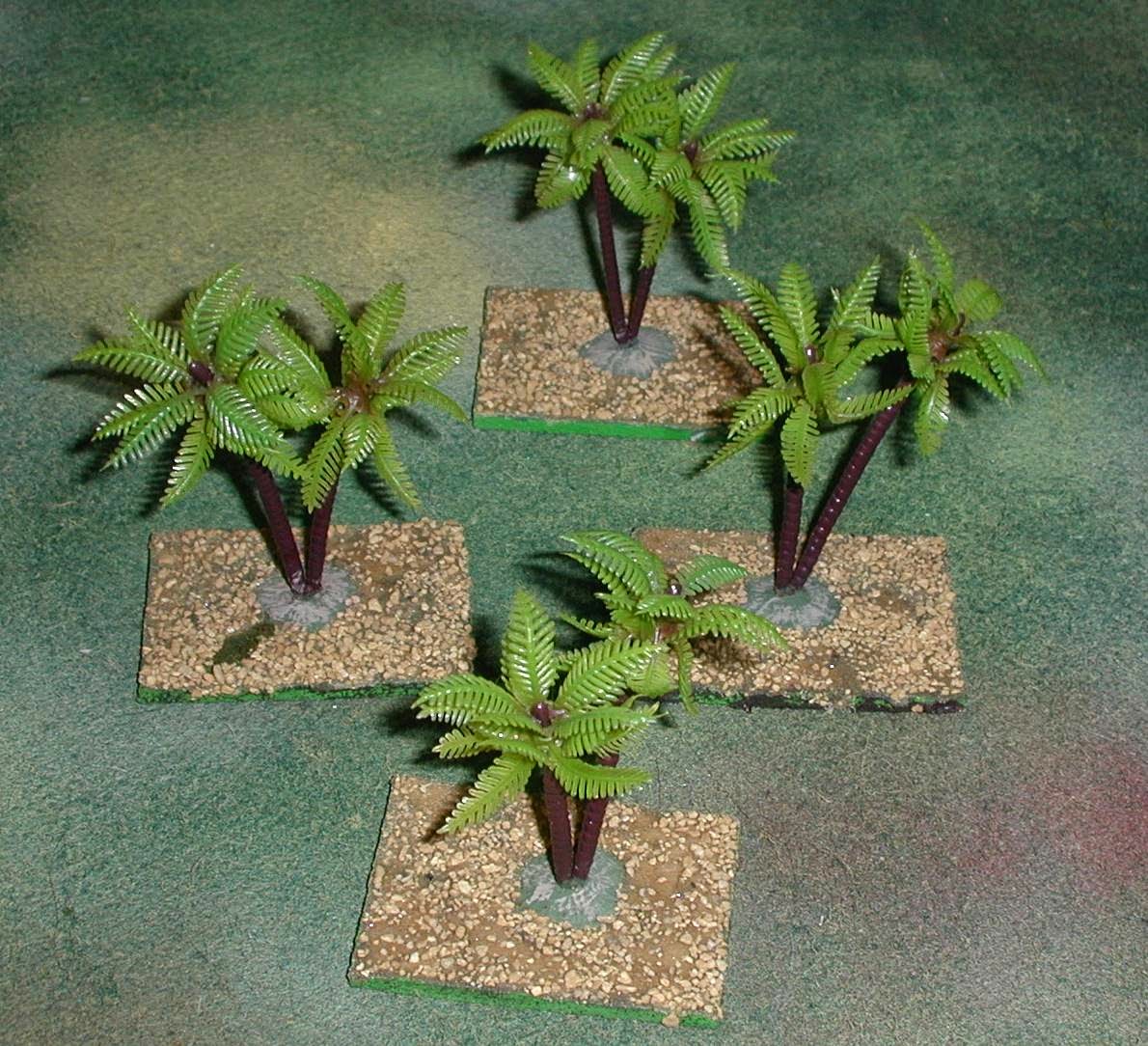 White I was at it, I added the same flocking mixture to some more standard plastic palm trees I got at a flea market in new Brunswick, NJ circa 1982. 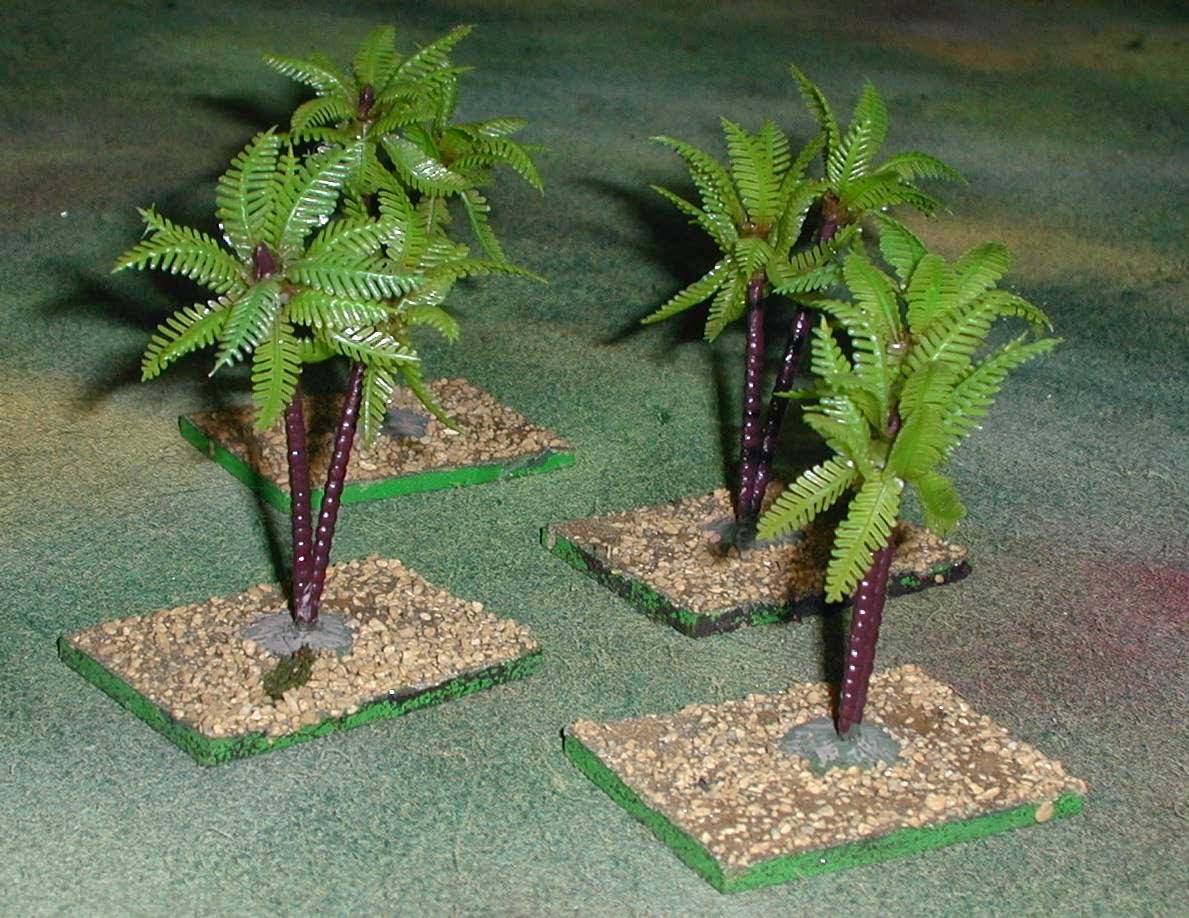 A little dry brushing to the bases to suggest palm roots. 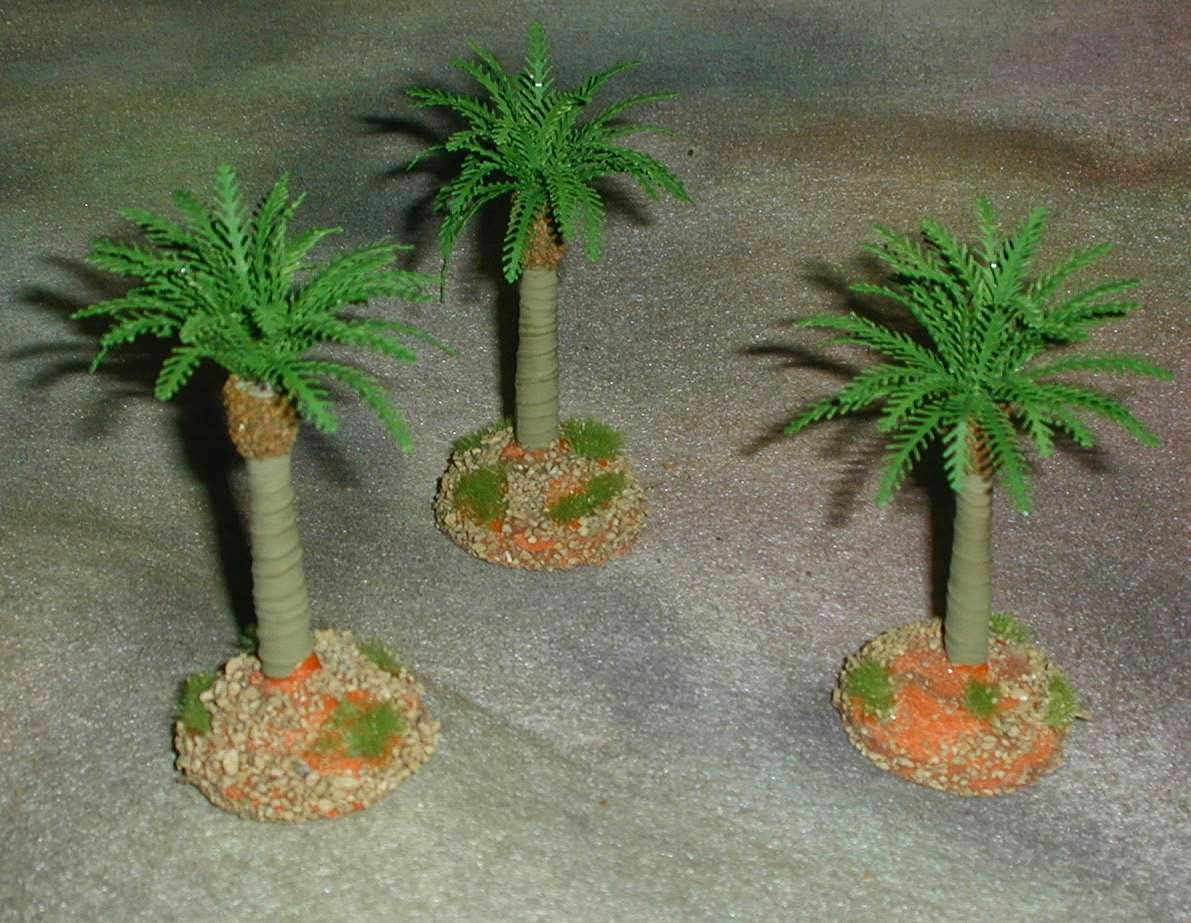 The same Phoenix palm trees on my "Desert" ground cloth. I see these as being alongside temples, statues, etc for their visual impact. 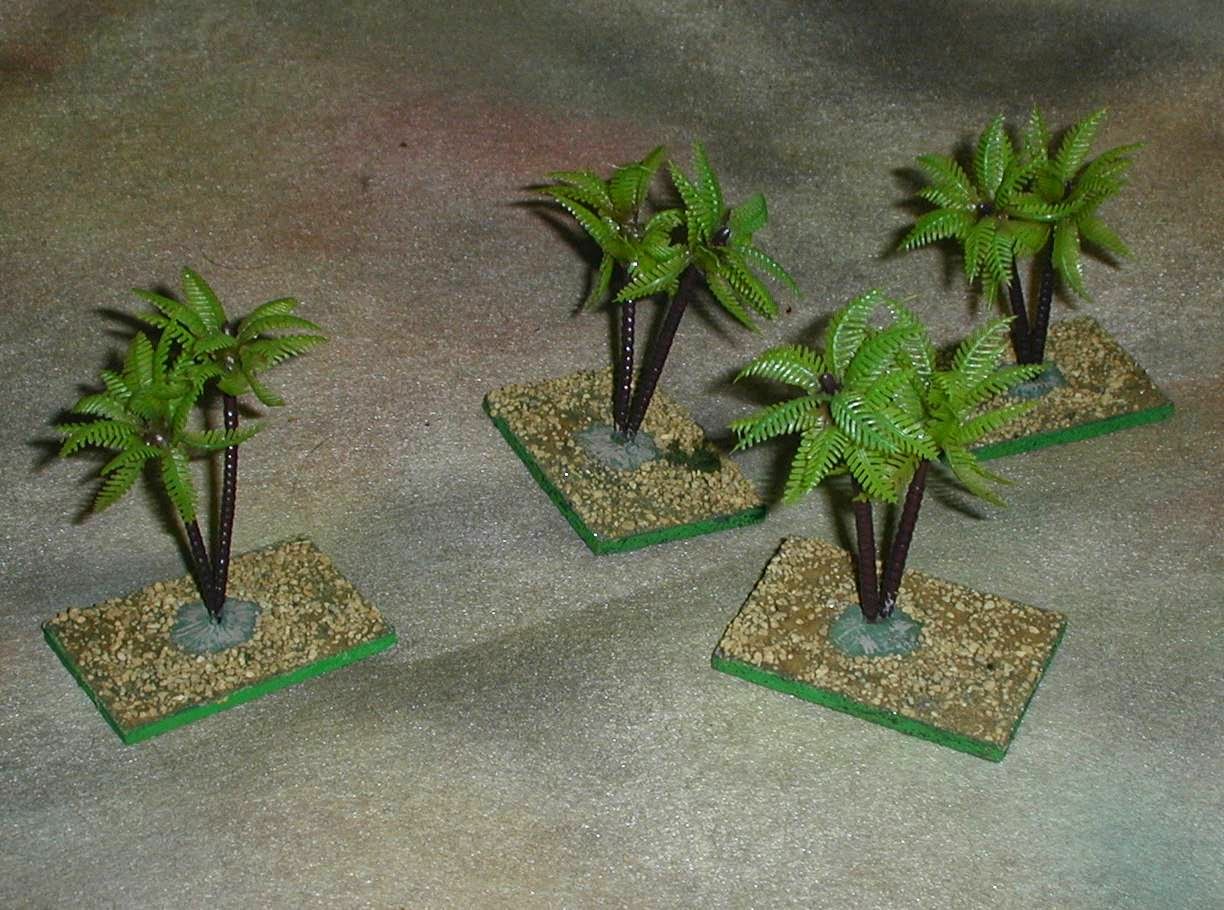 and also on the Desert cloth, the standard "cake decoration" types!
Posted by Gonsalvo at 10:11 PM 8 comments:

Email ThisBlogThis!Share to TwitterShare to FacebookShare to Pinterest
Labels: terrain

This post will cover the various Mission assignments, tailored for the Galactic Knights rules from Monday Knight productions. Once again, this is largely stolen, err, borrowed from Star Navy 5150, by Two Hour Wargames, which is itself highly recommended!  First is some general background common to all scenarios.

The Campaign map from Star Navy 5150 is used, minimally modified, as shown below. The Coordinates correspond to die rolls, 2 D6 of different colors (I have used red and blue for my example).


Thus the 1,1 coordinate is the planet itself, and the other 3 grey shaded boxes represent close orbits around the planet, and the next 5 boxes adjacent to those represent high or distant orbits around the planet. Movement on this map is from box (coordinate) to box, including on the diagonal. The minimum number of ships  for a player force moving on the campaign map is three; if you have fewer than 3 ships remaining then they must all operate together.

Star Navy uses Possible Enemy Forces (PEFs) to represent potential but unverified/unknown enemy contacts; some of these may turn out to be false alarms, and others will be determined to be actual enemy ships of varying types and numbers. We will do the same, using their system.

PEFs are generated at the start of each mission, and are placed randomly on the map according to the individual Mission guidelines. There may be more than one PEF in any given box.  PEF's may also be generated when doubles are rolled for the activation/movement of forces on the Campaign Map.

If doubles are rolled for Activation, AND the D6 roll is less than or equal to the current enemy Campaign Morale, an addition PEF is placed. Roll 2 D6 of different colors to determine the box for placement of this new PEF.

Each PEF is assigned an initial (surrogate) Crew quality by rolling 2 D6 and taking the higher score; rolls of 6 are treated as a "5". If/when the PEF is resolved to be actual ships, this temporary value is no longer used, but rather the Crew Quality of the force's Flagship is used instead (see below).

Both player and non player forces will move on the map; non player forces may be PEF's  or confirmed actual ships. Choose two dice of different colors, one each for the Player and Non player forces - say, white for the Player and black for the Enemy. At the start of a Mission and for each turn thereafter, roll the two dice together. Doubles are re-rolled, BUT they may result in the generation of new Enemy PEF's!. The side with the higher die roll determines who will Activate first. Only PEF's or ships with a Crew Quality higher than the die foll for their side can be activated (and thus move) - Raw = 2, Green = 3, Veteran = 4, Elite = 5. Once one side has moved all eligible forces/PEF's, the other side does so.

This is done in the same fashion as for PEF's, but by rolling against the Crew Quality of the Flagship of that force.

Activated player forces may move 1 box in the direction of their choice each turn they are active; this movement is optional.

Whenever a PEF enters a box on the Campaign Map containing Players ships (or vice versa), then the PEF must be resolved to determine if it represents actual ships, or was just a sensor bogey, and if actual ships, exactly how many and of what type and Crew Quality. The PEF is the removed and replaced with a marker for the actual ships, if any. Whenever player and non player ships (including those of previously resolved PEF's) are in the same box, then all Campaign Movement ceases and a tabletop battle is generated and fought using Galactic Knights. Play on the Campaign Map then resumes.

This is always the first Mission of a campaign, and is performed with a single squadron. Subsequent missions will be determined based upon the table already presented in Part 2 of this series. In the tables, "Scores": refers to the number of D6 that rolled less than or equal to the current enemy Campaign Morale.

Objective: To patrol the map and then return to your planet (If you are contesting the system, consider the planet in this scenario to be your local base of operations). When no PEF's are left on the map, the Mission is over.
Forces: You will patrol with a Squadron.
Deployment: Your forces will start in one of the Grey sections of the map. Generate 3 enemy PEF's and place them randomly on the grid by rolling 2 D6 of different colors; re-roll any Grey section results.
Special instructions: Play continues until all PEF's have been resolved, the player has been defeated, or any PEF enters the Planet box.

Objective: To destroy the space station defending the planet.
Forces: 1 Task Force, or more if desired.
Deployment: Your forces start in section 6-6; after the Mission starts, it may be divided as desired. Generate 3 PEF's and place them randomly, re-rolling any results in the grey areas. Also place an enemy Space Station (see below)  in the Planet box (1-1).
Special Instructions: Play continues until the Space Station has been destroyed, or the player has been defeated, or has insufficient force left to be able to destroy the station.

Objective: Prevent the enemy from destroying the space station defending the planet.
Forces: 1 Task Force, or more if desired.
Deployment: Your forces start in any one of the grey boxes; after the Mission starts, it may be divided as desired.  Also place a friendly Space Station (see below) in the Planet box (1-1). Generate 3 PEF's and place them randomly, re-rolling any results in the grey areas.
Special Instructions: Play continues until the Space Station has been destroyed, or all enemy forces have been destroyed.

Objective: Hunt down and Destroy any Raiders/Pirates in the area. To be a success, all PEF's must be resolved, and all opposing ships destroyed or driven off the map.
Forces: 1 Task Force. Enemy forces will be generated as usual, BUT Crew Quality will be one LESS than otherwise determined.
Deployment: Your forces start in any one of the grey boxes; after the Mission starts, it may be divided as desired. Generate 3 PEF's and place them randomly, re-rolling any results in the grey areas.
Special Instructions: Play continues until all Raider/Pirate ships have been destroyed or driven off the map, or the player has been defeated.

The above is adapted from Star Navy 5150 from Two Hour Wargames. Once again, I strongly suggest purchasing a copy or PDF  if you are interested in this campaign system (or the space combat rules themselves, which have been reviewed previously on this blog).

*The next post will cover Post Mission events, and hopefully some rules for Space Stations and Merchant Ships for Galactic Knights. 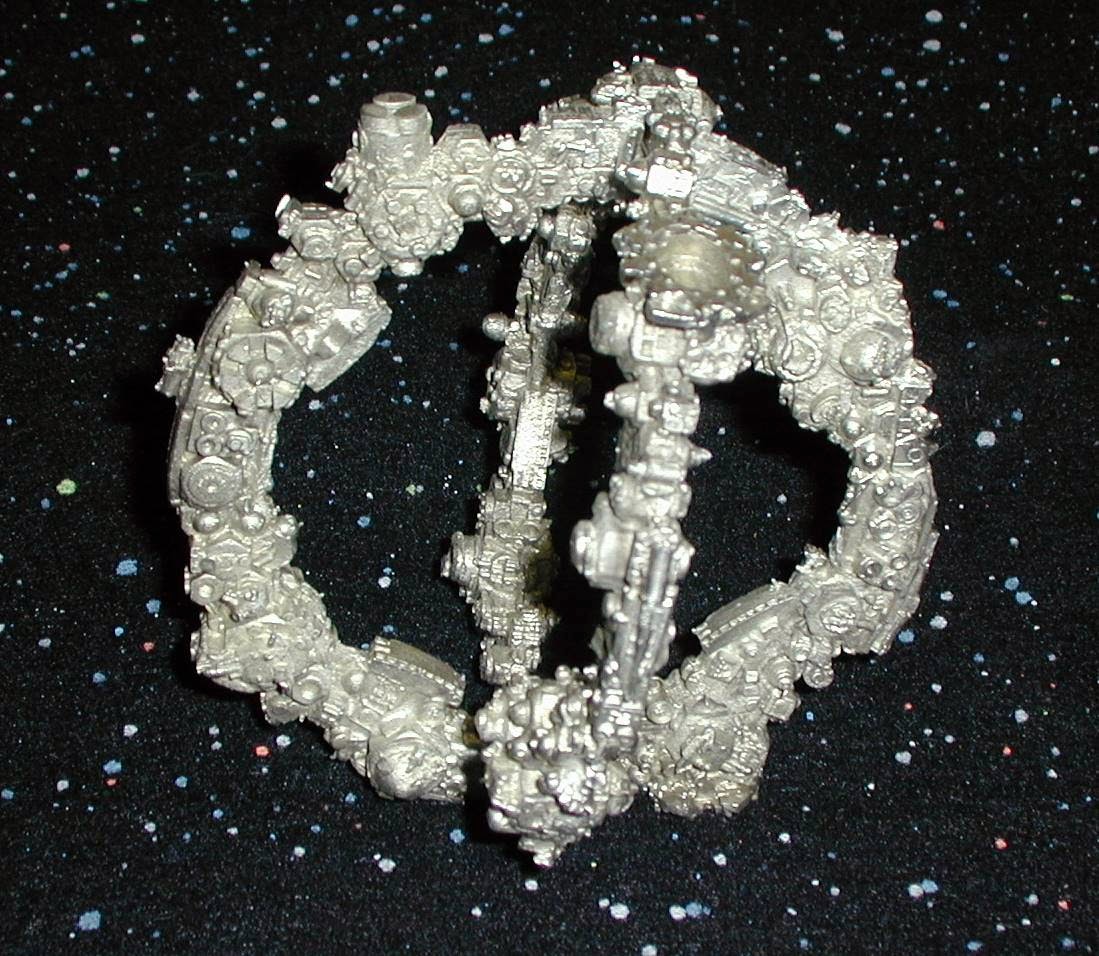 As a teaser, here are some pictures of the elusive Entomalian "Web" Space station. 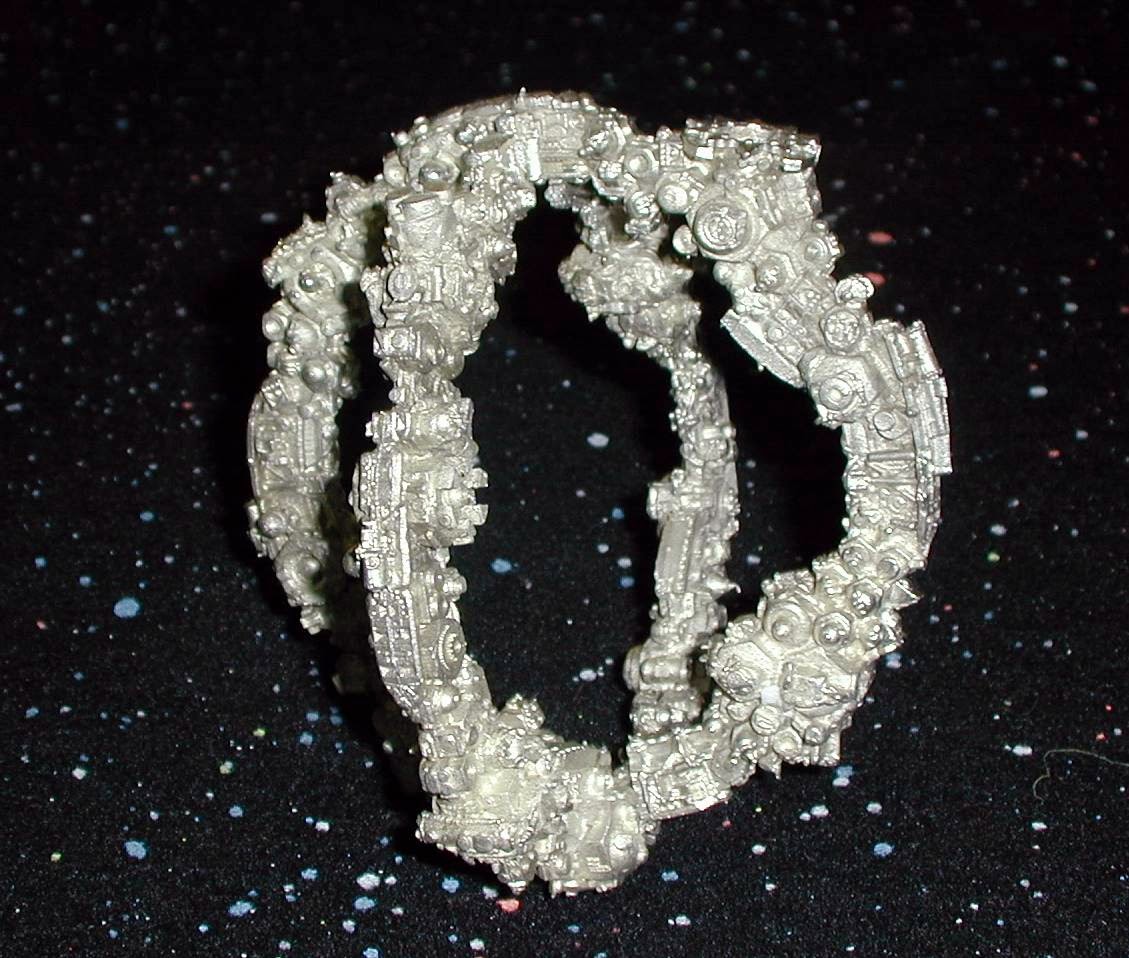 Back when I bought my original ships as part of the the Superior "Starfleet Wars" line, this was one of the last releases. The line went out of production before I was ever able to get one, or, for that matter the Modular Space Station. 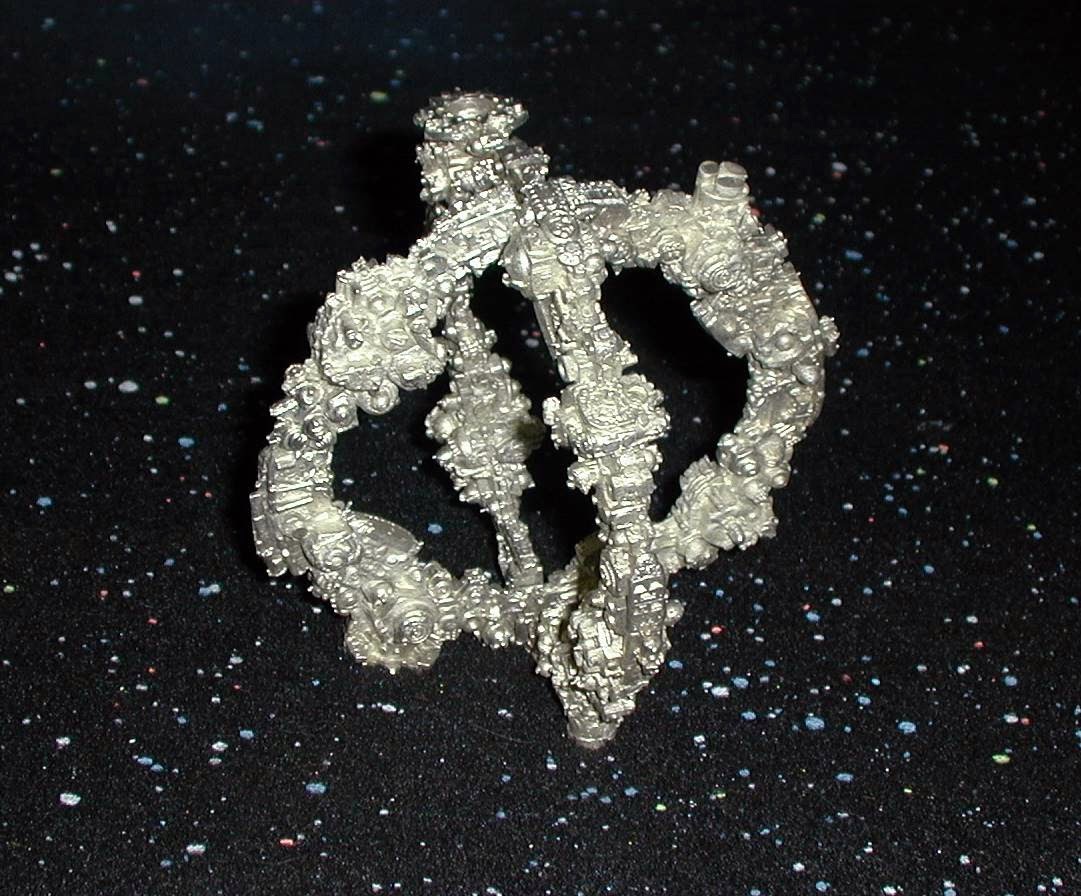 I happened to come across one available for sale on the Panzer Depot website a few years ago, and snapped it up. It no longer appears there. 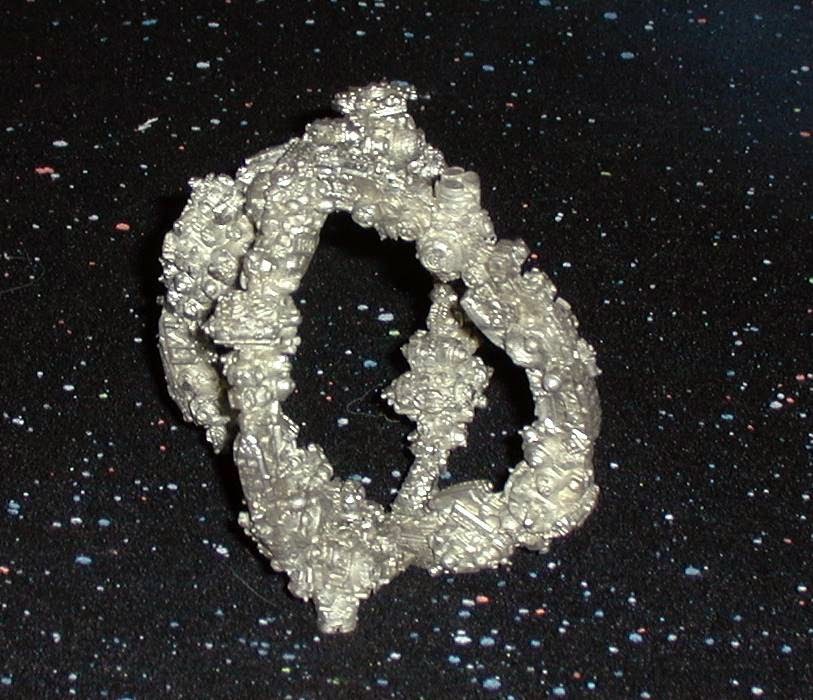 This what it looks like unpainted and unprimed, dry fit together (see below). 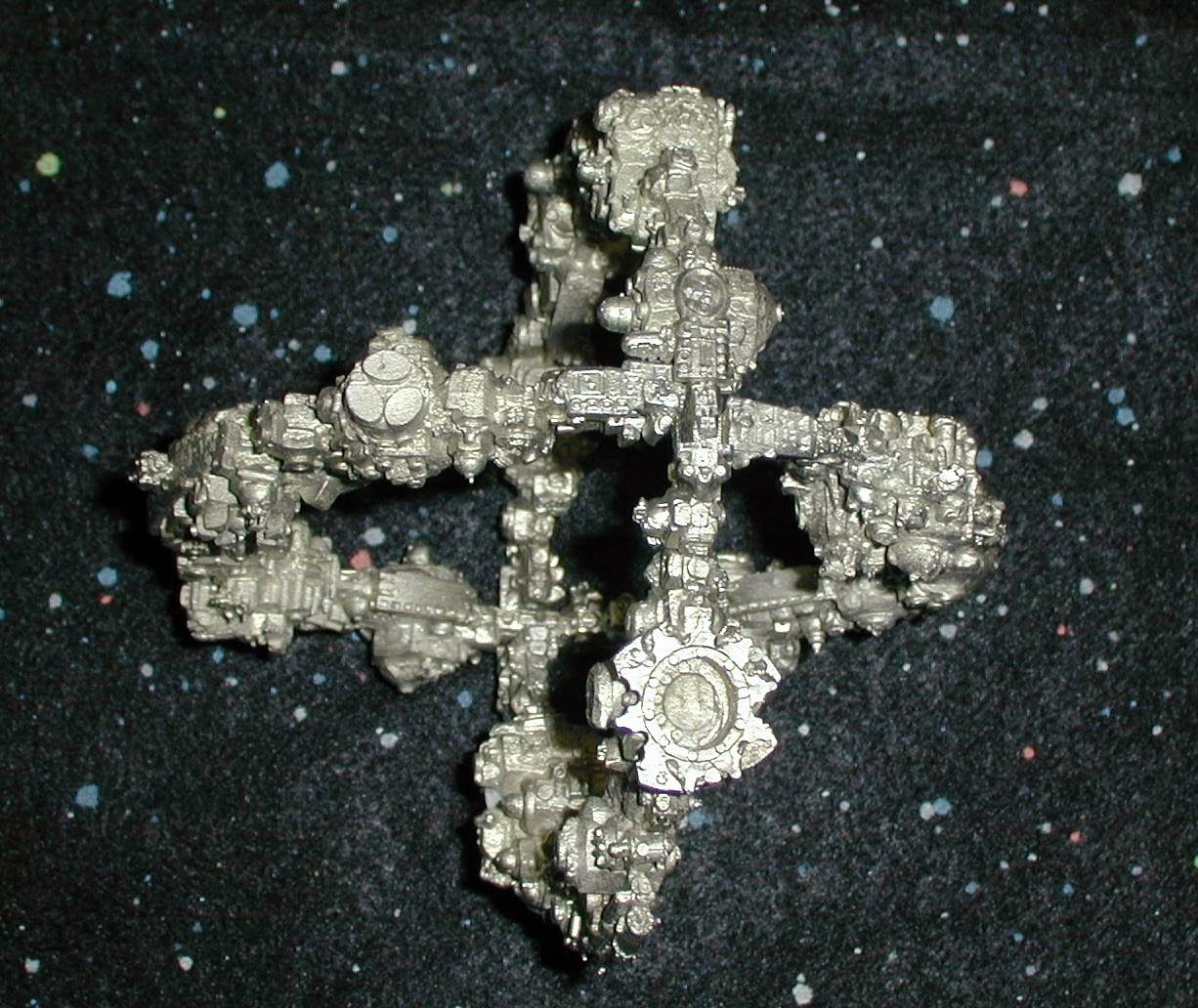 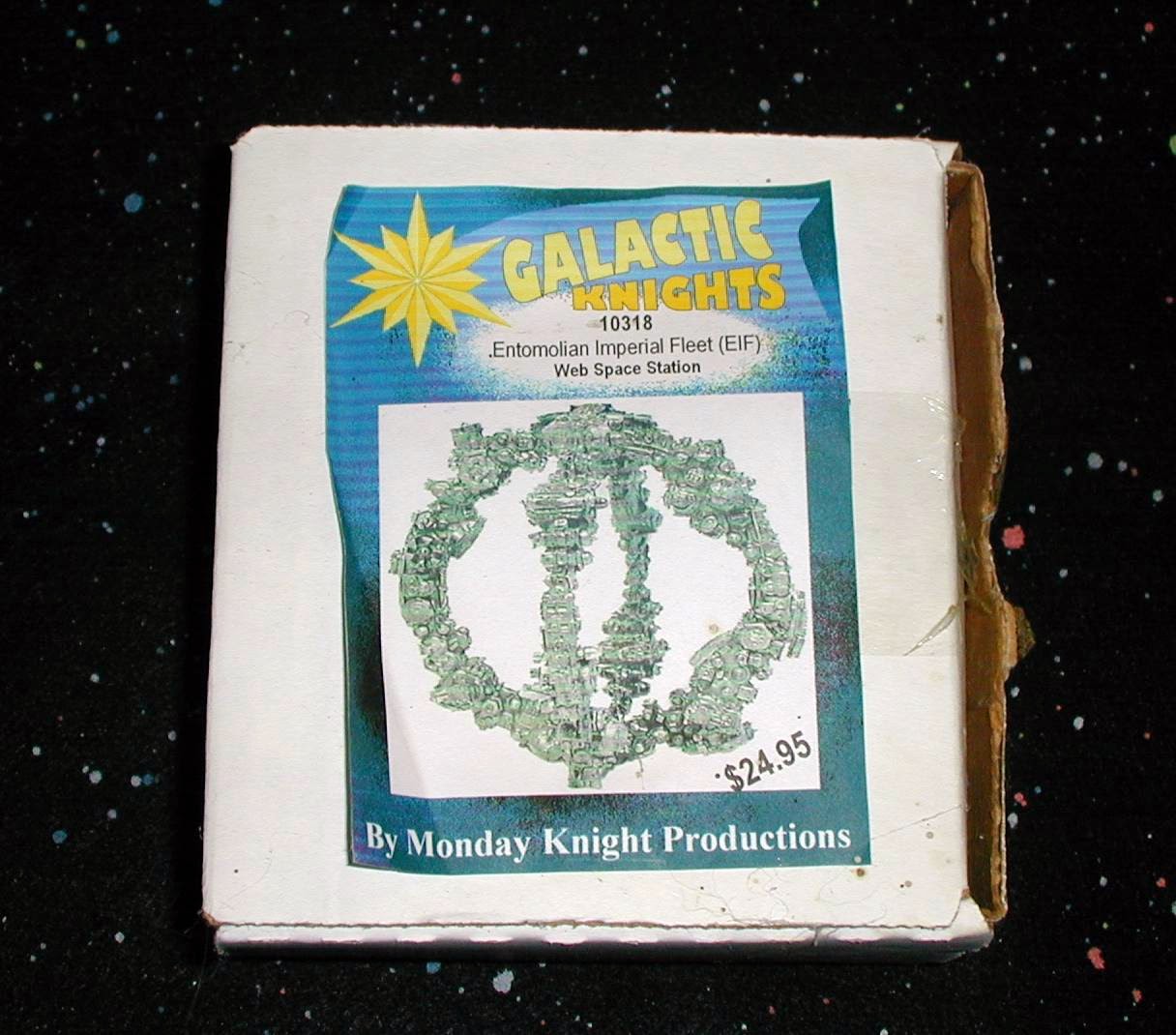 The box the Web came in, with the Monday Knight Productions - Galactic Knights label on it; I have never seen it on their website, however. 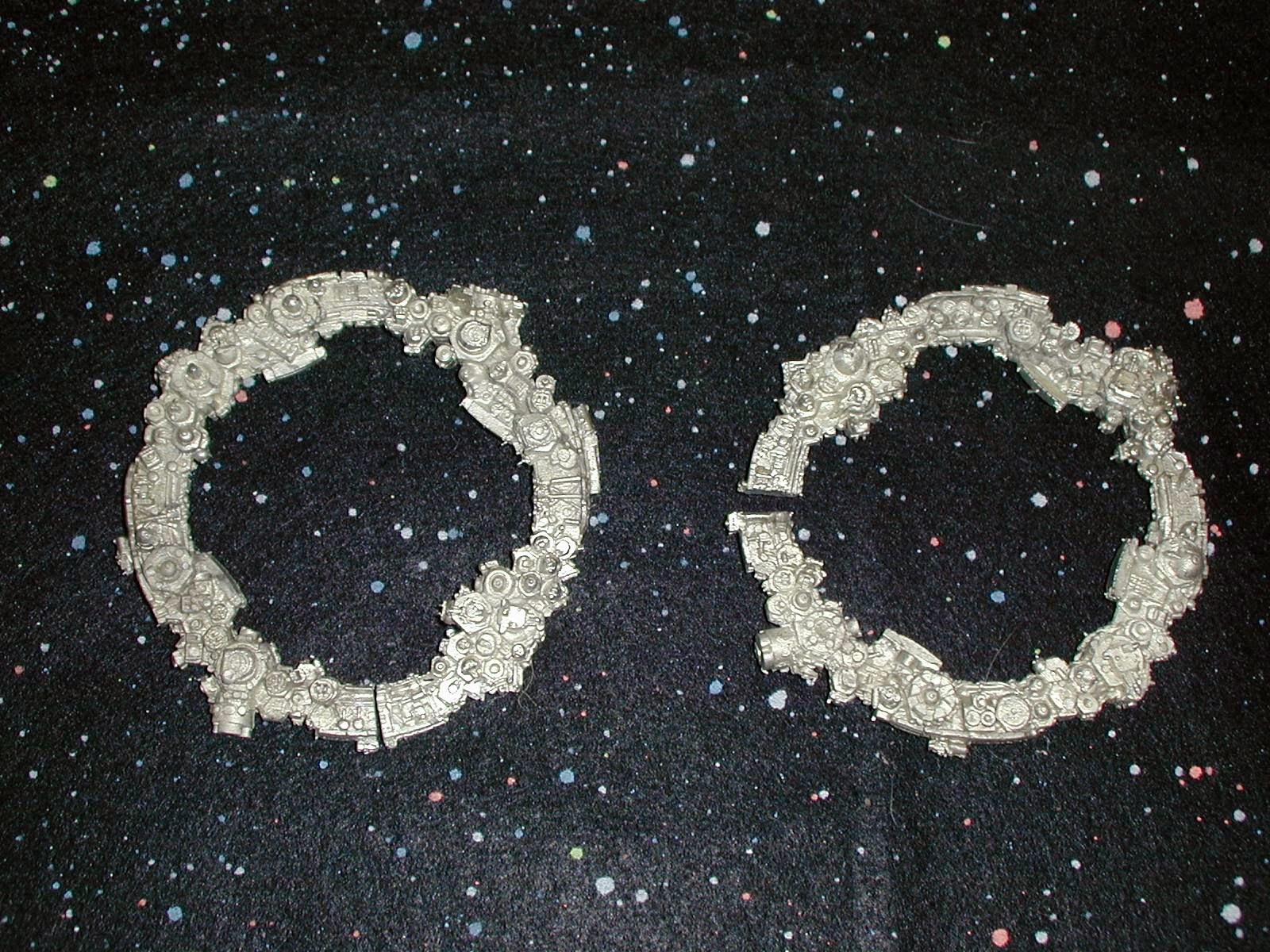 It comes as 2 separate rings as above. The cut in the left hand one had to be spread apart a bit wider in order to assemble it. 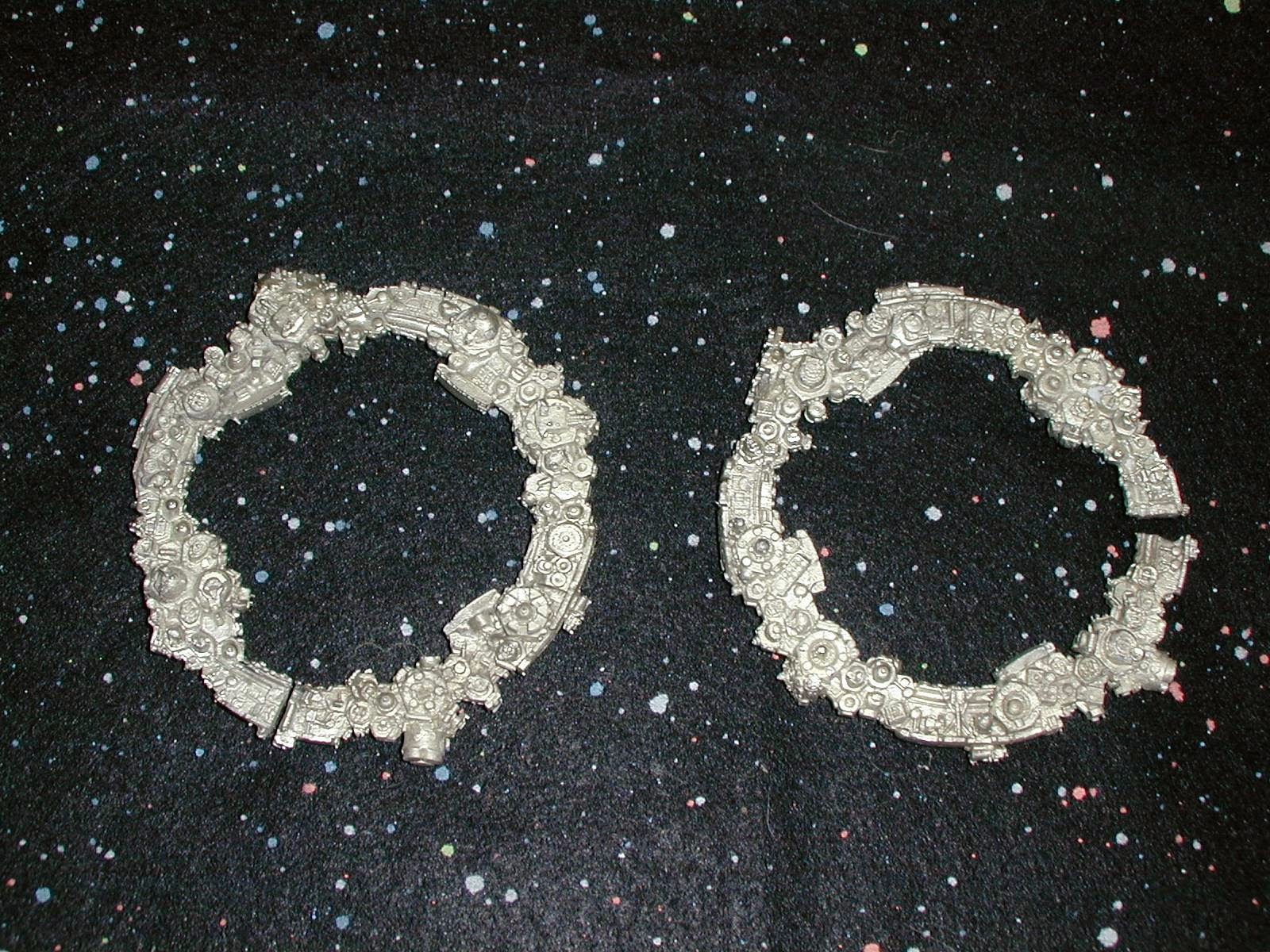 Reverse sides of the two rings, which I think are identical.
Posted by Gonsalvo at 8:25 AM No comments: