Vauban's Wars is a set of rules by Eric Burgess, now in final playtesting and development,  for conducting sieges on the tabletop. There is a fairly detailed description/discussion of the rules concepts on Eric's blog. While it is designed for the 18th century, it is hardly a stretch to use them for the Napoleonic era, and with modifications by the gamer they could easily be used for as far back as about 1500 AD. If you're like me, you've probably already got a castle, fort, or similar in you collection. If not, there are some great, inexpensive ones available from the folks at Paper Terrain, as well as more expensive (and much heavier) resin and plaster alternatives available elsewhere. Those with more talent and time than I might even have scratch built one. Regardless, if you're like me yet again, that lovely model has mostly sat around looking good on a shelf, but gathering dust from lack of use.
Be prepared for these rules to change all of that! First, if you've ever fought any kind of campaign in the gunpowder era, sooner or later a siege scenario is going to come up.  These rules would fit perfectly for that situation, but they are really designed to allow you to set up a siege game in isolation, and test your skill against those of Vauban, Coehorn, and the other master military engineers, and produce a fun game that will reach a definite conclusion within a single gaming session, or two at most.
While we don't tend to think much about sieges in the Napoleonic era, in fact there were quite a few important ones, including Genoa in 1800, Danzig in 1807, Stralsund in 1809, and Hamburg in 1813-14. The campaigns in the Peninsula in particular were full of notable sieges including Valencia, Saragossa, Gerona, Astorga, Almeida, Cuidad Rodrigo, Badajoz, Tarragona, Sagunto, Cadiz and Pamplona.
Perhaps the most famous siege of the Revolutionary and Napoleonic Wars, however, was the siege of the immensely strong fortress of Mantua during General Bonaparte's first Italian campaign. After kicking (or scaring) the Austrians out of Lombardy, Mantua was first invested on June 3, 1796. Limited siege supplies, limited availability of troops, the marshy environs, and repetitive Austrian offensives over the alps lead to both slow progress and out right abandonment of the siege on no less than two occasions; the Fortress did not finally fall until more than 8 months after the siege commenced. This was our second siege using these rules, and the scenario was loosely based upon this situation. We started our game with but 2 weeks of summer left, in mid August of 1796. Each siege turn in VW represents a week. 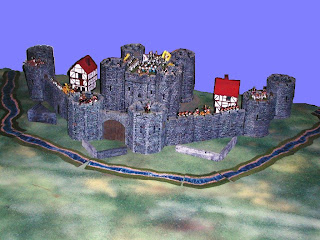 The Austrian Fortess has 3 bastions and three ravelins, and is surrounded by a water-filled moat. The high water table precludes any mining (something we did do in out first playtest game several months ago). The garrison consisted of the Commander, 3 Fortress batteries, 4 Line Infantry, One Grenadier, and one Elite Light Infantry unit, plus an additional 2 medium and one light battery, augmented by a spy! That is my 20+ year old Gallia castle serving as the Fortress! 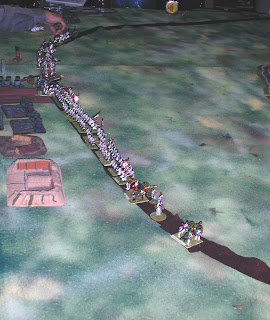 The siege commences just after the French have completed the 1st parallel of the lines of cirumvallation. The French have two siege guns, 2 heavy guns, 2 Light guns, and a heavy Mortar, plus an awful lot infantry and grenadiers. (The items behinds the long trench lines are supplies for trench and gun emplacement construction). 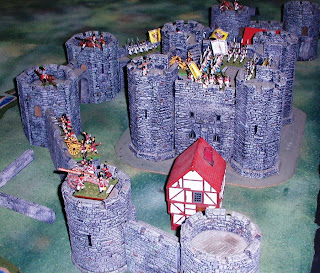 Close up of the Austrian defenders, lead by none than General Andreas Petrosic (yours truly). Although the General is depicted upon the ramparts, he evidently spent most of the siege in his favorite tavern, the Prancing Pony. Perhaps that explains the relatively passive conduct of the defense by the Austrians? 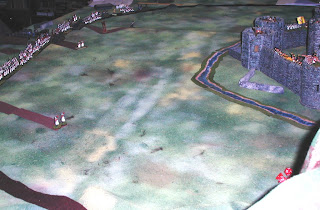 French sappers have started the saps that will enable them to construct the Second parallel (usually at medium range for artillery). 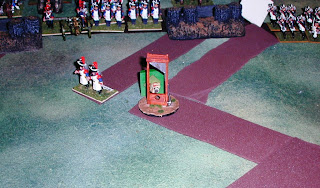 A French spy was captured in the city, and hung on the walls as a lesson to others. French morale declined, and when the body was cut down, evidently the Commissioner of Public Safety attached to the army determined that decapitating the body after the fact would some how prove motivating. Uh-huh. 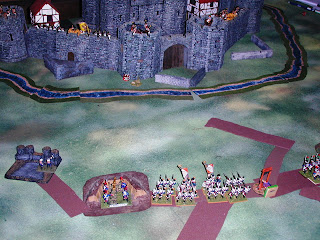 The second parallel is largely completed, and saps towards the fortress are in progress to start the 1st parallel at Close range for artillery. The risk to the sappers in particular increases as they approach, and the sap head is empty because I finally managed to kill one of them with a heavy barrage of fire from multiple batteries. Ultimately, this liberal use of powder consumed a fair percentage of my reserves. A captured  Austrian spy this time can be seen, ready to test out the Veg-o-matic. The gun emplacements are allowing the French to pound the front bastion severely - the die indicates it has been reduced from level 5 to level 4, and the rocks indicate several hits towards dropping it still another level. The defenders sappers are not yet in position to attempt to repair some of the damage. I should have made use of the opportunity to conduct some surprise trench raids at this point, but kept forgetting to use that option! 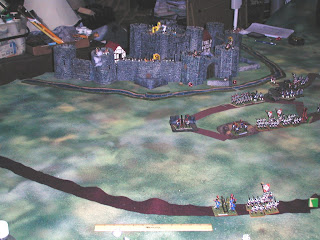 Distant view of the Fortress, showing the Third parallel under construction. The French have shifted their targeting to the Ravelin (the triangular outworks in front of the Bastion), and in response the Austrians have sent a sapper into the Ravelin to try to keep up with repairs. Meanwhile, as the siege drags on and the food supply gets lower and lower, the populace have become increasing restless; by the end of the siege, I have had to put down at least 2 popular rebellions, and have twice had my units on the walls attacked by angry mobs! Being the Governor of a besieged city isn't all fun and games, after all. Being the officer in charge of a siege isn't a life of luxury, either; by the end of the siege, Barry (playing the sans-culottes) will have had both his Commander and subordinate killed, as well as their first replacements! General Petrosic decides to head for another stein at the Prancing Pony. By this point in the siege, though, the beer is definitely strongly resembling Horse p***... if it isn't largely composed of it in actual fact, which it may well be! 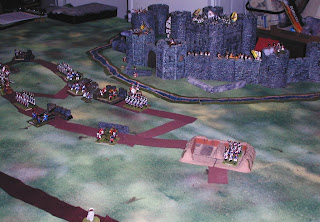 The Ravelin has been reduced to rubble, and the Austrian sapper is feeling very naked! In the event, despite being shot at by multiple French guns, he is ultimately able to scramble back inside the Fortress to relative safety. At this point, I really should have stationed my medium guns and an infantry unit in the two remaining Ravelins where they would have threatened to enfilade any attackers closing on the wall. But no, having given up on the beer, the good General was evidently sampling the now rather undernourished barmaids! 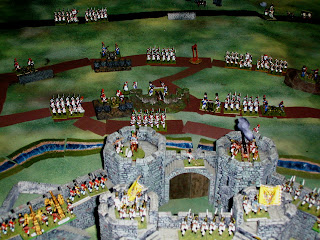 Well into Autumn by now, some heavy rains halt further action this week, but the French have now dug a final parallel right up to the edge of the Moat! 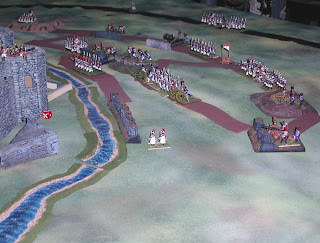 Gun emplacements almost at the foot of the walls; the Bastion is now down to level 3; when it reaches level 1 there will be a breach! A heavy downpour floods one segment of  French trenches, but it is too late to have any real impact upon the siege. The Austrian defenders step up their shooting as their food is running very low and a breach in the walls appears imminent; they do manage to knock out several gun sections, but it is too little, too late!  Where is Wurmser and that relief army, damn his eyes! 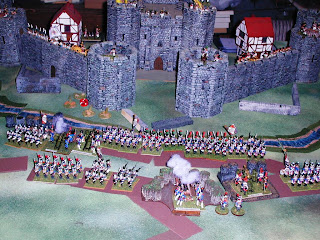 Week 14 of the siege; it will be Winter next turn, and the defenders are down to zero food. The Governor passes a test and the populace remains quelled, but it is now just a matter of time before they rise up and turn the city over to the enemy. With the walls breached and French Grenadiers massed for the assault, Petrovic asks the second replacement French Commander, one Francois Barras by name, for terms. Otherwise, should the coming French assault succeed, a bloody sack of the city by the enraged besiegers is likely, with all the horrors that entails - the usual rape, pillage, and murder.
Say, does anyone know where a thirsty ex-General can find a decent cask of Brandy?
-----------------------------------------------------------------------------------------------------------
We had a great time with this one. It was quite different being inside the Fortress instead of besieging it as I was last time. We identified a few rules points and questions, but the game went by quickly, and generally smoothly. Espionage was mostly suicidal this time out, but the French did score one key intelligence success. The French Heavy Mortar actually managed to have some impact on the Morale of the defenders, but as it turned out they were so generously supplied that it had no real impact upon the outcome. In different circumstances, though, the impact might have been significant. The game played out well, with a number of unique and dramatic events.  Highly recommended!
Till next time,
Peter
Posted by Gonsalvo at 12:16 AM