The Austrian artillery arm didn't perform very well in the War of the Austrian Succession, and that lead to wholesale redesign of the ordnance to produce lighter guns that would be more maneuverable on the Field of Battle. In the Seven Years War, the new Austrian pieces were so admired that most other powers in Europe copied their designs; even Gribeauval had served with the Austrian artillery in the 7 years war, and was probably heavily influenced by the experience. Austrian artillerists received several years of training, and better pay than their infantry and cavalry brethren, at the price of a longer term of enlistment (14 years). By 1809, though, the once cutting edge Austrian guns had fallen somewhat behind the rest of Europe, especially the French.
Austrian artillery companies (batteries) came in five types by 1809 (not including siege units). The old 3 pounder regimental guns were discontinued, but the light guns still saw some use as 3 pounder Brigade batteries, usually of eight 3 pounder guns each. In addition, Grenz units sometimes retained their attached 3 pounder guns. There were three kinds of 6 pounder batteries. First were the  6 pounder Brigade batteries, which again had eight 6 pounder guns, and were generally assigned to Infantry Brigades. Second were the 6 pounder Position (or Support) batteries, which had four guns and two 7 pound Howitzers, and were generally assigned at the Divisional level. Third were the Cavalry Batteries, newly established in 1778, which also had four 6 pounder guns (of different and lighter design) and two 7 pound howitzers. They were generally assigned to cavalry Brigades or Divisions. Finally, each Corps generally had two or three 12 pounder Position (or Support) batteries, each of four guns and two howitzers, There was no Army Artillery Reserve, as there was in the French army.
With that background, we're going to proceed on a tour of the artillery and related support units of my miniature Austrian army. 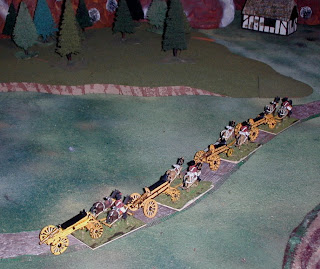 These are 2 Austrian Cavalry batteries; the elongated trails and the upholstered "wurst wagon" seats (on top of the ammunition cases, upon which the crew rode astride) are very distinctive. I use Limbers for my Austrian Cavalry batteries in lieu of crew to help them stand out. For that reason the drivers are wearing the brown coats faced red of the Austrian artillery; properly these would by driven by troopers of the Fuhrwesencorps, who usually worse white coats faced Emperor Yellow, although Brown coats were an option. They usually wore black/yellow/black brassards on their left upper arm as well. This organization also handled the transport wagons, and was separate from the artillery organization, which probably wasn't the best arrangement for co-operation and efficiency!

The Austrian artillery carriages were famously painted yellow ochre - the colors I've used are probably a bit too bright; perhaps I'll go back some day and try staining them with a yellowish brown to dull them a bit. The metal fittings were painted black. Evidently the gun barrels were painted black as well, presumably to keep up the black and yellow Hapsburg color theme. This seems odd to me, as usually only guns with iron barrels were painted (in order to reduce rusting). One would think that paint used on bronze barrels would burn off pretty quickly once the guns were in action! In any event, my units all have guns with bronze barrels. 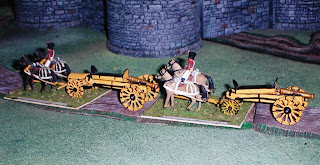 A view of the second battery - not the somewhat different style of limber of the first gun. The drivers, limbers, and guns are all Minifigs. I have deliberately only used two horses to pull the limbers instead of the 4 to 8 that would have been used. This is to save cost and space! 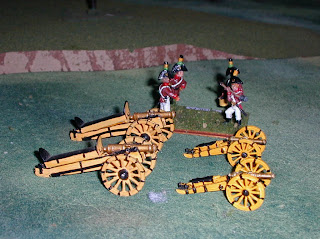 I only have two Cavalry batteries in my army, and would really like to add one or two more. I tried using some 25mm Old Glory guns - the pygmies you see out in front in this shot are them - look like 15mm models, don't they? Most unsatisfactory. I'd love to get my hands on some more Minifigs Cavalry guns... or even better, see Sash and Saber make  them - they make an Austrian (foot) 6 lber and Howitzer, so what gives with NOT making the most easily recognizable ordnance of the entire Napoleonic Wars?  Maybe someday soon? 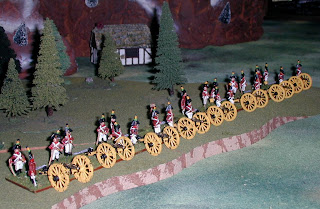 Here we have no less than four batteries of 6lber Foot guns. These are all Old Glory crews with Sash and Saber guns. By the way, evidently both the artillery and specialist units had drummers as part of their establishment; they wore the same scalloped white lace on the collars and cuffs, and the facing colored wings with scalloped lace and central rosettes as the infantry. 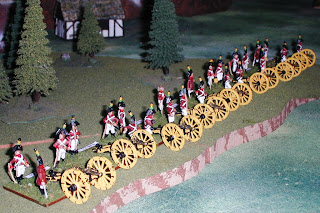 Another view; the crew wear the traditional brown coats with red collars and cuffs of the Austrian artillery. I could have included some figures with light blue facings, representing members of the relatively unskilled Handlanger corps, whose job was primarily to assist with the movement and positioning of the guns, as opposed to the actual firing. Doubtless considerable cross performance of duties occurred in an actual battle! 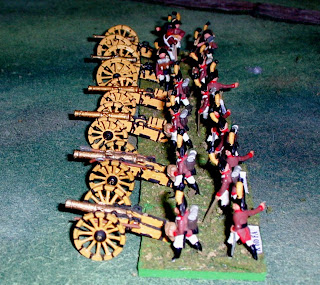 This next group of three batteries (all my batteries gave 2 model guns with crew) are Minifigs, both crews and guns, except for the farthest unit which has Sash and Saber guns. I think these 30 year old Minifigs stack up quite well against the Old Glory crew figures, and even the excellent Sash and Saber guns. 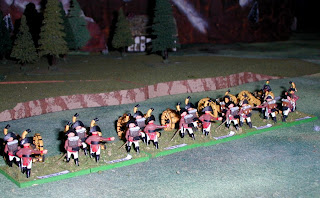 A view of the Minifigs 6 lber units from behind. The only draw back is the relatively limited number of poses for the crews. I have painted the artillery in a relatively red-brown shade, as is usually depicted. The Osprey on this subject shows the coats in a lighter brown of a decidedly orangish hue. Officially, the color of the coat is rehbrun 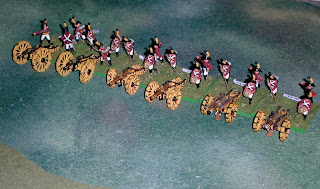 A final view of the Minifigs units - note the water buckets hanging from the underside of the carriage on the two units farthest to the right. 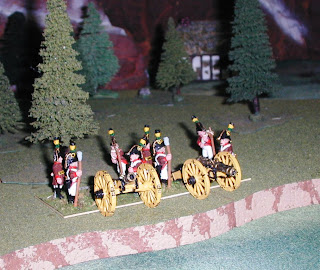 Here is a 12 pounder Position battery. The crew are Foundry for this unit, Sash and Saber guns. 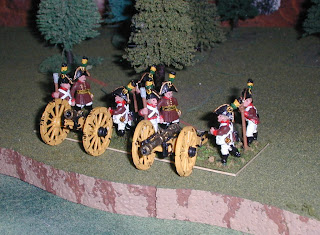 Another view; to help differentiate my 12lber batteries, they have four crew figures per stand instead of the three figures of the 6lber batteries. I also like to use a Howitzer and a 12 lber model for these units, or at least the Austrian 12 lber batteries. 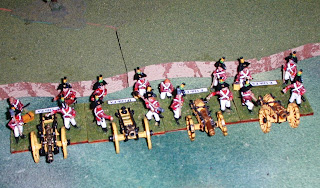 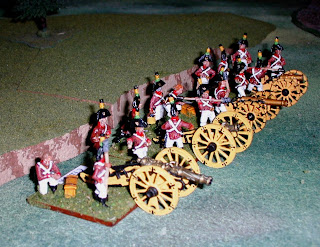 Another, closer view of the two 12 lber batteries seen in the previous shot. 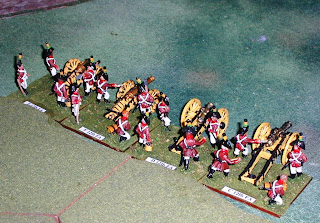 A final, rear view; if you look closely, you can see that some of the figures have the drag ropes coiled and carried at the rear of their jackets - the famed "bricoles"! 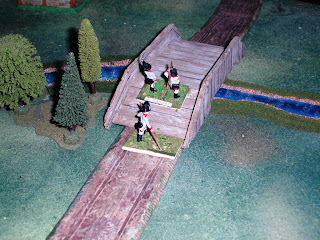 Minifigs also made a small set of Austrian Pontoniers, which I have painted as sappers. The Sappers wore a blue-grey to blue coat (too light and neutral a shade has been used here) with red facings, and a corsehut. The uniforms of the Miners and the Engineers (all officers) were essentially the same aside from minor variations in the colors of the plumes (when worn at all). 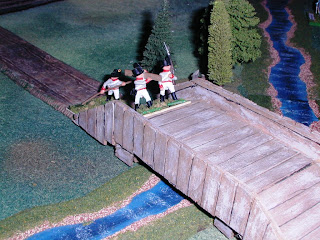 Another view, perhaps repairing (or mining!) a bridge. The pioneers, who assisted the above units with largely unskilled manpower, wore a similar uniform with grey (or less commonly, blue grey) coats with dark green facings. 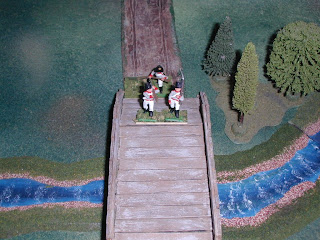 Finallly, the pontooniers wore ﻿a medium to dark blue uniform (this time including the pants as well) with red facings, and once again the corsehut. There was also a battalion of Danube boat handlers raised from among the Grenz; by 1809 they wore a plain shako and a medium to dark blue jacket with red facings (pointed "Hungarian" cuffs with the "bear's paw" lace) and light blue Hungarian pants, complete with the yellow/black braid and knots.
A few more parting shots of some of my Austrian artillery...  the lone officer is supposed to be Oberst Smola, "Father of the Austrian Artillery" of this era. 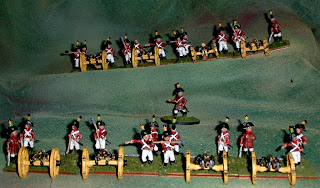 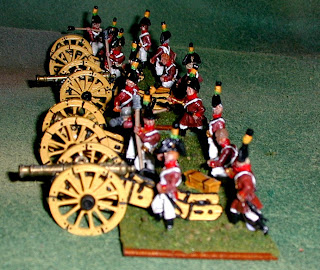 Good gaming,
Peter
Posted by Gonsalvo at 12:14 AM