Horse Artillery, where the crew are mounted and/or ride upon the limbers, etc., date back to Frederick the Great, but saw wide use starting with the French Revolutionary and Napoleonic Wars. ﻿Mounting the gunners made them more mobile, so as to either accompany Cavalry formations, and/or be used as a mobile reserve, more easily repositioned than their foot slogging brethren. The first French Horse Artillery was formally organized in 1792, initially wearing uniforms similar to the foot units; within a few years they adopted uniforms reminiscent of the chasseurs and hussars in style, if not coloration. They certainly considered themselves the elite of the Line artillery; horse artillery was certainly expensive to maintain!
In 1804 there were six regiments of six companies; some regiments later added a 7th company with the absorption of the Dutch Horse artillery (1810) and other expedients (1813), rising to possibly 8 companies by 1814. Each company crewed a battery, usually composed of six of 6 or 8 pounder guns, but sometimes 4 pounders were used; howitzers could be substituted for two of the guns. the composition of a company, even  theoretically, varied somewhat over time, but generally included roughly: 4 officers (1-2 Captains and 2-3 Lieutenants), 10 NCOs (1 Sergeant Major, 4 sergeants, 1 Corporal, 1 Fourrier), 24 Gunners 1st Class, 35 Gunners 2nd Class, four metal workers, four carpenters, and 2 trumpeters.
When I first planned my "new" French Napoleonic Army, I had only two units of these superb troops. Dating back to my original Scruby armies of the 1970's, I've used 2 mounted gunners and one of foot to really make it clear that these are HORSE batteries; indeed, I believe this may even have been Jack's suggestion in his catalogue! For most nations, if there are no specific mounted horse artillerists, their Light Horse and/or Dragoon figures will be suitable. 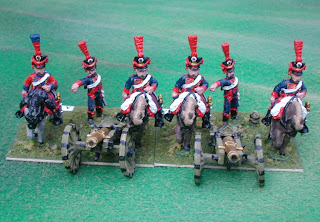 This is my First Horse Artillery Company (The term Battery didn't come into general use until well after the Napoleonic Wars); Foundy figures and Minifigs guns. They wear the flamboyant Hussar style uniform (sans pelisse, although Horse Artillery Officers often wore them in place of or with the dolman). Being the first battery, it of course includes a mounted trumpeter! 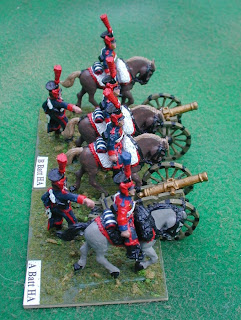 Here we get a good view of the trumpeter, wearing reversed colors on his dolman, i.e, a red jacket with dark blue braid, collar, cuffs and turnbacks, the later with red grenade emblems. Like the cavalry, he is mounted on a grey, and his sheepskin is black with red "wolf's teeth" edging. 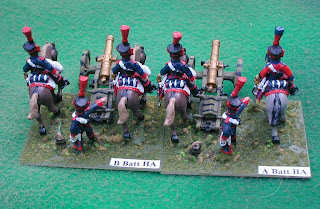 If this was post 1811, he would presumably wear that boring Imperial livery - green jacket with dark blue collar, red cuffs and turnbacks, and the special red/yellow/green lace liberally applied. 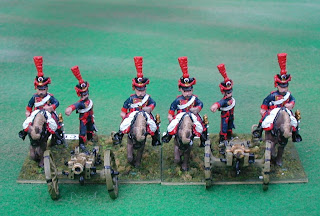 This is my second Horse Battery, again Foundy figures with Minifigs guns. The gunners wear dark blue dolmans and pants, with dark blue (or sometimes red) collars, and red cuffs, red turnbacks (with dark blue grenade ornaments), red lace on the dolman, red stripes down the outside of the pants and red knot or spearhead decorations of the thighs,  as well as red plume, shako cords, and light cavalry edging and tassels on the boots. The trooper s have white sheepskins with red wolves teeth edging. 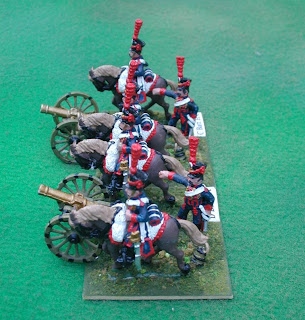 Another view of my second Horse Artillery company; to show a limbered battery, the gun model is reversed and placed behind the stand, muzzle pointing backwards. For all, the buttons and shako plates are brass. Barrell sashes are dark blue and red alternating. The sabretache should have the regimental number in gold, often over crossed cannons, and a green laurel wreath design, details not painted on here, 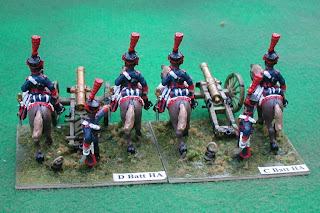 A final view of the 2nd company, note the buckets! Evidently, there was an official pattern to the color of the horses assigned to each gun of the battery. In 1812 the official colors of horses for the 8 pieces in every battery were: for the 1st cannon - whites, 2nd cannon - pales, 3rd cannon - red bays, 4th cannon - chestnuts, 5th cannon - bays, 6th cannon - blacks, 1st howitzer - brown piebald, 2nd howitzer - black piebald.  Doubtless this would have been difficult to maintain in peace time, and in war time... surely impossible! 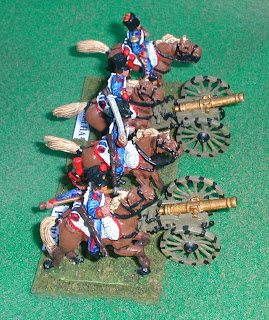 As I started expanding my French Infantry (and running bigger scenarios, starting with Austerlitz in 2005), it became clear that I needed to add another Horse Artillery company. Just as the Empire became increasingly strapped for cash, having four mounted figures per unit was getting to be expensive. Here I used the four left over figures from the 20 man Sash and Saber Chasseur a Cheval Regimental pack to depict the less flamboyant uniform of the later Napoleonic wars. The gunners on foot in this unit are Minifigs. 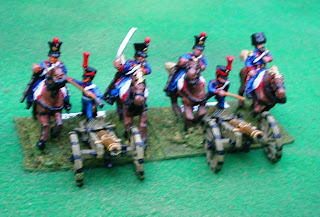 Gone are the cords, plumes, and most of the lace - at least from the mounted figures. The Captain does wear a Colpack, and has gold epaulets and other ornamentation. He might even at this late date still sport a dark blue pelisse with gold braid and black or grey fur. If he had the shabraque on his horse, it would be dark blue with gold edging. Barrell sash, if worn, would be gold and dark blue. Senior officers (colonel) had white plumes, when worn at all. 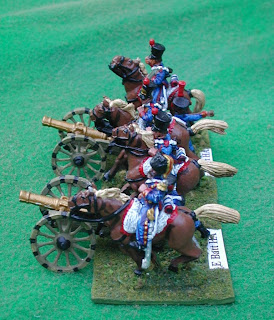 A final view of my 3rd company, showing the gold edging on the bag of the officer's colpack, as well as the gilt buttons and red stripe down the outside seem of the pants. Note also the improved horse painting compared to the original two units! 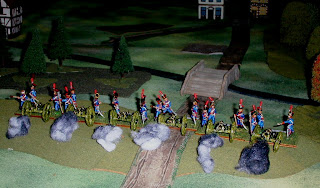 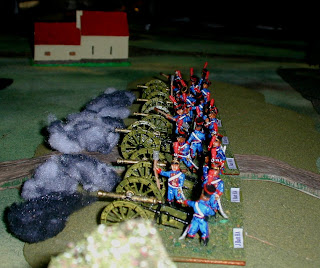 My 4th, 5th, and 6th Horse Artillery companies in a firing line; Old Glory figures with Sash and Saber Cannons.

Final view of the last three companies from behind. In real life six guns would form just one battery, and the guns would be spaced out much more, with the ammunition wagons stationed well behind the gun line. BTW, Marmont was colonel of one of these regiments (the Second) from 1796 - 1799, until he was promoted to Brigadier general, and of course ultimately Marshal of France.
Until next time - Good Gaming!
Peter
Posted by Gonsalvo at 1:04 AM