Jan Hus was born into a relatively well to do family in small farming community of Husinec, in Southern  Bohemia circa 1370, He showed early intellectual promise, and was accepted into Charles University ion Prague in 190. He would go on to earn a Bachelor of  Arts degree in 1393, Bachelor of Theology in 1394, and Master of Arts in 1396. In 1398, he was chosen for University post and began lecturing in Prague. Among the texts he used were the writings of the English religious reformer, John Wyclif. Hus was ordained a Catholic priest in 1400., and in 1401 he became dean of the philosophical faculty of the University, and Rector in 1402.

In 1402 he became curate of Bethlehem Chapel, a financed and built by zealous Prague residents in 1391, with the goal of fostering preaching in the Bohemian language.  This seems to have deeply affected Hus, who had a spiritual awakening. Like Wyclif, he supported translation of the Bible into the vernacular, its place as final authority, the fallibility of the Pope, limiting the temporal power of the Pontiff, and the wealth of the clergy.

Hus also took issue with Catholic doctrine regarding the Transubstantiation of the consecrated bread and wine of the Eucharist, supporting instead an alternate concept called consubstantiation or "remanence", holding that substance of Christ's Body and Blood exists concurrently with that of the bread and of the wine. The argument in Bohemia, which Hus him,self tried to sidestep until shortly before his death, was that the benefits of he Eucharist were not conveyed by receiving solely the bread; "Communion ion Both Kinds", i.e., both the bread and the wine, was deemed necessary.

Political unrest between King Wenceslaus IV of Bohemia (who had been elected Holy Roman Emperor 1376, but deposed in 1400) and the church lead the King to appoint Hus Rector of the University in Prague a second time.The Archbishop of Prague,. Zbynek, summoned Hus before the Czech Inquisition and denounced him. The Great Schism of the Papacy was further confounded in 1409, with the establishment of the short lived Pope Alexander V in Pisa (with Pope Benedict XIII still in Avignon and Pope Gregory XII still in Rome!). Alexander supported Zbynek, , who ordered Wyclif's teachings suppressed and forbade Hus from preaching in Bethlehem Chapel, both of which edicts Hus ignored. Both men appealed to rival Popes, with Zybnek winding up ordering that Wyclif's books be burned in the courtyard of the Episcopal palace, and excommunicating Hus and his followers. Hus had become very popular, with many Bohemians viewing him as a divinely sent leader. Thus, these actions provoked widespread rioting in Prague.

Over time, however, Hus' political naivete cost him the support of King Wenceslaus (who was definitely not the one of the Christmas Carol, that being his namesake from the 9th century). In 1411, all of Prague was placed under a Papal interdict, closing churches, ending baptisms, marriages, and burials, and proclaiming a general excommunication. Hus refused several summons to appear in Rome and his own excommunication was reaffirmed. Excommunication was extended to any who gave Hus support of any kind. Wenceslaus insisted Hus and his more strident supporters leave Prague, and he entered voluntary exile about 40 miles away for the next 2 years.

In 1414, Sigismund, King of Hungary and now Holy Roman Emperor himself, endorsed convening the Council of Constance, to put an end to the Papal schism once and for all. King Wenceslaus had grown increasingly exasperated with Hus' intransigence, as he engaged in open air preaching and theological writing. In the interest of helping dissipate dissension, Hus accepted a summons and safe conduct to the Council given by Sigismund, probably encouraged by Wenceslaus.

Upon his arrival in Constance in October 2014,. Hus saw the announcement of his trial as a heretic. The curia held that the safe conduct promised to him by Sigismund, a temporal ruler, had no force i n a Papal court, and that promises or pledges of honor given top heretics were null and void. Hus was imprisoned for seven months, during which witnesses were heard, and he was accused of many heresies that he had not endorsed, including Communion Both Kinds. He was not allowed an advocate for his defense, and was found guilty of 39 counts of heresy. Hus continued to protest his innocence to the last, and was burned at the stake in 1415, a fate which he suffered with great dignity. Thus, the stage was set for the outbreak of the Hussite Wars.*

* this background material was condensed and modified from Warrior of God: Jan Ziszka and the Hussite Revolution, Victor Verney. Frontline Books, London, 2009. I will have occasion to refer to this excellent book again as this series continues. 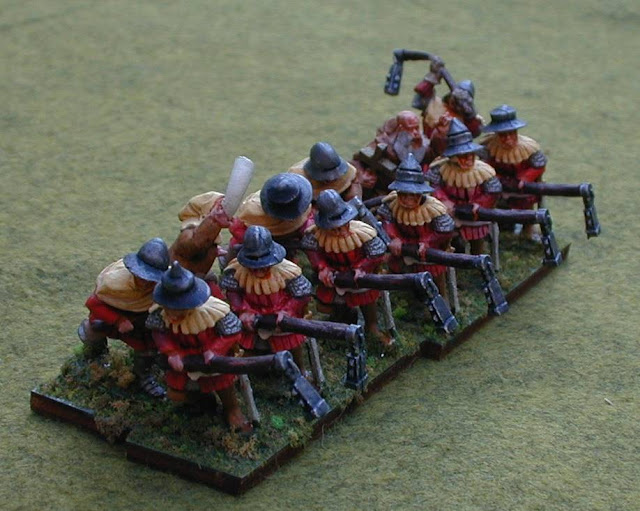 The Hussite Rebellion encompassed all facets of Bohemian society,. but its greatest support always came from the peasantry. 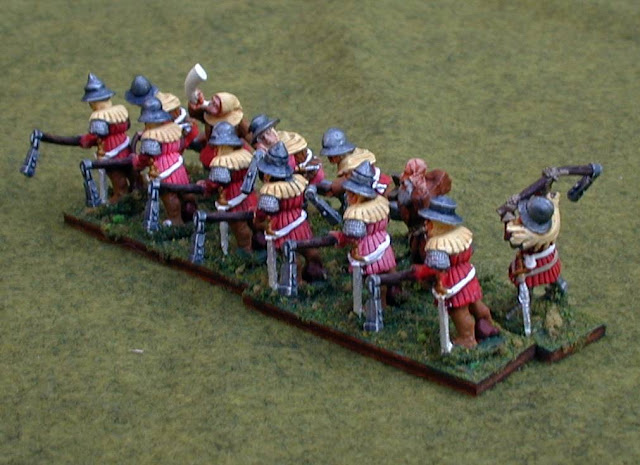 The military Flail was an adaptation of the threshing tool that peasants were well accustomed to using. 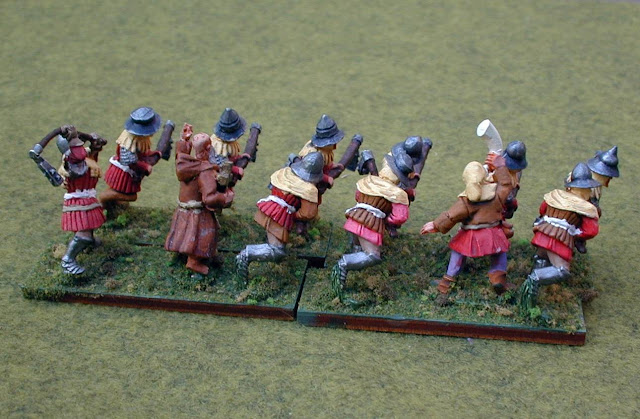 These are 28mm figures by Old Glory from their Hussite Wars ("Vlad the Impaler" heading) range, I have used figures from their Medieval "Revolting Peasants" range, specifically the "Leaders, Agitators, and Mad Monks" set for Command figures for these units. 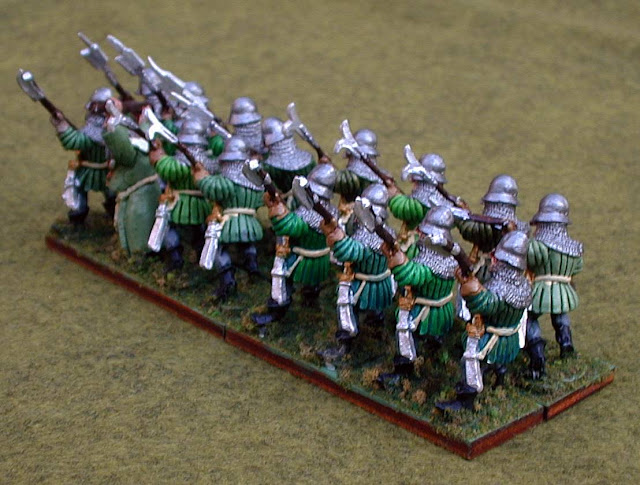 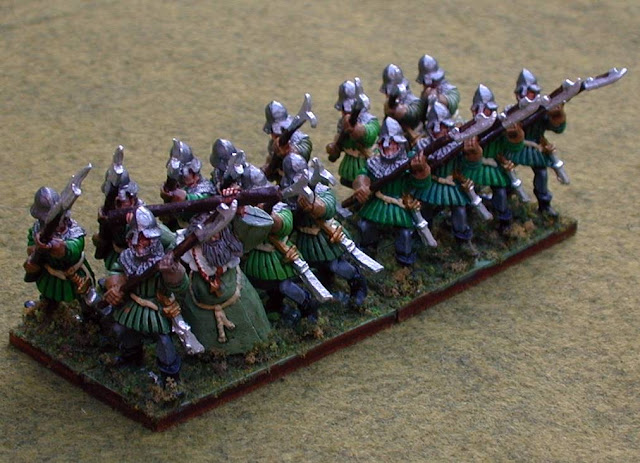 Note the use of the "Mad Monk" with Quarterstaff. Clergy were integral to the Hussite cause and army. 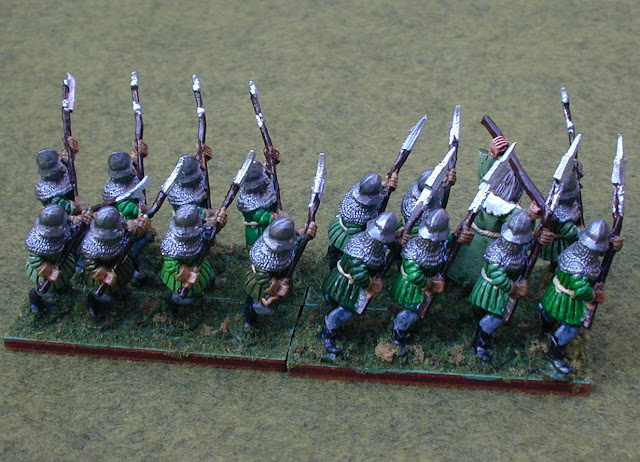 The "can opener" resemblance of their weapons is fitting considered the well armored "Crusader" forces they fought against. 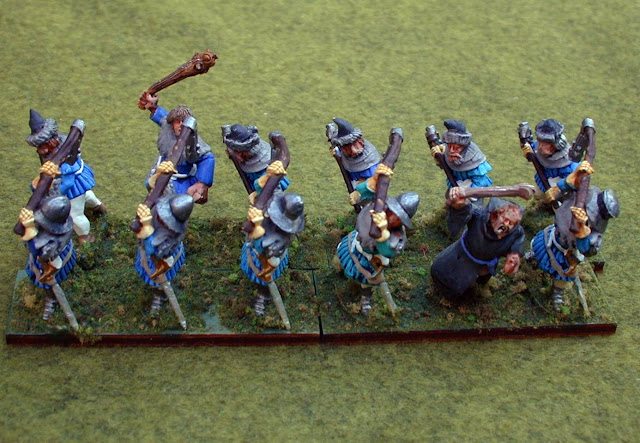 Another unit of Hussite Flailmen. The Flail took considerable strength to wiled effectively, but these men had spent a lifetime at hard work. Note the monk in the front rank once again. 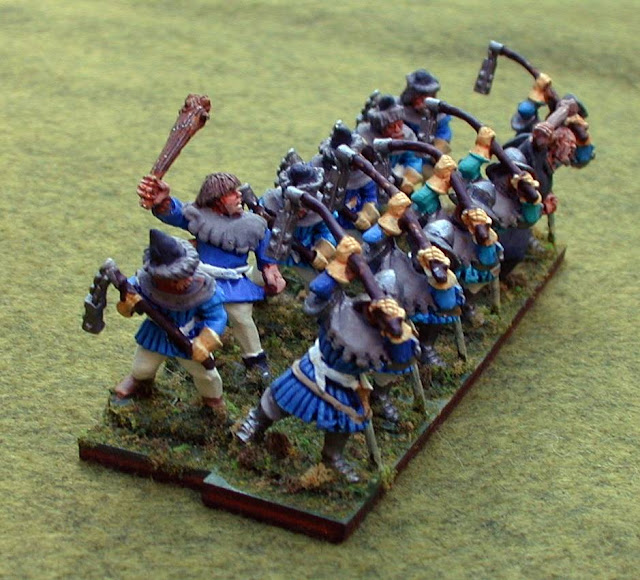 The big guy with the club in the back rank reminds me of the epitome of a High School bully! 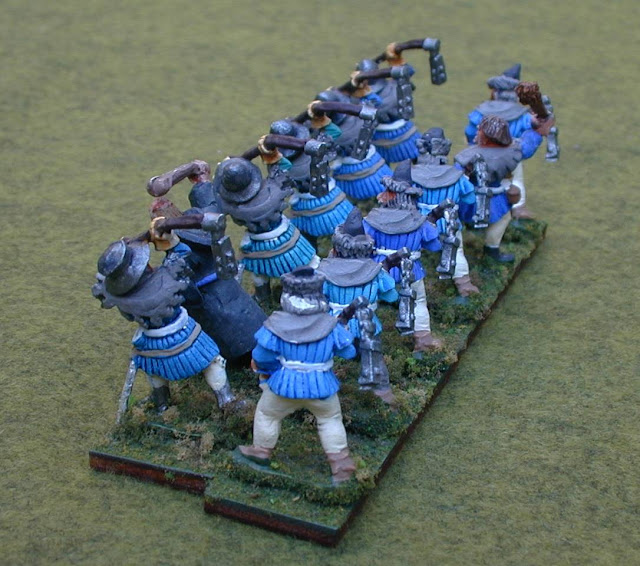 Striking from a height (we will come to the famous Hussite War Wagons later) gave these guys an added advantage in combat. 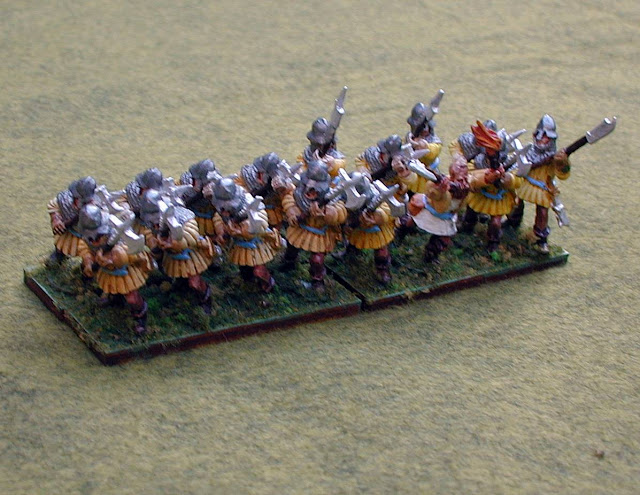 I love the guy with the flaming torch and the hatchet in the front rank of this unit! 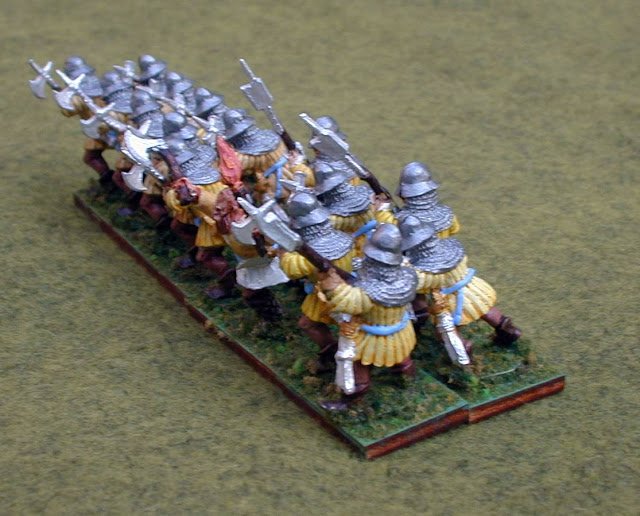 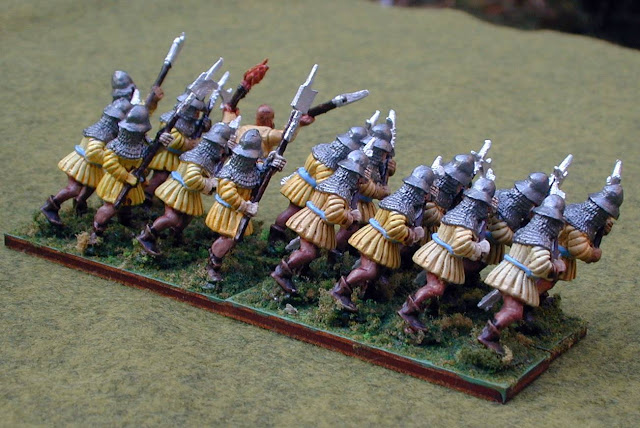 They are better equipped than their rural brethren! 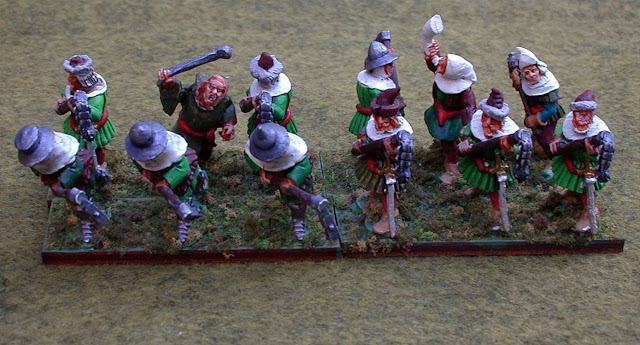 The hornist is also from the "Revolting Peasants" set. 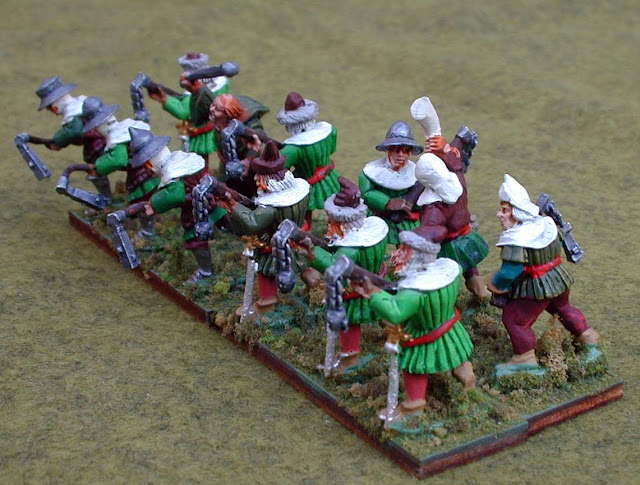 Many of these Flail men have more Easter European looking fur caps. 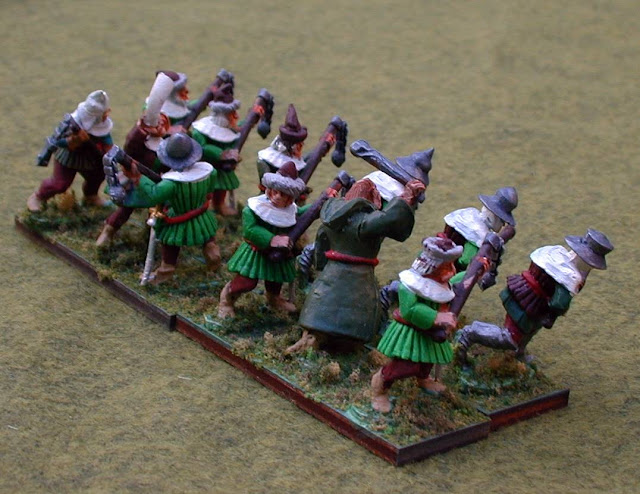 And another monk/priest in the second rank.