While Jan Ziska was campaigning against Ulrich of Rozemberk, the armed forces at Prague were commanded by Hynek Krusina, former military commander of the Orebite faction of the Hussites. He besieged the Vysehrad castle at Prague from September 14290 on, his roughly 12.00 men being camped Southeast of the castle, cutting of its communications and food supply. W hen an attempt to resupply the castle by river was thwarted by the Hussites, Sigismund felt compelled to act. He brought a force of some 16,00 men and attempted to draw off the besieging Hussites by raids and attacks on smaller outlying towns, but was unsuccessful. The garrison had become desperate by the end of October, and negotiated an agreement whereby they would surrender if no relief appeared by November 1st.  Sigismund, who was awaiting some 2,000 additional troops from Moravia,dithered and the appointed day arrived, and the commander of the castle kept his word, and the garrison surrendered the castle to the Hussites. They were allowed to keep their hand weapons but no heavy armaments. Upon learning of the surrender, Sigismund, who by his inaction was in fact responsible for the fall of the castle, became enraged. He was convinced there was a conspiracy against him by his Czech and Moravian nobles, which was aggravated by the fact that the garrison commander was also Moravian.  When the Moravians arrive following the fall of the castle. their leader, Henry, advised Sigismund that an assault on the cast;e would be bloody and doomed to failure. In response, the Holy Roman Emperor ordered a frontal attack on the castle,and specifically assigned his Moravian and Bohemian (Czech) soldiers to charge directly at the Hussite guns, while giving his German and Hungarian soldiers much less hazardous positions.

The assault was, predictably, a bloody failure, and Henry himself and over 500 of his men were killed, and many more captured. As a result of this spiteful conduct, most of the remaining Moravian Royalist soldiers defected to the Hussite cause, and the Praguers began dismantling the great Vysehrad castle. Characteristically, Sigismund singled out his Bohemian nobles and their retainers for the blame which belonged properly to himself. 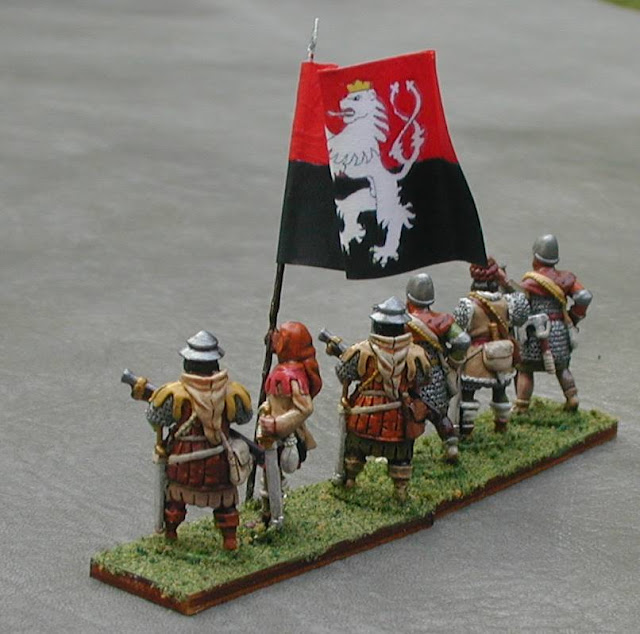 Hussite Handgunners by Kingmaker, now sold by 1st Corps, Ltd
Their standard bears the White Lion of the Kingdom of Bohemia.


On November 5, 1420, the Hussite leadership sent out a message to all of Bohemia, accusing Sigismund of shaming the Czech nation with undeserved charges of Heresy, and attempting to replace native Czechs with Germans and Hungarians, and instigating a civil war between the Bohemian Hussites and Catholics for the express purpose of weakening the Czech nation., and hastening its extermination. A remark attributed to Sigismund, to the effect that he would happily give away Hungary if he could only kill every Czech  was particularly convincing, and stirred nationalist sentiment even among the conservative Catholic nobles. Many new nobles joined the Hussite cause as a result, and those that remained wavered even more in their support of Sigismund. Among these later was none other than our old "friend", Ulrich of Rozmberk, one of the most two faced men who ever lived! 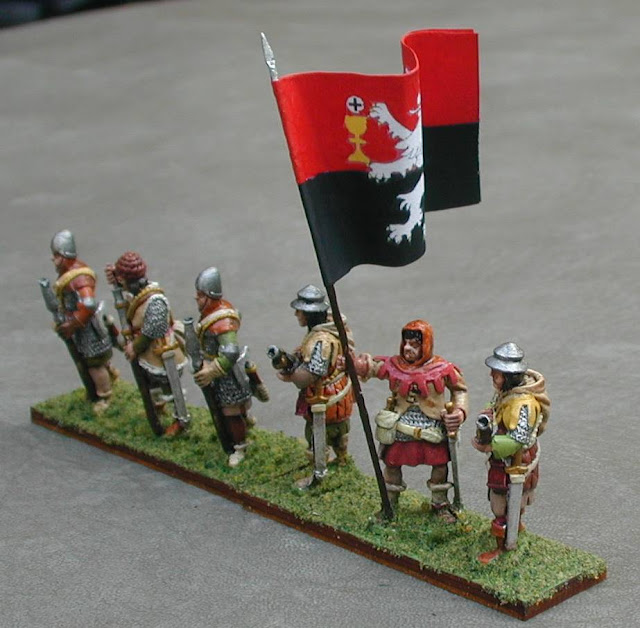 Being a Hussite banner, though, this one incorporates both the Chalice and the Host as well!


In  November 1420, Jan Ziska and his men moved against yet another of Ulrich's towns, that of Prachatice. Ziska had conquered this town twice already, and each time the town agreed to accept allegiance to Tabor and the Four Articles of Prague. Each time they had reneged on their promises when the danger was past, expelling most Hussites and burning a few at the stake for good measure. Despite the town's repeated bad faith, Ziska again promised to spare the lives and possessions of all in the town if they would allow hist Taborite forces to enter, the townsmen already being deployed defensively along its walls. They replied with a sarcastic and offensive rejoinder. Understandably Ziska's patience was at an end, and he ordered an attack, stating that none of the inhabitants would be spared afterwards. The town fell after a brief fight, with 135 defenders being killed in the attack. After freeing a handful of Hussites, in keeping with the savagery of this conflict, the remaining 92 townsmen were burned to death. The women and children were spared but told to leave immediately, and the town was resettled by Hussite peasants. 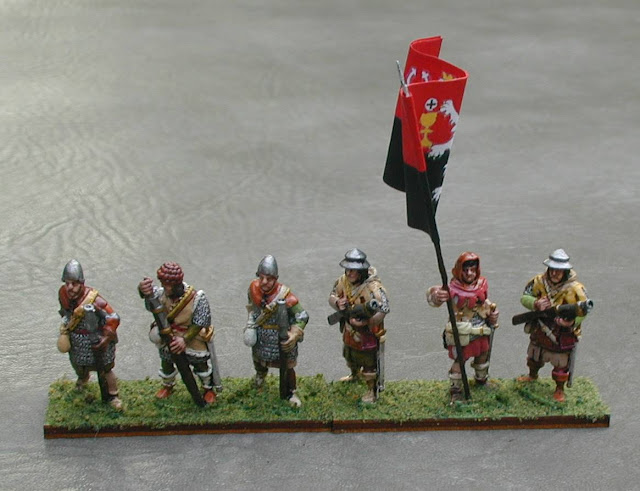 The detail on these Kingmaker figures is superb!


Following further reverses, Ulrich sought an armistice with the Hussites. By its terms, which would expire in February 1421, the Hussites were granted free [passage through Ulric's domains, and Ulric agreed to accept the Four Articles of Prague, thus granting freedom of Hussite worship much of the rest of Bohemia. Thus by the end of 1420, the Hussite cause had achieved great success in both securing Prague against further attack, and expanding their religious influence. Unfortunately, as the year drew to a close, infighting between the Hussite factions once again intensified. 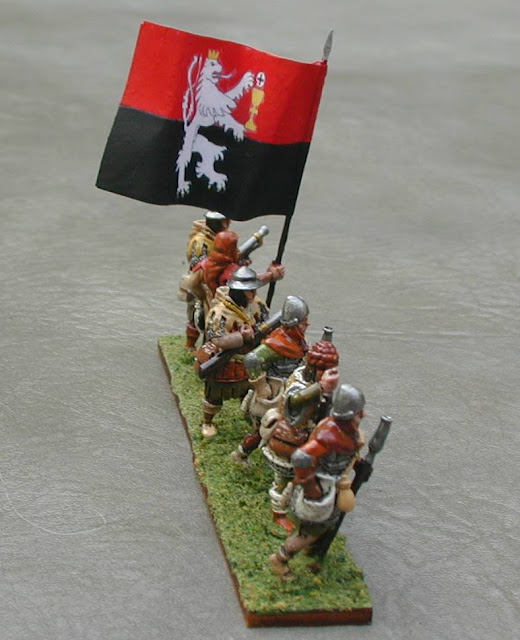 Some basic shading followed by an application of my darkest version of the Magic Wash" really brought out the detail in these sculpts. 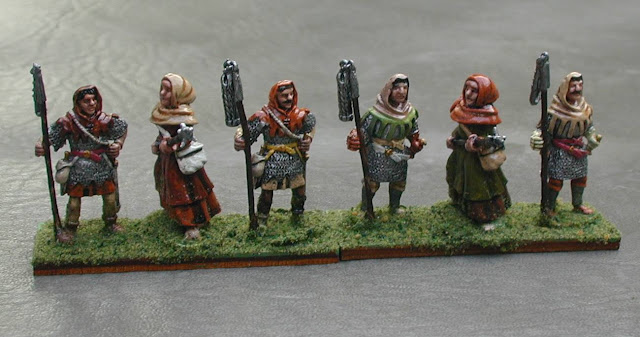 Hussites armed with Polearms, by Kingmaker. 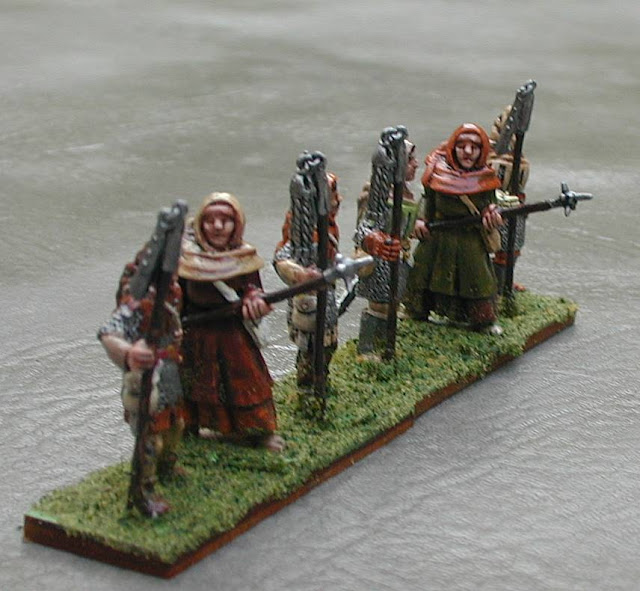 Women were definitely known to have fought alongside their men in support of the Hussite cause.  Thus some Kingnaker women are included on these bases! 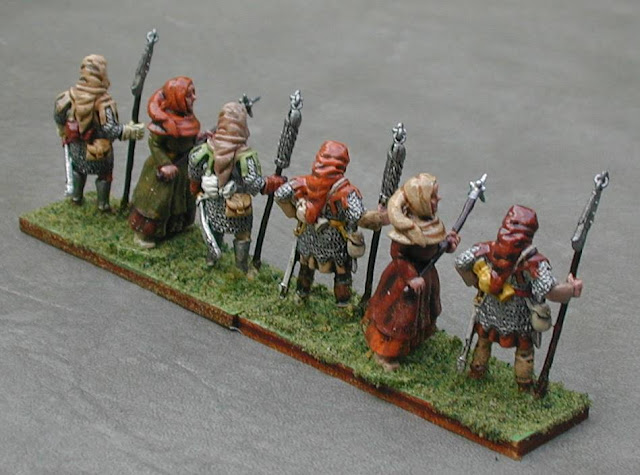 The figures come with an assortment of different polearms. 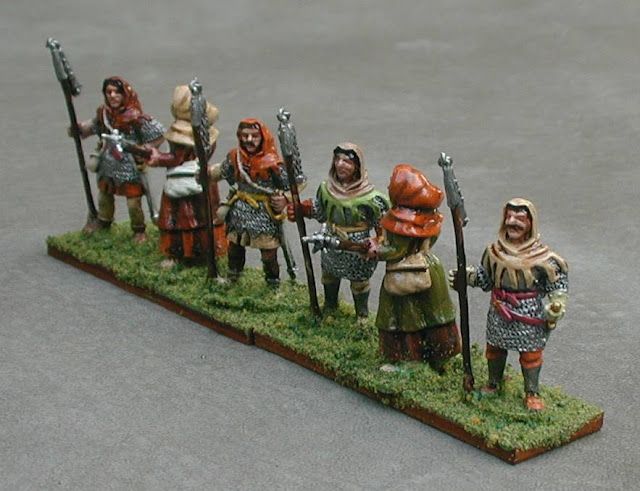 Still, the war Flail is the most characteristically Hussite polearm. 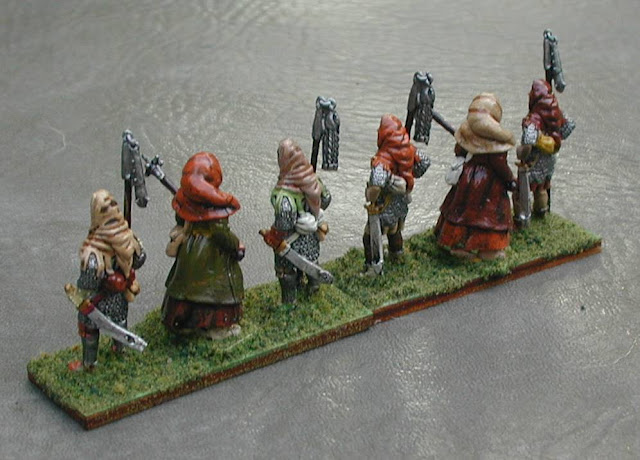 The elongated "tails" of the hoods remind me somewhat of the lekku or "brain tails" of the Twi'leks of the Star Wars universe (see this article in Wookiepedia).

The following is taken from the "History Reconsidered" site's article on the Hussites:

Utraquists
The name is based on the practise of taking communion “under both kinds”, or “sub utraque specie.” This was the moderate element of the Hussites, comprised mostly of the merchant class and minor nobility in the urban areas, especially Prague. They benefited greatly from the confiscation of property from the Catholic churches. This faction attempted to negotiate with Emperor Sigismund in 1419-1420 with no success. 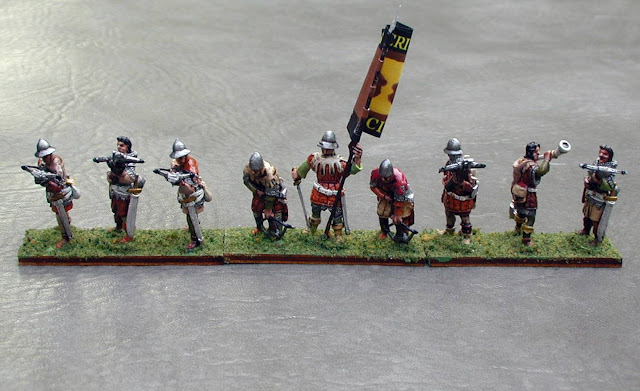 
Taborites
The Taborites represented the most radical sect in Hussitism, believing in equality under the law for noble and commoner, the equal distribution of wealth, communal ownership of property and decision making by elected council rather than noble fiat. To the Taborites, clergy were unnecessary, biblical interpretation was an individual matter, their communion services were held on hilltops and their children were baptized in rivers and ponds. They established themselves in the fortress town of Tabor. Once again, great detail on these figures. I do have to say, though, that these Crossbows were a real pain to attach. The nature of the join was such that all attempts with super glue failed, as did going to just epoxy. I finally had to use the fast drying Duco cement to hold them in place and then slather on epoxy later for a more lasting bond. Quit annoying, actually!


Orebites
Established by Ziska in 1423 under the name “Oreb Union” named after a hill near the town Orebovice. He had become dissatisfied with the indiscipline of the Taborites and introduced a strict military discipline among this group he took with him out of the Taborite faction. He enforced a strict system of justice under which all were seen as equal under the law, all loot was equally distributed and hoarders were executed. Upon the death of Ziska, they took the name of “Orphans” and carried a banner with the image of Ziska on a white horse. [Peter: Actually, this somewhat more mopderate faction dated to 1420, and was later joined by Ziska when he left the Taborites, and took its name from Mount Oreb] 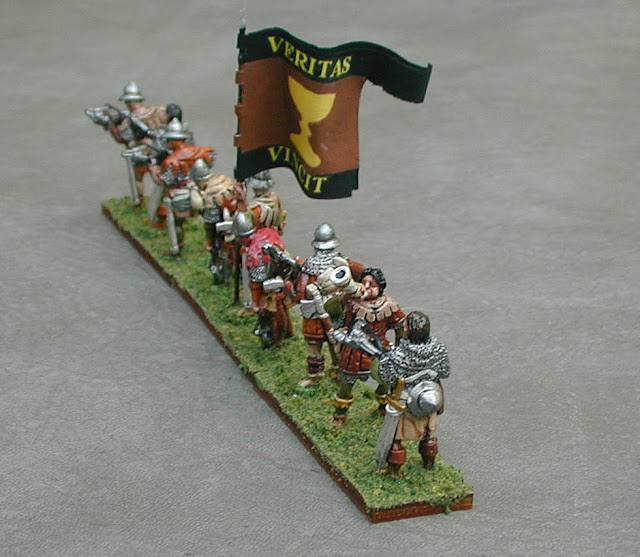 "Veritas Vincit", or "The Truth will Prevail", is accompanied by the Chalice emblem of the Hussite cause on this banner.

Adamites
A small short lived minor sect of Hussites that believed that all should live as Adam and Eve did.  Their belief in the need to go naked doubtless contributed to their suppression by Ziska in 1421. [The survivors fled into the woods, and became quite debased, recognizing no authority, and holding every human urge as divine. They forbade marriage, with all men sharing all women, and supported themselves chiefly by looting and pillage.] 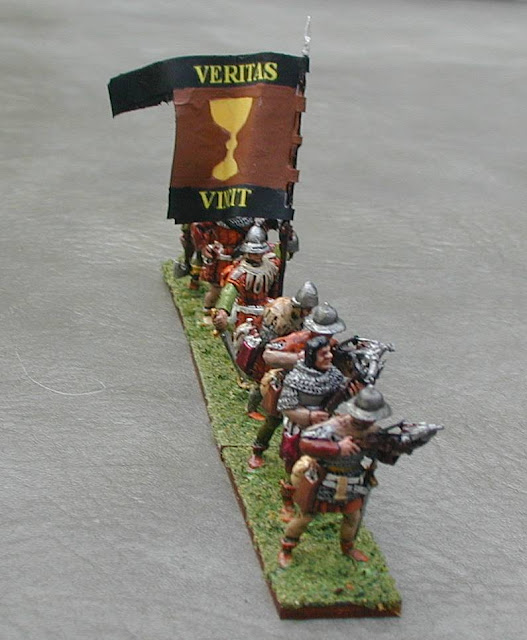 Well, no one would accuse these fellows of exposing much flesh, would they?
All three of these groupings now form part of my "Brown" Hussite contingent.
Posted by Gonsalvo at 12:24 PM