As regular readers of this blog might recall, a little less than a year ago I acquired almost 300 Macedonians and Thracians from fellow HAHGS member, Edgar. The first of these have pushed their way of the painting table at last. They have been almost ready for about 2 weeks now, but distractions associated with teaching a medical student in the office and boosting the Wizard Kraft Kickstarter delayed their completion. That was compounded by trying 2 new items in my modeling repertoire. 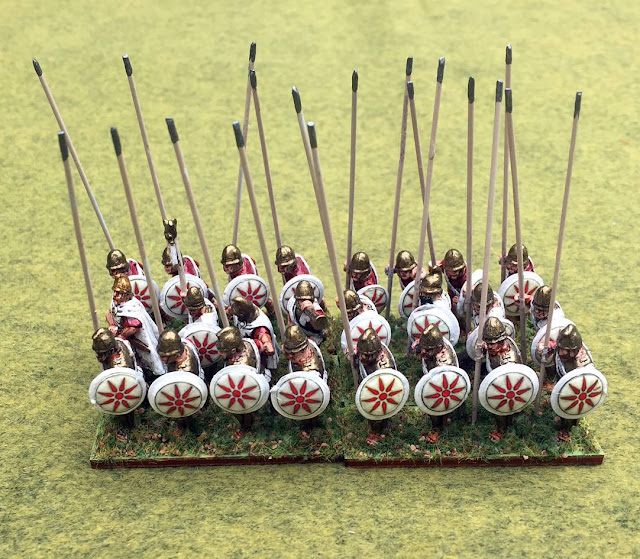 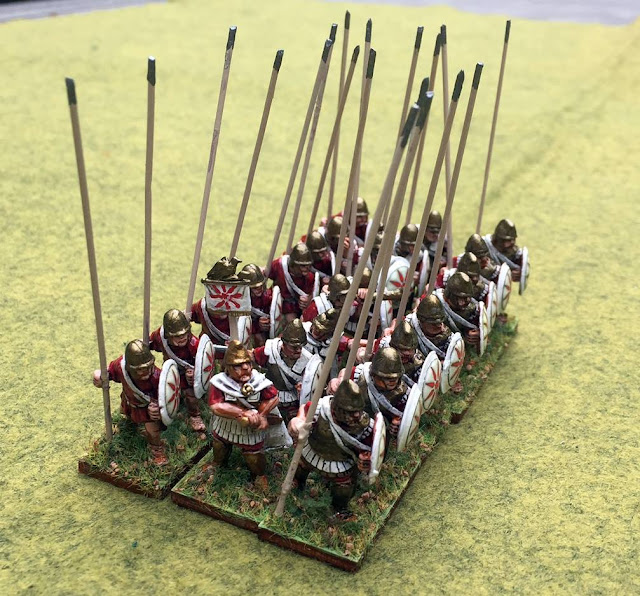 Very nice sculpts as you can see! Edgar had generously supplied me with a big supply of  Little Big Men studios shield transfers. I approached the prospect of using them with considerable trepidation. This proved to be well founded. My first mistake was assuming that these were decals. Sop I cut them out, soaked them in water briefly, slid off the paper, and applied them. They utterly refused to stick, or conform to the curve of the shields.  Read about applying decals, watched U-tube videos, and thus and it was off to the hobby shop for some Microset and Microsol solutions for decals. Dutifully applied according to the instructions and... nothing - no adhesion, so shrinkage into place. Grrrr!!! 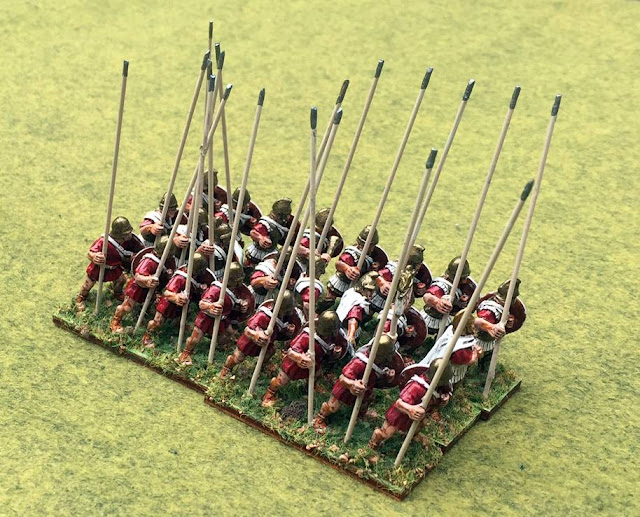 At this point, I of course recalled the first antidote to Murphy's Law - "When in doubt, read the directions!" Unfortunately, the transfers came without any. BY now, I had included these simply were not decals, and that was why my approach was failing so spectacularly. A Google search turned up the LBM website, and with some hunting around on the website, a pdf instruction sheet was found. Unfortunately, the instructions were about as clear as mud. Worse , they made reference to two DIFFERENT styles of LBM transfers, and it turned out that Edgar had thoughtfully labeled the transfers in groups as "old" and new styles". 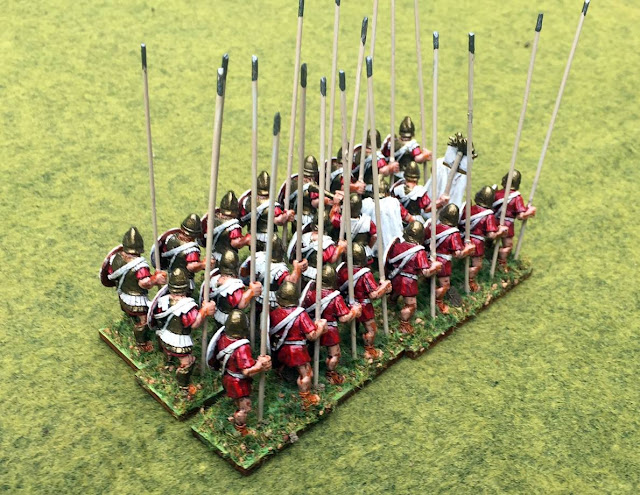 So it was back to consult once more with Sir Google. That disclosed some much clearer instructions, and especially a U-tube video of using the transfers. Aha!  Now at least I understood how they were supposed to work. Applying them still proved to be tedious, especially removing the clear plastic fronts/backs on both styles. 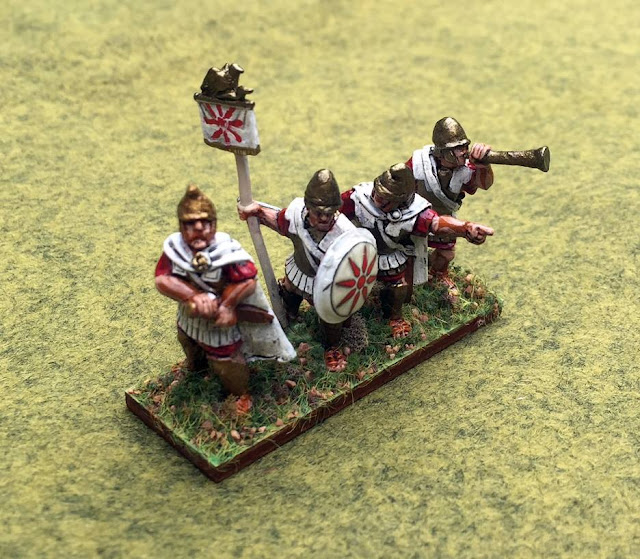 Once figured out, I have to say that they look great. My next unit will be much faster and less stressful. Meanwhile, I have all the stuff I need to work with decals, but no actual decals, LOL! 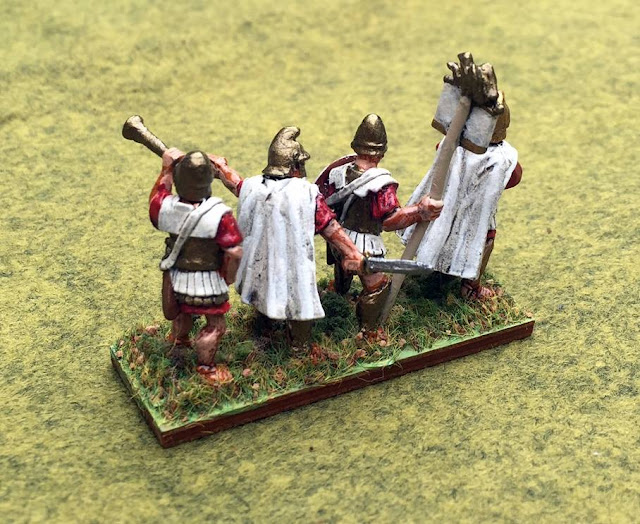 The dark "Magic Wash" worked especially well on these figures, just needing some touch up of the off white ("Craftsmart Bisque) areas of the capes and vexillum standard. 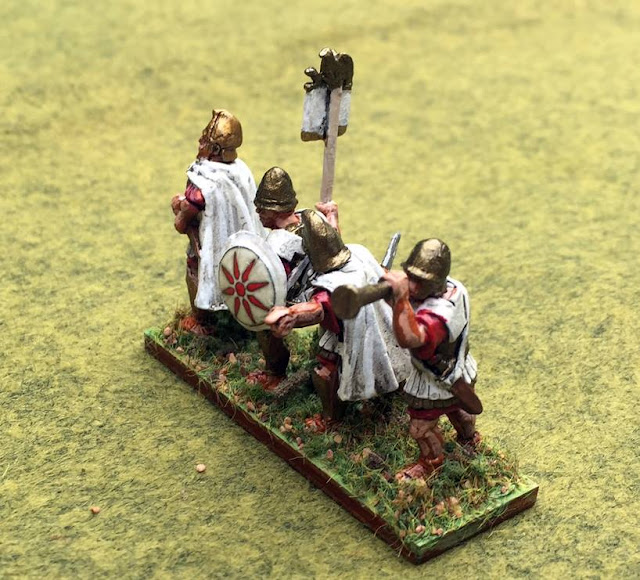 I later painted the center of the "bell" of he trumpet black. The other thing I used for the first time was Walther's "Goop" for attaching the shields, and the many super glued pikes that had already popped off during the painting process. I found the instructions somewhat intimidating, but in many ways the stuff is rather similar to my old standby, Duco Cement, although the big tube was harder to control than the small Duco tubes are. Hopefully the bond will be stronger. 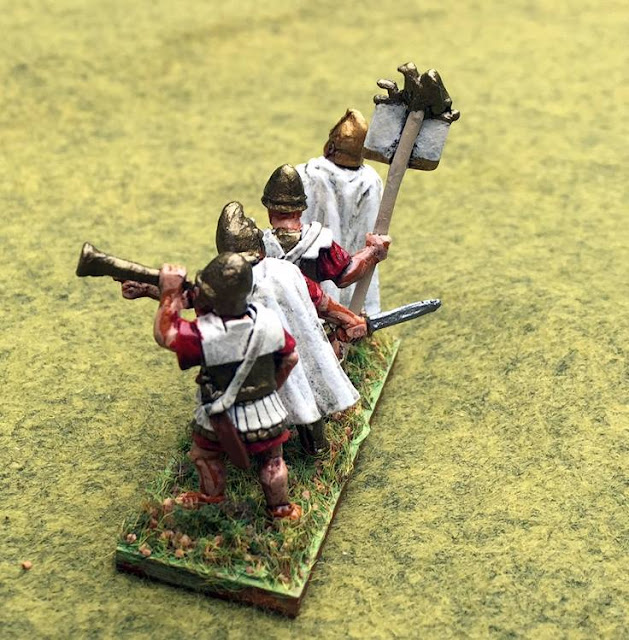 One Phalanx painted, 5 more to go! In glue as in Simon Miller's Ancient rules, victory goes To the Strongest!
Posted by Gonsalvo at 9:11 AM