Dragoons were originally a sort of mounted infantry, but gradually evolved into "medium" cavalry, their role being somewhat intermediate between the light cavalry and the armored Cuirassiers. In the French army, they were expected to maintain their capacity to act dismounted as infantry. Shortage of mounts meant that some dragoons served semi-permanently on foot in 1805 and 1806, although reverting to the mounted role once sufficient captured horseflesh became available. When serving dismounted, the trumpeters exchanged their instruments for drums. Out of respect for this traditional dismounted role, the Elite company of each Dragoon regiment included 8 sappers and a sapper corporal, complete with the traditional crossed axes badge on their sleeves, as well as the wearing of full beards. No other French Cavalry included sappers among their ranks. This peculiarity aside, the organization of the Dragoon regiments was essentially the same as that of the Chasseurs a Cheval, as discussed earlier, namely 4 squadrons, each of two companies.

The Royal army had only 18 regiments of Dragoons as of the start of the Revolutionary Wars, increasing to 21 by 1792. Napoleon, as First Consul, increased the total to 30 regiments of Dragoons in 1803. The Dragoons wore medium green coats. Regimental facing colors under the Empire were as listed in the table that follows; as with the chassuers, colored collars cuffs, and cuffs flaps were piped in green, and green collars, etc were piped in the regimental color.

* Note that the 1st, 3rd, 8th, 9th, 10th, and 29th Dragoons were converted into Chevau-Leger Lanciers in July, 1811.
Pants were in varying shades of tan, off white, and or grey. Belts were white. For headgear, the Dragoons wore a brass helmet with a black horsehair "tail" and brown fur turban. In full dress, plumes of a bewildering variety of colors, including white, red, and green with a regimental colored tops, among others, might be worn. 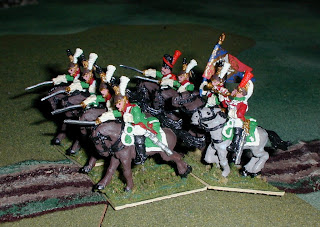 The first regiment up for review is the 9e regiment, with its crimson facings. All my dragoons are Wargames Foundry figures, and quite hefty they are, too! I particularly like this pose, charging with their straight swords thrust forwards. 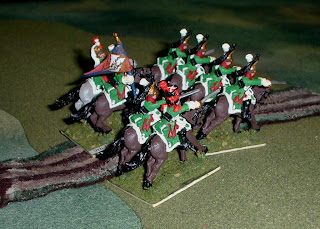 The bearskin and red epaulets mark the soldier of the elite company. 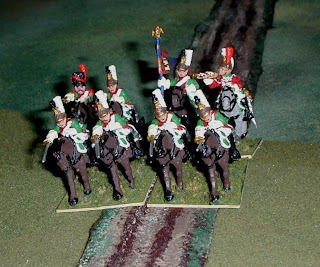 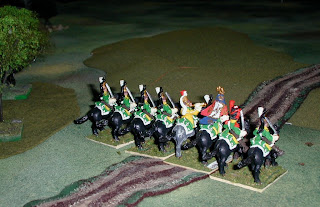 These fellows are the 19e regiment of Dragoons, looking spiffy in their yellow facings. Once again the Trumpeter is dressed in reversed colors, with white horsehair "tail" on his helmet, and rides a grey horse. 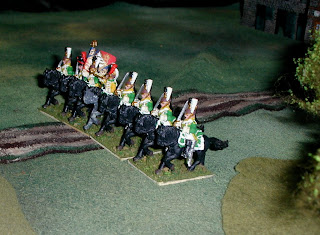 This regiment, like the 9e, has white plumes on its helmets... except the trumpeter and Elite company are wearing red ones! 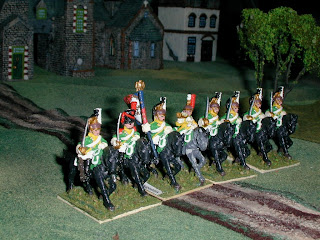 The swallow tailed standard is indeed the correct version for Dragoon regiments. 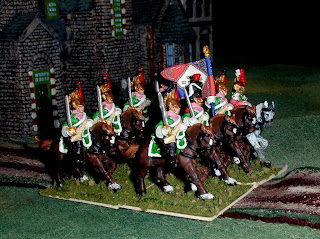 Next up is the 15e Dragoons, with their rose pink facings. Note the bearskin of this regiment's elite company has white cords instead of red ones; both variants are known to have been used. 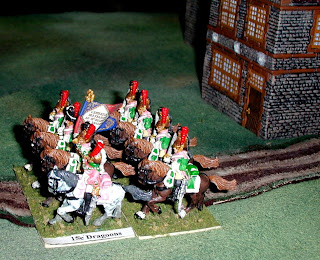 The trumpeter rides a white horse, in reversed colors once again, has a Rose pink jacket faced green. In the context of the regiment, I think this looks just fine, even handsome. Recent discussion on TMP included some commentary about pink jackets looking "gay", an association that certainly did not exist during the Napoleonic wars. Overall, I think we're pretty much past that sort of idea now days anyway! 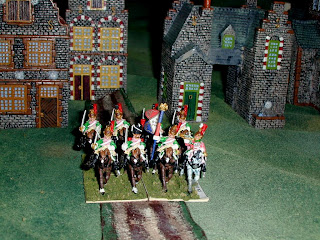 A final view of the 15e regiment of Dragoons; they have all adopted red plumes for full dress. From 1808 on, the Dragoons formed the bulk of the French cavalry in Spain. After the enormous losses of troopers and horses in the 1812 campaign in Russia, the Dragoons were the best remaining branch of the French cavalry, and many regiments were recalled from Spain for service in central Europe with the Grand Armee. 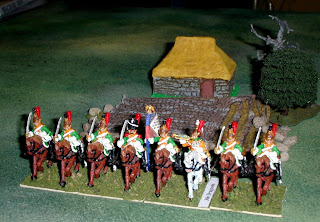 Our last unit of Dragoons is the 30e, with aurore facings, and red plumes on their helmets. 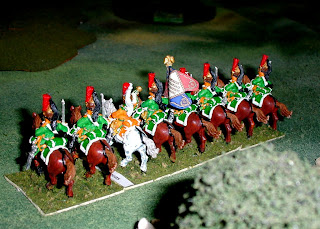 Once again the trumpeter rides a white horse and is resplendent in his reversed colors - aurore jacket faced medium green, and white horsehair on his helmet. 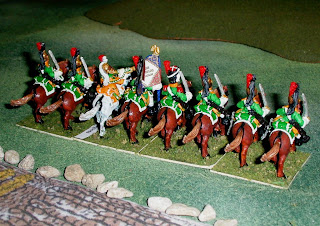 Parting shot of the 30e Dragoons; note the trumpet cords of mixed green and white; they might also be aurore and white, or even green and aurore.
I hope you enjoyed this tour of the Cavalry branch with a case of identity confusion; were they still mounted infantry, or were they light cavalry, whose primary mission was scouting and screening, or were they a type of battlefield cavalry in their own right?  Some, none, or all at various times and places, it would seem!
Peter
Posted by Gonsalvo at 9:28 PM