"One must break a good many eggs to make a good omelet!" - Emperor Napoleon
The third of our six Hofkreigsrat 1809 battles planned for the 200th anniversay celebration at Historicon was Eggmuhl (or Eckmuhl, depending upon the language/reference). I'd done this battle strictly historically many years ago, and if played as it actually happens, true to history it's pretty  much a French walkover, as the whitecoats of Rosenberg's IV Koprps are hopelessly outnumbered and outmaneuvered as well. Fine as an instructive history lesson, pretty lousy as a wargame that gives both sides a reasonable chance of success. I'd used some of Keith McNelly's 1809 scenarios for V&B as a take off point, but his hypothetical Eggmuhl scenario just didn't make any sense to me at all, so we needed to come up with something a bit more original for this one. In concept, that didn't prove that difficult; there was another Austrian Korps only a few kilometers away that could easily have aided Rosenberg in his combat with Davout and then later the bulk of Napoleon's army - that of FML Hohenzollern-Hechingen's III Korps. This then, would be the premise - that two Austrian Korps a few miles apart actually managed to support one another whilst Rosenberg attempts to extricate himself from the closing jaws of Napoleon's trap. In the event, it took three playtests of the scenario to get the details right - including one at the Host as part of the "open gaming" the Wednesday night before the official opening of the Convention!
The first set of photos is from the second playtest. Roger Downie (who has the entire Bavarian army in 28mm scale as part of his collection!) was the lead 'Rat for Eggmuhl. This action was fought in Joe Fish's infamous "Basement of Doom". Incidentally, of the many references we consulted in designing this scenario, we found James Arnold's Crisis on the Danube to be by far the most helpful. 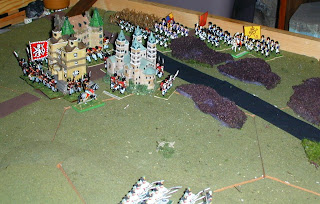 The Wurttemburgers prepare to assault the village of Eggmuhl across the Gross Laber river. 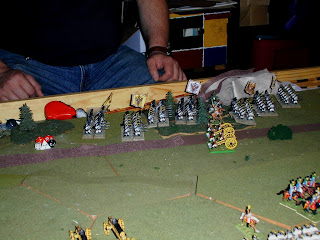 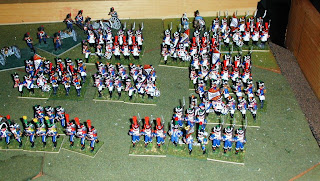 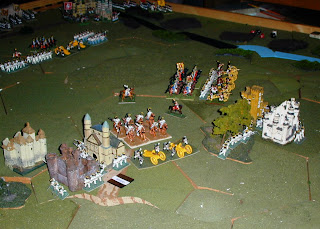 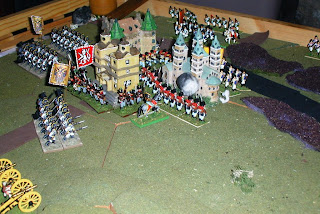 A fierce battle ensues for possession of Eggmuhl and its bridge, drawing in Austrian reinforcements from Hohenzollern. 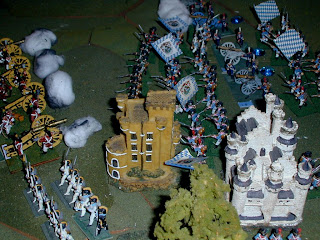 Austrian batteries on the Betelberg issue fire, but fail to prevent the Bavarians from seizing control of Unter-Laichling! 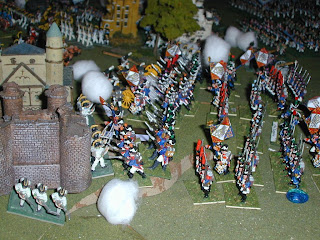 St Hilaire's Division assaults Ober-Laichling; before long, it will be cleared of Kaiserlicks as well! 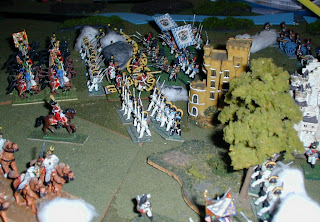 Bavarian infantry attacks the Austrian gun line; despite heavy losses to canister fire, they will ultimately prevail here as well. 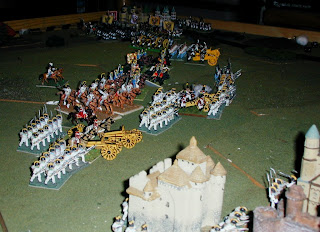 Rosenberg's IV Korps commences its disengagement from Davout and Lefebvre... 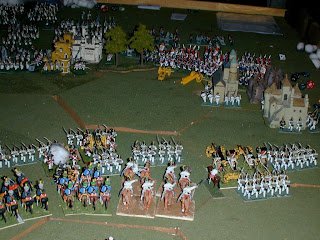 And none to soon!  Although now supported by additional troops from Hohenzollern, the French are present in overwhelming numbers, and about to flood across the Gross Laber river. 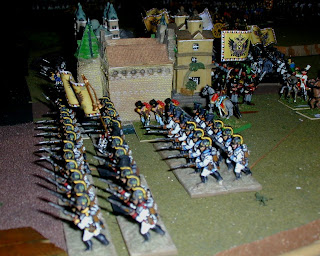 Some of Thomas' gorgeous Front Rank Austrians "see the elephant" for the first time in the see-saw fighting around Eggmuhl. 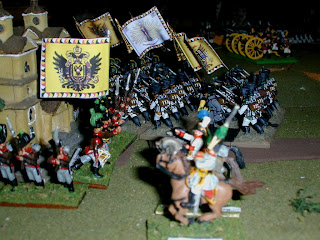 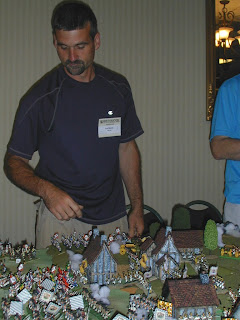 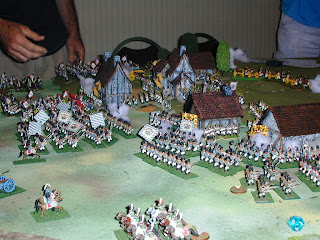 The bitter struggle for Unter- and Ober-Laichling and the associated "hanging woods". Note the line of Austrian guns in the distance, firing from their position on the Betel Berg. 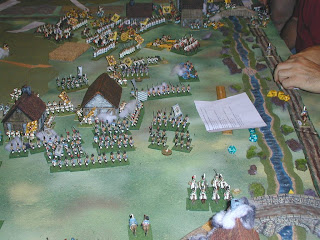 Hohenzollern's supporting Korps arrives. Each of the French officer figures along the road on the far side of the Gross Laber river indicates the lead point of a Division of French/Allied troops. Thus far, they have just continued marching to the East... 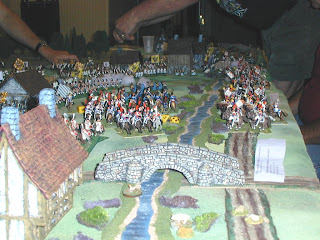 But not any longer!  French heavy cavalry have poured across the bridge at Schierling, while the rest of the new French arrivals start the slow process of crossing the Laber and its associated water meadows. 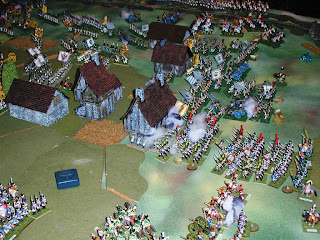 Situation at Ober- and Unter-Laichling as the French hammer falls... it is high time for Rosenberg to disengage if his men are ever to see Regensburg and cross the Danube to safety!  Fortunately for the whitecoats, Hohenzollern's reinforcements are also making their presence felt on the battlefield! 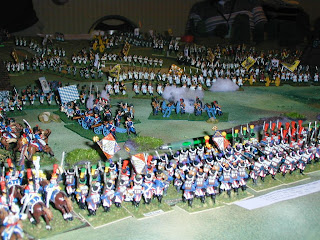 Overview of the battlefield from the French vantage point on the far side of the Gross Laber... 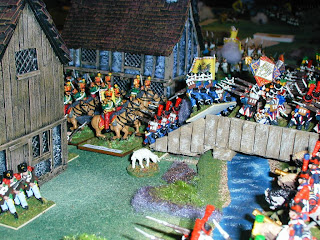 Unlike history, the initial assault on Eggmuhl itself by the Wurttemburg troops failed miserably, leaving it up to the new French reinforcements under GD Morand to seize the village and its all important bridge!  The great buildings seen in these photos are from Thomas' collection, by the way.

The game ultimately ended with the Austrians having been roughly handled, but conducting an effective and controlled withdrawal in strength, and thus fulfilling their Victory conditions. At about the point illustrated by the above photos, we had a brief but most pleasant interruption as we were told that the game had won the PELA ("Pour  Encourager Les Autres") award for the best Theme (1809) game of its time slot (Friday AM). 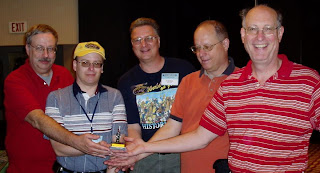 The Hofkreigsrat team - from left to right:  Roger Downie (lead GM for Eggmuhl), 'Czar Barry' Frandsen, Thomas Kinstler, Joe Fish, and Peter Anderson. I know, we should stick to pictures of miniatures, right?  Perhaps that explains the absence of the final 'Rat, Dan Beattie!  Oh well, "One for All, and All for One!" 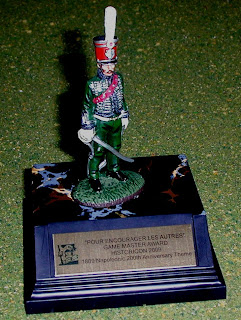 Speaking of sticking to pictures of Miniatures, the trophies for Historicon 2009, the 25th or "Silver" anniversary of the Convention, were very nice indeed, as can be seen above.

Only after the convention was over did we learn that our version of Eggmuhl had also been named as the best Theme game of the entire Historicon convention! The game looked great,, but we also had an exceptional group of players who played with expertise, gusto, camaraderie, and good humor, thus showcasing the best of our hobby, and I think that may have been what swayed the judges, considering the multitude of outstanding 1809 theme games run by a great many fantastic GM's at Historicon 2009. Still, thanks to HMGS from Roger, myself, and the rest of the Hofkreigsrat team!