As we've discussed before, if you're going to play Napoleonic Wargames, it's pretty hard to avoid having quite a few of these guys. I think the standard French Line infantry uniform is quite elegant, actually. It's also kind of a pain in the butt to paint, too, LOL!  I mean, lapels and turnbacks white piped red, collars and cuffs red piped white (except the Voltigeurs usually have yellow or buff collars piped in blue, red or even white), cuff flaps, pockets, and shoulder straps blue piped red - it can get to be a bit tedious at times, especially when you paint 72 at a time like I do!  Then throw in the different colored plumes and epaulets for the Greandiers and Voltigeurs, not to mention the officers and drummers - I can see why one might have at least some of these units done by a painting service, or even bought ready-painted. Not me, though! I'm a glutton for punishment, heh. Well, and also I enjoy doing some of the myriad minor variations of this uniform, many of which existed

Anyway, this set of four regiments forms Molitor's Division of Massena's Corps, which saw some of the bitterest fighting of the entire 1809 campaign, in and around the village of Aspern on May 21st. These guys have been very slowly working their way towards completion since I first started work on them in late November 2010, and literally just completed them yesterday. This is the 7th, and for now at least, last Division of my French Napoleonic army. 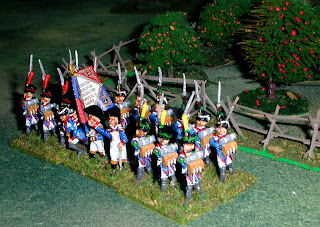 First up is the 2e Ligne. This regiment traces its lineage back to the Provence regiment of the old Royal army, formed rather late, in the year 1776. They are standing in front of an apple orchard...   one from which Calvados is made, perhaps?  That would be terrain worth fighting for! 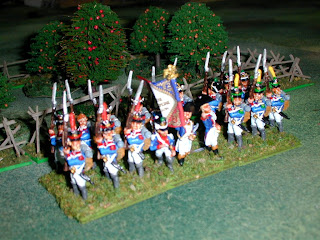 ﻿A somewhat blurry photo of the 2e. I like the officers in Bicorne, as appearing in this unit. Note also the red lapels on the drummer, a whim of the Regiment's colonel. 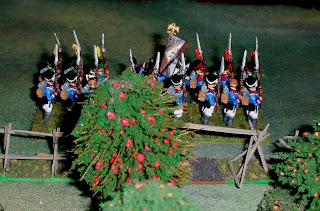 A final, rear view of the 2e Ligne. These are Old Glory figures, and the pose they are in is described as "receiving". It wasn't exactly what I was expecting, but I think it still works well. 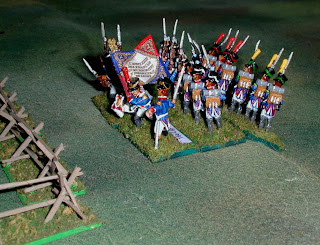 Next is the 16e Ligne. Its lineage stems from the Agenois Regiment of the Royal army, also first raised in 1776. The flags are by GMB; they come with 2 flags per regiment - the "2" is awfully prominent; I may have to paint it out, and either leave the wreath blank or try to paint in a 16! Note the tricolor rims on the drum, a less common variant than the usual solid dark blue. 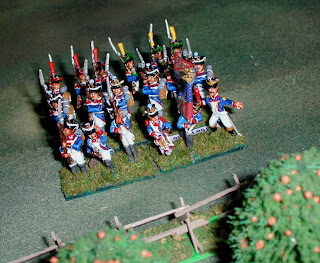 Frontal view of the 16e Ligne.  I like the dynamic pose of the officer, leading this attack column! 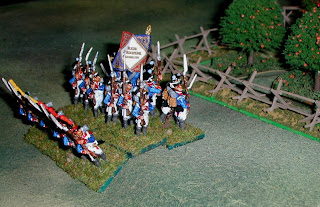 Evidently the 16e had to ascend a small slope to reach the apples. I'm sure the veterans would know how to make good use of them in their stew pots! 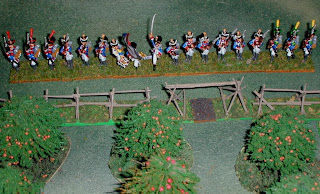 The third regiment of Molitor's Division is the 37e Ligne. Its ancestor was the Marechal de Turrenne regiment, formed in 1625. Here they are deployed in line, perhaps preparing to fire on some poachers? 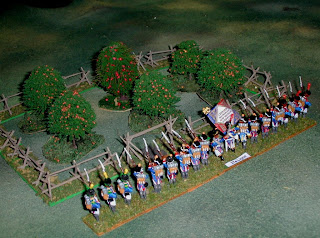 View of the 37e Ligne from behind, also showing the entire orchard. For these regiments, I did the Voltigeurs with yellow plumes with a green ball at the base, and green cords on the shako, one of many possible variants. 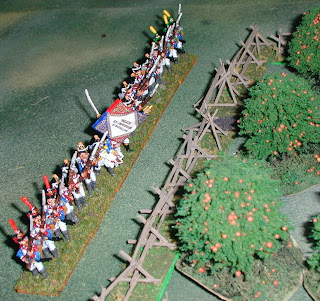 A final view of the 37e Ligne. The drummer has bright yellow lapels, collar, and cuffs, all piped in white. Once again, these kinds of nor regulation uniforms were common for drummers and other musicians, as well as sappers and especially the Drum Major of each regiment! The split rail fences were handmade from chopped up flat toothpicks, although more in the style commonly seen in the United States during the Civil War. 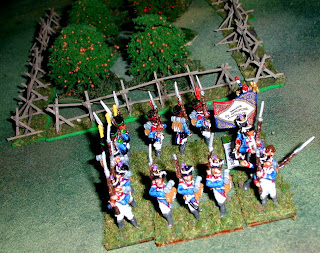 The final regiment of the Division is the 67e Ligne. The Languedoc regiment of the Royal army, raised in 1672 was the lineage that this regiment descended from. It is formed up in square, some enemy cavalry evidently having appeared nearby. 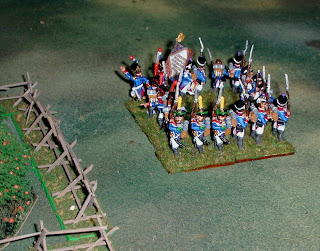 Very nice animation on these Old Glory figures, I think. If you look closely at the Voltigeurs, you can see that the collars of their uniform coats are buff in color, with dark blue piping, one of many possible variants. 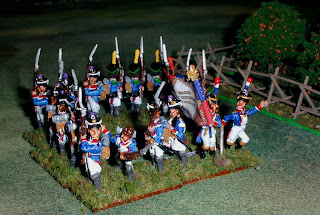 I decided that this Division, which fought so hard against the Austrians at Aspern despite being heavily outnumbered, would have a bit of residual Republican flavor to it - hence the drum rims are tricolor instead of the usual plain blue, and in this regiment, the officers even sport tricolor plumes, common during the Revolution, but quite rare by this point in the Empire. Doubtless a hotbed of Jacobins!

Well, that's it for today; it's been a while since I posted due to other demands; hopefully it won't be as long until the next one!