The French line Chevau-Leger Lanciers were created by an Imperial decree of July 15, 1811. The first six regiments were formed by converting the 1st, 3rd, 8th, 9th, 10th, and 29th Dragoons into lancers. Quite differently uniformed, the 7th and 8th Lancers were formed from the Poles of the two regiments of lancers that were part of the Vistula Legion, and the 9th from the 30th (some say 31st) Chasseurs, who were largely German. One suspects that the prospect of facing the Russian cossacks in the not too distant future may have been a factor in Napoleon's new found enthusiasm for the lance as a weapon.
The facing colors of the first six (French) regiments were:
1st Regiment    Scarlet
2nd Regiment   Aurore
3rd Regiment    Rose Pink
4th Regiment    Crimson
5th Regiment    Sky Blue
6th Regiment    Garrance (Madder Red)
These units wore dark green coats (habit-veste) with the facing colors appearing on the lapels, collars, pointed cuffs, turnbacks, and the piping on the shoulder straps and the pockets. The buttons were yellow metal (gold for officers). Sometimes the collar was piped in dark green. Belts were in white leather, except that the 6th regiment used ocher.
Dark green trousers (sometimes grey for field service) were worn, variably with  a single broad yellow (gold for officers, as usual) stripe down the outside (full dress), or a double or single strip in the facing color. On the front of the full dress pants was decoration in yellow (gold for officers);  spearheads for the 1st, 2nd, and 4th regiments, and Hungarian knots for the 5th and 6th regiments; the exact form used by the 3rd regiment is unknown. The men of the 6th regiment was known to have worn madder red trousers at times, and officers of other regiments were also known to wear non-regulation trousers in the facing color as well.
The helmet worn by the Lanciers, which I find particularly attractive, was essentially the Dragoon helmet with a rear peak added to it, and in place of the flowing horsehair of the Dragoons, a Grecian style black wool/horsehair crest. Plumes in white or red may or may not have been worn on the side of the helmet, their use becoming increasing rare over time. 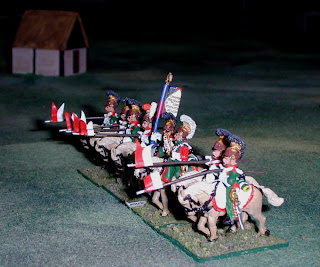 This is the 1st regiment of Chevau-Leger Lanciers, wearing their scarlet facings.
From the date  I recorded on the bottom of the Command stand, I painted these guys way back in November, 1998. At that time I was painting units like crazy to replace my recently retired vintage 1970's 1000+ figure Scruby French Napoleonic army. It kind of shows, as there is no shading on the horses at all, and as I was preparing to take these pictures, I realized I'd actually missed painting the dark green facings on the reversed colors jacket of the trumpeter! Horrors! So, I took an hour or so to do that and the mixed red and white cording on the trumpet, as well as dry brushing the helmet crests. The result was a considerable improvement in their appearance! 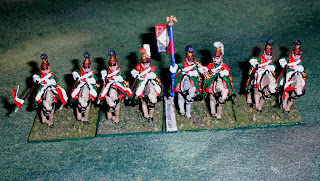 1er Chevau Leger Lanciers: note the white crest on the helmet of the Trumpeter
This distinction was usual for the trumpeters of the Chevau-Leger Lanciers; the trumpeters also had black sheepskins on their saddles, unlike the troopers who had white sheepskins; both had "wolves teeth" borders in the facing color. These are Wargames Foundry figures. 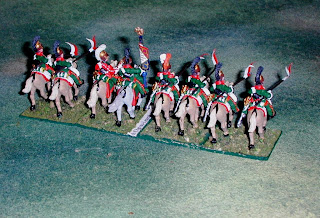 Rear view of the 1st Cheavu-Leger-Lanciers; note the red epaulets on the Elite company trooper's jacket.

They are carrying the pre 1811 model standard on their Eagle instead of the tricolor version, presumably a hold over from their Dragoon days... except that then it should be the swallow tailed version! The crest of the Elite company trooper is scarlet, as was the custom for the Lanciers. If I were to do them again, I might choose the 6th regiment instead with its ocher leather work and the possibility of Madder Red trousers. What thrills, LOL! 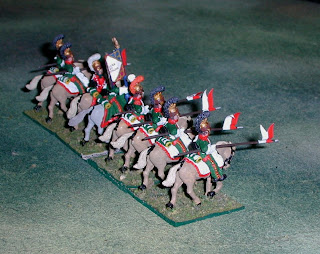 Final view of the 1st Lanciers
Although the Imperial Livery was introduced in 1812, the evidence is that, at least initially, the trumpeters of the Chevau-Leger Lanciers did generally wear reversed colors. Readers of this blog will already know I'm no fan of the later Imperial livery, and thus the trumpeter in my regiment has a scarlet coat with "reversed color" dark green facings. There is evidence that the trumpeters of the Elite Companies of the first and 2nd regiments may have initially worn dark blue coats with regimental facings trimmed in white lace, and wearing white epaulets; however, this may also be confusion with their 1815 uniform. Upon conversion to the Royal army after Napoleon's first abdication in 1814, the trumpeters adopted "Royal Livery" which had dark blue coats with white and crimson lace on the facings. To save time and money, upon Napoleon's return in 1815, the lace was changed to plain white, but the rest of the uniform was retained as is. 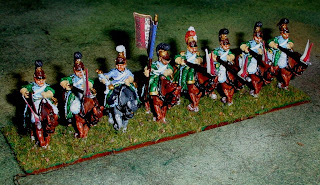 These spiffy fellows are the 5th Chevau Leger Lanciers
They were painted only about six months ago; hopefully the improvement in my technique is evident! I have to confess that this is one of my favorite units. In my original army, these guys were Hinton Hunt figures instead of Scruby, and they were veterans of innumerable, wildly successful charges. Just the threat of the 5th charging was enough to make opponents nervous... or at least, so I imagined! I'm delighted to have the Regiment back in my forces, and hope they will continue the illustrious tradition of their predecessors! 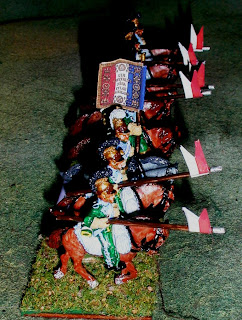 The 5e Chevau Leger Lanciers at the charge!
Note the yellow edging to the green portmanteau, common to all Lancer regiments. They have the proper 1812 model tricolor standard﻿; I assume this was square and not a guidon. Wargames Foundry figures as with the first. 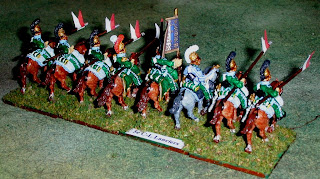 5e Cheavu-Leger-Lanciers from behind; the elite company figure is an officer.
Note the gold epaulets and trim on the officer's shabraque, as well as the plume. The trumpeter is once again resplendent in his stubbornly retained reversed colors, and note the black sheepskin saddle. As usual in the French army, the trumpeters ride a grey or white horse whenever possible.
The 7th, 8th and 9th regiments wore a completely different uniform (not illustrated);  dark blue kurtka jacket similar to the Polish Lancers of the Guard and the uhlans of the Grand Duchy of Warsaw, as well as the czapska. The 7th and 8th regiments had primrose yellow facings on the lapels, cuffs, seams, and turnbacks as well as on a double stripe down the outside of their dark blue pants; the only distinction between the two regiments was that the 7th had a yellow collar piped dark blue, and the 8th had a dark blue collar piped yellow. The 9th regiment was uniformed the same as the 7th, but substituting buff (chamois) for yellow. The troopers of all three regiments had white buttons, and their czapskas had dark blue tops piped in white braid. The elite companies wore white epaulets for the 7th and 8th regiments, and red for the 9th. Until the Imperial Livery took effect gradually starting in 1812, the trumpeters wore reversed colors, with additional white lace around the collars, cuffs and lapels. The trumpeter's czapskas had yellow tops for the 7th and 8th regiments, and buff for the 9th.
That's it for now; hope to report on my Die Fighting playtest soon!
Peter
﻿
Posted by Gonsalvo at 3:12 PM