The uniforms of the Hussars were very complicated and extremely expensive. Their heavily laced shell jacket or dolman, or the fur trimmed pelisse were usually both worn only in full dress, assuming the soldier actually had both. Of course, in my own miniature armies, they always do, and Full Dress is the order for the tabletop! The following table gives the distinctions of the various regiments of French Hussars:

The second listing under lace/buttons applies to the officers, the first to the troopers.

* Several sources show the 8th Hussars as having red  (or red mixed with dark green) lace and white buttons, probably starting sometime after 1805.

Another detail of hussar dress were the “barrel sashes” worn around the waist, forming vertical bands of alternating colors usually red/white or  red/yellow according to the lace color, but at least in the case of the 8th regiment, red/green was known as well. Finally, the  elaborately decorated covers of the hussar’s sabretaches formed yet another item of delicious extravagance. There were many variations in pattern, usually based upon the uniform colors of the regiment, and the regimental numeral along with wreath or eagle motifs. On campaign, these expensive items were often covered by plain black leather bearing the regimental number in white or yellow metal, or simply left home! Later in the Empire, these simpler devices were made regulation, but is doubtful that older designs were retired by those who already owned them! The Sabretache listing below is far from exhaustive, most regiments having several different patterns in use at any one time...

Troopers of the 1st company, 1st squadron, or compagnie d’ elite, usually wore colpacks with red plumes and cloth bags. Officers of all companies in the hussars often wore the colpack as well. They also substituted gold for yellow and silver for white lace, etc, wherever they appeared in the troopers uniform. Bandoliers of colored leather with metal ornamentation were also common for Hussar officers, at least for full dress wear.

Until the introduction of the Imperial Livery in 1811, Hussar trumpeters would usually have worn reversed colors for both the Dolman and pelisse, and sometimes even the pants. Trumpeter shakos might be like those of the troopers, or made with colored fabric or white or black Colpacks might be worn. Not surprisingly for troops with such flamboyant uniforms to start with, some regiment’s trumpeters were dressed distinctively in colors that were soley the whim of the Colonel. One suspects the more somber Imperial Livery “wore out” rather quickly and that non regulation garb for hussar trumpeters returned after a fairly brief interval!  Existing uniform sketches would seem to confirm this speculation. As with other French cavalry, the trumpeters generally rode grey or white horses, and their sheepskin saddles were customarily black instead of white.


Tim Reese's schematic drawings of French Hussar uniforms are an excellent reference in general, and illustrate at least one trumpeter variant for each regiment as well.


The Napoleonistyka site’s section on uniforms includes the glorious plates of French Hussars from Fred and Liliane Funken’s L’Uniforme et les Armes des Soldats du Premier Empire. I bought my copy of this work at age 15 way back in 1970, and taught myself to read basic French to make use of it. That was soon followed by Knoetel’s Handbuch der Uniformkunde and an understanding of basic German, which improved greatly when I took 2 years of German in college, that language being highly recommended for Chemistry majors back then, much of the early Chemical literature and encyclopedias (Beilstein!) being in German. I was more interested in being able to read Knoetel, though! I also have J.O.B’s plates and others on CD, courtesy of Uniformology, a compact but not always terribly easily searched format.


For those of us who find painting sabretaches tedious, but the effect worthwhile, there is this excellent sheet of  Aldo Stocco's print-out Hussar Sabretaches as listed on Robert Egar’s “The Napoleonic Wargamer” blog. As I do not have permission to share Mr. Stocco’s fine work, I have provided the link above.


Both fascinating, and proof that full hussar kit is no less expensive now than it was 200 years ago, is this French company making and selling Reproduction Sabretaches They are quite beautiful, but average 500 Euros each! I imagine some of these images could be manipulated and printed out for use on 28mm or larger figures as well. Hmmm!


Well, time to move on to some pictures of my own Hussar regiments. These are all Wargames Foundy figures. 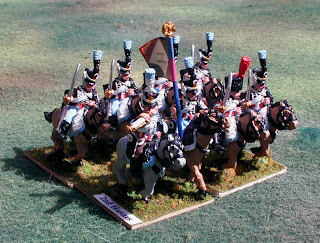 This is the 2e Hussars, dressed in marroon brown dolmans and pelisse, with sky blue pants and facings. 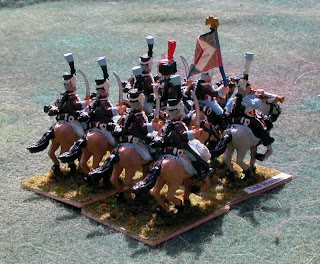 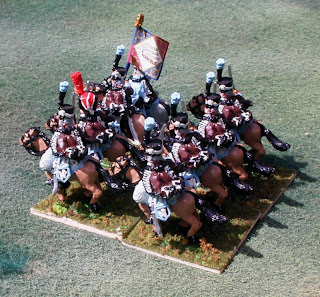 This picture shows the sabretaches well. 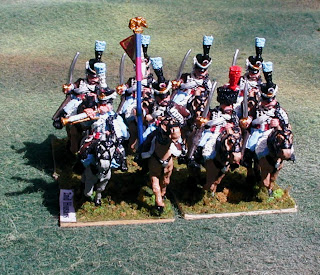 The trumpeter wears "reversed colors"; note also the difference in the plume colors. 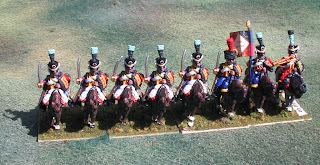 This is the 4e Hussars; this particular regiment has always been my favorite for some reason. 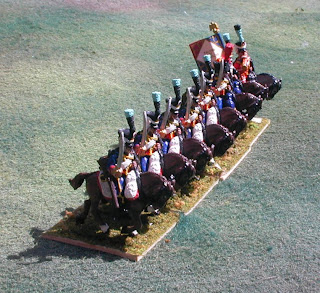 The 4e Regiment has dark blue dolmans and pants with red pelisse. In away this is a bit reminiscent of the Chasseurs a Cheval of the Guard, substituting blue for green. 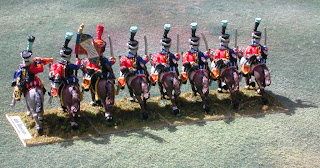 The trumpeter once again wears reversed colors with a different plume variant; even the sabretache colors for this trumpeter are different from the troopers. 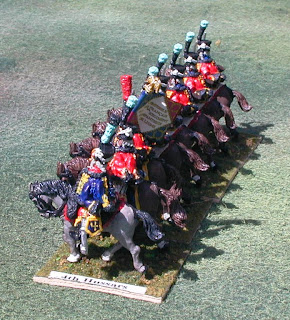 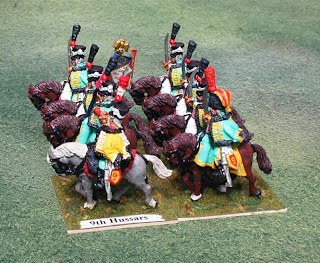 Here we have the 9th Regiment of Hussars. The trumpeter's sabretache is once again different in coloration from that of the troopers. 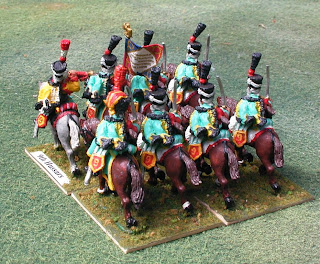 Rather than the usual reversed colors, this trumpeter wears a more fanciful design, doubtless a caprice of the Regiment's colonel. This particular variant is described below. 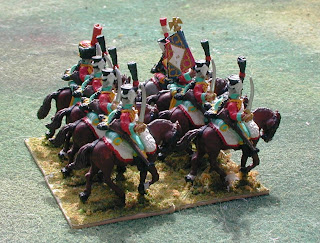 Another view of the 9th Hussar regiment. 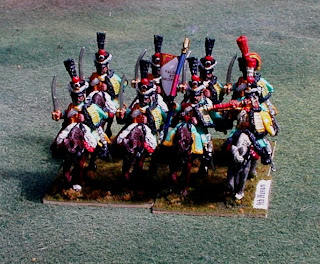 The 9th regiment of Hussars; note the colpack worn by the Elite company.


4th Hussars: Knoetel shows an officer wearing black colpack with red bag and plume, more or less regulation uniform, but grey fur on the pelisse. Sabretache red with yellow border and large “4” in the center; troopers abretache similar but yellow eagle in the center with small 4 below.  Osprey shows trumpeter (1804-5) with reversed colors including scarlet pants, dark blue and red flamme trimmed yellow wrapped around the shako. Osprey also shows a Trumpet Major (1810) in reversed colors, but with red mixed with yellow cords on the pelisse (and presumably dolman, if worn), a scarlet shako also with the same colored cords. Black plume.


5th Hussars: Knoetel shows  troopers (1807, 1808) with medium blue shako and white plume, another with a  black shako with medium blue topped white plume. Sabretache variants red center with yellow border piped white, one with just a large yellow “5” in the center, another with the same surrounded by a green wreath. Osprey shows trumpeter with light blue dolman with white cuffs, scarlet pelisse  (black fur) and pants. Shako covered with white fabric, yellow cords and plume(1805) . Hourtelle (1809) shows a trumpeter with whitepants and dolman (blue cuffs and collar trimmed red), and blur pelisse (black fur). All have yellow lace and buttons. Hako is blue with a white plume. Trumpeter’s sabretache is blue with yelllow border piped red, yellow eagle with “5” below it, all surrounded by a green wreath.


8th Hussars:  Knoetel (1812) shows a large number of variants in headwear including the tall “shako rolleau”) covered in red fabric, as well as the earlier shako, and of course the colpack  for the elite compnay. Some have white lace on their uniforms, some red, some red mixed with green!  The trumpeter wears an all red uniform with dark green lace and barrel sash, white plume in place of the black of the troopers. Funken (1804-1806) shows trooper with red lace on dolman and pelisse, green lace on pants.


9th Hussars: Buquoy shows a trumpeter, presumably of the Elite company, 1812 wearing a scarlet dolman and pants with yellow braid, golden yellow pelisse with white fur and yellow braid, white colpack with red bag and light blue cords and plume. Sabretache red with golden yellow border and grenade emblem in the center. JOB shows a trumpeter of the same regiment, center company, 1806-12 wearing a golden yellow dolman, scarlet pelisse and pants, turquoise shako with yellow plume and cords, and white buttons and lace on the dolman (red collar) and pelisse, black fur and black lace on the pants. Light blue mixed with white trumpet cords. Hourtelle shows a similar uniform, except the lace on the dolman is blue.


12th Hussars:  Osprey shows a trumpeter of the 9th Hussars (bis) in 1812, the parent unit of the regiment, wearing yellow pelisse (black fur), yellow dolman with scarlet collar and cuffs, white buttons and braid, and light blue pants with scarlet stripe on the seem. His black Colpack has a scarlet bag piped white and a scarlet pom pom. Also described in 1813 after the name change is a new trumpeter’s uniform consisting of white dolman and pelisse with scarlet cords/lace, and light blue collar and cuffs on the dolman. the pants were light blue with white lace.

I hope you enjoyed this survey of the uniforms of the dashing Hussars. This concludes my coverage of the French Line Cavalry, having previously addressed the Chassuers a Cheval, Dragoons, Cheavu-Leger Lanciers, Cuirassiers and Carabiniers. The Cavalry of the Guard will be covered in the future as well.

SOURCES:
Weblinks as listed within the text of the posting above
Uniformology CD’s of uniform plates including those by buquoy, Marbot, JOB, and Knoetel.
E.G. Hourtelle, Austerlitz: the Empire at its Zenith and Wagram: the Apogee of the Empire. Histoire and Collections, Paris, 2003 and 2005 respectively.
Emir Bukhari and Angus McBride, Napoleon’s Hussars. Osprey Publishing, London, 1978 (reprinted 1989).
Fred and Lilliane Funken, L’Uniforme et les Armes des Soldats du Premier Empire. Casterman, Paris, 1968. (the 2 page plate in the center of this book, depicting a group of hussars from a variety of regiments charging, should enough to convince almost anyone they need some of these dandies in their army!)
Posted by Gonsalvo at 12:41 AM