The Russian Imperial Guard infantry had its origins in the two original original regular infantry units of the Russian Army established by Peter the Great circa 1683, the Preobrazhenskii* and the Semenovskii regiments. The Izmailovskii regiment was added to the Lifeguard circa 1730. The Lifeguard Jagers were increased from a battalion to a Regiment in 1806. An Imperial Militia battalion was raised in 1806 and entered the Guard in 1808 (per Viskovatov); it was renamed the Finland Lifeguard Battalion, and later became a regiment (1811). The Lithuanian Guards were raised in 1811, first as a battalion and later a 3 battalion regiment; it was organized as Light Infantry. In 1813, the Pavlovsk Grenadiers and Life Grenadiers were added to the Guard, ranking as "New" or "Young" Guard regiments.
* There must easily be as many translations of Russian names as there are authors/translators! I am using the names as seen in Mark Conrad's translation of Viskovatov's Historical Description of the Clothing and Arms of the Russian Army (1851), here. This is perhaps the key reference for the Russian Army of this era. I figure that if he can actually translate from the original Russian, he stands at least as good a chance of getting the names right as anyone else!
Russian Guard Infantry uniform distinctions, 1812-13
The overall pattern of dress was the same as the Line regiments. All regiments had red shoulder straps, cuffs, and turnbacks. Buttons brass. Petlitzi yellow with thin red center (except on collars (only) of Semenovskii and Izmailovskii where instead the blue or green color was allowed to show through, and the Life Grenadiers and Pavlosk, both of which retained the white petlitzi they had had as Grenadier regiments); petlitzi were gold for officers in all regiments. Shakos with brass eagle plates. White cords, silver for officers.
Now on to some pictures of miniatures from my Russian Napoleonic army... 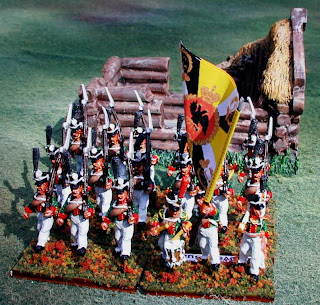 This is the Lithuanian (or Litovski) Lifeguard regiment, circa 1812-13. it is distinguished by the red lapels, as well as red collars and cuffs. Like all Russian Guard regiments, there are two loops of lace boutonnieres or "petlitzi" on the collars, and three on the cuff flaps. The Guard Star (of St Andrew) also appeared on much of the equipment of the Guard regiments. 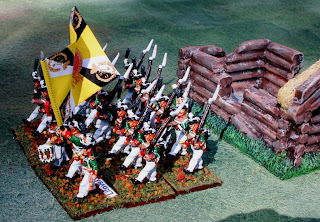 The flag is from the excellent Napflag site. The petlitzi were yellow with a thin central red stripe (gold for officers); the same pattern was used for the extra lace on the uniforms of the drummers and musicians. NCO's had only a single lace loop on the collar, the second loop being their rank lace. 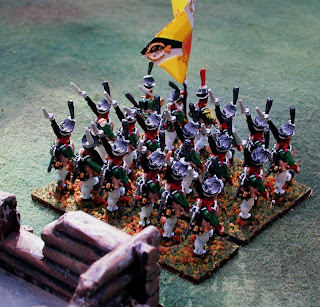 Rear view of the Lithuanian Lifeguard regiment. Note the red plume on the musician's shako, the same as for a line (grenadier) drummer. All of the companies of a Guard battalion otherwise wore the tall black "grenadier" plumes. The colors of the shako pompoms were the same as for the line. 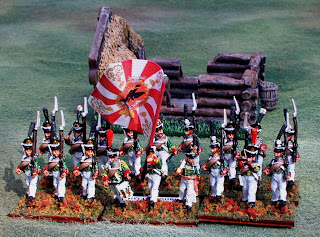 This is one of the two senior units of the Russian Lifeguards, the Semenovskii. it is distinguished by blue collars piped red; evidently the lace on their collars (only) should have a blue center (matching the non-red collar color). 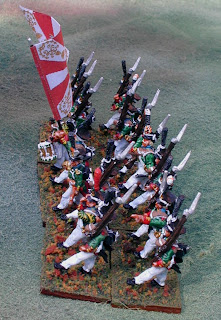 Another view of the Semenovskii Lifeguards, showing a good view of the yellow lace on the fifer's uniform. The goosetep these Sash and Saber figures are modeled in certainly fits the Guard regiments well, the officers of which were generally drawn from the highest levels of society. They received pay two grades higher than that of a comparable officer in a line regiment! 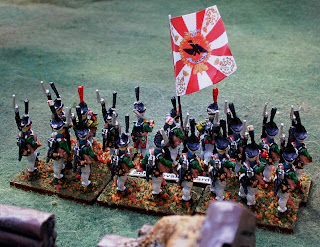 A final, rear view of the Semenovskii Lifeguard regiment; the flag is once again printed out from the Napflag site. 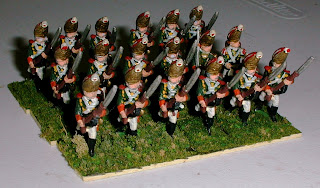 This is the Pavlovsk regiment, still in their earlier Grenadier uniform. These first generation Minifigs evidently haven't yet been equipped with the new uniforms ordered on their elevation to the Guard in 1813! 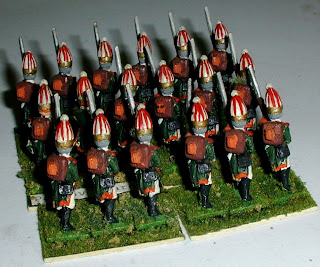 Rear view of the uniform showing some detail of the backs of the Miter caps. They should have received shakos before the battle of  Friedland in June 1807, but as a result of the usual delays in implementing new uniform regulations, they were still wearing the old Miters. Actually, these figures were painted nearly 30 years ago, and there are a number of errors. The collar should be red instead of white, and the shoulder straps should be white instead of red. There should also be a white band across the bottom of the rear of the miter. Finally, only the Grenadier companies should have the tall Miter; the other three should have the shorter Fusilier miters. As few if any companies manufacture figures with these, I suppose we'll have to settle for them all in the more imposing, tall miters! 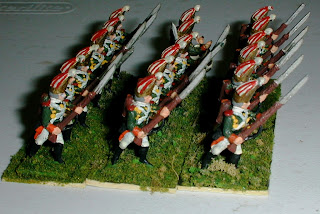 The Pavlosk Grenadiers greatly distinguished themselves by their conduct at Eylau and Friedland, and as a result, alone among the Russian Grenadiers, the Tsar decreed that they be allowed to retain the now rather ancient appearing miter caps.  They still retained them when they were taken into the Guard. As most wargamers know, the Pavlosk Guards were still wearing them in 1914. Doubtless the cloth parts must have been replaced several times over by then! 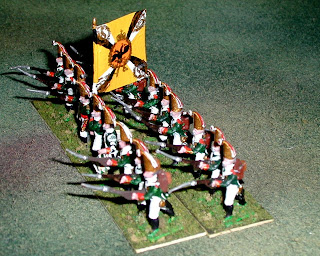 These are "new" (2nd generation) Pavlosk Grenadiers, still in the pre-guard uniform... and with the same errors noted above; I shall have to correct them some day! 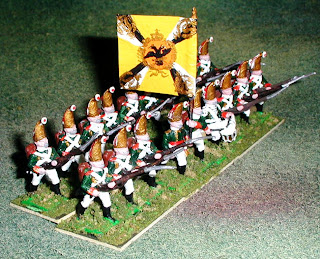 The flag, as with most of my flags until the past 15 years or so, was hand painted. 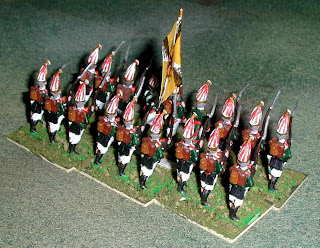 A final, rear view of the Pavlosk Grenadiers, here also somewhat antique in still wearing the powdered hair queues, which were otherwise abolished in 1806.
до следующего времени (until next time),

Sources:
Nafziger, George, The Russian Army 1800-1815. RAFM Company, Cambridge, Ontarion, Canada, 1983.
Haythornwaite, Phillip and Hannon, Paul, The Russian Army of the Napoleonic Wars (1): Infantry 1799 - 1814. Opsrey Publishing Ltd, London, England, 1987, reprinted 1991.
Viskovatov, A.C, Historical Description of the Clothing and Arms of the Russian Army, Military Topography Office, St Petersburg, Russia, 1841 and subsequent, as translated by Mark Conrad and available on his site as previously cited.
Also, on the website, "Napoleon, his Armies and Enemies", the article on the Russian imperial Guard:
http://www.napolun.com/mirror/napoleonistyka.atspace.com/Russian_guard.htm
Posted by Gonsalvo at 12:05 AM