I thought that for the final post of 2011, I'd do a sort of Blog Christmas card, and use the opportunity to show the nine regiments of Minifigs Austrian "German" line in helmets which still compose a big chunk of my army. And then I had the doubtless ill-considered idea of a Christmas song parody. For better or worse, here it is! 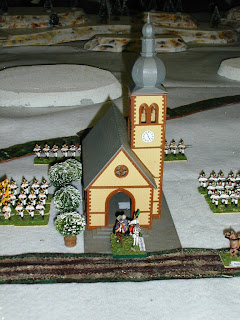 I'm dreaming of an Austrian Christmas...
armies set out for Marengo.
Or for Hohenlinden, the bayonets glisten
while boots are marching very slow! 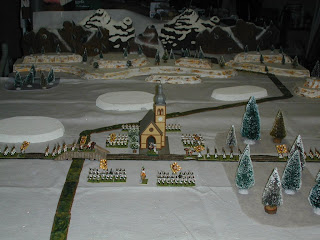 I'm dreaming of a Kaiserliche Christmas
with every OOB I write.
May your troops be well painted, for the fight.
And may all your Infantry... wear white! 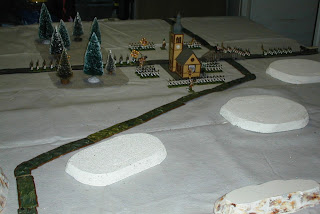 He's a quick review of the troops by Archduke Charles (Erzherzog Karl) himself, as they assemble for church services on Christmas Day - perhaps in Salzburg? 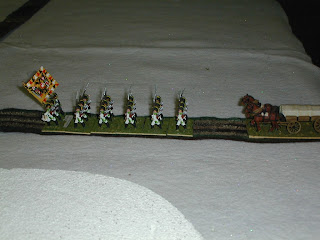 I.R. #9 Czartoryski, with apfelgrun ("apple green") facings and yellow buttons. This regiment was recruited in the Low Countries (Walloon) until those territories were lost, then later in Galicia.
All of these Minifigs were painted by me some 30+ years ago. They certainly aren't up to my current painting standards, but I still love their hand-painted standards, and they are all true veterans of the tabletop! Note the inevitable wagon of the Austrian supply trains! 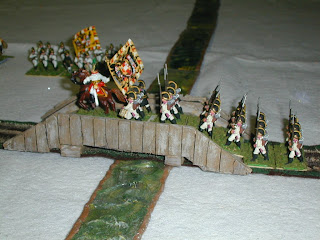 I.R. # 1 "Kaiser Franz", with pompadourrot facings and yellow metal buttons. This regiment was recruited in Moravia. The personal regiment of the Emperor, this facing color is sometimes described as dark red; here I have chosen a more magenta shade which is close to that indicated in Hollin's work below. The bridge was scratch built, as were the rivers.
There is an excellent table of facing colors at the Napoelon Guide site with examples of the shades at the Histofig site and also perhaps the most definitive illustration of the various shades by Dave Hollins and Mike MacGillivray here on the DeepFried HappyMice site. Finally, there is a table of  best-match Vallejo colors corresponding to many of these here at Iannick's great Clash of Empires site.
ADD April 2012: From a TMP post today comes this interesting link to Tranquillo Mollo's chart of facing colors (names and actualk shades depicted) for the Austrian Army in 1815, all branches, from the Anne S. K. Brown collection. 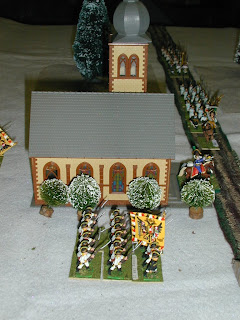 I.R. #22 "Coburg" with kaisergelb ("emperor yellow") facings and white buttons. This regiment was recruited in Illryia, later changed to Moravia. 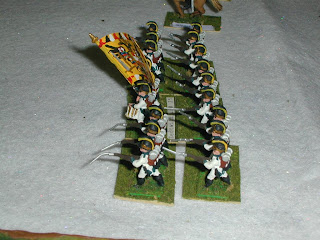 I.R. # 25 "Zedtwitz", which changed names often during the Napoleonic wars. Its meergrun ("sea green") facings and white buttons, however, did not. The regiment was recruited in Bohemia. 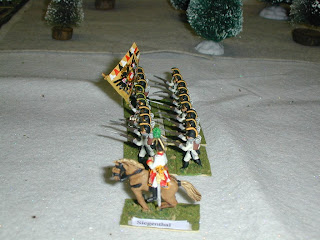 This is I.R. #49, Baron Kerpen, with hectgrau ("pike grey") facings and white buttons. It now appears the shade should have a decidedly blue tone to it, rather than the neutral shade depicted here. This regiment was recruited in Lower Austria. 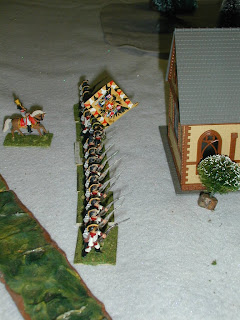 Here is I.R. # 44, "Bellegarde", with krapprot ("madder red") facings and white buttons. This regiment was recruited in Italy, later changed to Germany. 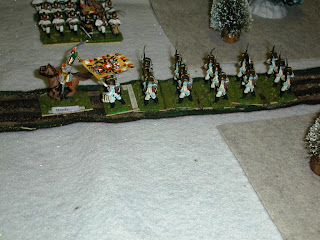 Hastening to the Church we have I.R. #4, the famed "Hoch und Deutschmeister" regiment, recruited in Lower Austria. Showing their himmelblau ("sky blue") facings and yellow buttons, all the officers and many of the men were members of the Teutonic Order, and the Inhaber of the regiment was the current Grand Master of the Order. This one definitely warrants an "elite" rating! 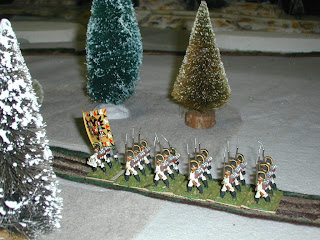 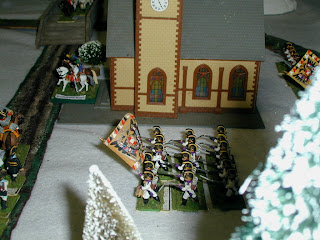 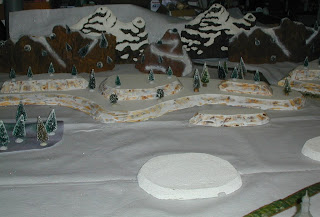 This carol, perhaps the most beloved of all, was composed in Austria just after the end of the Napoleonic Wars. Here is the short version of its origin, from this site:
"It was Dec. 24th ,1818 in a small Austrian village called Oberndorf, just hours before Christmas mass and pastor Joseph Mohr was in a bind. His musical plans for the evening church service were ruined since the organ of his church (St. Nicholas Kirche) had broken down recently due to a recent flooding of the nearby river. What could he do? In a moment of inspiration, he grabbed a Christmas poem he had written two years earlier and quickly set off to the neighbouring village, where his friend Franz Gruber, the church organist, lived.
It is believed that Franz Gruber was able to produce on that night in just a few short hours, the first version of the world renowned Christmas hymn “Stille Nacht”, written as a guitar accompaniment. The song that we sing today is slightly different from the original version - it is believed that folk singer and choir groups altered the original melody slightly as they performed the carol throughout Europe in the ensuing decades. The English version we know today was written by the Episcopal priest John Freeman Young, however the standard English version contains just three verses, whereas the German version contains six. (only verses 1, 6 and 2 from the original Joseph Mohr version are sung in English.)"
Stille Nacht, heilige Nacht,
Alles schläft; einsam wacht
Nur das traute hochheilige Paar.
Holder Knabe im lockigen Haar,
Schlaf in himmlischer Ruh!
Schlaf in himmlischer Ruh!

Wishing all of you, both near and far, a joyous Christmas, and happy, healthy, and prosperous New Year! May there indeed be Peace on Earth, and the hope that one day wars will be limited to those we fight on out tabletop, as H.G. Wells himself proposed!
Peter 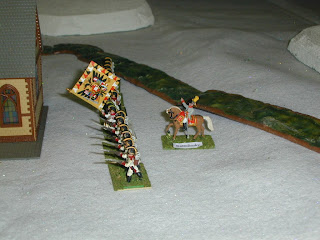