Hiller's wing of the Austrian Hauptarmee became separated from the main body by the battles of Abensberg and Eggmuhl, and he retreated over the Isar at Landshut, A bitter rival of Erzherzog Karl, Hiller decided to turn on his pursuers in an attempt to inflict a significant defeat upon them. He caught Bessieres' command half over the Rott river at Neustadt. In this scenario, Wrede's Bavarian Division, supported by Jaquinot's Light Cavalry Brigade, must delay the Austrian attack long enough for the supporting French Division of Molitor to come up and cover their retreat. This is a quite manageable action for two players, here using Field of Battle rules and one unit for every 400 Cavalry, 600 Infantry or six guns. 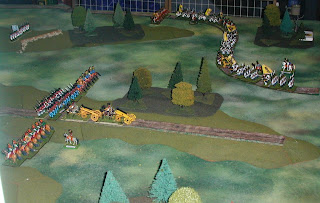 Set up: GM Mesko's Advanced Guard Brigade (foreground) advances on Neumarkt via the main road, whilst a long column of whitecoats under GM Bianchi, screened by the Chevaulegers of FML Vincent's command marches on the Bavarian left (background). 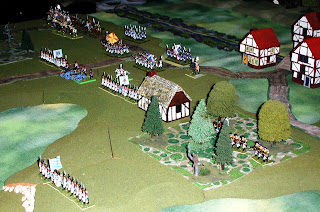 The Allied position after their first MOVE: Jaquinot's LC in the distance, Minucci's Bavarian Brigade in the front, with Bianchi's brigade (I have substituted Baderners and Hessians for Bavarians on the tabletop for this Brigade) move up in support. Neumarkt and the River Rott are to their rear. 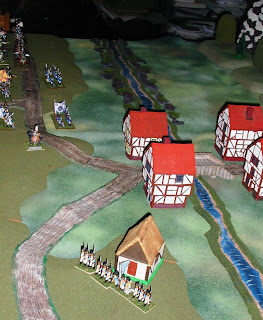 Neumarkt itself, with a Bavarian battalion deployed near the cloister of St Veit. 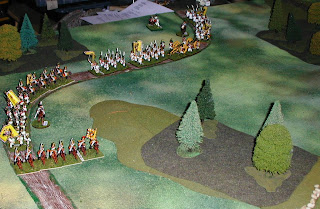 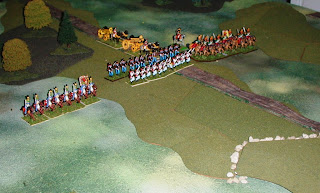 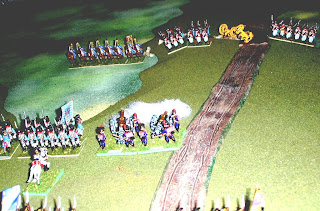 Accurate fire by the Bavarian foot battery has knocked out the opposing Austrian Cavalry battery as it advances! 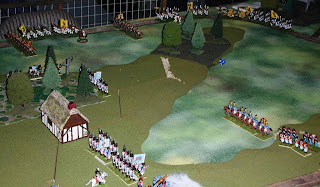 Wrede consolidates his position, while the Bavarian Jagers take up a position in the woods that threatens the flank of Reuss-Plauen's long column. 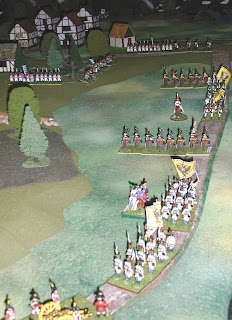 Reuss-Plauen advances boldly in an attempt to crush the Bavarian left and turn Wrede's flank! 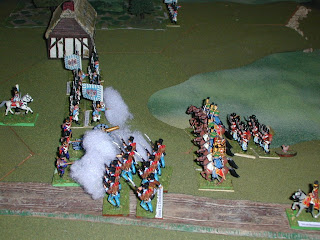 Mesko keeps the pressure on Bianchi, as the Grenz of his command attack the Bavarian line; one of the Grenz has fallen back in disarray as a result of Bavarian musketry ("Out of Command") - note the "chicken" marker behind them denoting same! 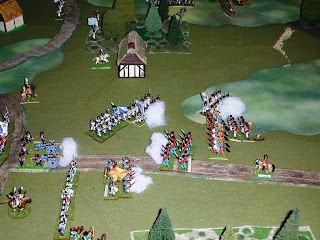 The Bavarians have given some ground in the center, but are now supported by the fresh troops of Becker's brigade 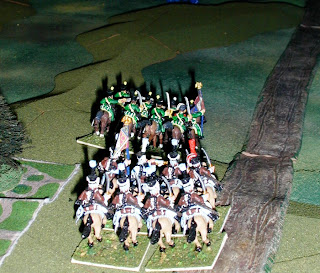 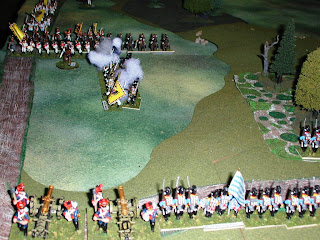 The Bavarian Jagers have launched a bold (? rash) charge from their woods onto the flank of the Austrian column, but Reus-Plauen has coolly countered the threat with an Austrian battalion guarding the flank of his March columns. Supporting French artillery forces the Austrian Column to deploy before advancing further. 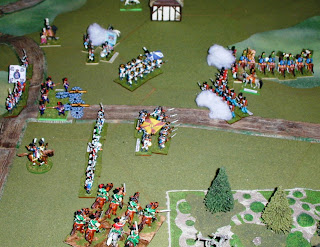 The charge of the Austrian Hussars has routed a Bavarian battalion (seen in a mob moving to the rear), whilst the Grenzer move forward once again. 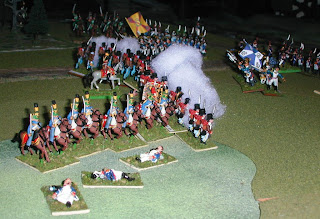 Casualties litter the field where the Hussars rode down the Bavarian infantry! 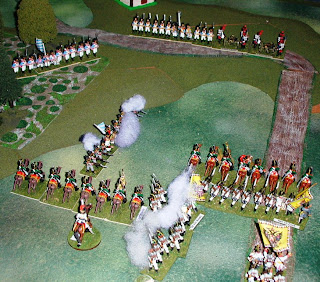 The Bavarian Jagers have defeated the Kaiserlick infantry battalion, but are now themselves very precariously placed, with the Chevaulegers now threatening to charge their flank in turn! 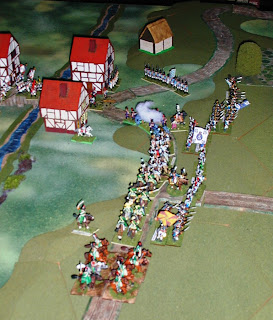 Having bought sufficient time, Wrede has pulled back his troops and consolidated his position, as fresh French troops arrive to cover his retreat back across the Rott.
This scenario was interesting, having the Austrians bear the burden of the attack, and needing to press the Allies in an attempt to crush Wrede before he can organize an effective fighting withdrawal. Barry and I played this one out a year or so ago, and Barry rolled very poorly for the Austrian Leadership die rolls, so the attack was rather slow to develop, and I was able to delay his attack long enough to make good my escape without suffering excessive losses.
Historically, Hiller resumed his retreat after inflicting a significant check upon Wrede, as no matter what tactical success he might be able to achieve, the strategic reality was that he was isolated on the opposite bank of the Danube from Karl, with only relatively few potential crossing points available between his location  and Vienna! Wrede was given an unenviable position to fight in by the over zealous pursuit of Hiller, as  directed by Marshal Bessieres, but gave a good account of himself on this day, as did his Bavarians. This would seem to give the lie to Naopleon's famously pithy comment about the Bavarian officer folllowing the Battle of Hannau (1813), "Poor Wrede! I could make him a Count... but not a General!"
Posted by Gonsalvo at 12:45 AM