This installment will cover the bigger ships in the Avarian Fleet, along with the transports. A future third post will then cover the Avarian fighters, Star Armored Pursuits Ships, Starbombers, and space stations. This is timely as the first battle of The Chancellor Campaign is about to get under way, with a Terran Super Galactic Dreadnought hunting down an Avarian convoy, whilst an Avarian Cruiser wing (six Stellar Cruisers and a Galactic Dreadnought) attempt to intervene. 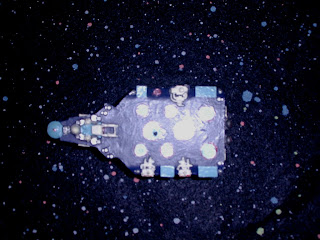 The Galactic Attack Carriers are pretty much what you'd think; the spacegoing equivalents of Aircraft carriers. They are designed to carry a large quantity of fighters, which can be configured in several different ways, through the void of space, for use in fleet actions, commerce raiding, planetary bombardment, and scouting duties. 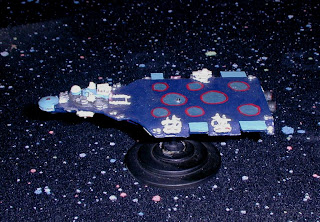 As such they have limited offensive power and decent defensive power in their own right, as well as respectable anti-fighter capabilities. 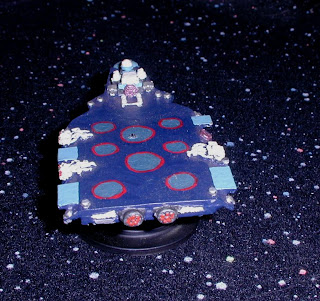 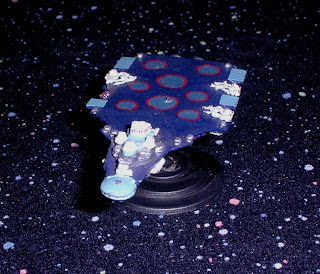 Somewhat contrary to what one might expect, the Avarians make less use of fighters than the Terrans, but more than the other races. 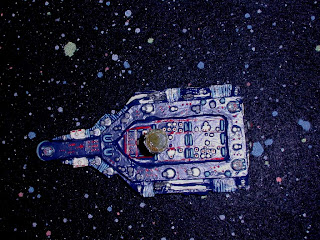 As the Epoxy seal broke on the base of this ship (easily repaired), this bottom view shows you just how detailed even the underside of these models are. Impressive! 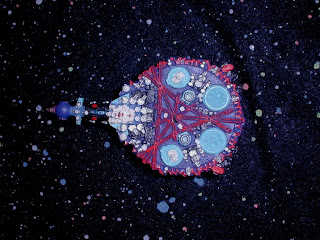 This variation of the Galactic Attack Carrier for the Avarians was released later in the history of the line. According to the background material, the introduction of this class indicates a potential shift in the Avarian doctrine towards greater use of fighters and Carriers. 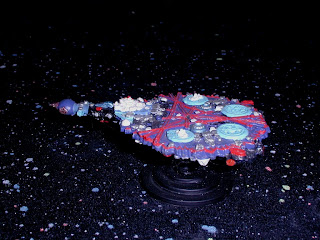 The Vulture class GAC represents a modest improvement over the older, Nest class. 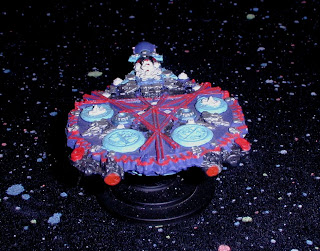 Here are the stats for this upgraded GAC: 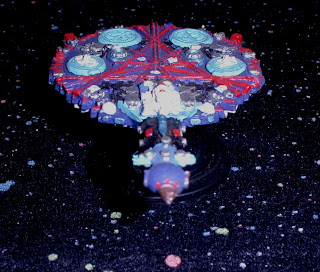 This Carrier is a very nicely detailed model indeed! 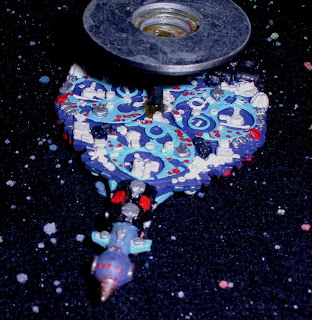 Once again, a shot of the underside shows the lavish attention to minor details and sculpting characteristic of the Starfleet Wars (now known and avaiable as Galactic Knights) ships. 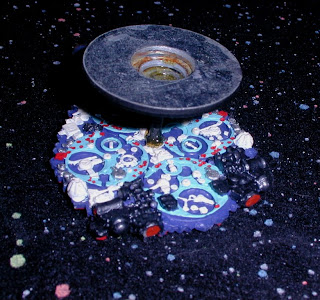 Ventral view of the Vulture from the rear, showing the detail associated with the ship's engines 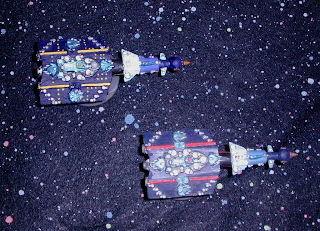 The Galactic Dreadnoughts were the strongest (and largest) ships in the original release of the Starfleet Wars series. Here are a pair of Avarian Condor class GD's. 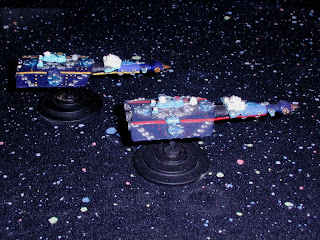 Once again, according to the background materials, until recently the Avarians had focused much more on their powerful Galactic Battlecruisers, but have started to produce more of these bigger ships recently. 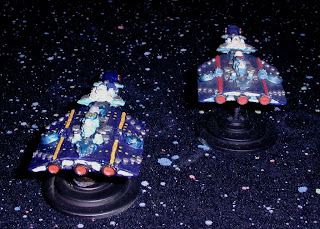 Here are the stats for the Condor class Avarian GD: 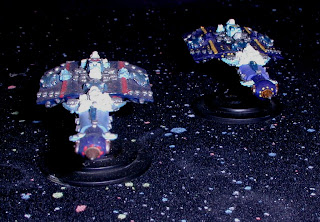 As you can see, these ships are at least  twice as powerful as any lesser craft... Battle Stations! 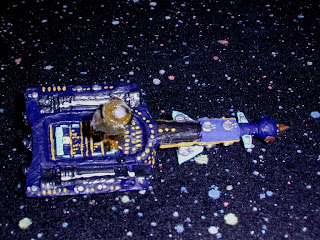 An underside view once again reveals the wealth of detail not even seen during usual game play! 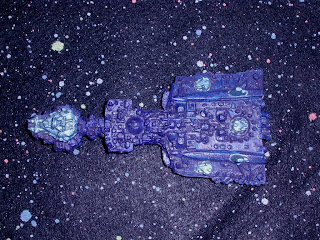 Among the last releases in the Starfleet Wars series were these immense ships (the model itself is 6" long by 3 " wide). Truly in a class by themselves, the Super Galactic Dreadnoughts are literally capable of defeating an entire enemy fleet all by themselves! One of the last ships I bought, you can see that I only started painting it. I will have to return to it and finish the job... maybe later this year? 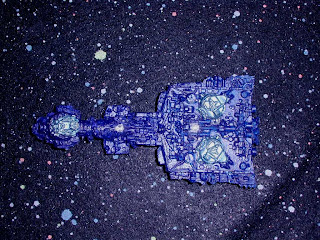 Here are the stats for this Behemoth of space, the Gryphon class Super Galactic Dreadnought:

As if that wasn't enough, these ships also get a "free" additional Offensive and Defensive factor that doesn't have to be powered, and is only knocked out when the ship has suffered 75% or more damage. In the case of the Gryphon, this is 7 for the Beams, and 8 for the shields!  Ruffle my faathers! 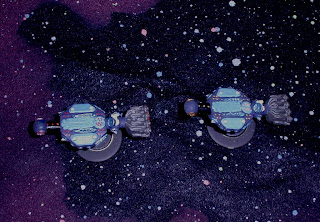 At the opposite end of the spectrum, we have the lowly transports. These Turkeys are essential to move troops and resources along the spaceways of the Avarian United Worlds. 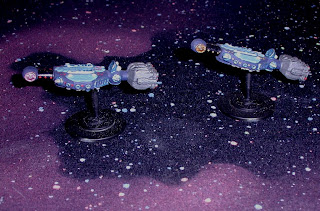 Because of the need to optimize the space devoted to cargo, these ships have less capable engines, and are limited to a speed of "4", whilst all warships have a maximum speed of "5". Thus, they are incapable of out running warships unless their pursuers have suffered significant damage to their engines. 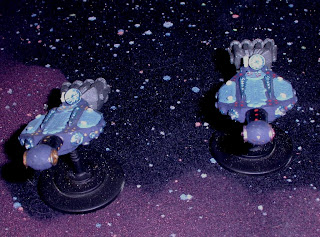 The upcoming battle in the Chancellor Campaign, fought on the approaches to the Vertex system, will feature a large number of these Transports. Perhaps "Sitting Ducks" might have been a more appropriate name for the class, LOL? 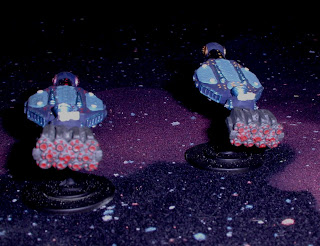 Here are the woefully poor stats for the Turkey class Galactic Transport: 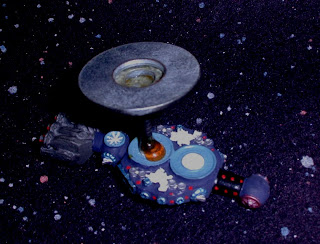 A view of the underside of a Turkey; the epoxy makes it look almost as though the base is impaling the ship and causing it to bleed. Sadly, it is likely that quite a few of these ships will be in a similar attitude after the coming battle!


Soar high, and may your aeries welcome you at journey's end...