With the invasion of Russia by the French and their Allies in July, 1812, the Militia or "Opolchenie" was raised. As Nafziger says, "These units were poorly clothed, and badly armed. Much of their equipment was makeshift; hatchets replacing sabers, pikes replacing muskets. Their organization was very inconsistent, although efforts were made to model it after the regular line units."  The basic unit of the Opolchenie was the "druzhin" or cohort/regiment. An unconfirmed theoretical organization for such a Cohort found in Nafziger was 1 Grenadier company of 116 all ranks (musket armed), 1 "Light" battalion of 4 companies armed with muskets (135 all ranks each), and 2 pike battalions, each of 4 companies (221 all ranks each). Moscow in particular raised some units that were (at least theoretically) all armed with Muskets. As time went on, these troops were often used as cadres to replace losses from the regular units. Supposedly their one universal insignia was a brass cross worn on the cap inscribed "For Faith and the Czar", from which the more familiar, later Prussian Landwehr cross was derived. Viskovatov, as translated by Mark Conrad has more details of the uniforms and flags of these troops, such as is known.

For the big Borodino game we have planned for Historicon this July, it turned out that we needed no less than TWELVE units of Opolchenie for our OOB. as no one in their right mind would ever want that many units themselves, several of our Hofkreigsrat group agreed to each raise some of the needed units. The pictures that follow are of my own contribution. These 28mm figures are from a new manufacturer for me,  Falcon Figures. I ordered them last year and picked them up in person at Historicon in Valley Forge, PA. In so doing, I had the opportunity to meet and talk with the owner/sculptor, Kai Weaver. He was very personable, and included some langniappe in the form of a few extra figures. I also purchased some Falcon Russian Jagers and Command figures, which will make an appearance here later, and will probably order at least one unit of Russians in forage cap as well. Anyway, on to the pictures... 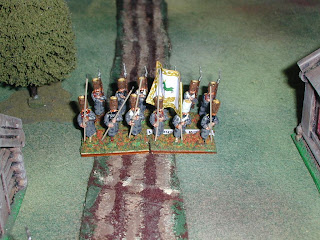 Here is my first unit. All of these are intended to represent the Moscow Opolchenie; there were many variations in theoretical dress of the troops from various districts, and doubtless even more in reality. Being their "Czar", my units are almost certainly netter dressed and more uniform than their real life counterparts, and I have taken certain liberties in representing them as well. The Moscow units generally wore long peasant robes in various shades of tan, grey or brown, with tall fur caps. This unit has dark grey coats and brown fur caps. The belts and boots are painted in a random assortment of colors; black would probably have been the most common. The packs are all black (same as for Russian regulars); I assumed they would be issued surplus and or old packs from stocks. Another view of the 1st Cohort. The officers evidently were supposed to wear the same uniforms as the regulars officially, although this was probably the exception in actual practice, especially early in the war. Drummers were also included in the establishment, although I haven't seen anything to indicate that there were any distinctions of dress for them.  I have taken the completely unfounded liberty of painting the one "staff figure in each unit, the standard bearer, with a *white* fur cap; I like the look. Hopefully it doesn't look too much like a costume form a Russian pairs figure skating event, LOL! 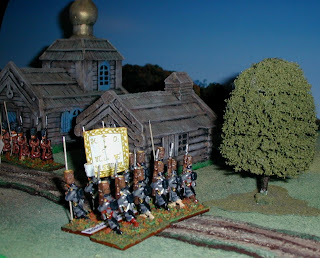 The first Cohort again, as it passes through a Russian village under the Midnight Sun, on it's way to Borodino perhaps? The standard, which is historical but not properly a Moscow unit, is derived from Viskovatov and  was kindly provided for download by Rafael Pardo on his excellent blog here. Thanks, Rafa! 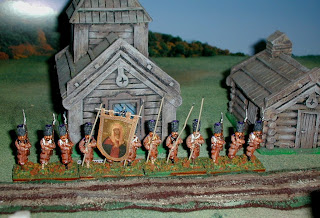 Here is my second Cohort. these drafted peasants are wearing red-brown coats and black fur caps. The icon-type flag is not strictly historical, but we do know that the icon of the Black Virgin of Smolensk was paraded before the troops on the eve of the great battle. Once again, I can't take credit for the design, but rather downloaded it from the web. try as I might, I can't find the link again; if this is your work please let me know so that I can credit and link to it!  **Update February 4th, 2011 - found the site for the Icon based flags - Pipoweb's (Italian) blog. 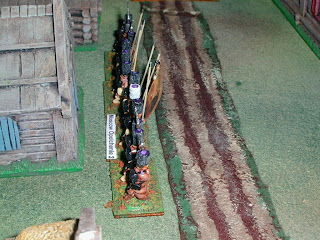 These falcon figures have smooth round tops to their fur caps...quite on my own I decided that each cohort would have this in a distinctive color unique to that unit. In addition, the Russians being almost fanatical in the use of shoulder straps to differentiate units during this time period, I also decreed the same color would appear on these. Thus the 1st Cohort had dull yellow, and this 2nd Cohort has purple/lilac. Once again., like the white caps, this is pure whimsy on my part. Still, I like the way it looks, and it's fairly subtle. 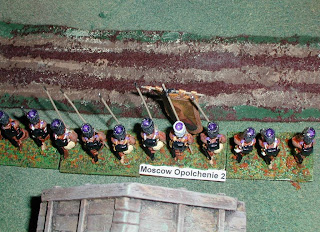 Well, maybe not all THAT subtle when viewed from above like this, LOL! 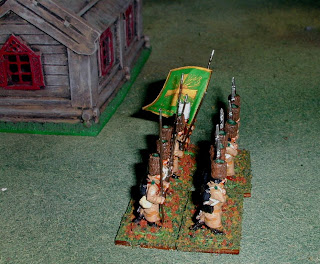 Here is the 3rd Cohort, in tan coats and brown fur hats. This flag is once again from Rafa's site. half the men have pikes, and half muskets; in reality, at least at Borodino, it was probably closer to 2/3 or even 3/4 of the men armed only with pikes! 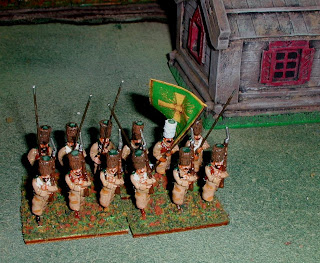 Dark green for the tops of the caps and shoulder straps for this unit, again more fantasy than even speculative... matches the flag, though! 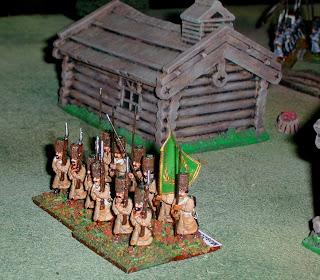 The pikes are relatively narrow gauge floral wire; with a little work with an exacto knife to open the hands up, the fit was very tight but exact. I had to drive the "pike" home by tamping them through - using my fingers to push them through resulted in two puncture wounds to the finger pads. Talk about a unit being blooded! 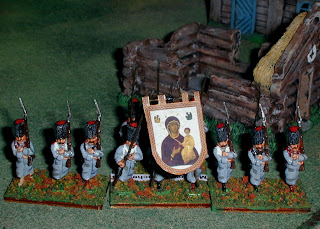 The fourth and final unit has light grey coats with black fur caps; the icon based flag used here is from the same site as the former one. All of the buildings seen in these pictures are from the Hovels "Eastern European" range; recommended! 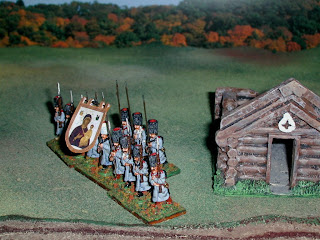 I used red for the tops of the fur caps and the shoulder straps for this regiment, deployed with the pikes in a block in the center and the Musketeers on the wings... almost a throw back to the 1600's! These pictures also mark the first time that I'm using some scenic backgrounds from Scenic Express as a backdrop; I think that worked well. 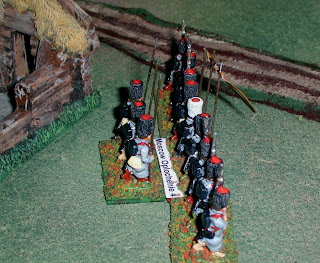 A final view of the 4th cohort; the whimsical white fur cap of the standard bearer is again very evident! Overall, I liked these Falcon figures, and enjoyed painting them. The customer service was excellent as well.

Dr Stephen Summerfield has published what is probably the most detailed information in English on this subject, "The Brazen Cross of Courage"  Regrettably, I have yet to add it to my own library, so take that into account when considering the following material. I see it is available as an inexpensive PDF download ($5) at that link, so I may yet have to get myself a pdf copy!

There is a picture of one of "Czar Barry's" Opolchenie units using Front Rank figures on his blog here. I think Greg is using Hinchliffe figures for his contribution to The Cause.

In the next few months, I'll probably do some more Starfleet Wars starship posts, a few more 1809 battle reports and hopefully start coverage of the Austrian Cavalry, plus what ever additional Russians come off my painting table during that time.

For Faith and the Czar!