At Historicon, 2008, Joe Fish, Barry Frandsen and I  ran Pikette Squared, an adaptation of the Pikette rules included in the back of Band of Brothers 2nd edition, using a square grid to regulate movement, shooting, and maneuver. We ran 3 matchups - French Italian wars vs.  of the same era, Hapsburg Italian Wars Vs. Spanish Italian Wars, and the redoubtable Swiss vs.the Burgundians of Charles the Bold. The concept for the Pikette rules was really the brainchild of my co-author, Ken Baggaley. The heresy of transforming it into a gridded game is entirely mine. Frankly, I think Ken was appalled by the idea of using the square grid, but it seemed logical to me for a simple game with a small number of small units. So, I created a gridded board using just brown paper that comes in a big roll at DIY stores, some spray paint, and some craft paints. The effect may have come out a bit bolder than I was aiming for, but it does the job. 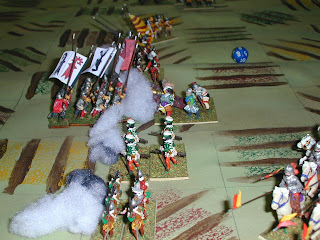 These are 25/28mm figures, from one of the Historicon games; I think this was Spanish Italian Wars vs Imperialists. 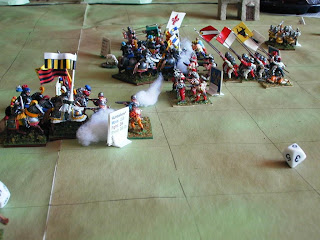 Note the use of Sheep as well as casualty figures to indicate a unit in Disorder! 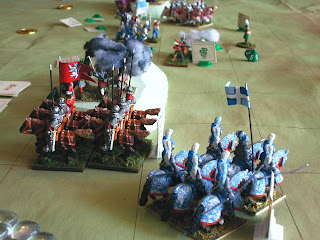 The gold coins are used to track Morale Points. This board didn't get the "checkered fields" treatment. 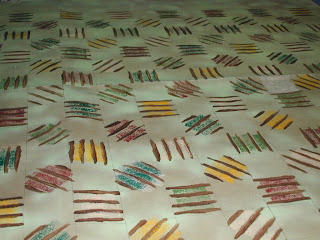 The squares are 4" on a side, which allows them to accommodate the unit sizes postulated for the game.
Barry Frandsen and Joe Fish were my indispensable right hand men for the  Historicon games, assisting with schlepping all of those troops in and out, setting up the tables, and assisting the players with the rules. I couldn't possibly have done it with out them - you guys are the best!
Next are some pictures from some Pikette games Barry and I fought out at home. The first is my Late Byzantines vs. Barry's Late Medieval Hungarians, and the other game was once again Spanish Italian Wars army vs an Imperialist army of the same era. Pikette can be thought of a bit as Piquet/Band of Brothers meets DBA/DBX. The gridded board eliminates the need for fiddly calculations of push backs, maneuvering, filed of fire and the like, although the ungridded version included in the Band of Brothers 2nd edition handles this fairly simply as well.

View of the set up for the Imperialists. 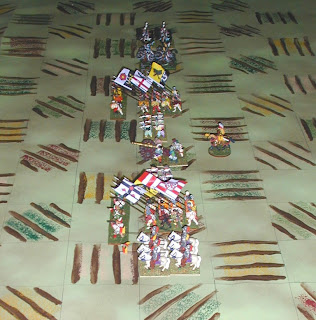 Another view of the Imperialist set up - note the 2 large Pike blocks (count as 2 units each), with skirmishers deployed to screen them from enemy fire, to which they are terribly vulnerable! 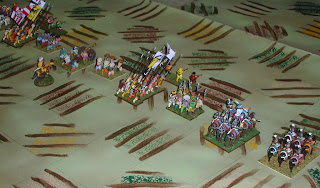 Final view of the Empire's set up - Reiters are seen... to the right. An "Army in Pikette has 12 units, plus a gun (artillery) and a General. 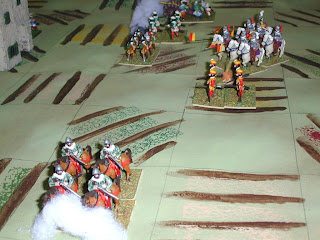 A unit of Mounted Arquebusiers is seen to the front - very mobile, but not much good at anything - shooting or fighting otherwise! 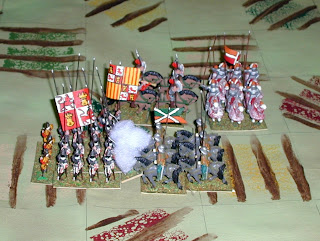 These "massive" Spanish Tercios count as three units, but they ignore Flank penalties in melee! 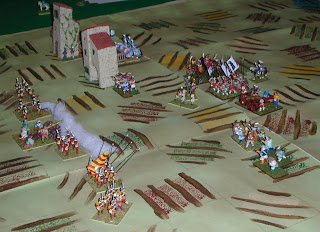 The "Army Lists" in Pikette assign each specific army a given composition, BUT at least one of the units is variable, and several have upgraded options that you may or may not get depending upon die rolls which are made at the time when you set up the army. Therefore, the army won't be exactly the same from game to game, although the core forces will stay the same. 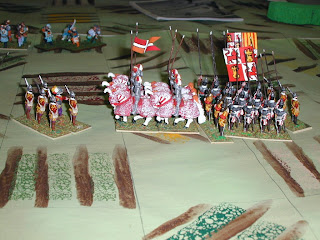 These French Gendarmes are Fearsome! 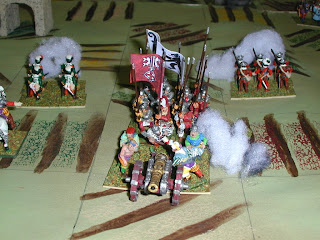 Your army's one artillery unit is useful, but its mobility is very poor. 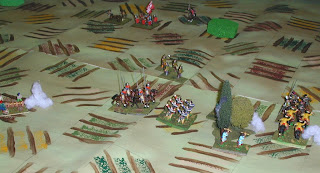 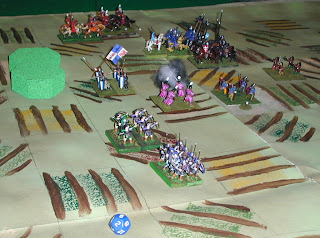 Byzantines to the left of the picture, more or less, and Hungarians to the right. 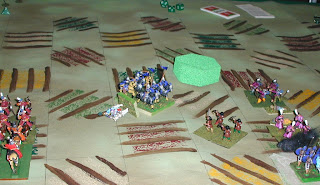 Uh-oh; it looks like the Byzantine Strategos was killed while leading a unit of his EHC; guess hiding behind the hill didn't work this time!
Pikette is really a little gem, and a fairly easy way to introduce players to Piquet concepts and/or the Renaissance era. Even with 28mm figures and using 2 stands per unit instead of one, the army size is less than 100 figures each and the 4" square grid playing area we used less 5 feet by 5 feet. The rules themselves will follow in a subsequent post.

Peter
Posted by Gonsalvo at 2:37 PM