Prussia ceded the Principality of Neufchatel to France in December, 1805, and Napoleon bestowed it upon Marshal Berthier in March of the following year. In 1807, a battalion of light infantry was decreed, although recruitment was slow - all the men were volunteers, enlisting for four years, and had to be from Neufchatel, Valais, or Switzerland. Small artillery and engineer companies were added in 1808. Berthier's Neufchatel Battalion joined the Imperial headquarters establishment in 1809, but did not arrive in Austria until after the battle of Aspern-Essling. Assigned to duty guarding the bridgehead at the Battle of Wagram, it evidently saw some action near the end of the fighting.

The battalion was sent to Spain in 1810, where it mostly participated in escort and counter insurgency operations, although it did participate in the siege of Ciudad Rodrigo. The Battalion was recalled from Spain for the campaign in Russia in March, 1812, but did not arrive in time for the Battle of Borodino. The Neufchatel battalion fought hard at Krasnoi, and again at the Beresina, but largely ceased to exist thereafter, like so many units of the retreating Grand Armee. The Battalion was restored by conscription in 1813, and was again attached to Imperial headquarters; it saw fighting on the last day of the Battle of Leipzig. During the retreat from that battle, many of the men became ill, and the unit effectively ceased to exist, taking no organized part in the 1814 campaign. The remaining officers and men, less than 100, were officially disbanded in June of that year.

The uniforms of the Battalion du Prince de Neufchatel were designed by Berthier himself. Reportedly a relatively ugly man himself, Berthier's personal staff were known throughout the army for the magnificence of their costume, rivaling those of Murat's staff. It is perhaps not surprising that he chose to clothe his personal unit in a very distinctive fashion, being unique in the army for wearing yellow ("chamois") coats. As one might imagine, this occasioned a fair amount of heckling, the Swiss calling them "canaries", the French "serins" (birds), and the Spanish populace "amarillos", "pasidos", or "canarios". The silver buttons were inscribed "Battalion Neufchatel" in the center, with a laurel wreath below and the words "Empire Francais" above. There is once again good information about the Battalion at the Histofig site; the bulk of the information in this post is from Dempsey's book, "Napoleon's Mercenaries", previously reviewed here. 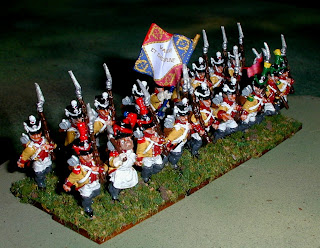 Here are "the canaries" in all their flashy glory! The exact shade of yellow used for the coats is uncertain; I used Delta Ceramcoat "Pale Straw" as the color, but probably anything from buff to light orange might be reasonable. 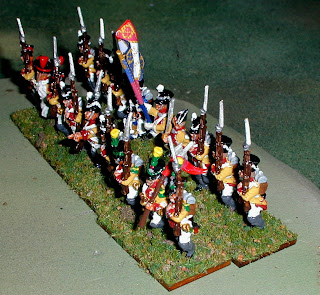 The unit was organized the same as a standard French Light Infantry unit, with 4 companies of chasseurs, one of carabiniers, and one of voltigeurs; the chasseurs evidently all had white pom poms and epaulets. Although I have them in shakos here, evidently bearskins (with red cords) were generally worn by the carabiniers of the Battalion, even in 1812
. 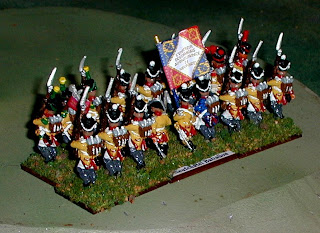 It is recorded that the unit was given "a small flag of Tricolor serge, inscribed on both sides with "Battalion du Prince de Neufchatel" on both sides "while it was waiting to receive 'one just like that issued to units with Eagles". It is unknown if such a flag was ever received, and if so, the details of its design. I have chosen to give my own "canaries' a standard pre 1812 French pattern standard, inscribed as above on the front. It is noted that the commander of the Battalion had crossed Marshal's batons in silver as turnback ornaments; I therefore chose to place crossed batons within the laurel wreaths of  my Neufchatel Battalion's flag (modified from Napflag). 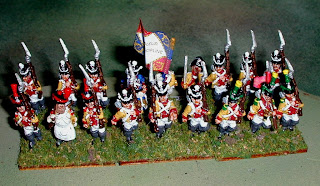 The dilute "magic wash" worked especially nicely on these uniforms to bring out the details without dulling the colors. Quite the classy unit! I made the red of their facings comparatively dark to contrast better with the yellow uniform coats. 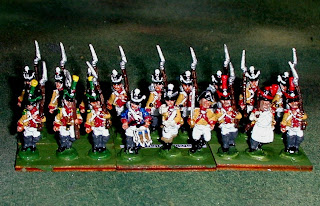 The Neufchatel Battalion before flocking and the magic wash; the drummer's dress is based upon the plate at the Histofig site. These are 28mm Sash and Saber French line infantry  figures once again... soon to be lighting up a battlefield near you!
Peter
Posted by Gonsalvo at 6:28 PM