As part of the provisions of the Treaty of Vienna in 1809, the territories of six of the former Grenz regiments of the Austrian Empire were transferred to the French Empire. These units were rechristened as the Chasseurs Illyriens in October 1809. With the approach of the planned invasion of Russia in 1812, Napoleon sought some way to make use of this manpower. Beacause of their border defense duties, entire units could not be safely removed from their districts. Thus the Regiments Provisores Croates, or Provisional Croatian Regiments were formed in 1811. Four regiments were ultimately ordered, but only three were ever formed, the 3rd in sequence being the first actually organized.

The First regiment was formed in October, 1811, and saw action in 1812 at Ostrowno, light combat at Borodino, and led the 4th Corps in action at Maloyaroslavets. They fought again at Krasnoi and the Berezina. In 1813 battalions of this unit were part of the garrisons of Glogau and Magdebourg (where it took part in the battle of Hagelsburg in August, 1813).

The Second regiment wasn't formed until February, 1813, and saw action at Bautzen as part of Bertrand's corps.

The Third regiment was formed in September, 1811. It participated in the invasion of Russia as part of Oudinot's 2nd Corps, and were brigaded with the Swiss regiments. They fought well at the first and 2nd battles of Polotsk, and the crossing of the Beresina. Remnants of the regiment served in garrison duty in 1813.

Uniforms:  The uniforms of their parent units were in a state of flux, and when Napoleon reviewed the 3rd Provisional regiment in Paris in December, 1813, "he was displeased with their appearance", and ordered a new uniform of "light infantry style" with a green jacket and pants, white metal buttons, white vest, and crimson facings. The tailors of the Guard were given the task of fabricating the new uniforms! Details of the other regiments dress are less certain, but is seems likely they were also green. Primary sources record green uniforms with *yellow* facings as well. (This information form Dempsey's book, previously reviewed). There is very useful information and plates at the Histofig site as well. It is very likely that the 1st and 3rd regiments at least received eagles and flags, most likely in the 1812 pattern.

I chose to do my small unit of Croats, once again needed for our 1812 project for Borodino and Maloyaroslavets, with yellow facings. This is what is shown on Histofig, and recorded in eyewitness accounts.... but mostly I chose it because I thought the yellow facings were more striking and unique than the crimson! The white gaiters are quite spiffy looking as well, I think. 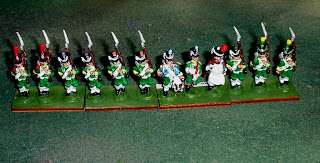 This is the same view before the "Magic Wash"; the effect is subtle but noticeable, I think. 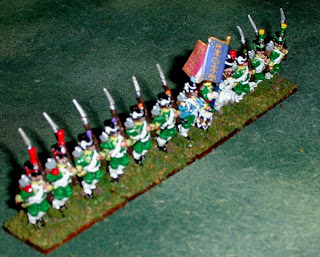 Slightly out of focus;  the company distinctions were as per standard French practice. These are spare 28mm (French) Sash and Saber figures once again. 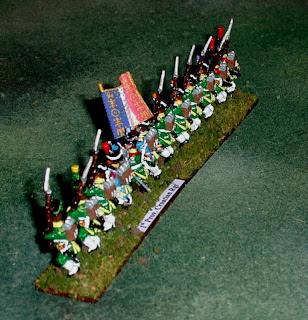 The turquoise blue jackets of the drummer and Sapper are taken form the plate on the Histofig site. The Green epaulettes of the voltigeurs are relatively inconspicuous on the green coats, aren't they? 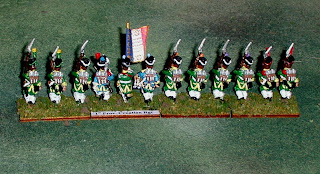 A good view of the rear of the uniforms. The 1812 pattern flag is from Warflag/Napflag, with the inscription modified in MSPaint to read "au Regt Provisore Croates". There would be no battle honors on it, although doubtless some of the soldiers fought at Wagram... except for the other side!

Consider adding this or one of the many other colorful "foreign" units in French service to your French Napoleonic wargames army!

Peter
Posted by Gonsalvo at 7:40 AM