Dave M. ran this game at Historicon on Thursday AM, pitting Orcs vs. Elves using Eric's 15mm Fantasy armies and my own Hostile Realms rules (from Piquet, Inc). I played in the first session, Barry in the second.  I'm afraid I'm not terribly good at taking pics of 15mm figures; I'll share some excellent ones by Gabriel at the end! 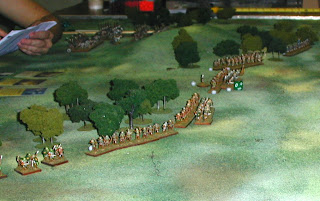 So if you're Elves on the defensive, what could be better than to set up defending some woods?  (Elves get special bonuses in Woods in HR). 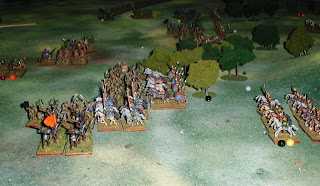 The Elves stationed a powerful wing of Cavalry and Chariots on their left flank, lead by a sorceress mounted on a Unicorn! 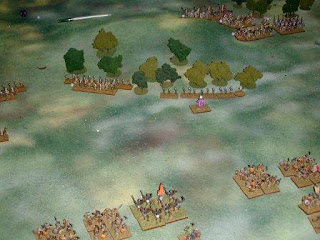 This is early on in the game; An Orc Heroic Moment card was used to throw a butt ugly but very tough Orcish champion into the line of Elves in this woods; how he planned on shrugging off the inevitable hail of Elvish arrows I have no idea, but he actually did survive the charge, helped by his Expert Constitution (4 hits to wound instead of the usual three)! 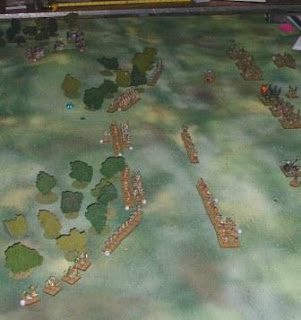 The Champion was repulsed  in Melee with one wound, but he had drawn the fire of the Elves... if the Orcs could charge before the Elves could "Reload", it could get ugly... and I'm not just talking about Orcish looks! 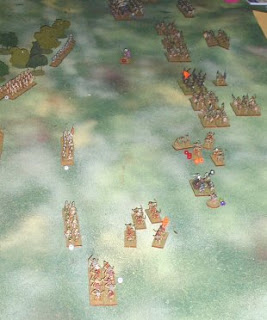 My own command consisted of some incompetent slave archers, a nearly useful stone thrower engine, and a pretty good wizard. I got a favorable card draw, and against my better judgement, tried the Level II spell, "Call the Storm"; if successful, this spell would greatly reduce the effectiveness of the Elves' missile weapons, which would all but spell their doom. When I let the spell loose, I rolled a "1".  Flarp! A Casting catastrophe ensued, and my Wizard became catatonic, and the rest of my boys went Out of Command for the rest of the game; that was pretty much it for me aside from taking casualties! I *knew* I should have stuck with a nice, safe, "Fireball" spell! Wouldda singed the ears right off them tree lovers! 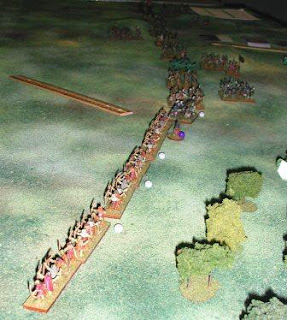 As it turned out, the attack of the Orc infantry then stalled for a while, and that allowed the Elves to pour fire into them when they got the precious reload cards. 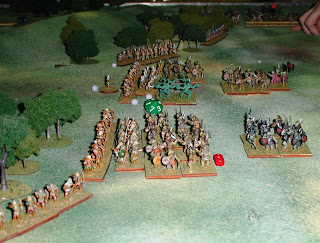 However, sooner or later the butcher's bill must be paid; Regenerating Trolls, tough Ogres, etc are bolstering the attack of the ordinary (but still tough in melee) Orc hordes. 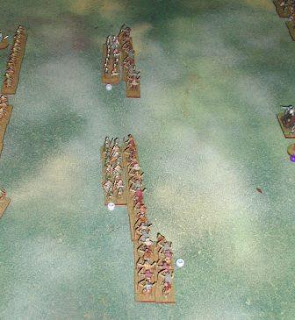 The Orcs had terrible dice in melee, and only managed to rout a single unit of Elves. Phooey! 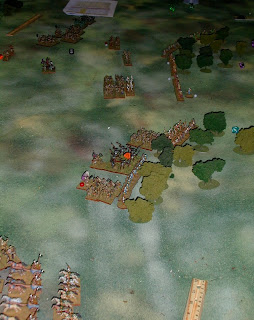 The wounded Orc Champion leads yet another charge on the woods. 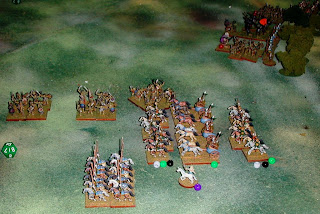 Some Orc warbands threaten the flank of the Elvish mounted troops! 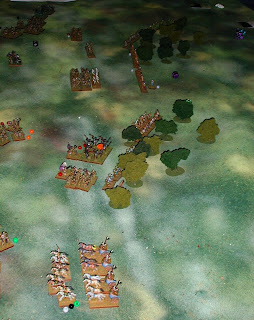 Curses! Foiled again- the Orcish attack is forced back! 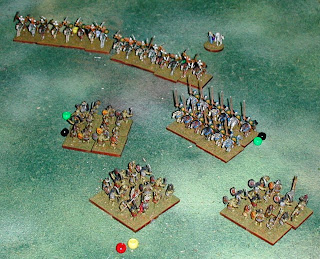 On the flank, a timely Elvish MOVE and maneuver rescues most of their Cavalry from danger. Shortly thereafter, the Orcs ran out of Morale Points and failed their Army Morale check, withdrawing back to the wildlands to lick their wounds... and plot for revenge!
As my character was in a Persistent Catatonic State for most of the battle, I had plenty of time to talk with Greg S. about Hostile Realms and its use for Historical battles from Ancient times through the Renaissance. Greg is a great guy, and is now allegedly planning on running Malplaquet at Historicon 2013, using 6mm figures and either Piquet: Cartouche 2nd edition, or Field of Battle.
After the poor showing by the Orcs, which took barely an hour, Dave set it up again, and a fresh set of players had at it; Barry has a short report of that game (and better pictures) on his blog at:
http://barrysredoubt.blogspot.com/2012/07/historicon-2012-part-1.html
Gabriel was one of the Orc players in that second game; to show you that my pictures don't do Eric's 15mm figures justice, here are some of his closeups from his blog at:
http://bellulula.blogspot.com/2012/07/piqetfield-of-battlehostile-realms.html 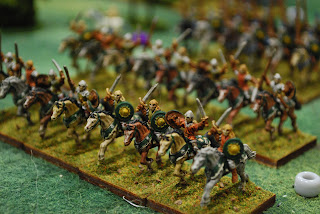 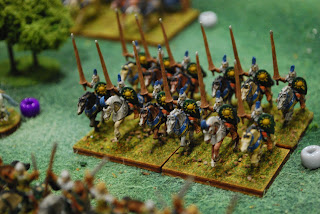 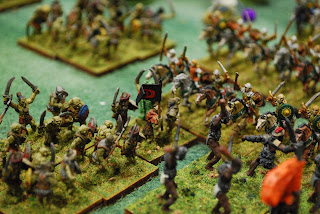