Bavarian Infantry of the Napoleonic Wars

I don't know about the rest of you, but when it comes to the armies of the minor states involved in the Napoleonic wars. the Bavarians always come first to my mind. They fought in many of the battles, and their "cornflower" (medium) blue coats and raupenhelms (dating from 1799) are particularly distinctive. They were the first allies I added to my French Napoleonic army way back in the 1970's, and it was the Foundry figures depicted below that finally made me take the plunge and replace my veteran Scruby figures wholesale in the mid 1990's.

Maximillian Joseph, Elector (Kurfurst) of Bavaria from 1799, allied himself with France and Napoleon in 1805, and as a reward became King in late 1805. The Bavarians contributed the single largest contingent to the newly formed (1806) Confederation of the Rhine.  They played a particularly large role in the the 1809 campaign in Germany, fighting at Abensburg, Eggmuhl, Regensburg (Ratisbon), Neumarkt, Aspern-Essling, Wagram, and Znaim, as well as extensive (and unpopular) duty against the rebels in the Tyrol and the Voralberg.

In 1809, there were thirteen regiments of Line Infantry in the Bavarian army,  numbered 1-14 (with #12 being vacant):


ALL regiments had red turnbacks, and blue shoulder straps, piped red.
* The first (later renamed “Konig” in 1811) and second regiments had wide button hole tape in the button color as well, 7 bands on each lapel, 4 on each cuff, and 2 at the rear waist of the jacket.
# ? on the collar only 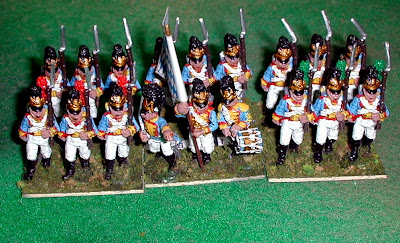 First up is IR #8, "Herzog Pius". this regiment has "sulfur yellow" collar, lapels and cuffs, all piped in red. Its buttons were yellow metal, so the lace chevrons on the drummer's coat are yellow,, and the wings are in the facing color, here also yellow, which also bore the crest of Bavaria embroidered upon them (and no, I haven't even tried to paint THAT on the figures!). 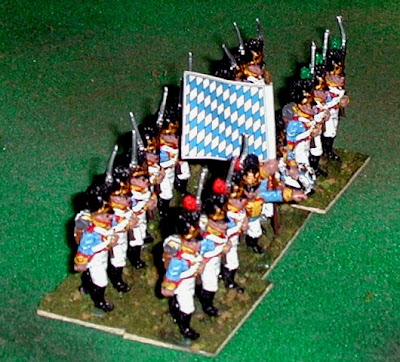 I am using my standard six stands per unit organization, and thus the Grenadier company has red plumes, and the Schutzen company green plumes on their raupenhelms. 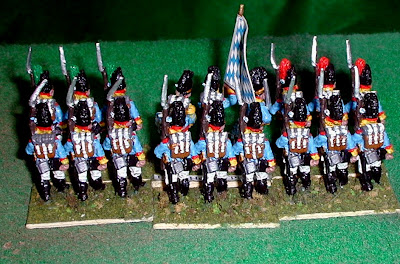 Although hard to see here, like all the line regiments, the turnbacks on the jackets are red. 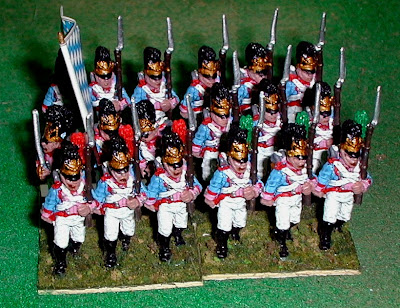 The next unit is I.R. #5, "von Preysing". This regiment has pink collars, cuffs, and lapels piped in red, with white metal buttons. 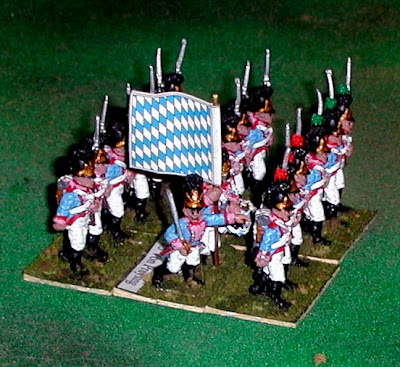 This picture shows the 1803 pattern of the Ordinarfahnen, namely an overall pattern of white and light blue diamonds (rhombi), already associated with Bavaria in heraldry for centuries. It was re-issued again in 1813. 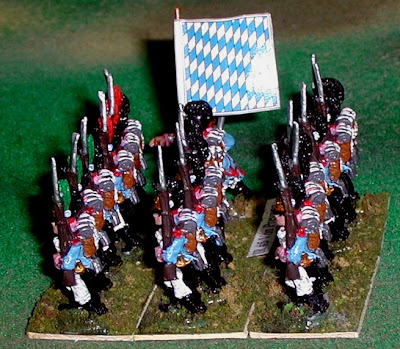 This picture shows the Bavarian cockade, light blue with a white center and rim. 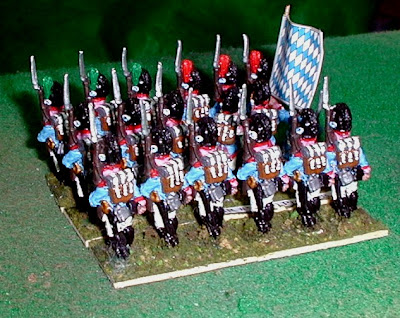 Company distinctions were worn on the raupenhelm above the cockade (not shown on my troops) in the form of wool tufts; 1st company white, 2nd white and yellow, 3rd company green, and 4th company green and yellow. To make things confusing, in the 2nd battalion, the plumes of the elite companies had white lower halves. When third battalions were raised in 1814, the company tufts were changed to solid colors for the first battalion: 1st company white, 2nd yellow, third blue, 4th green; the tufts of the second battalion had white lower halves, and for the 3rd battalions, the lower halves of the tufts as well as the plumes of the elite companies were black. 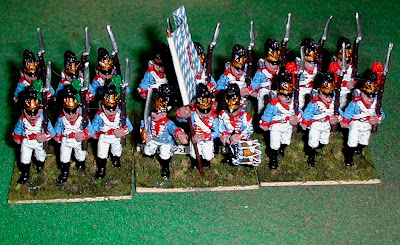 Here is IR #1, the Leib or later "Konig" (King's) regiment. It has the white lace tabs on the buttonholes. As this unit has white metal buttons, the lace chevrons and edging to the wings of the drummer's coat are all in white as well. 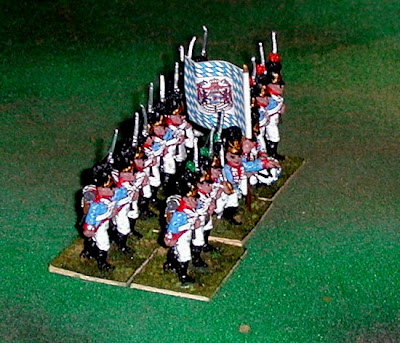 The design of the Leibfanhnen changed numerous times in the early years of the Revolutionary and Napoleonic wars, as territories were added and subtracted, necessitating changes to the central coat of arms. When the realm added Protestant districts in 1803, the Virgin Mary disappeared from the Leibfahnen as well. The elevation of Maximillian Joseph to King from Elector in 1806 required the electoral cap to be changed to a crown. In 1808, the central crest was simplified to just light blue and white rhombi, as seen here. 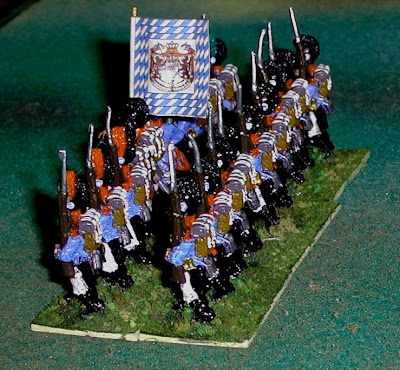 The central device of the 1808 pattern is seen better in this photo.

Here seen deployed in line is IR #11 "von Kinkel". They probably did seem a bit "kinky", as only this regiment had dark green facings for the lapels and cuffs (piped in red). White metal buttons. Note the blue and white striped patterns on the rims of the brass drum.

The rear view shows the light blue and silver sash of the officer better. This unit's flag has the central crest on a light blue field instead of a white one, a known variant.

Also in 1799, the Light Infantry adopted the Raupenhelm and the more traditional uniform cut from the earlier Rumford styles. The coats of the Light Infantry were initially light green, but changed to dark green in 1809. Unlike the Line infantry Regiments, which were named for their proprietor or "Inhaber", the Light Infantry battalions were named for their commander, which lead to very frequent name changes. All battalions had red turnbacks, white belts (Gill says black, probably an error as Funken, Knoetel, Hourtoulle, and von Pivka all say or show white belts), and grey breeches. The 5th and 6th battalions were added in 1803, and the 7th in 1808. The elite (Schutzen) companies had green plumes, with the Karabinier companies (added in 1811 according to Otto von Pivka in Osprey Men at Arms #106 dealing with Bavaria) wearing red plumes. 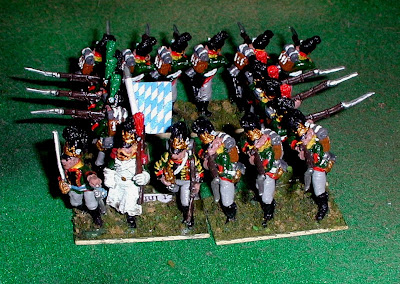 For my Light Infantry battalion, I chose #6, in 1809 titled "La Roche". This unit had "lemon yellow" collars, while the lapels and collarss were black piped in red; red turnbacks. 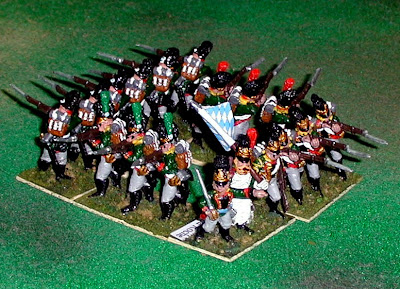 This view shows the officer's sash well. The hornist has yellow lace chevrons and edging to the wings, similar to that of the line drummers. I have given the sapper figure here a sort of unofficial Bavarian fanion to carry; the light infantry battalions did not have standards.

Late in the Napoleonic Wars (late 1813 to 1814), a number of new infantry formations were raised, including volunteer Jagers, a Grenadier Guard regiment, Garrison regiment, and Landwehr. The above cited Osprey has details of their uniforms for those interested in pitting their Bavarians against the French, instead of being allied with them. Roger, of our gaming group, has every unit in the entire Bavarian army in his collection!

Although it was way back in May 1974, while on tour with the University of Connecticut Marching Band, I was fortunate enough to visit Bavaria. Our trip started in Ingolstadt on the Danube. Unfortunately, our plane had been delayed in Boston by more than 12 hours, so by the time we arrived in Germany, we were all very jet lagged. Therefore, it wasn't until our last few hours there that I realized this city was the home of the Bavarian Army Museum! I made a mad dash there and had a whirlwind tour that lasted a little over an hour, where I could easily have spent a half a day or more there. Oh well! I did get to visit Regensburg (Ratisbon) and see the famous bridge there. When seen in person it is obvious why it could not be easily or completely demolished in 1809, a fact which allowed the Austrians to escape after the battle of Eckmuhl. After visiting Wurrtemburg (Freiberg), Switzerland (Lucern, Geneva, and Zurich), France (Lyon, Nice), Leichtenstein, and Austria (Feldkirch), we returned to Bavaria and spent our last 2 days in Munich. This of course entailed mandatory trips to the Marienplatz and the famous Hofbrau House.

As of this writing, it is pretty much right in the middle of Oktoberfest in Germany, which lasts 2 weeks. It starts in September and ends the first Sunday in October. The best known and most often heard of all German drinking songs, "Ein Prosit", is below. It is usually played by a brass (oompah) band every 15 minutes or so during the Festival.

"A toast, a toast, to the the warm spirit of comradeship" (and of being pleasantly buzzed, LOL!). So, a toast to all of my fellow wargamers and military history enthusiasts... although, sacrilege that it is, I'll make mine a nice dry Reisling, thanks. Ein, zwei, drei - Gusuffa!