My recent orders of Essex and Connoisseur figures needed for my Historicon games were rather small, so I added few extras to make the shipping charges seem more worthwhile. That resulted in some figures lingering on my painting desk, which I have no finished off. Here they are for your viewing pleasure! 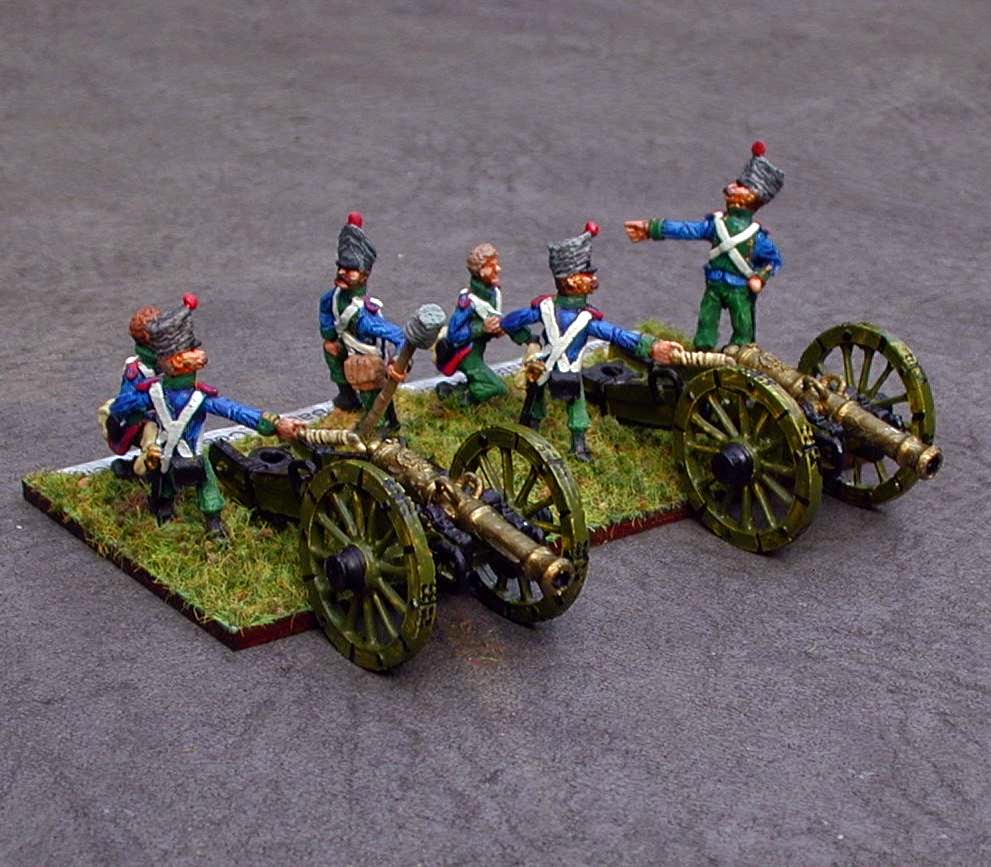 This battery is made using the Connoisseur figures. State of the art in their day, they aren't quite up to modern standards, but still have a charm of their own. They are also the only artillery figures I have that are wearing covered shakos. 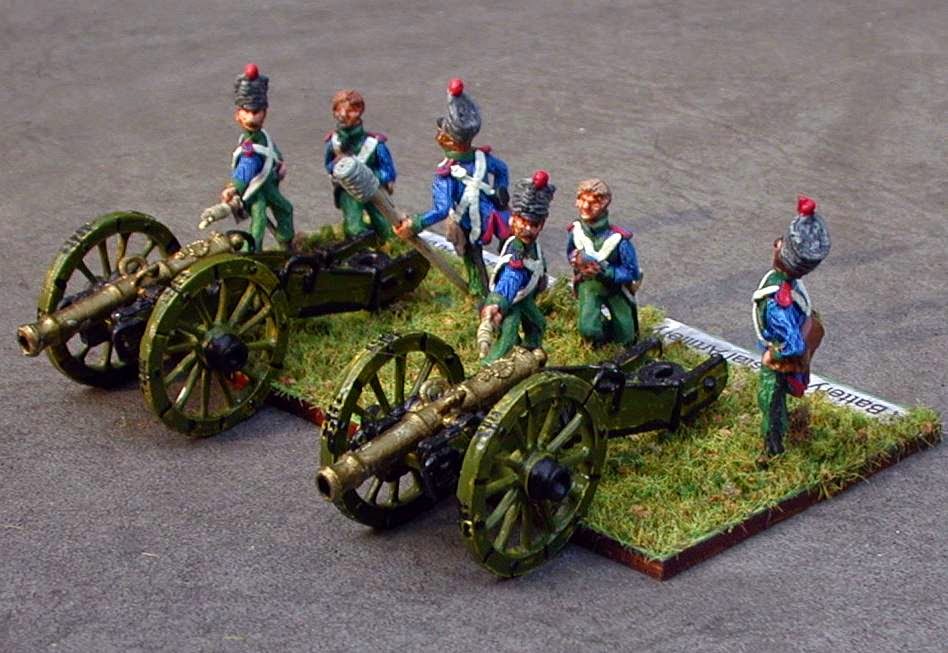 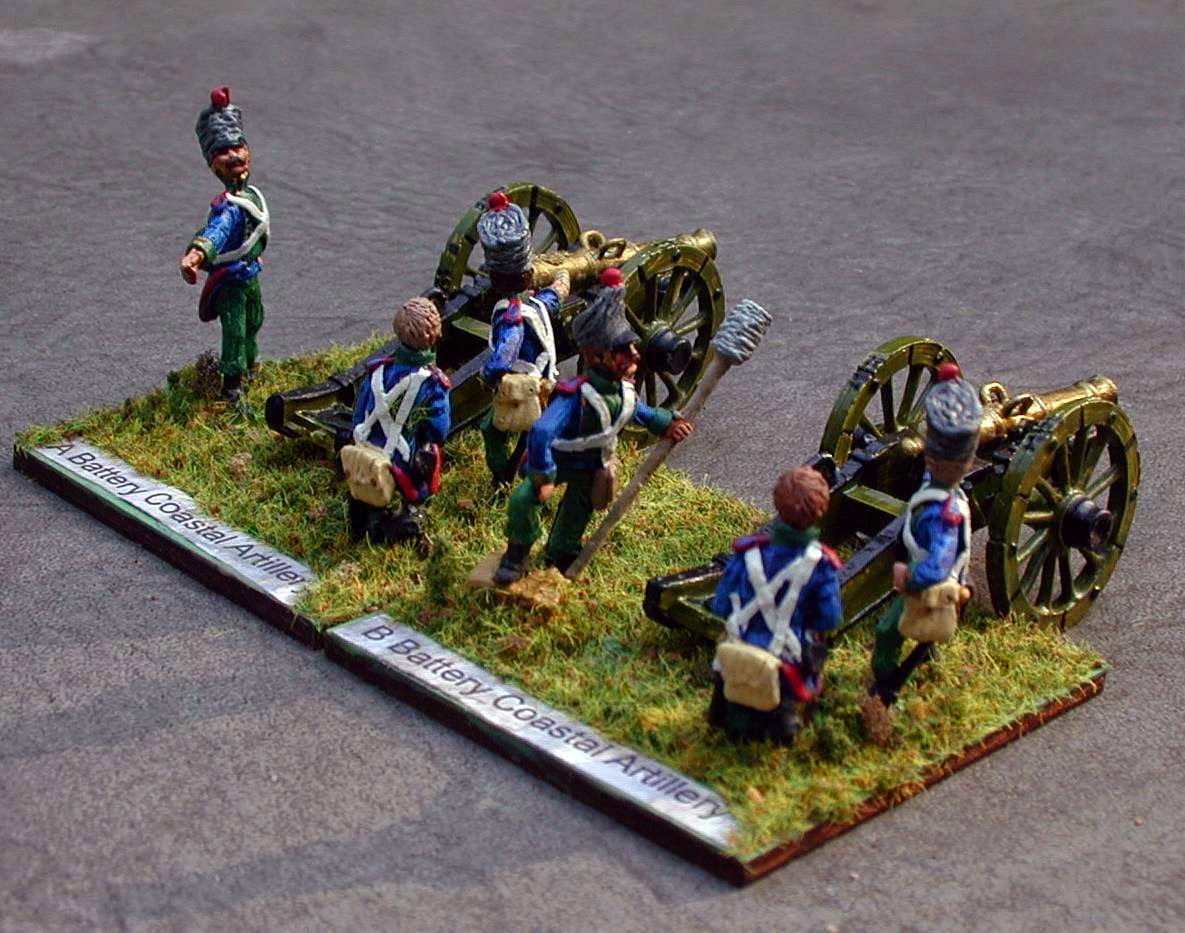 No, this unit is based upon an illustration in Fred and Liliane Funken's Arms and Uniforms of Soldiers of the First Empire. It depicts an artillerist of the Coastal Artillery in 1809. Presumably, these were the men that manned the guns of the many fortresses and batteries protecting French harbors from the scourge of the Royal Navy. I've found the wonderfully eccentric colors fascinating since I first acquired the books (French language versions) back circa 1970. I have no idea of the accuracy, and the illustration doesn't really show the turnbacks well, so I went with red (they look like they might just be white in the picture, which would be odd as well). The cuffs are also shown to be dark blue with medium green piping and cuff flaps, but I just went with solid green. In for a penny, in for a pound!  Anyway, I figure it is plausible some of these guys may have been pressed into service opposing the British invasion Walcheren in 1809, or in the later phases of the 1813 to 1814 campaigns. Unfortunately, the same plate shows another coastal artilleryman from 1812, wearing a dark blue uniform with red piping etc like pretty much every other French Napoleonic artillery uniform! In any even, with their unusual uniform, they will serve as conscript/militia artillery, as well as a unit to baffle wargaming grognards with!  :-) 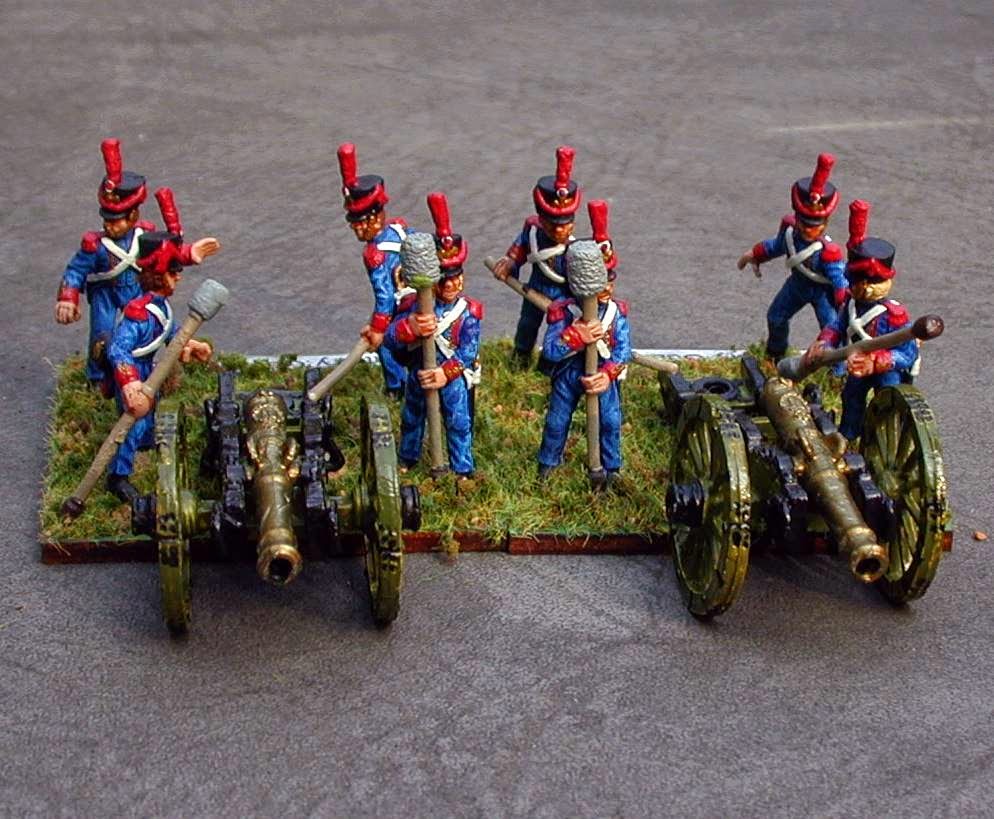 These are some excellent Essex artillerymen purchased with the clear-out discount at Wargames, Inc. They were piggybacked onto an order of some additional New Kingdom Egyptians for Ramses' army. 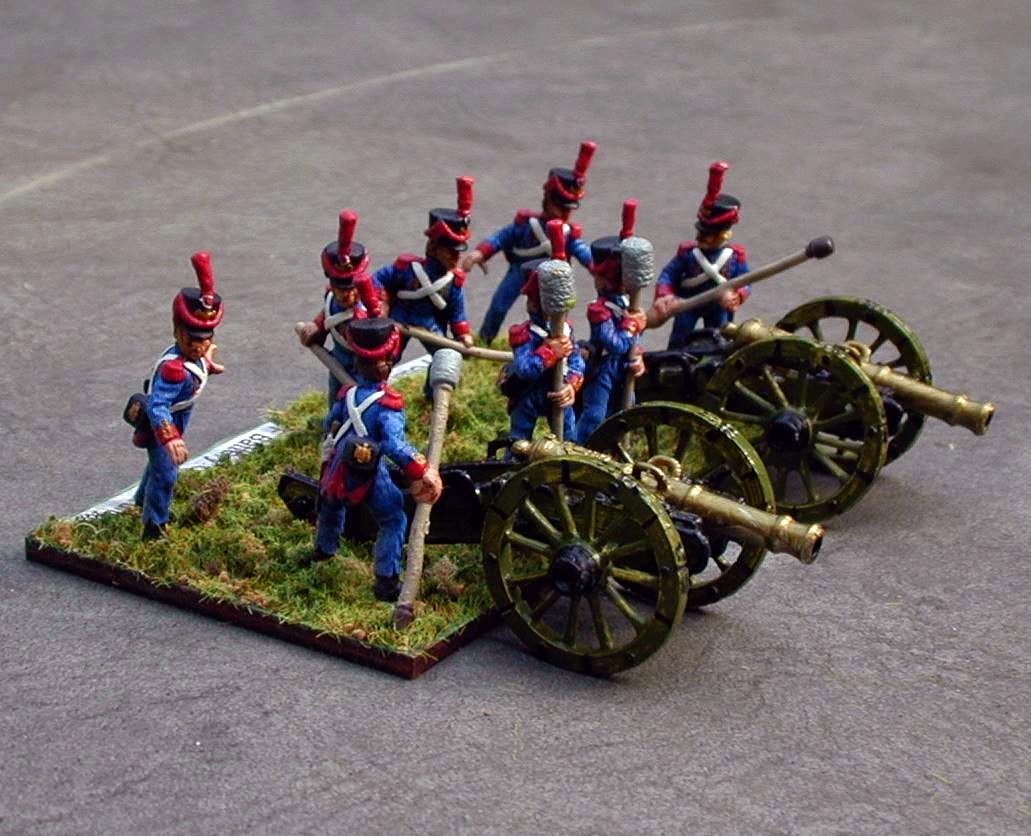 They are the Artillerie a Pied de la Garde Imperiale. The Foot Artillery of the Guard was a relatively late addition, six companies being formed by a decree in April, 1808, and belonging to the Old Guard. Three companies of Young Guard Artillery (or Concrit Artillerie) were added in June 1809. By 1813, the Young Guard component had increased to 16 companies! 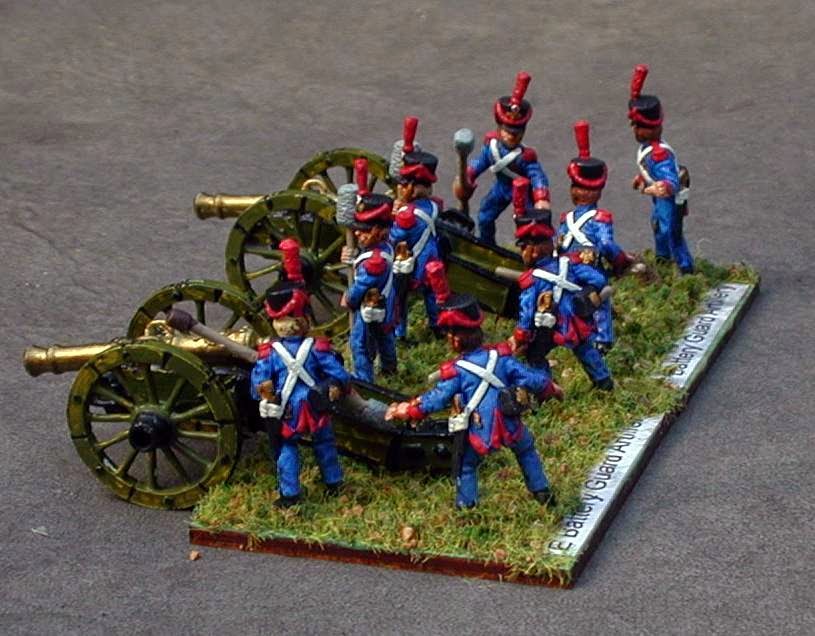 The shako was worn until the introduction of the better known bearskin headdress (Old Guard companies only) in 1810, so these troops are wearing the earlier uniform. Guard insignia include the brass eagle plates on the shakos and cartridge boxes. Both are nicely sculpted on these figures. The guns of both batteries are Sash and Saber 12 lbers. 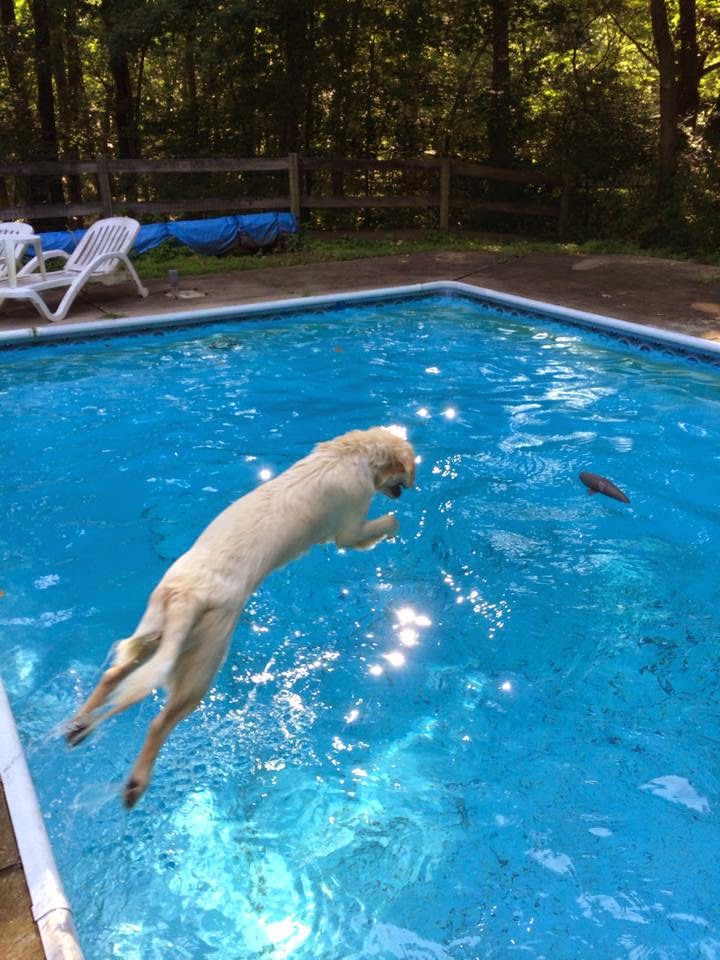 Canine Corps - Annie scores bonus points for height with her jump to get the "shark" in the pool. 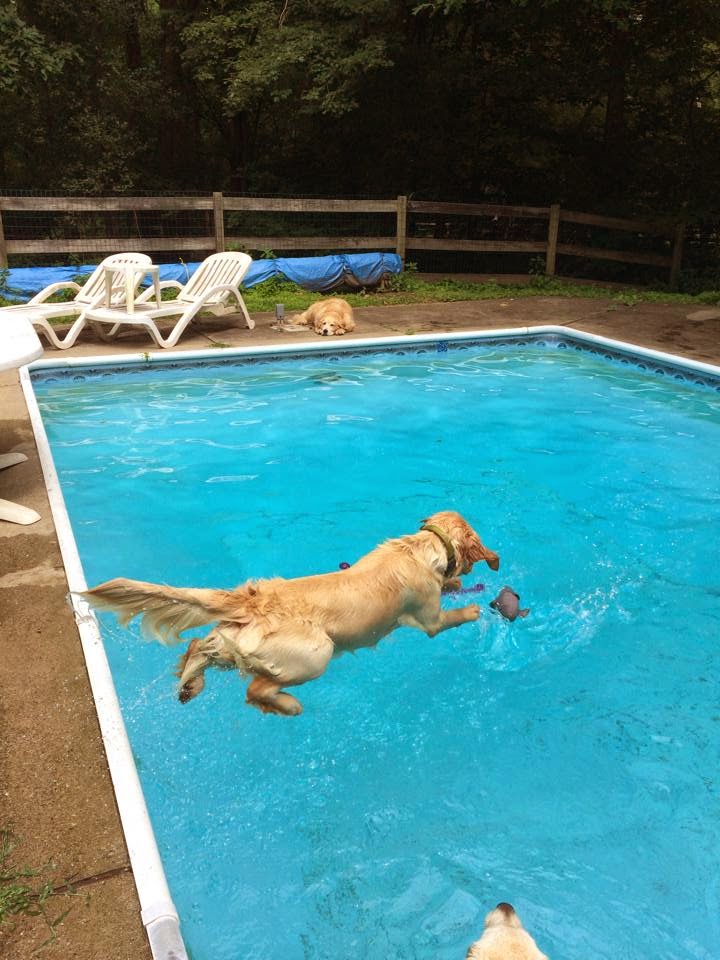 Whilst Zoe score points for distance and accuracy! "You're going DOWN Sharkie!"
(Piper, 10 years old, looks on from a distance, seemingly unimpressed. She's OK with some swimming, but doesn't jump into the water, which was her late half sister, Cricket's,  obsession!) 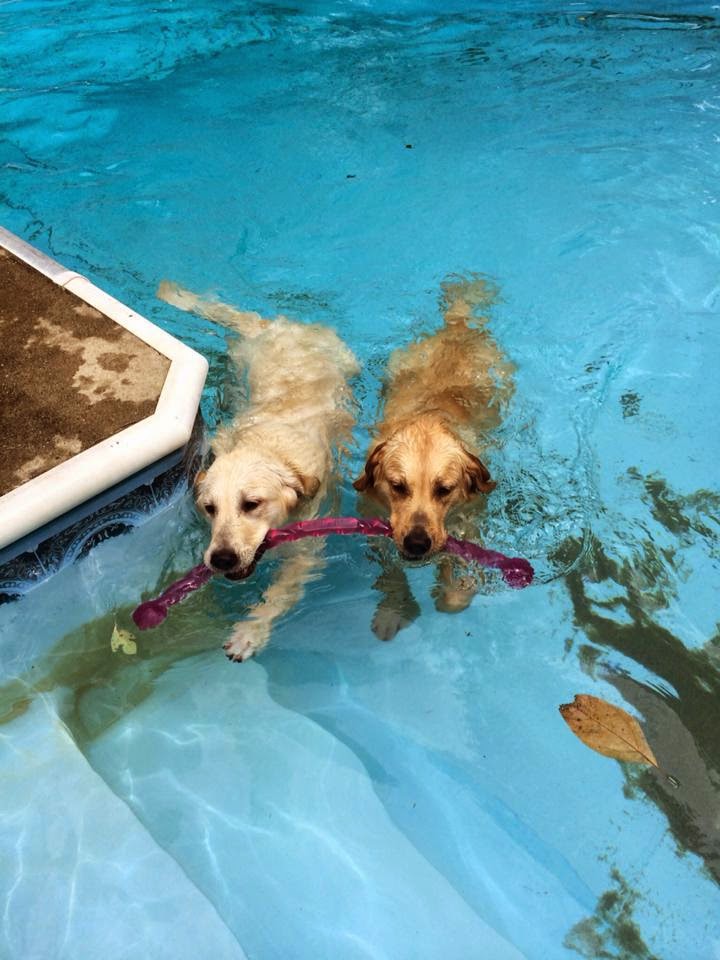 "I got it first.... No, I got it first!"
They aren't called Golden Retrievers for nothing!
Posted by Gonsalvo at 10:37 PM