The Hussars were the first light cavalry of the Horse and Musket era in Europe, and as the originals, the Austrian (or more properly, Hungarian) Hussars set the model for all of the rest. The origin of the term is uncertain, but the most commonly accepted explanation is that was derived from a Hungarian word meaning "one in twenty", as selected for military service by lot. As such, non uniformed Hungarian Hussars dated back to at least the early Renaissance era. In the Holy Roman Empire (and later Austro-Hungarian Empire following the dissolution of the HRE in 1806), the Hussars were recruited exclusively from the "Hungarian" territories of the empire.

Characteristic features of Hussar dress include the dolman, a tight fitting, extensively laced upper garment, and the pelisse, a heavily braided and fur lined jacket.  The pelisse could be worn over the dolman, or slung over the shoulder jauntily. Unlike the Hussars of most other nations, the dolman and pelisse of the Austrian Hussars were invariably the same color. Hussar dress also included tight fitting pants, usually also decorated with lace/braid, and tasseled boots. The Hussars also had a unique accouterment, the sabretache, a sort of small pouch which hung suspended from the waist belt by three straps, the front side of which was often highly decorated, especially for officers.  In the Austrian Hussars, the colors of the shako varied by the regiment, which really makes them stand out on the tabletop, and was different from  the usual practice for most other nations. Finally, Hussar dress usually included a barrel sash around the waist. In the Austrian Hussars, all regiments used the same black mixed with yellow (reflecting the colors of the ruling Hapsburg dynasty) for the barrels sashes as they did for the braiding on the rest of their uniforms, while alternating bands of contrasting colors was the norm for other hussars.


* like other Austrian regiments, the names of the hussar regiments were subject to change with changes of the Regiment's Inhaber.

Knoetel gives Kornblumenblau (Cornflower Blue) for the dolman, pelisse  and pants of regts # 6 and #12, and Ashgrau (Ash Grey)  as the color of the shakos of the 3rd regiment. Funken gives the same in French equivalents. Pike grey has a very decided blue color to it which ash grey dies not. "Parrot Green" has now been shown to have been a rather ugly, light greenish yellow color.  Evidently, units with light colored pelisses generally had black lambskin on them, while units with dark colored pelisses had brown lambskin, although the Osprey states that this was not invariable, and that white or fox fur linings were also used at times. 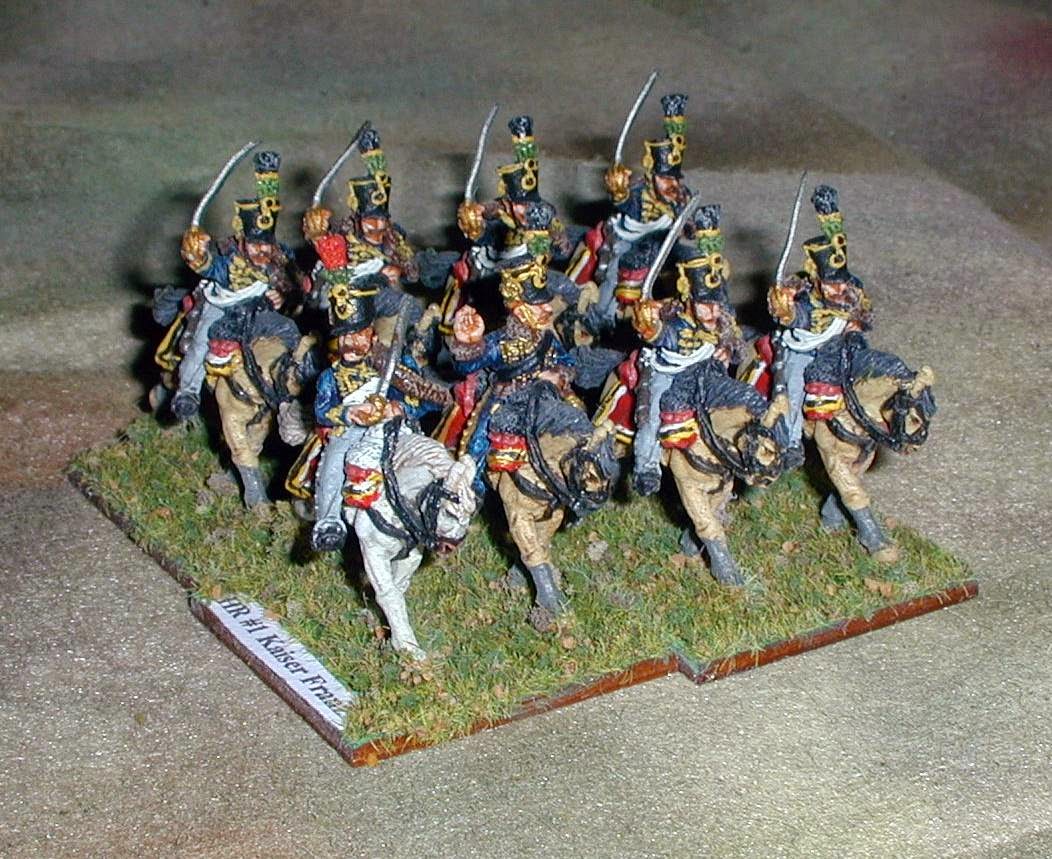 HR #1, Kaiser Franz. This unit has rather conventional black shakos, unlike most of the other Austrian Hussar regiments. 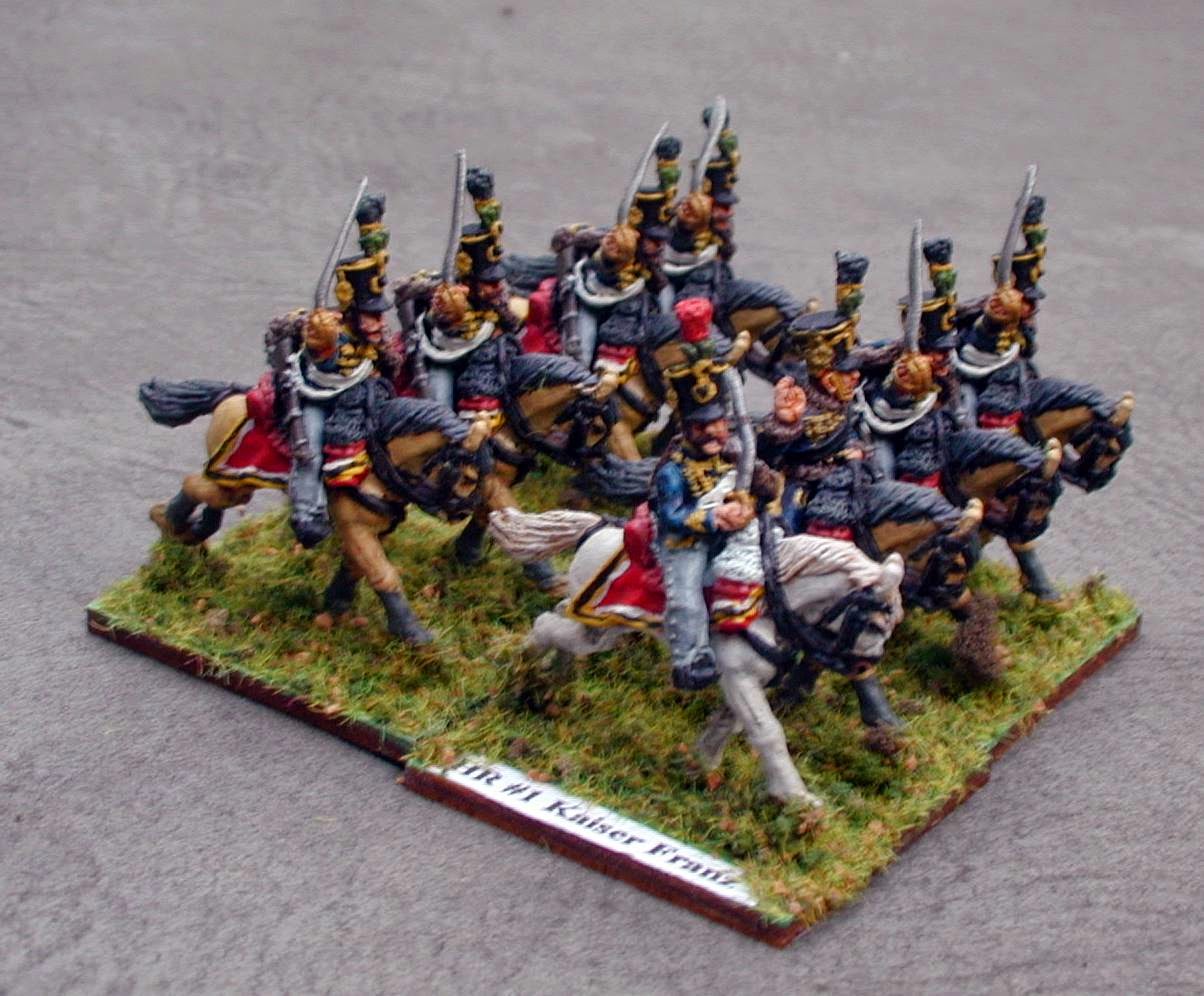 The sheepskin covered saddles worn over the shabraques were generally black for the Hussars, although white was not unknown. here I have given the Trumpeter white and the rest of the unit black. 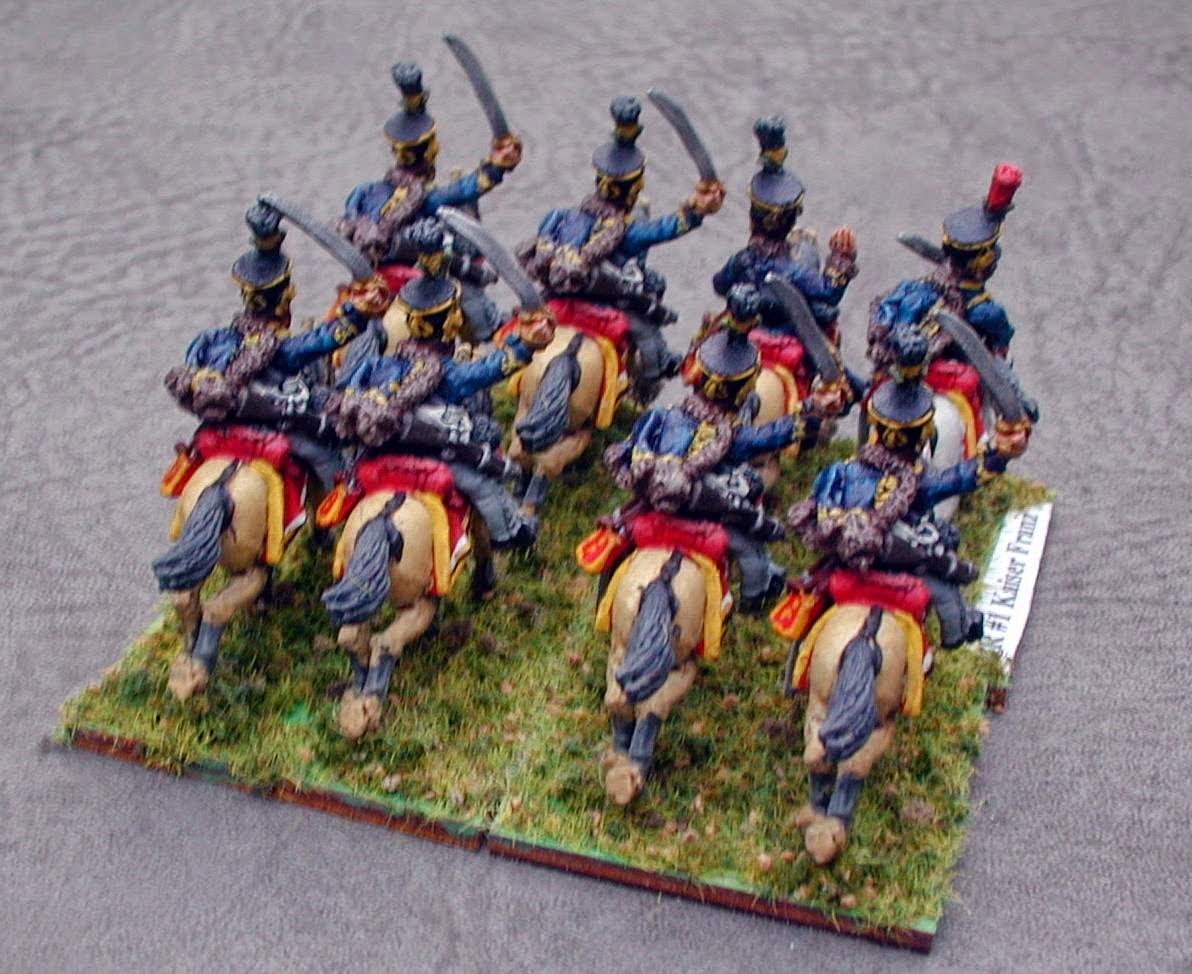 The valise carried at the back of the shabraque was red, generally without ornamentation. These Foundry figures were just finished this week. 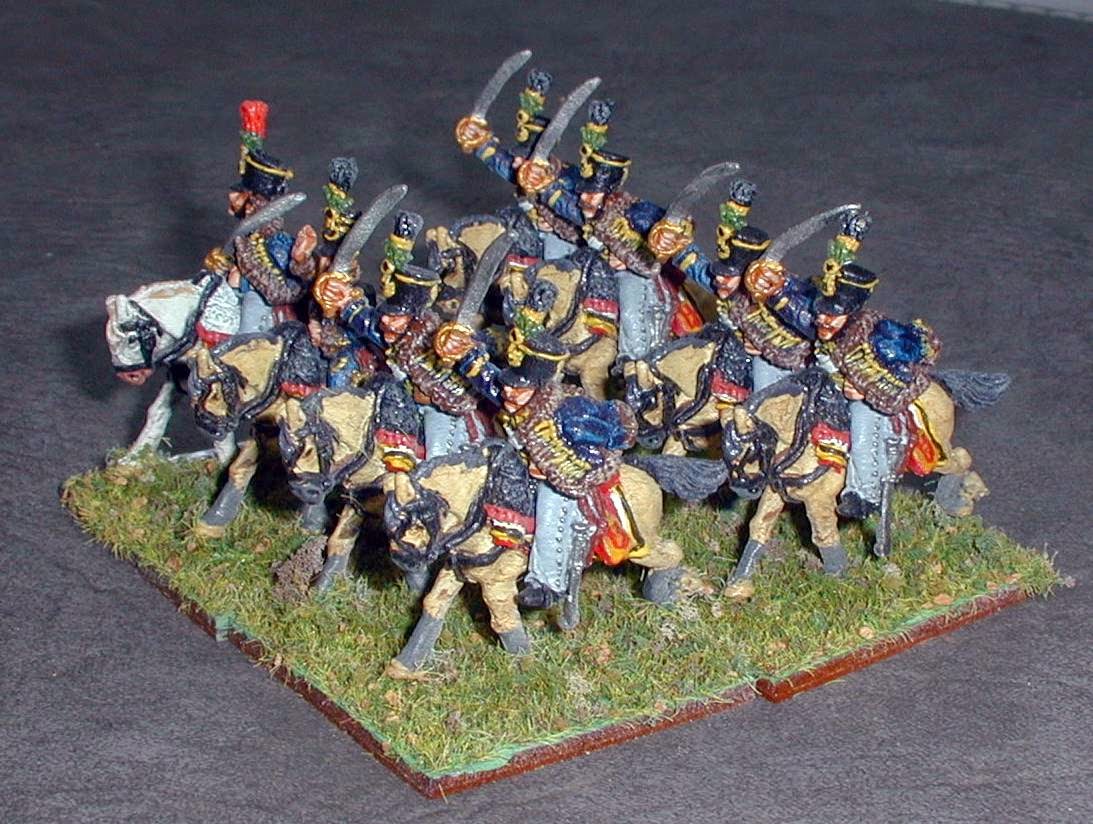 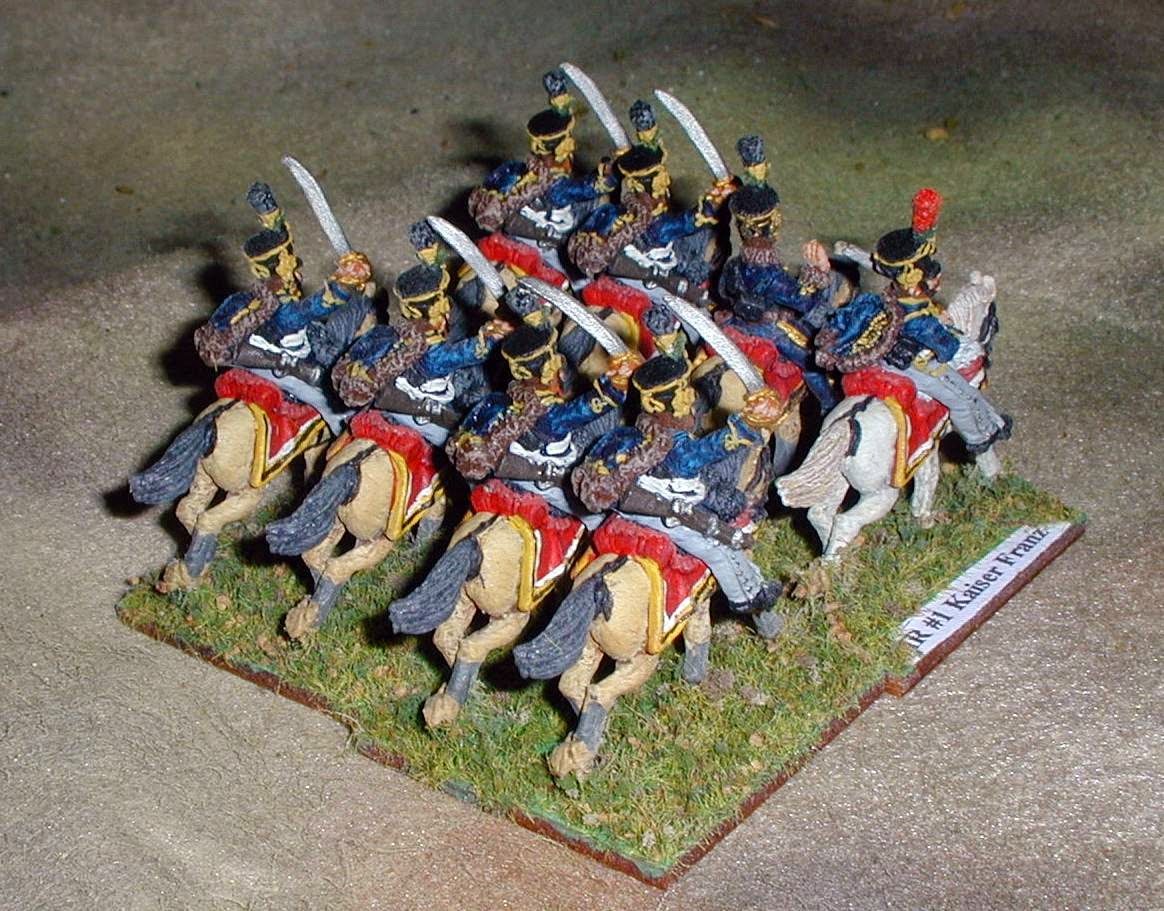 The border pattern of the Austrian shabraques is not easily painted - here I went for a broad yellow stripe (Valejo Deep Yellow), with a central black line, and an inner white stripe (should be white bordering the yellow on both edges, but that's more than my poor eyes could take!) 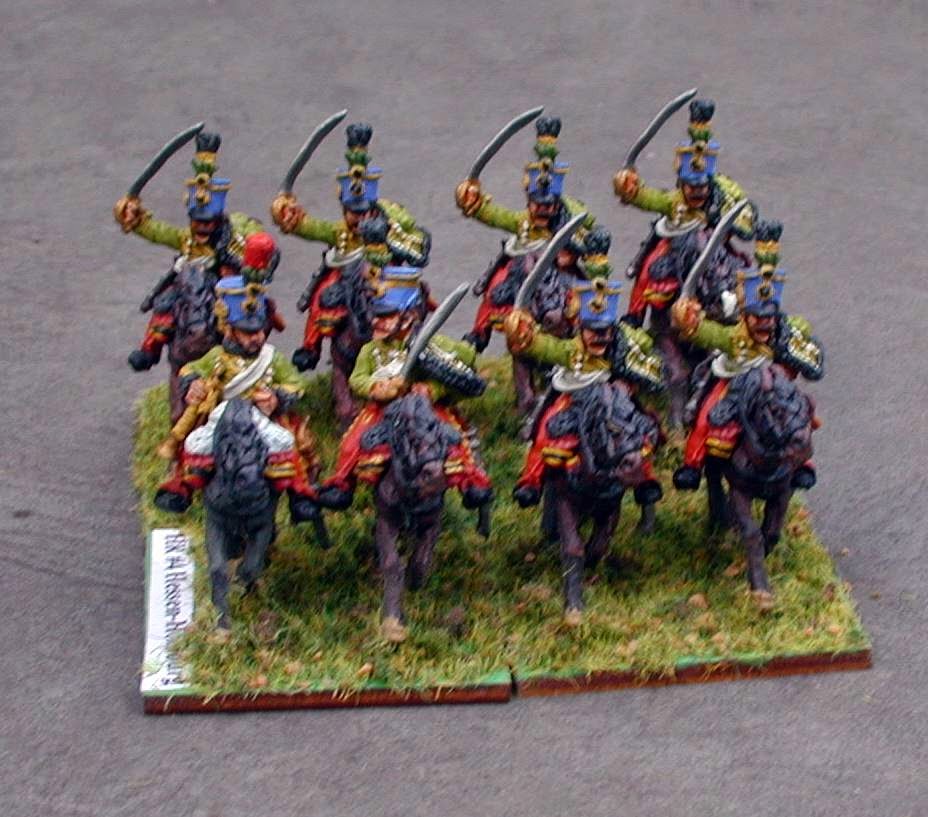 This is HR #4, Hessen-Homburg. Their bright blue shakos make a striking contrast to the somber black of HR #1! 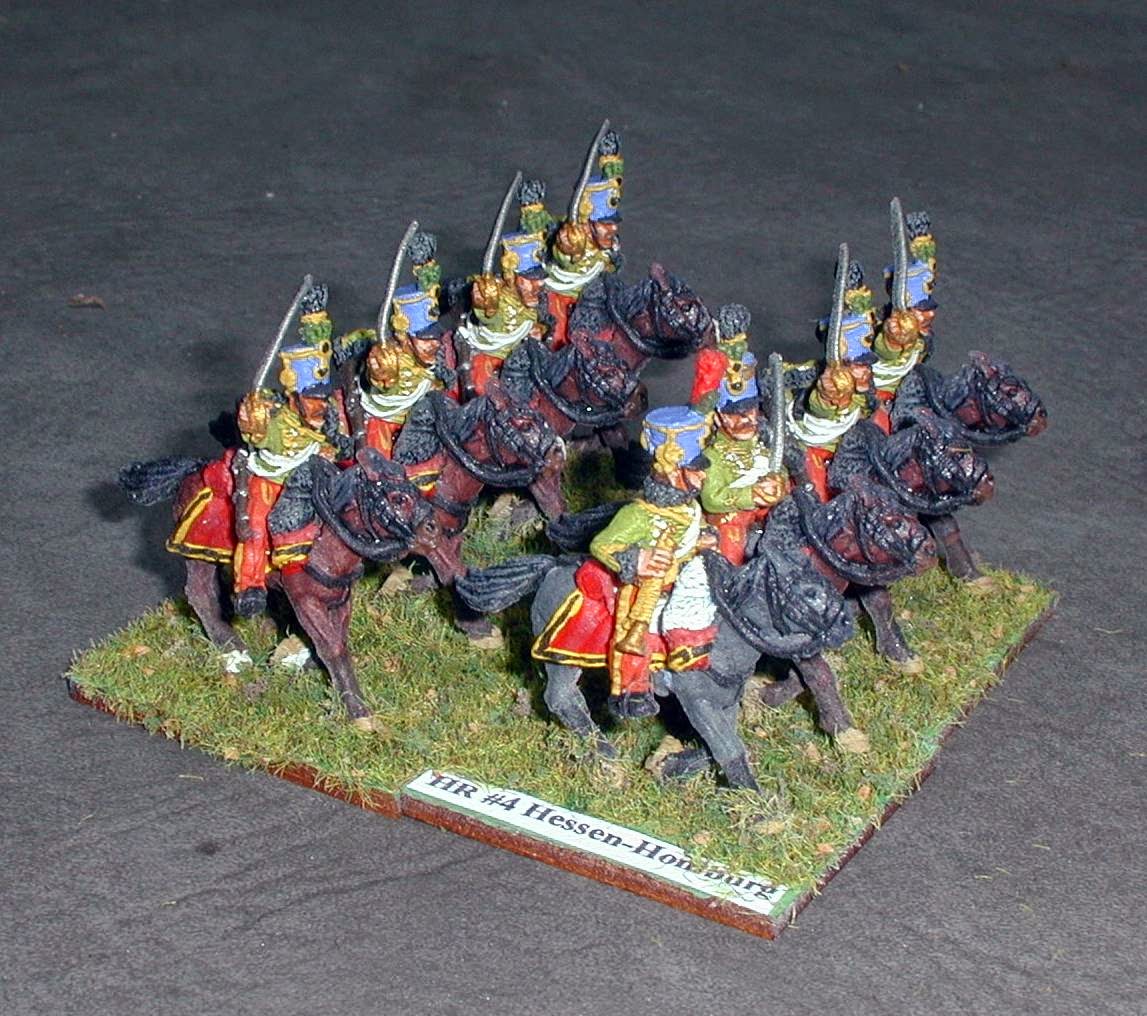 Like most other cavalry of German nations, the trumpeter is distinguished by the red plume on his shako, and very little else. The trumpet cords are the same yellow mixed with black as used on the pelisse, dolman, breeeches, and shako. 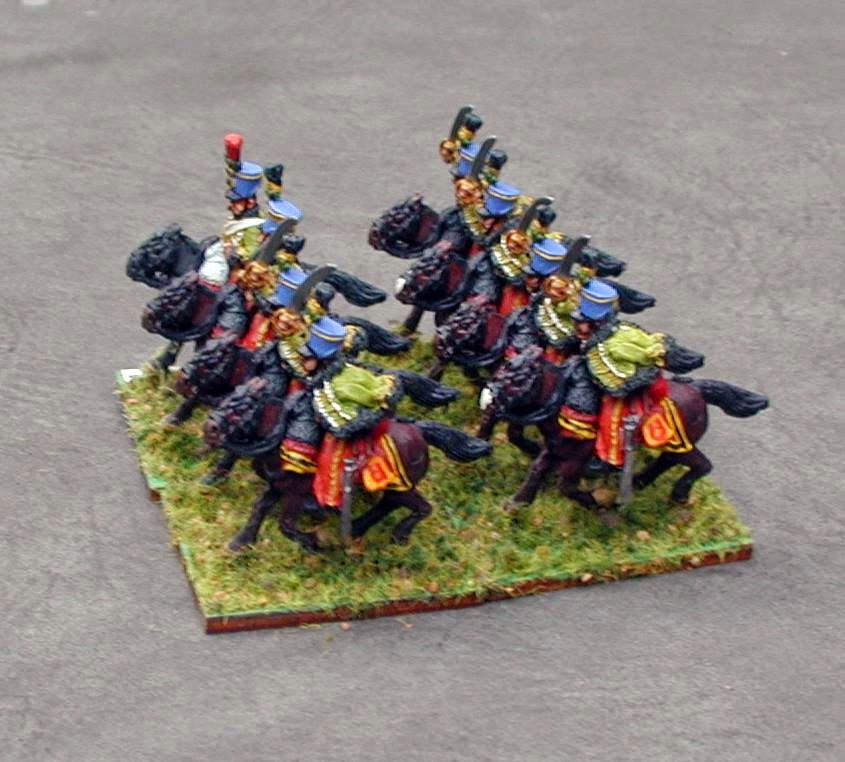 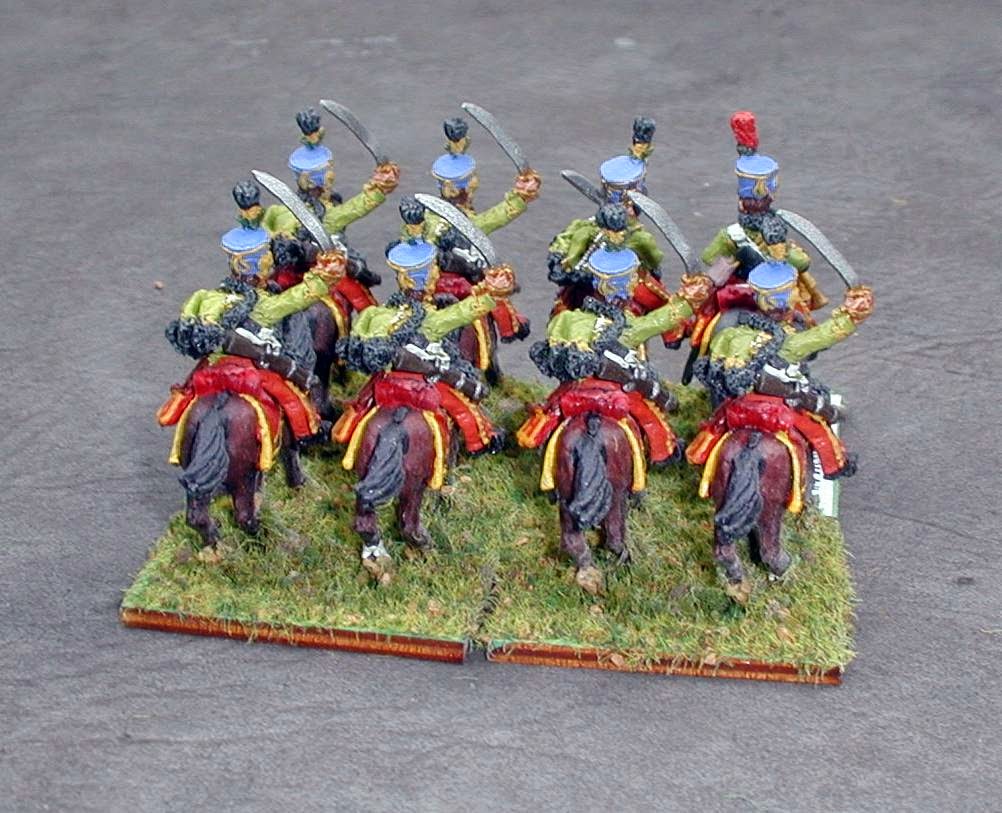 I could perhaps have used an even more yellow shade for the "parrot green" of the dolman and pelisse for this unit, but I couldn't bring myself to make the shade quite that ugly! 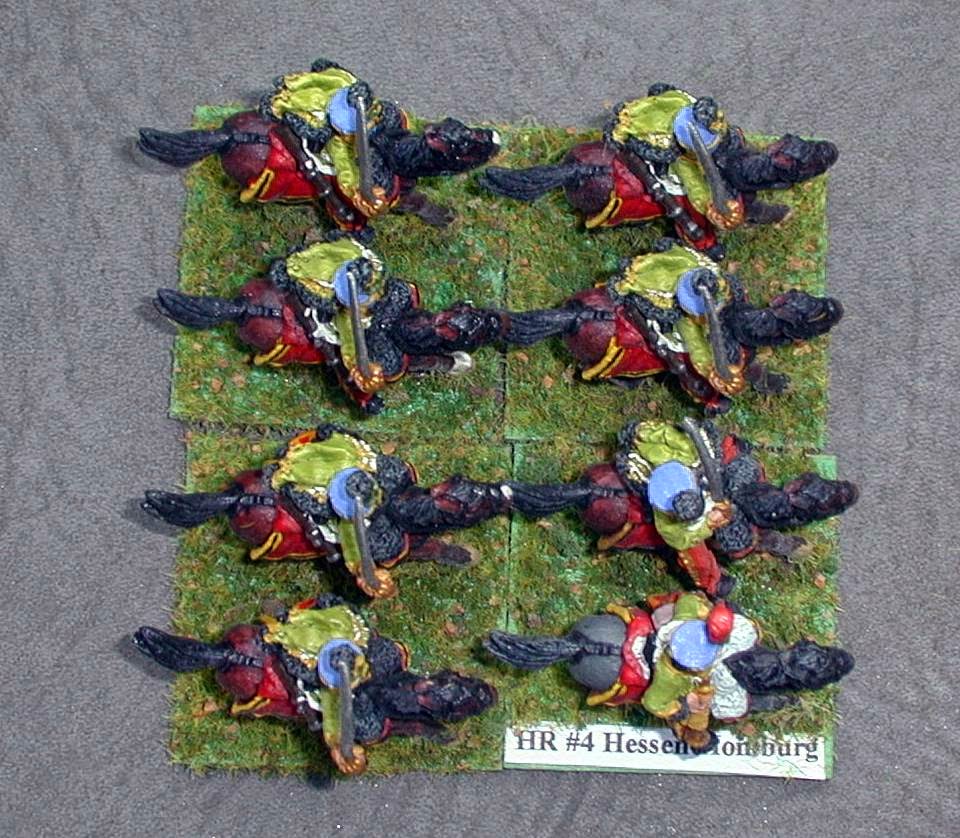 Top down view of HR #4.
These two units of Foundry Hussars just added to my painted collection are a consequence of attending Historicon 2012. While there, Joe and I were perusing the flea market one day, and came upon old friend, Freddie Avner, who was trying to offload some surplus lead there. Among the items on the table were the castings for a  28 figure regiment of Foundry Austrian Hussars with command. As seen here, the figures are very nice, but neither of us needed anywhere near that many hussars (we both field "regiments" of 8 figures, and there were not enough command figures as well). After a little calculating and finagling, we bough the whole lot from Freddie and split them between us, including the command figures, 14 each. If we each then purchased a pack of Foundry Austrian Hussar Command figures in the future, we'd each then have all the lead necessary for 2 new hussar  regiments; the spare hussar figure could be used as an aide on a command stand. It took a while, but the results are now before you! The Regiment in line - the officer has gold cords in place of the black mixed with yellow, as well as an extra gold band on the upper part of the shako. 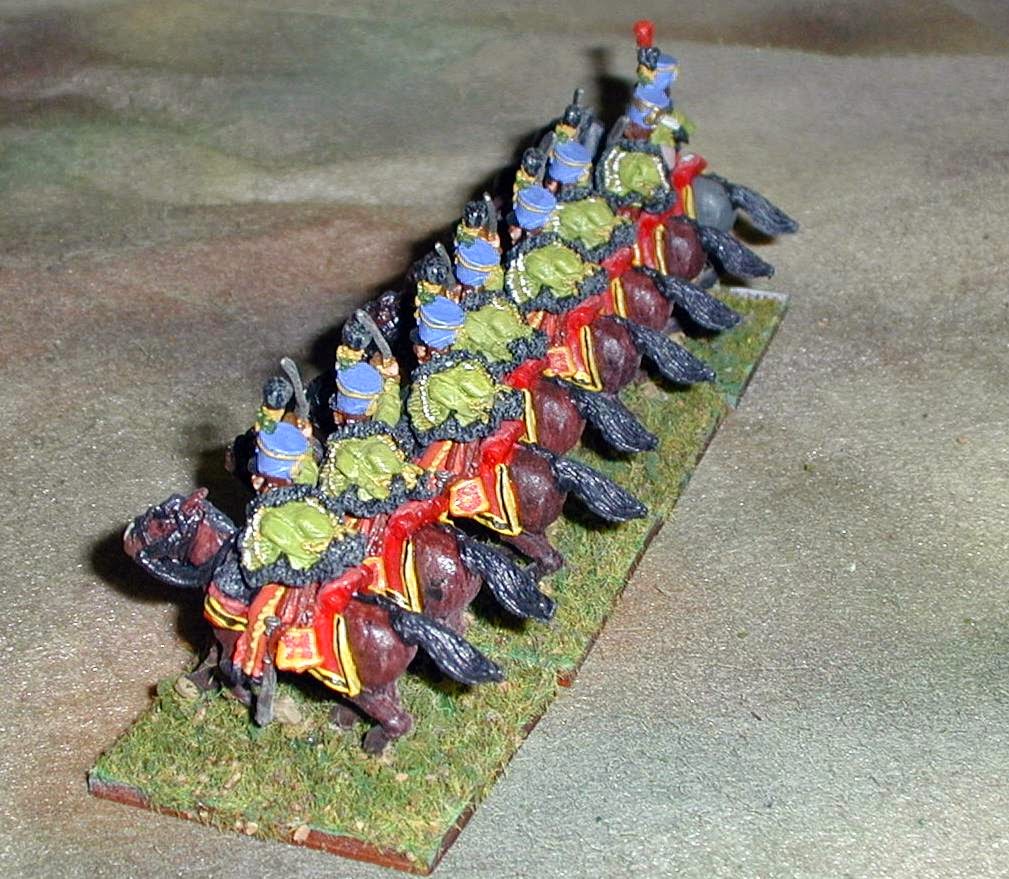 I went with a simpler shabraque edging for this unit, just a broad yellow stripe with a central black line within it. These are Foundry figures once again. As the Austrian Hussars didn't carry standards, Foundry doesn't even make a Hussar standard bearer figure. 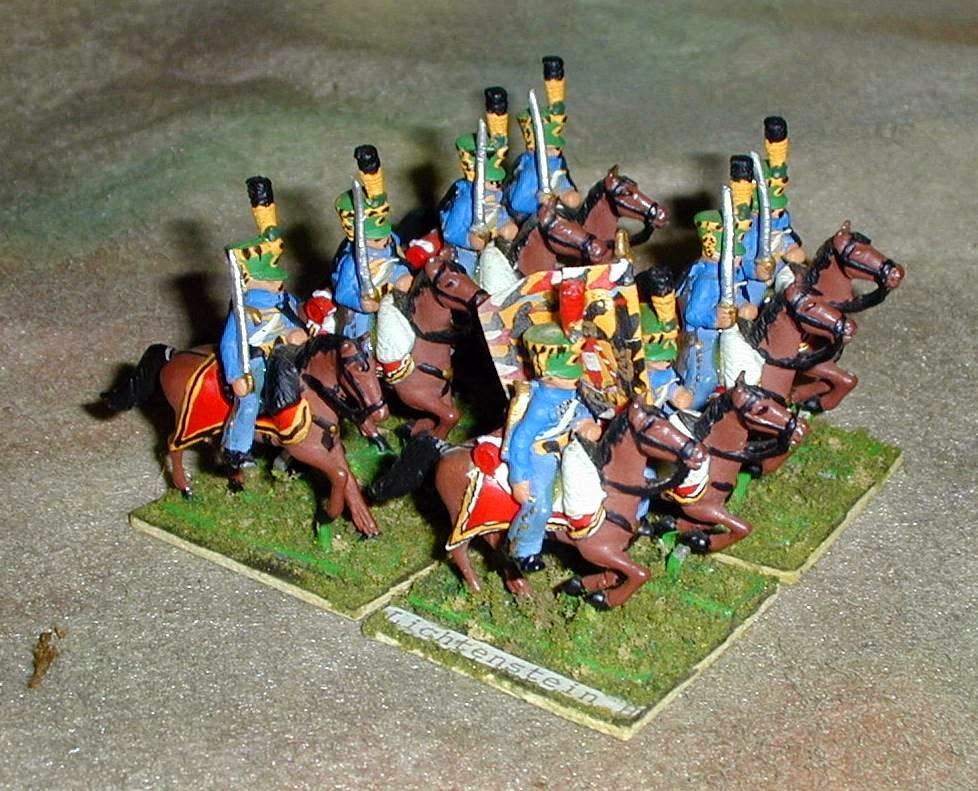 This colorful unit is HR #7, Lichtenstein. the bright green shakos are quite striking, no? 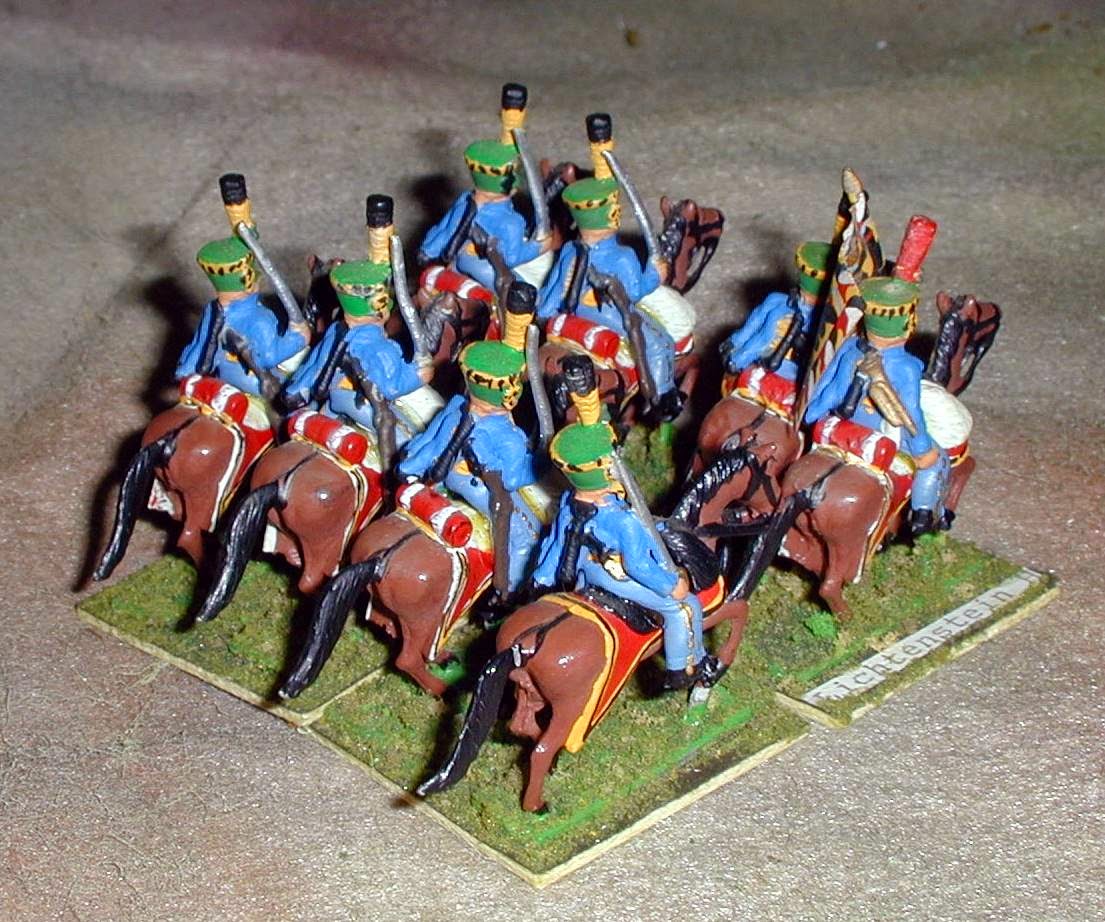 These are really vintage Minifigs, among the first of their "new" Napoleonic ranges. I remember painting them well - it was November, 1975, and I had finished painting them as a tension reliever while studying for midterm exams. I wanted to spray then with the usual varnish, and went out onto the fire escape in my dorm to do so. Unfortunately, it was a cool, very humid day, which resulted in my first experience of the dreaded varnish "frost", which really wrecked the paint jobs. I spot touched them up here and there before eventually deciding to completely repaint them several years later. Grrr!  Now we know ways to reverse this dreaded occurrence, or even better, never spray on varnish on  humid days!! 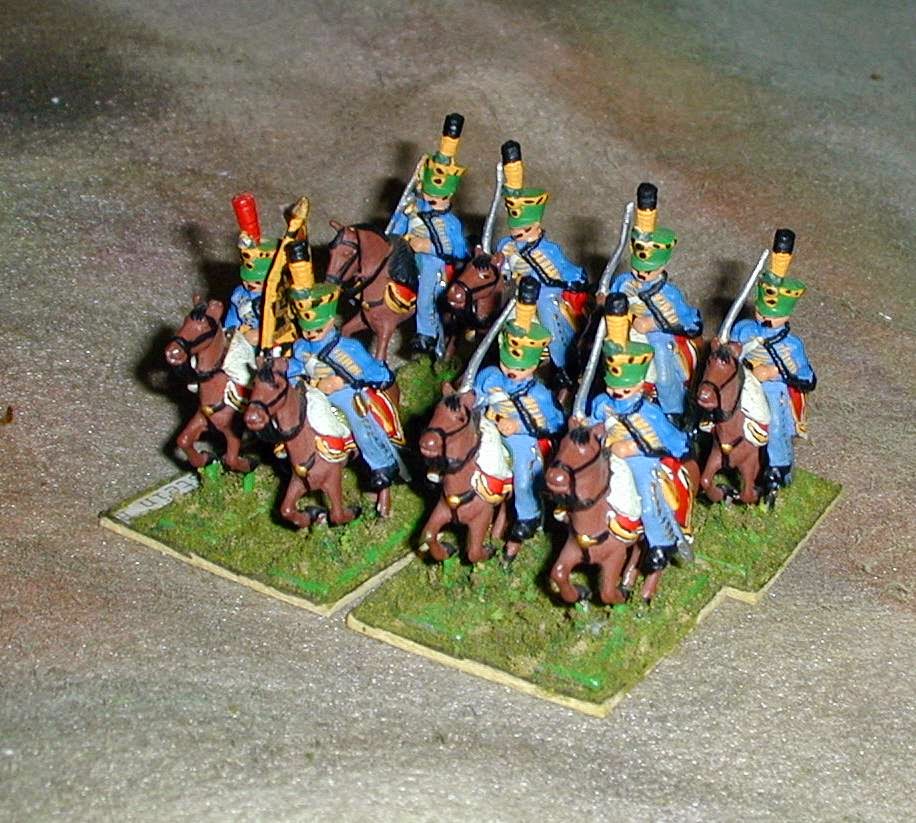 On the simple but effective sculpting of the Minifigs, painting the cords yellow with black dots works OK to suggest the mixed yellow and black braid. 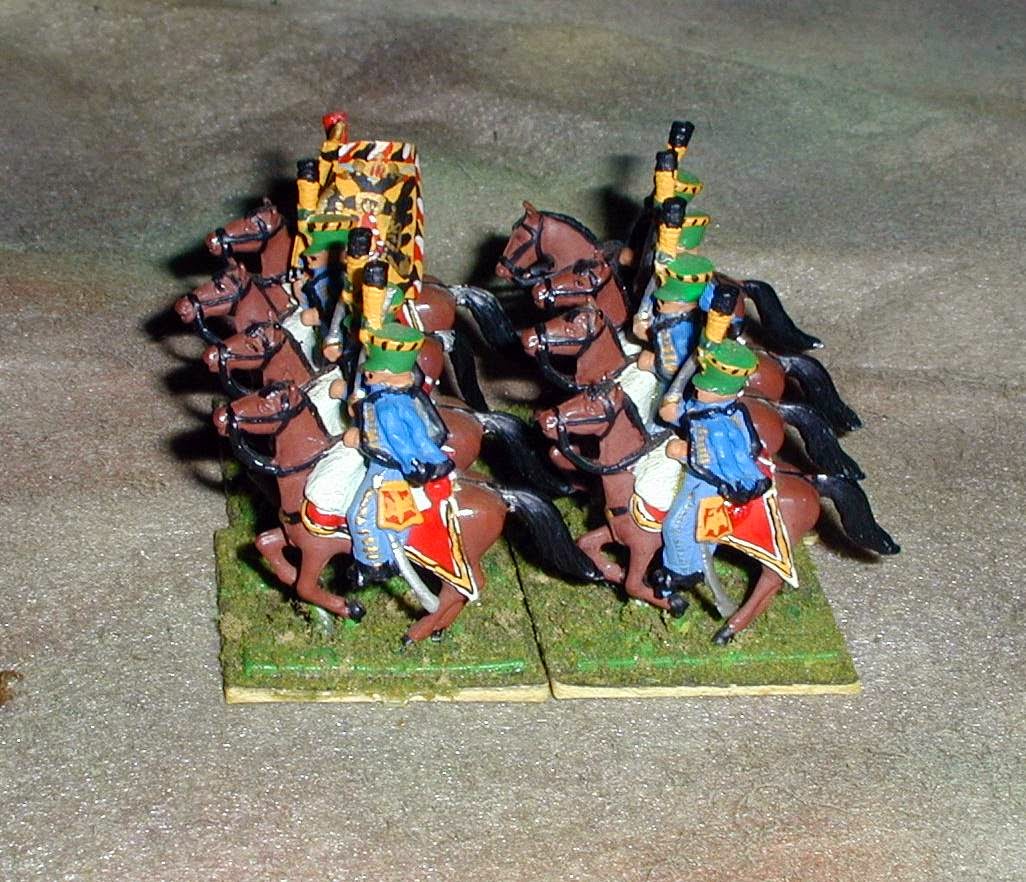 Yes, I know I said the Hussars didn't carry standards, but if I were the Kaiser, mine would.... and so these do, too! I attempted a more elaborate shabraque edging here - white black-yellow-black-white, the black being drawn in with an India ink pen. . 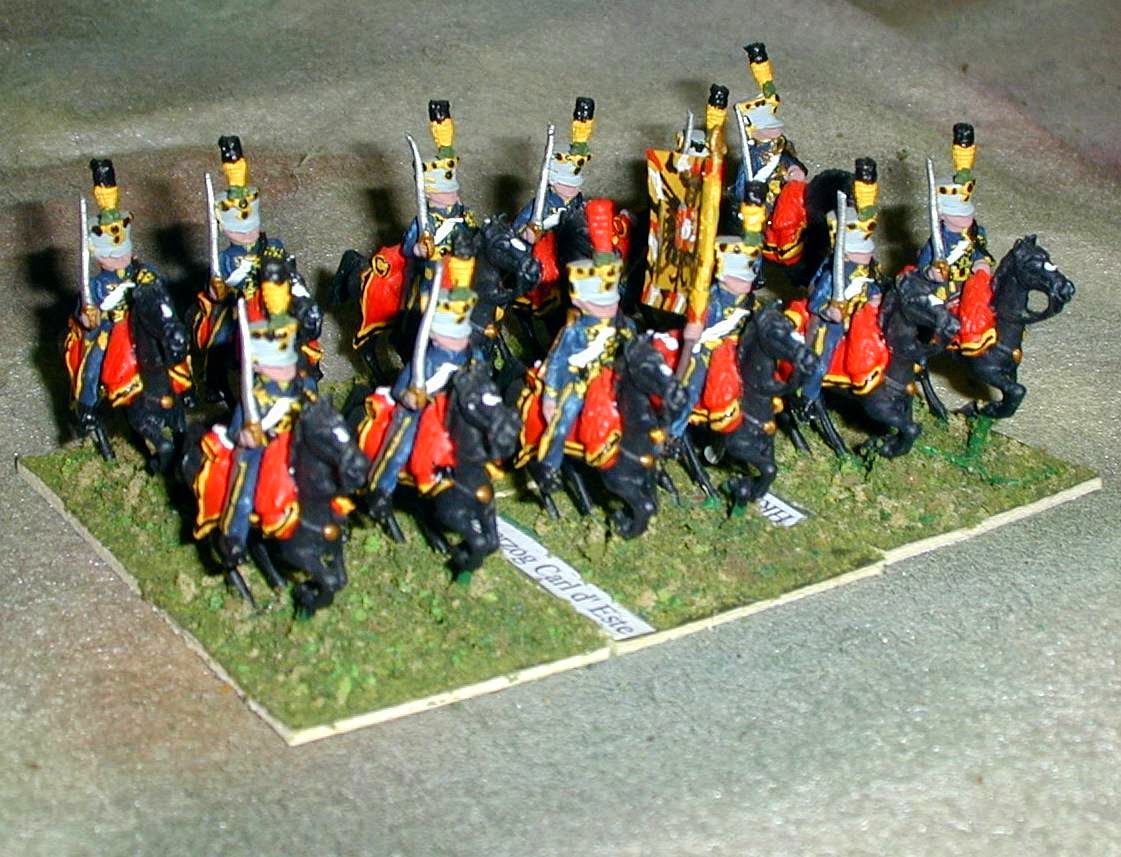 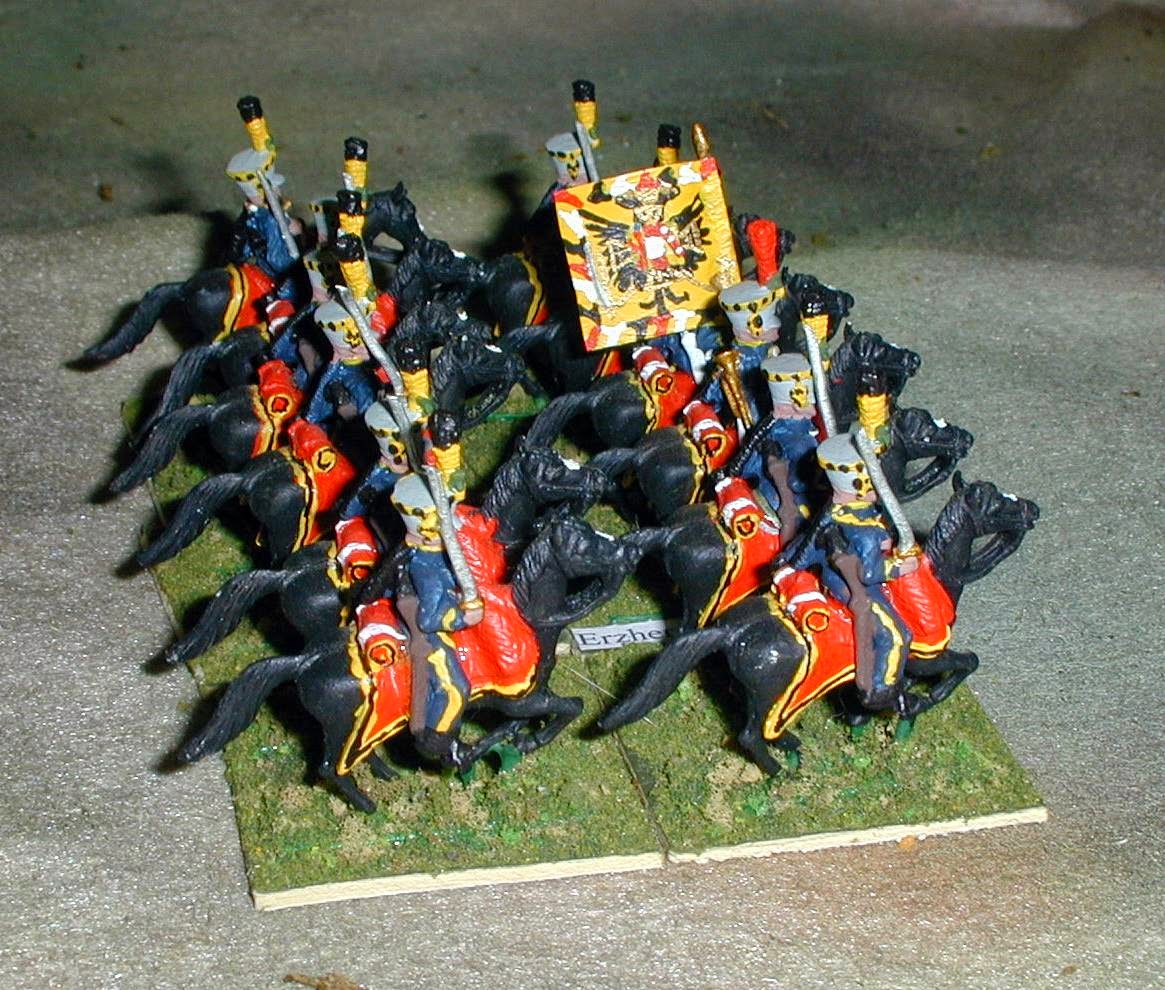 HR #3 wears essentially the same uniform as HR #1, except for the light grey shako. I have also painted this regiment with its dark blue breeches, While I painted HR #1 with the standard light grey cavalry breeches of the Austrian army, which were an option for field wear by the Hussars. 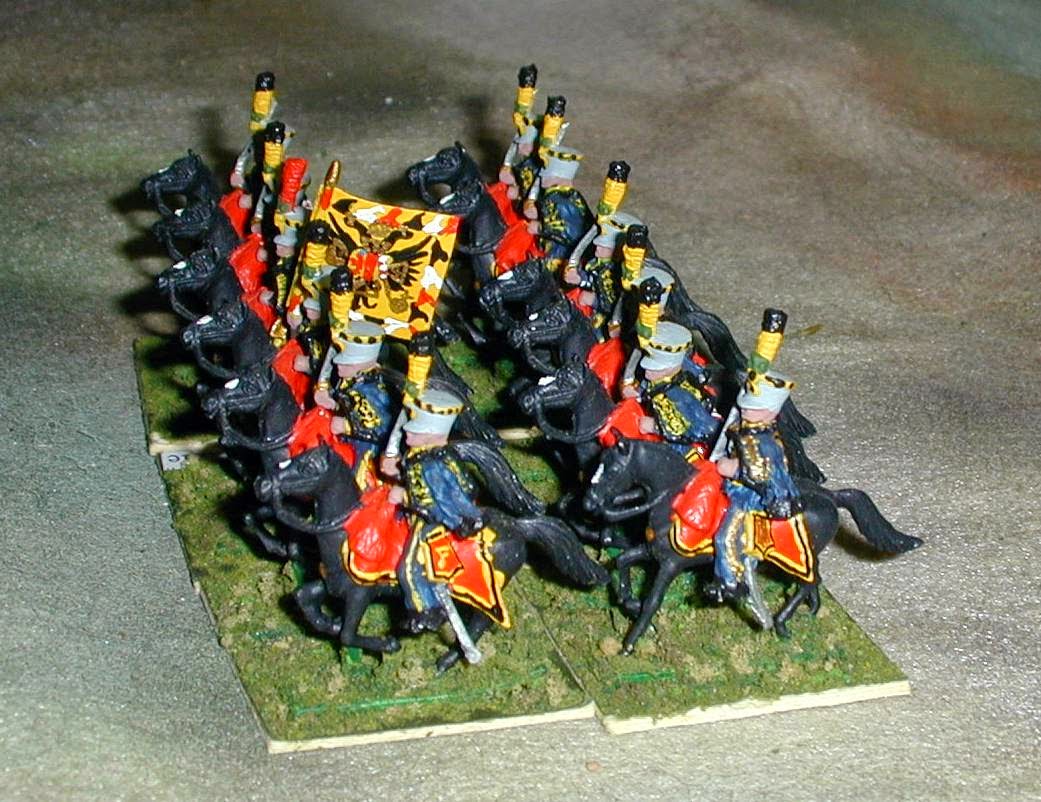 These Minifigs once again carry a standard per my personal preference for same. 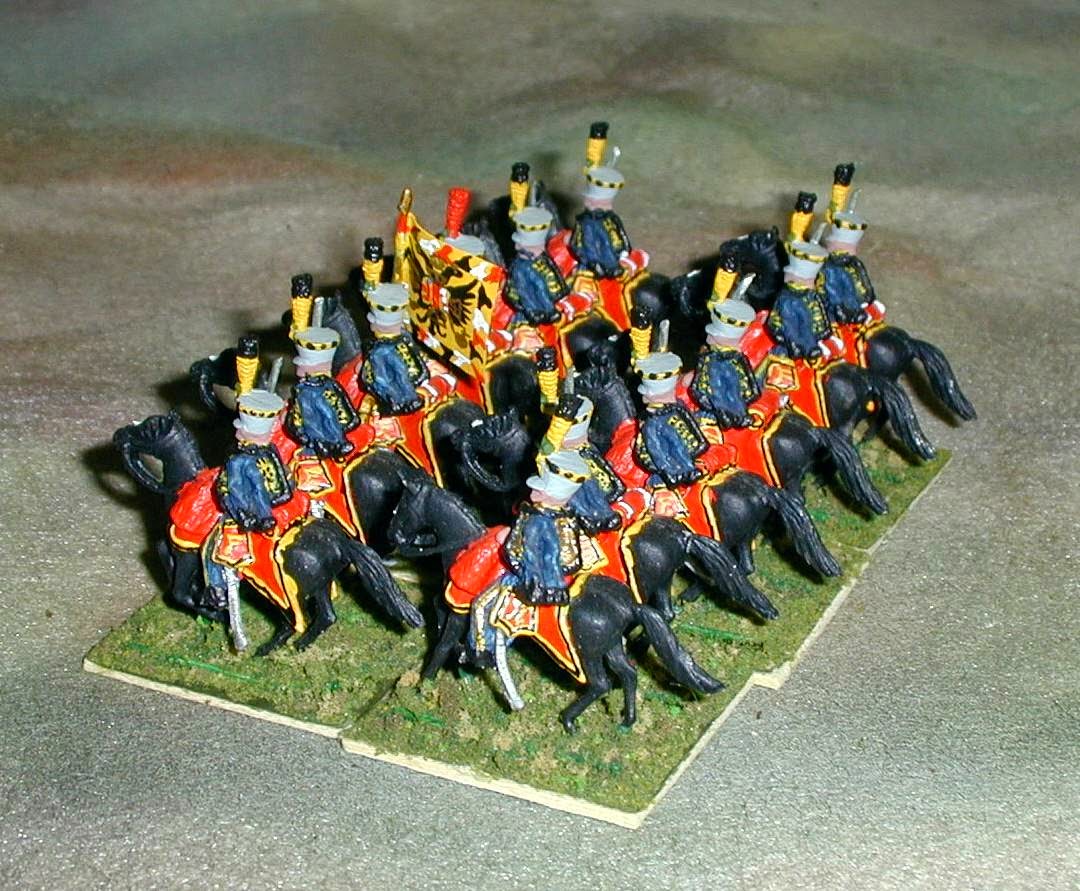 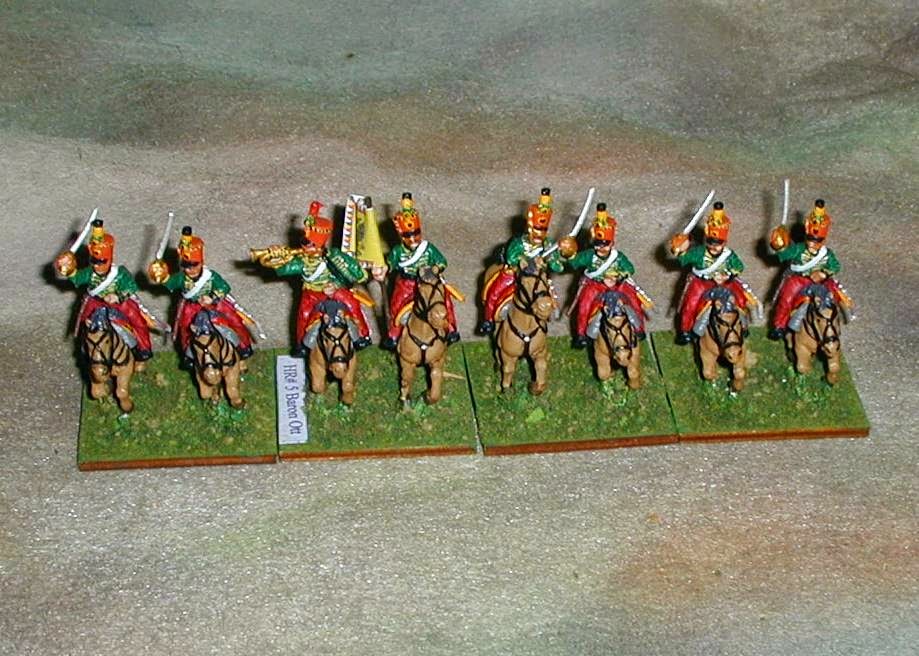 Here is HR #5, Baron Ott, with their striking scarlet shakos. 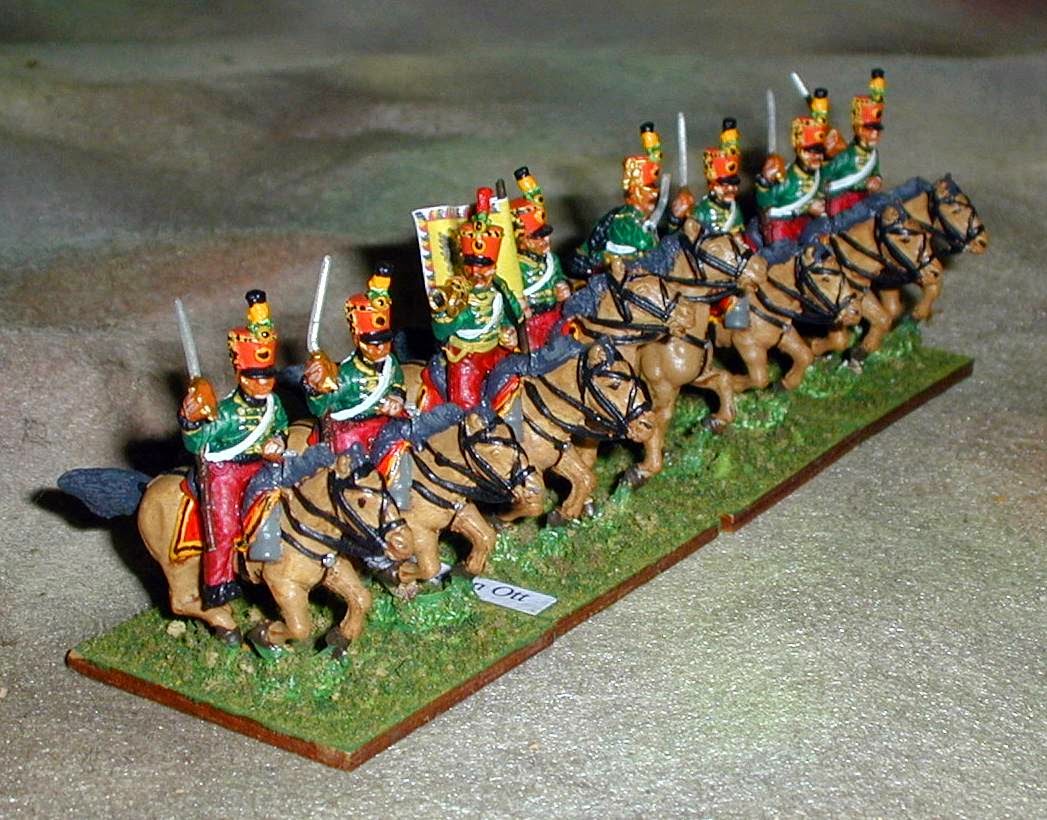 These rather large Essex figures were painted about 7 years ago. 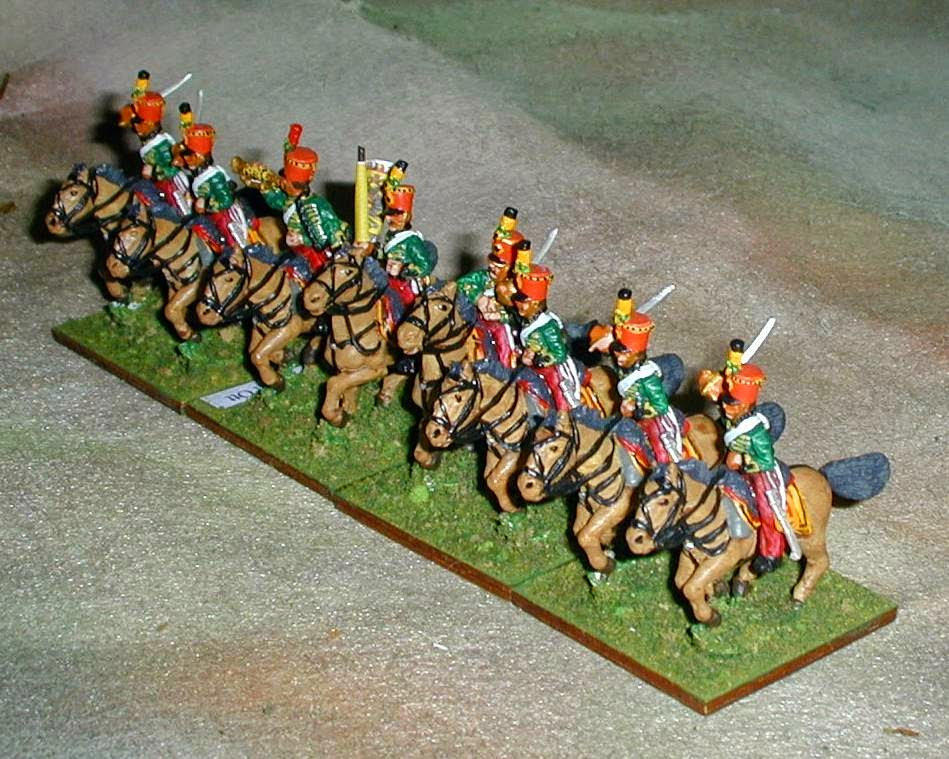 Like most of the rest of the Austrian army in 1809, they sport the "field sign" of a cluster of oak leaves on their shakos. 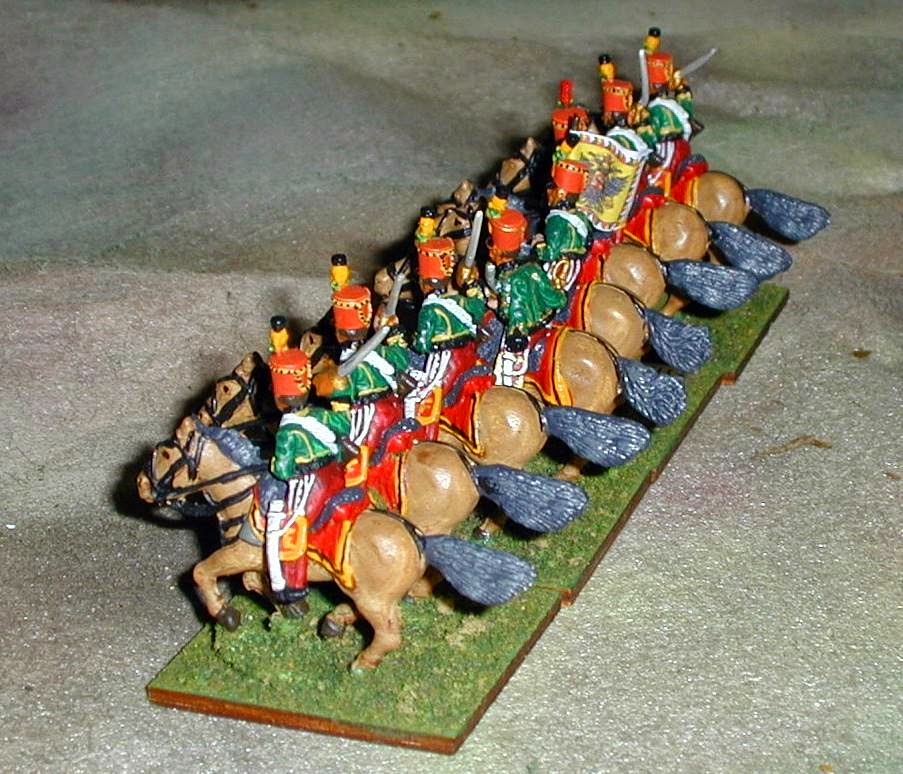 Most of this unit wears their pelisses over their dolmans.

The dark red pants are another colorful element of this regiment's costume!

Written a little after our time (1875), but the rousing "Hungarian Attack March" by Franz Liszt is worth a listen for mood music!