During the Seven Year's War, the electorate of Saxony was invaded by Prussia , with Frederick II taking Dresden. Heavy financial contributions were levied on the populace, and the Saxon army was trapped in the camp at Pirna. The troops were taken prisoner, with many of the soldiers being incorporated into the Prussian army. Saxon territory was devastated during the 7 years war, and by a famine following the war. In 1806, the Prussian army again invaded Saxony as a prelude to its declaration of war with France. Some say the Saxon Army was dragooned into fighting with the Prussians, and others say it voluntarily joined them. With the defeat of the Prussian Army and its Saxon  "allies", Elector Frederick August III of Saxony joined the Confederation of the Rhine, and was elevated to King of Saxony, with the title Friedrich August I.

Like most German states of the time, Saxon Territories were somewhat disjointed, but totaled 1,994 square leagues, including the great cities of Dresden and Leipzig. As a league was about 3 miles, that translates to an area of roughly 18,000 square miles. For comparison, this corresponds to roughly the same area as the US states of Connecticut, Massachusetts, and Rhode Island combined (i.e., Southern New England). The Population of Saxony was 1,680,908 in 1750, dropping to 1,6333,000 following the 7 Year's War, and losing another 65,844 in the famine that followed. By 1785 then population was up to 1,941,806, and grew further to approximately 2,300,000 by 1808.

Elector Frederick Augustus II of Saxony (r. 1734 - 1763) also became King of Poland in 1750. Saxon rule didn't benefit Poland particularly, and after his death in 1763, the Polish crown (an elected position ) passed to Stanislaw August Poniatowski. Internal and external intrigues lead to the First Partition of Poland in 1772 between Prussia, Russia, and Austria, to be followed by a Second Partition in 1793, and a Third Partition took place following the defeat of Kosciuszko's rebellion in 1794. Poland and Saxony would become re-associated following the creation of the Grand Duchy of Warsaw by the Treaty of Tilsit in 1807.

The reputation of the Saxon infantry was mixed. I suspect that may be at least as much due to political issues as anything else. In 1806, despite being at least partially press-ganged, the Saxons performed no worse if not better than their Prussian counterparts. Of course, Napoleon was eager to have Saxony join the budding Confederation of the Rhine, so playing up the Saxon martial  abilities would also be shrewd politics on many levels. In any event, he was so successful in converting Saxony to the French cause that the King of Saxony was his next to last supporter (after Denmark), and suffered almost  as much as a consequence at the Congress of Vienna, losing about 40% of its territory and population (to Prussia, of course). The collapse of the Saxon infantry under Bernadotte at Wagram certainly wasn't one of the finest moments in Saxon military history, but the fact that Bernadotte had made himself thoroughly persona non grata with Napoleon, and subsequent events involving him meant that much of the abuse heaped upon him rubbed off on his Saxon troops as well.

Organization of the Saxon Line Infantry

Just as the history of Saxony extends back before 1500, the Saxon army had been in place for quite some time. The basic composition of the army at the start of the Revolutionary and Napoleonic Wars dated back to that established in 1763. There were ten regiments of Line Infantry, plus the Leib-Grenadier-Garde. There were reorganizations in 1778, 1797, and 1810. In 1797, each Regiment had a staff of 14, comprising 1 Chef (Chief), 1 Oberst (Colonel), 1 Oberstleutnant, 2 Majors, 1 Regimental Quartermaster, 2 Adjutants, 1 Regimental Judge, 1 Regimental Field Surgeon, 1 Staff Field Surgeon, 2 Cadets (Faehnjunker), and 1 Provost. Each regiment had 2 battalions, each of 1 Grenadier and 4 Musketeer companies; in practice the Grenadier companies were commonly brigaded together into Grenadier battalions. Each company had: 1 Captain, 1 First Lt., 1 Second Lt., 1 Cadet (not in Grenadiers), 3 Sergeants, 1 Quartermaster, 1 Field Surgeon, 8 Corporals, 3 Drummers, 2 Fifers, 2 Sappers, and 150 privates.  Thus a company had 174 men total, and a full regiment had a paper strength of 1,784 men. The 1810 reorganization resulted in disbanding 4 of the Infantry regiments and redistributing the men to the remaining outfits. This resulted in an increased company strength, each having 180 privates. This brought the paper strength of a 10 company regiment with staff up to 2,043. Once again, the Grenadiers were usually brigaded together into separate 4 company battalions.

Uniforms of the Saxon line Infantry

The Saxon Infantry changed the color of their jackets from Dark Blue to White in 1765 (probably a reaction against being press-ganged to fight for Prussia during the 7 Years War!). The regimental distinctive colors appeared on the collars, cuffs, and lapels. The turnbacks were left white. Pants were white, as were belts. A small black bicorn was worn until 1810, when a French style shako was finally adopted. The bicorn had a white pom pom with the center in the facing color, and a white cockade. NCO's had gold or silver lace on the hat according to the button color of the regiment, and the hair was worn powdered and in a queue until 1808.  Grenadiers wore a black Austrian Style bearskin with a brass plate bearing the arms of Saxony; the fabric on the back was in white and the facing color. The regimental Schuetzen had green plumes on the bicorn and carried rifles. The 1810 shako had a brass plate on the front with the crowned royal Cipher, "FA", and was completed with white cords and cockade, and a white plume tipped with the regimental facing color. Grenadiers had red cords and plumes on their shakos, as well as red epaulets and sword knots.

* Knoetel says the 1810 uniform had facing colored piping on the shoulder straps and on the white turnbacks as well. 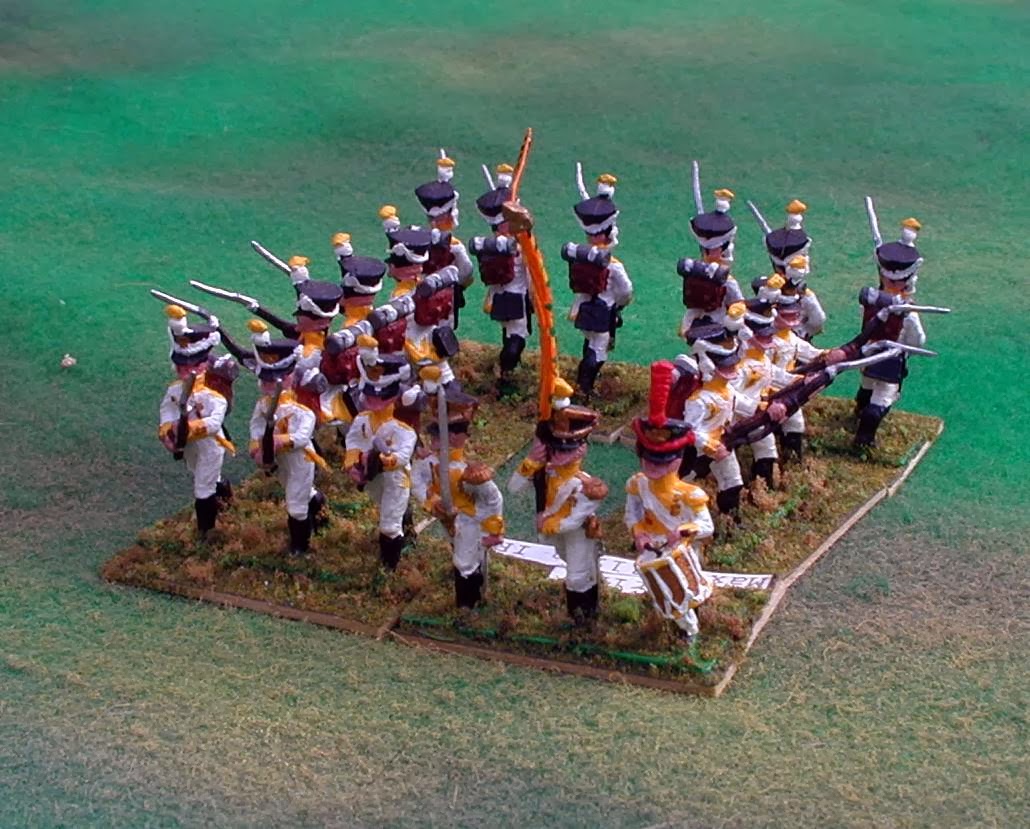 IR Prinz Maximillian  wearing its yellow facings on the collar, cuffs and lapels. I have also painted the turnbacks in the facing color. Although completely logical, this is incorrect; they should be plain white (or perhaps white piped in the facing color - see above). Odd, but that's the way the uniform was! Note the red plume and cords for the drummer, even though he is not a member of a grenadier company. 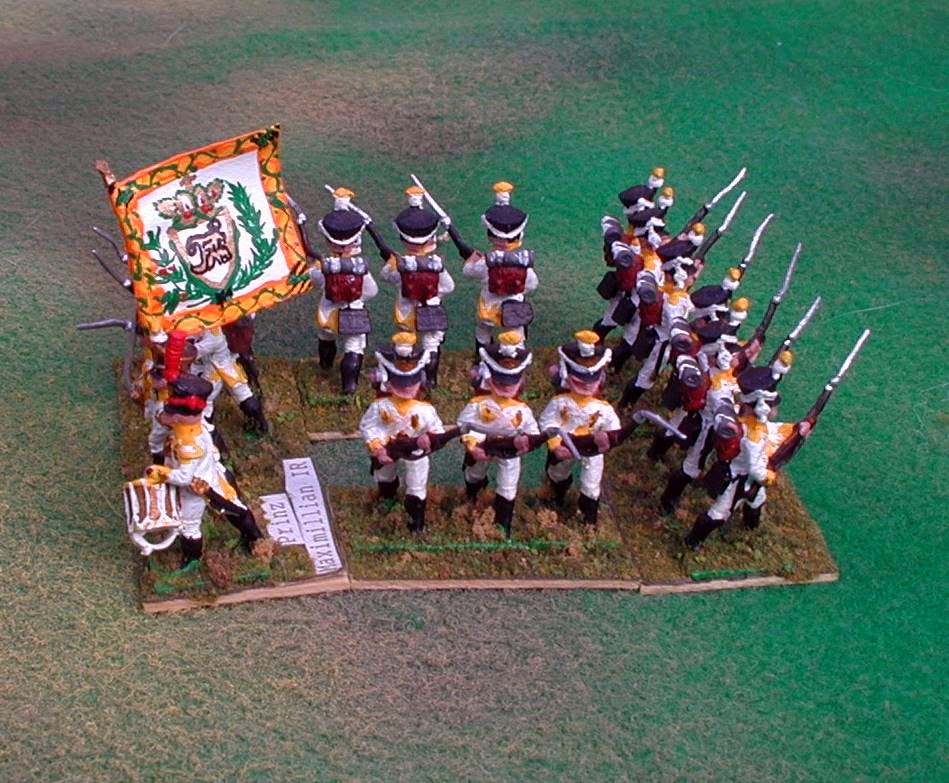 The standards of the Saxon units were of a unique design, the most distinctive feature being the regimental border patterns. All of their flags bore the crowned and wreathed royal cipher "FAR" on one side, and the arms of Saxony on a mantle on the reverse. This regiment's border pattern has red, yellow and green 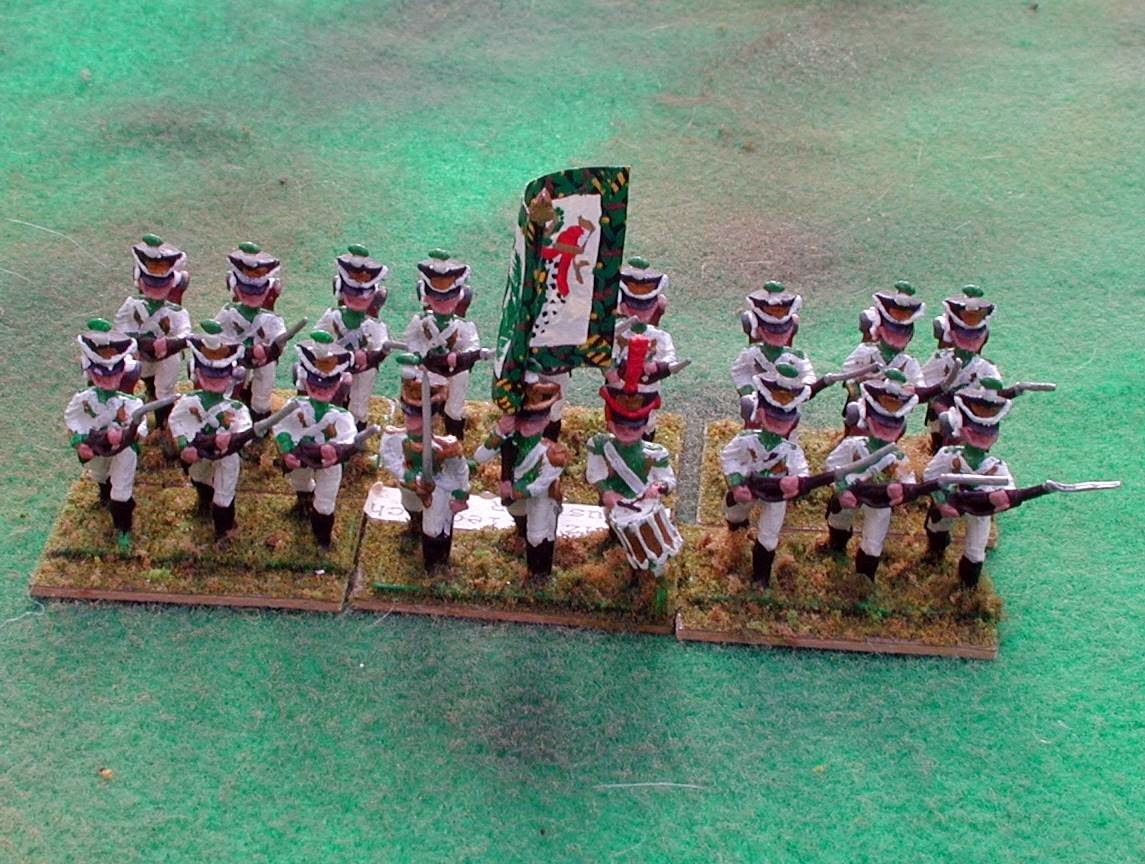 This is IR Prinz Friedrich August on the advance. The entire style of their 1810 pattern uniforms and rank distinctions are now along French lines. 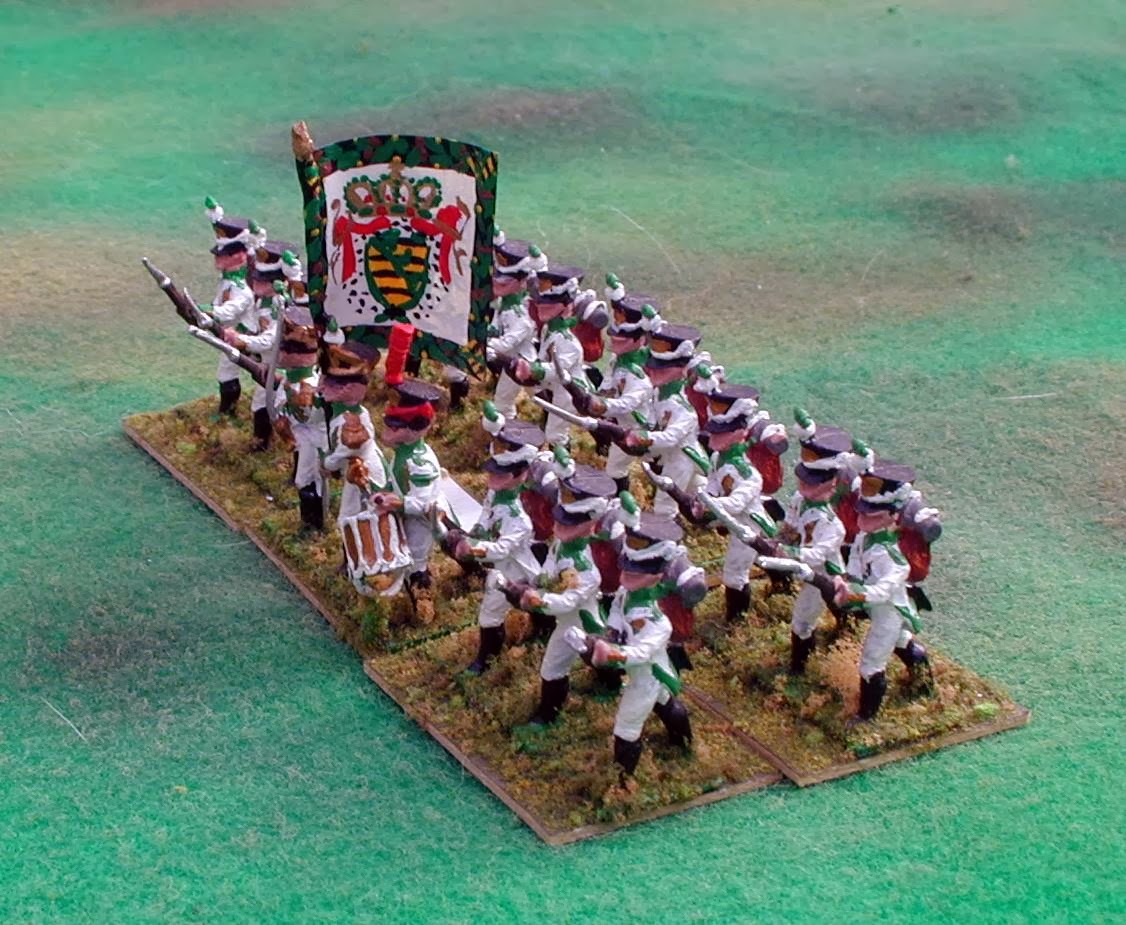 IR  Prinz Friedrich August with its light green facings (once again, the turnbacks should have been left white). Note the completely different border pattern on the standard from the earlier regiment 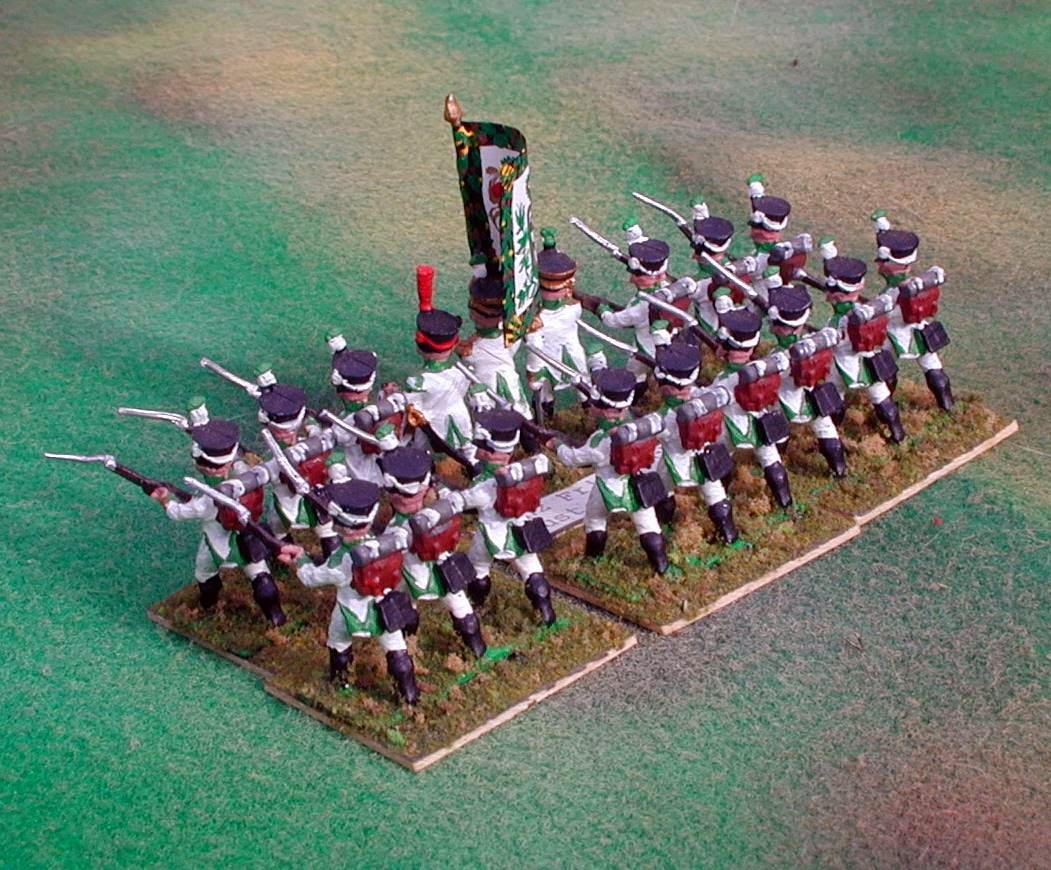 Lie all of my Saxons, these are 25mm Minifigs,"French" figures with just a paint conversion to make them into 1810 Saxons! They were painted well over 25 years ago. 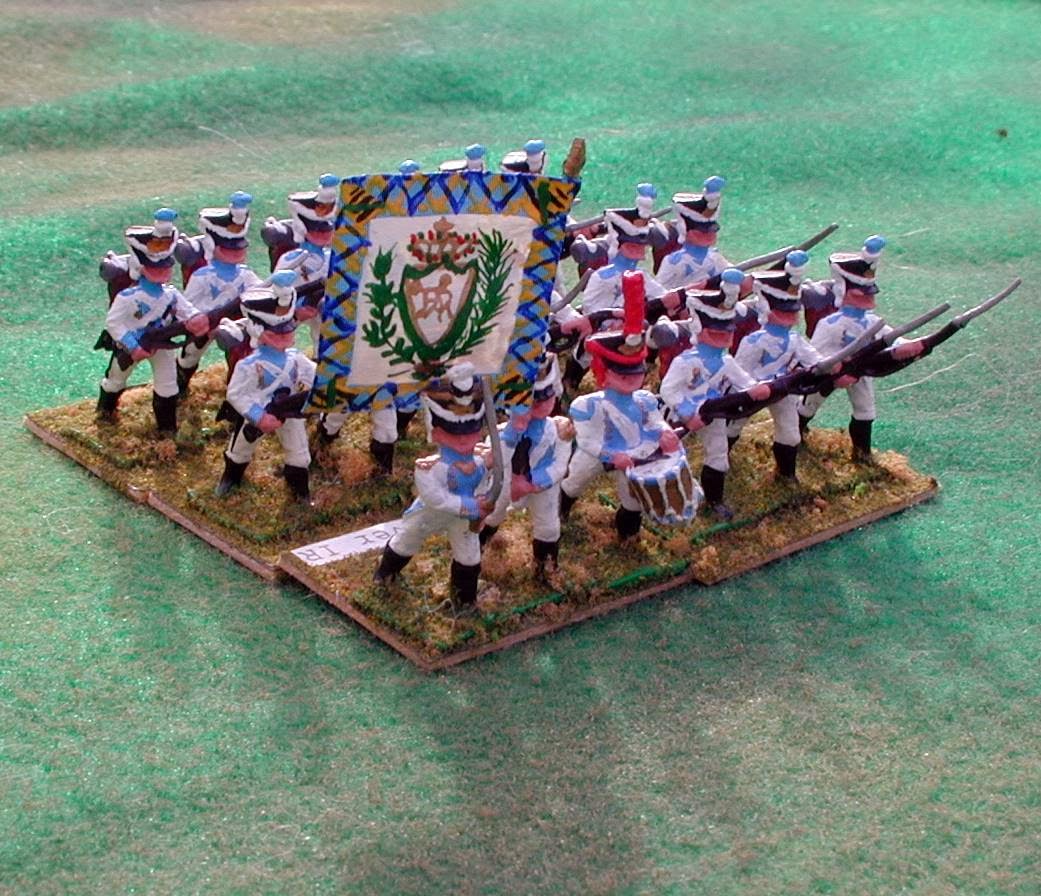 IR Prinz Xaver with its light blue facings. Note yet another distinctly different border pattern on the standard. This regiment was actually disbanded in 1810, but I especially liked this border pattern. 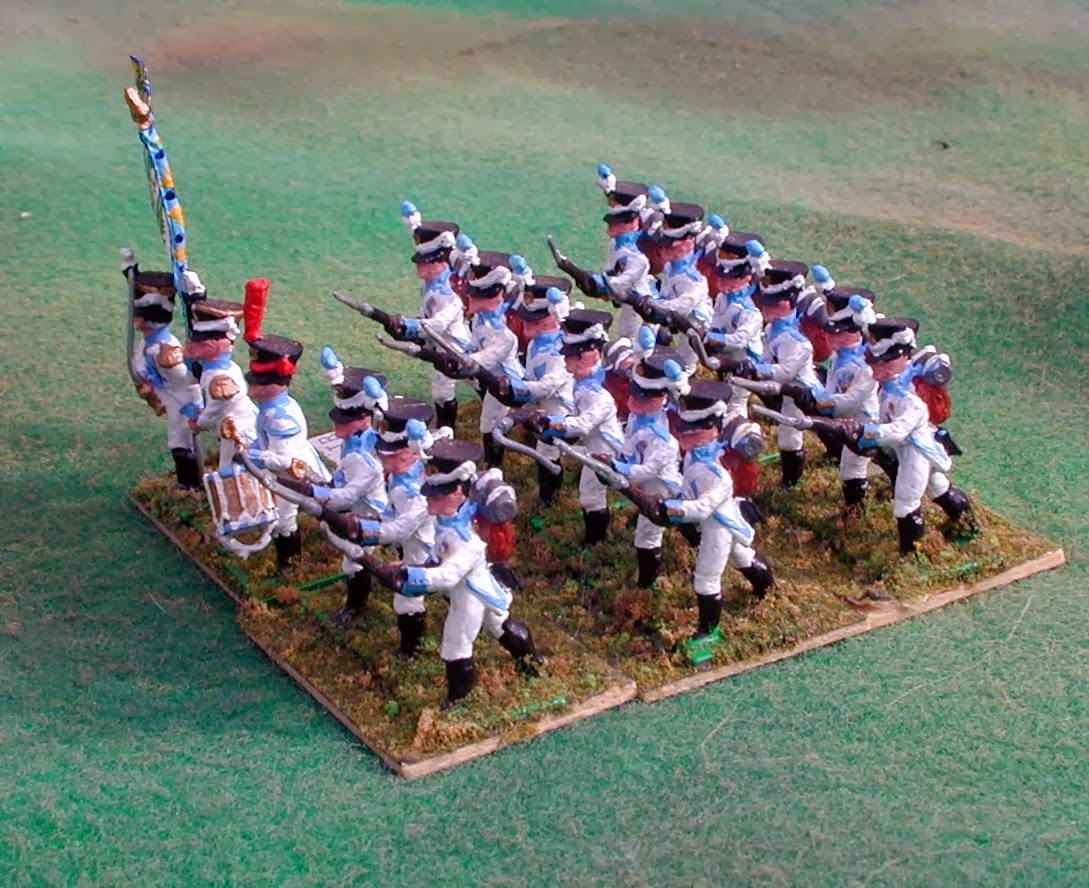 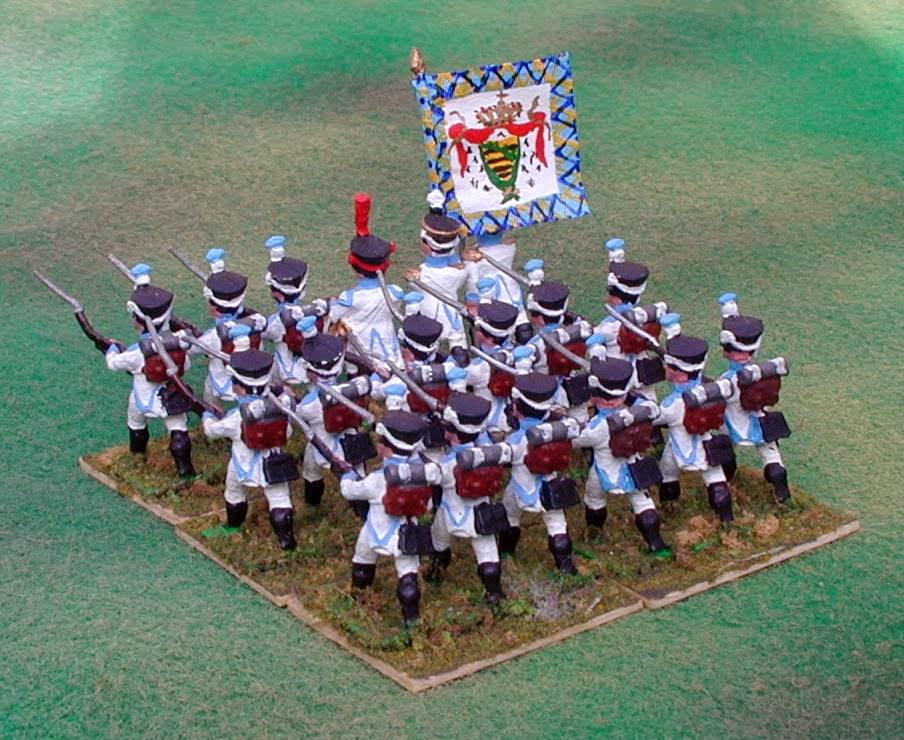 The Arms of Saxony are seen well here - Barry, Sable and Or, a Bend of Common Rue. Rue is a bitter  herb cultivated in the past as a condiment and medicine, now largely found only in flower gardens, having blue-green leaves and yellow flowers. 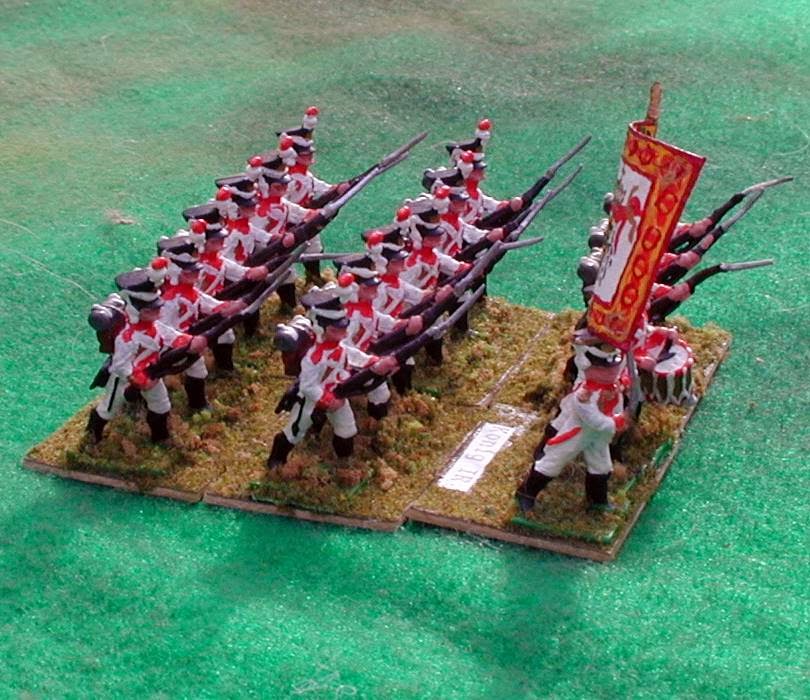 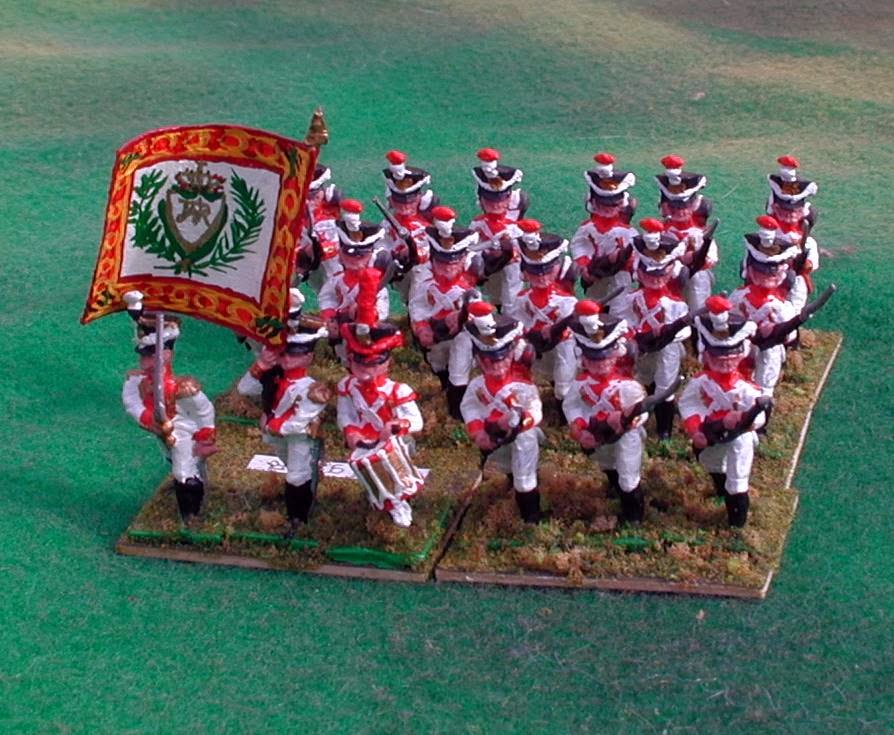 Note yet another distinct border pattern on their flag; the unique designs really make Saxon flags stand out on the tabletop. All of the flags were hand painted, so I was very pleased with how they look. 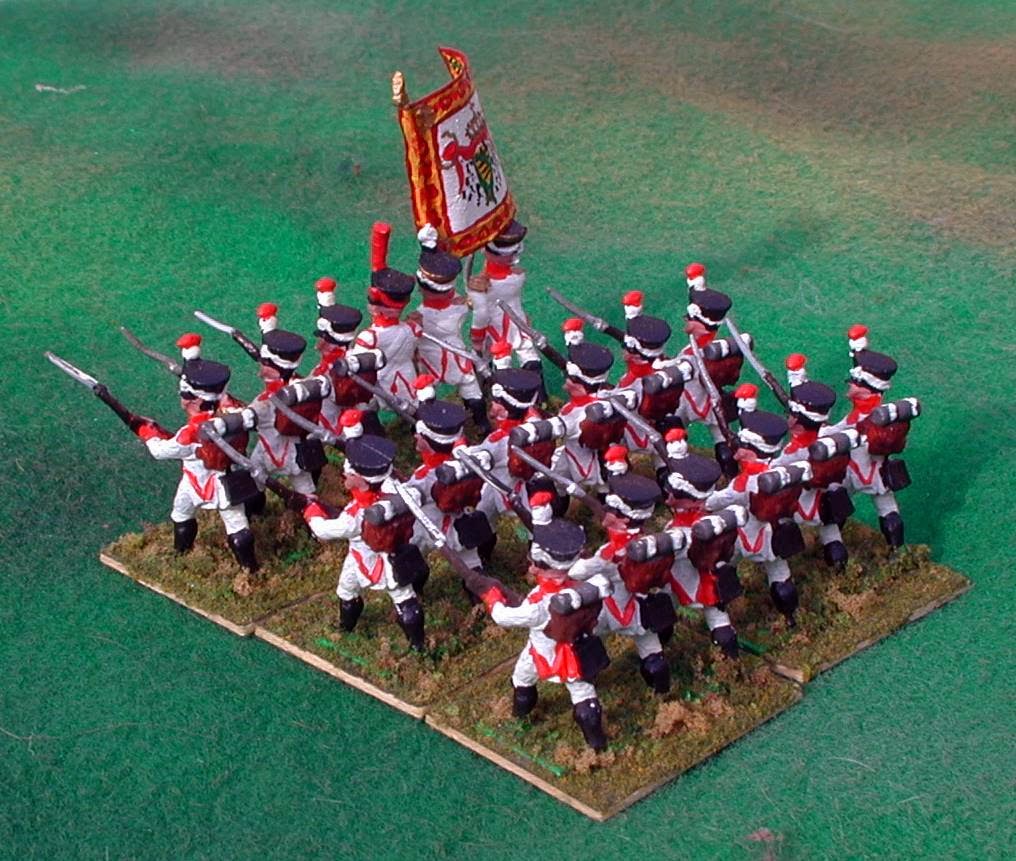 Another view of Saxon IR Koenig.

Sources for this and forthcoming posts on the Saxons:

Flags and Standards of the Napoleonic Wars, Keith Over.

Grosser General Staff site - nice plates on many of the German states, including the Saxons:
http://www.grosser-generalstab.de/sturm/sturm220.html

Plates of the Saxon Army 1805-1806
http://www.napoleon-series.org/military/organization/c_saxon1805.html

Histunif site Saxon pages - includes detailed sketches of the Heavy cavalry lace and shabraque edging patterns, and reduced images of all of the fantastic Peter Bunde plates (used with his permission, the full, detailed plates and text are all available commercially from Peter)
http://www.histunif.com/confederation/Saxe/saxe.htm
Posted by Gonsalvo at 6:58 PM