Battle of Santo Miguel with Die Fighting 2: Set up

For a first play through of Bob Jones' new "Die Fighting 2!" rules, I decided to take my new British Napoleonic troops out for a test drive. This also allowed me to use some other British allied troops that had seldom, if ever seen the tabletop - my Portuguese and my Brunswickers. My large basement table remains set up for a retest of my Bicocca scenario with Hostile Realms, so the dining room table was commandeered for the day. With a second, folding camp table along side, it made a 6 foot by 6 foot surface for the game, which would be set in Spain... the battle of Santo Miguel.

One of the key difference between the original version of Die Fighting! and the second edition was immediately reinforced upon the initial set up of the scenario. In the original version, each unit contributed a number of red "resource dice"dice to an army wide pool, according to its type. In Die Fighting 2!, the initial resource dice are generated by the commanders - the number of units in each command is not factored in at all (typically, a Command has 7 -12 units in it). Each of the commanders is rated by rolling 2 D6; the score determines the number of Yellow Command Dice each leader has; many will have special characteristics as well. The various period templates have suggestions for modifications of these rolls for nationality and year, but we used the unmodified rolls for this game. Each Commander then rills the appropriate number of Yellow dice TWICE before the start of the game - the total is the number of resource dice that Command starts with. Each army C-in-C rolls his yellow dice only once, and takes that number of Red Resource dice. Prior to the start of the game, the C-in-C can allocate some or all of his red Resource Dice to any mix of his commands.

Similarly the individual units can be Poor, Average, or Crack. This too is determined by rolling 2 D6 for each unit, and once again the period templates have suggested modifiers by nation and year. Militia units, however, can never be Crack and Guard units can never be Poor. Once again, we ignored those modifiers for this battle. The OOB below was set  by the scenario; the ratings and starting dice as we rolled them are also shown. 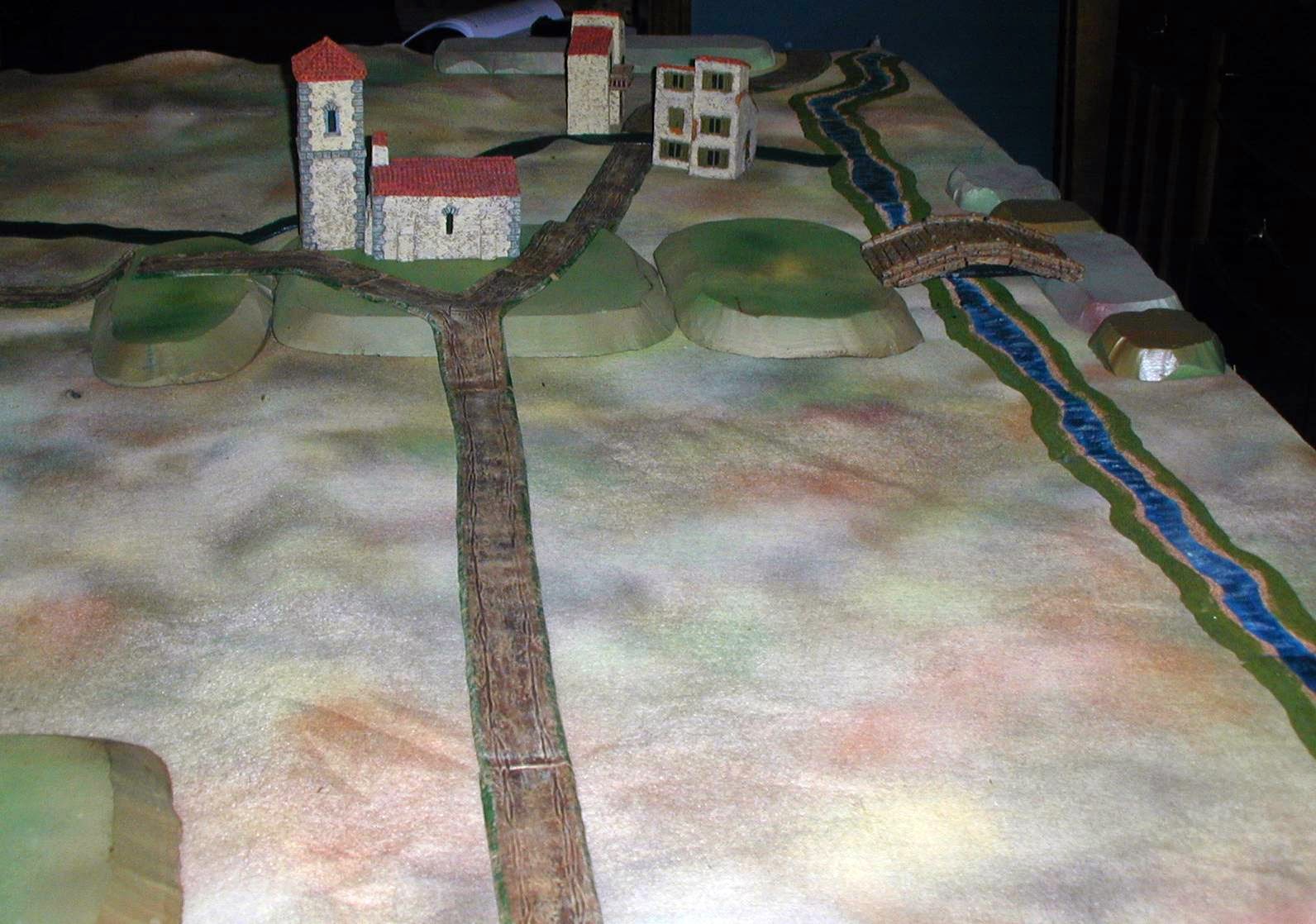 The battlefield from the West, Southern half. he Chapel of Santo Miguel on the plateau dominates the field, and is a British objective. So too are the bridge and especially the distant road exiting through a ravine, which is the French line of Communications. The River Muro is unfordable, and the  distant, swift flowing stream beyond the plateau is Class 3. 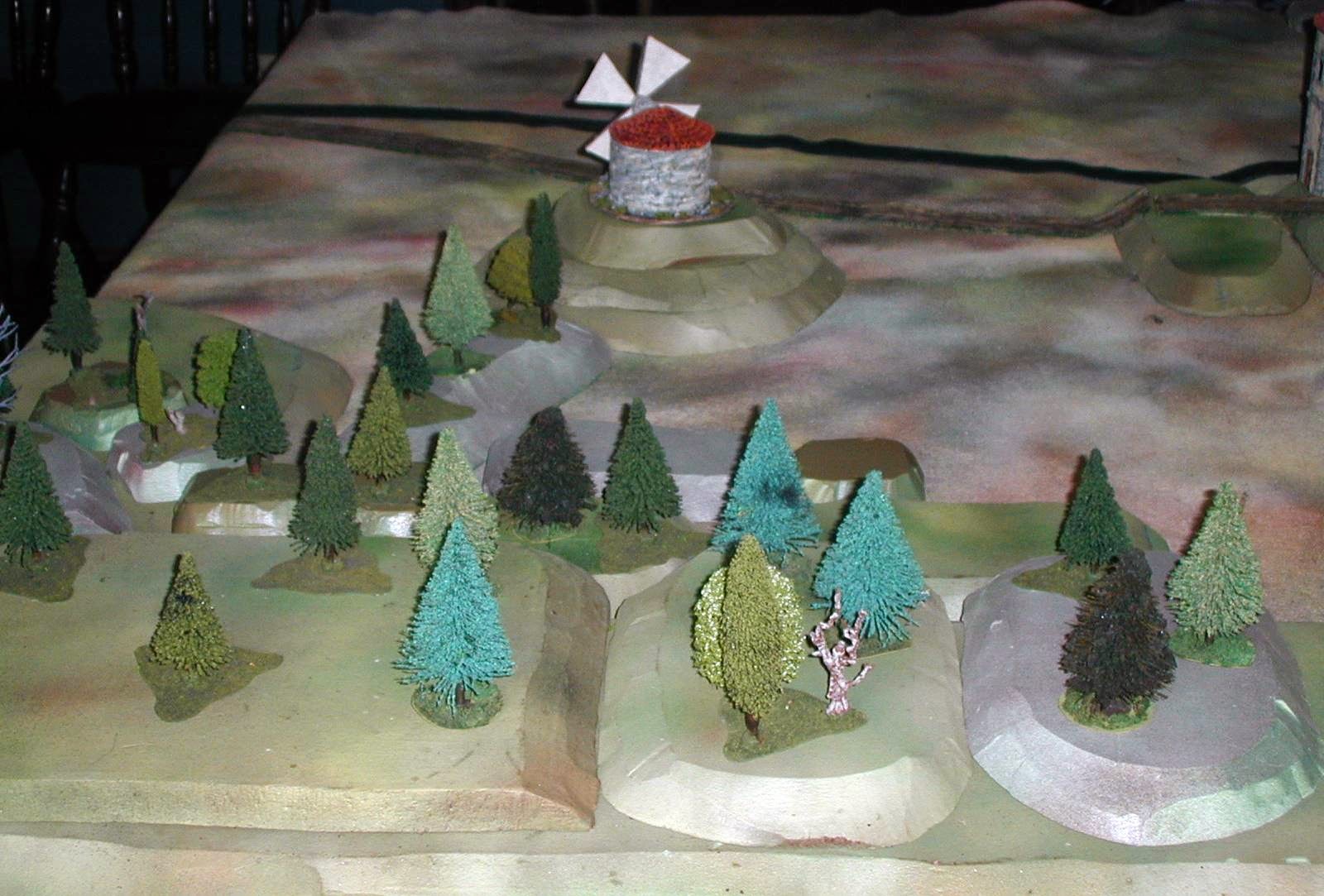 The Battlefield from the West, Northern half, Dominated by step hillsides. The wooded portions are class 2 terrain, the bare hillsides are class 2. 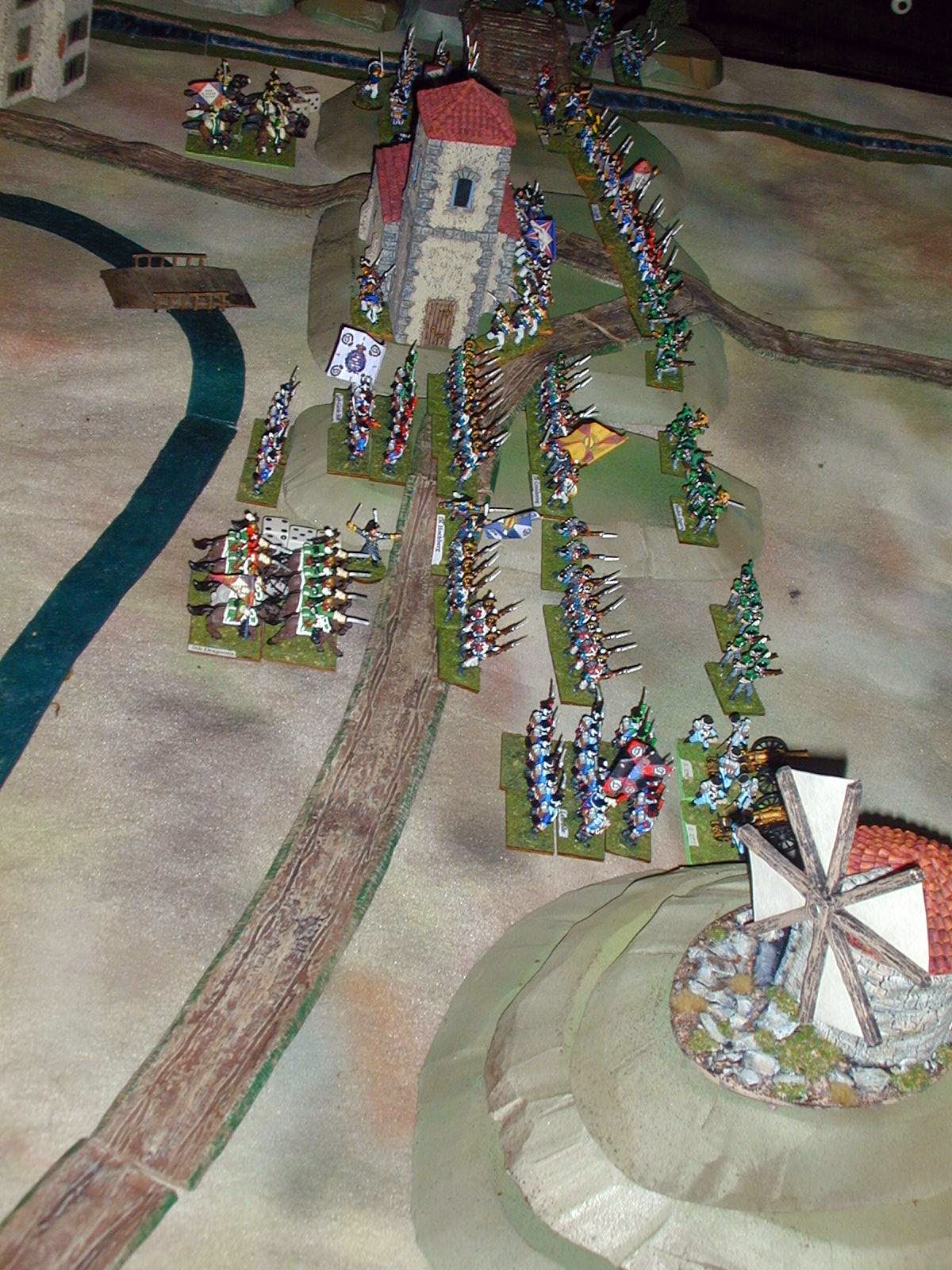 The French Division occupies the Southern part of the plateau, supported by a Rhinebund Division to the North. Their objective is to hold off the British and their allies until nightfall, so that they can make good their withdrawal. Marechal Pierre is said to be one of the Emperor's favorites. When presented with candidates for command, he is often heard to ask "Ist-il... Heureux?" 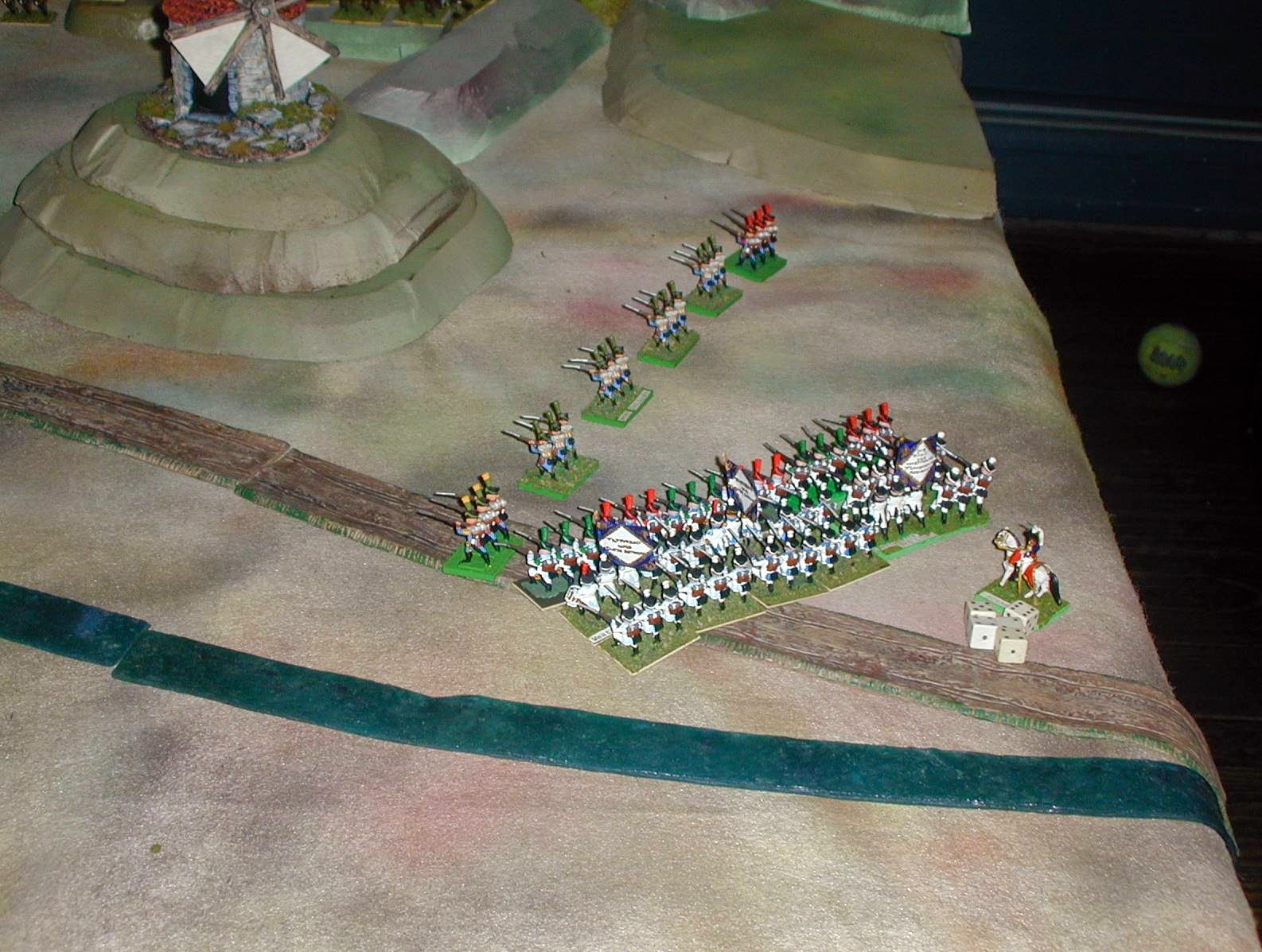 A small, not very enthusiastic Westphalian Division has lagged behind, but is marching to the South towards the sound of the guns! 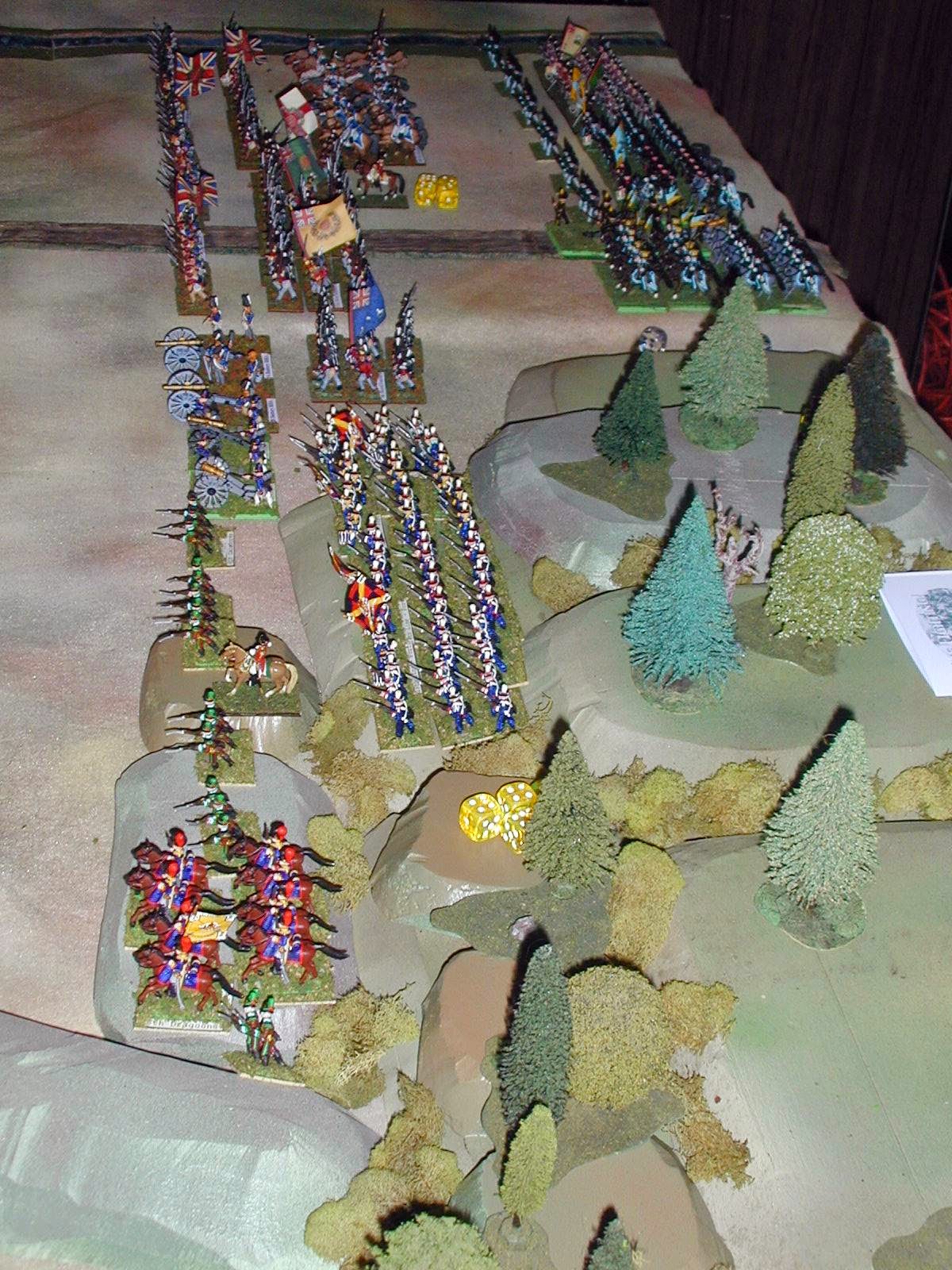 Sir Barry's  main strength is the excellent British Division to the South, supported by Portuguese allies to the North, and a band of Brunswickers of dubious quality supporting them from behind.

Both Sir Barry and Marechal Pierre deigned to transfer any of their personal Resource Dice pool to their sub-commands prior to the start of the game, evidently preferring to maintain flexibility and await events. We shall see if this was a prudent decision or not! Thus the table is set, and the players have taken the stage. The next post will reveal how the game unfolded...