Another, smaller fleet from my collection of 1:1200 Napoleonic warships is the Spanish. At the start of the Revolutionary and Napoleonic Wars, Spain had the third largest fleet, after those of Great Britain and France. At various times, the Spanish were both allied or enemies of both of the two main protagonists, making their ships versatile from a Wargames perspective. 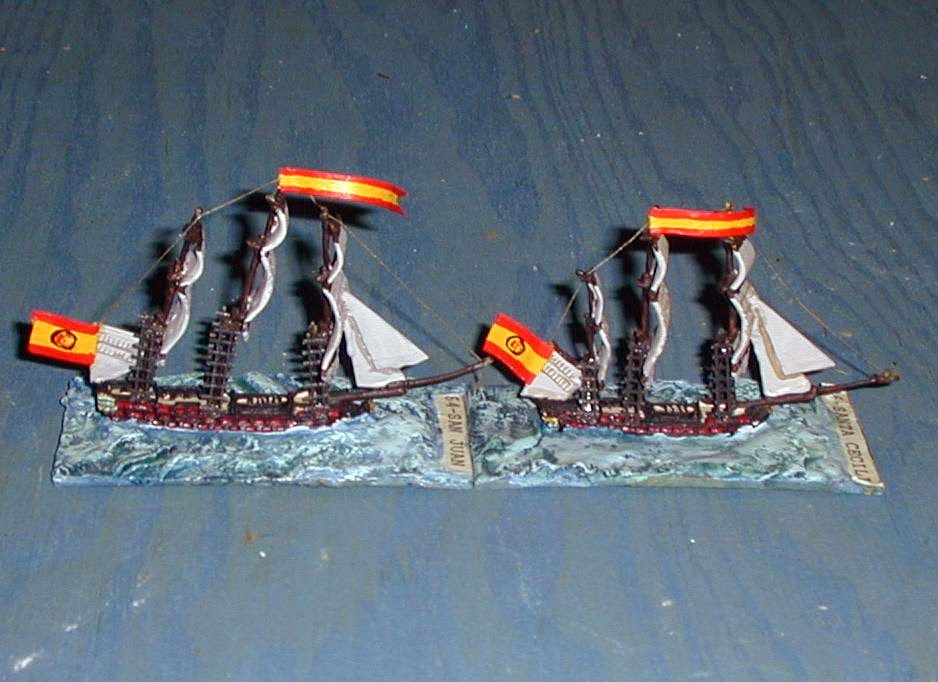 The 36 gun Frigate Santa Cecelia and an old, undersized 64 gun Ship of the Line, the San Juan. 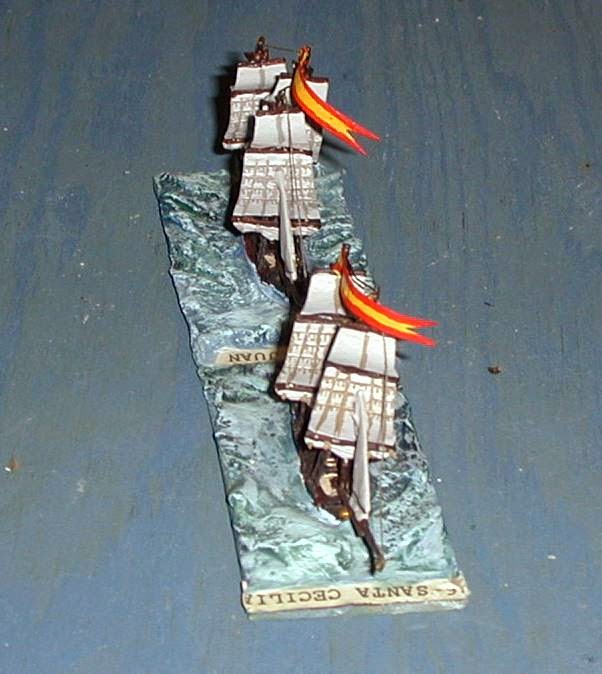 Close up picture of the Santa Cecelia and the  San Juan 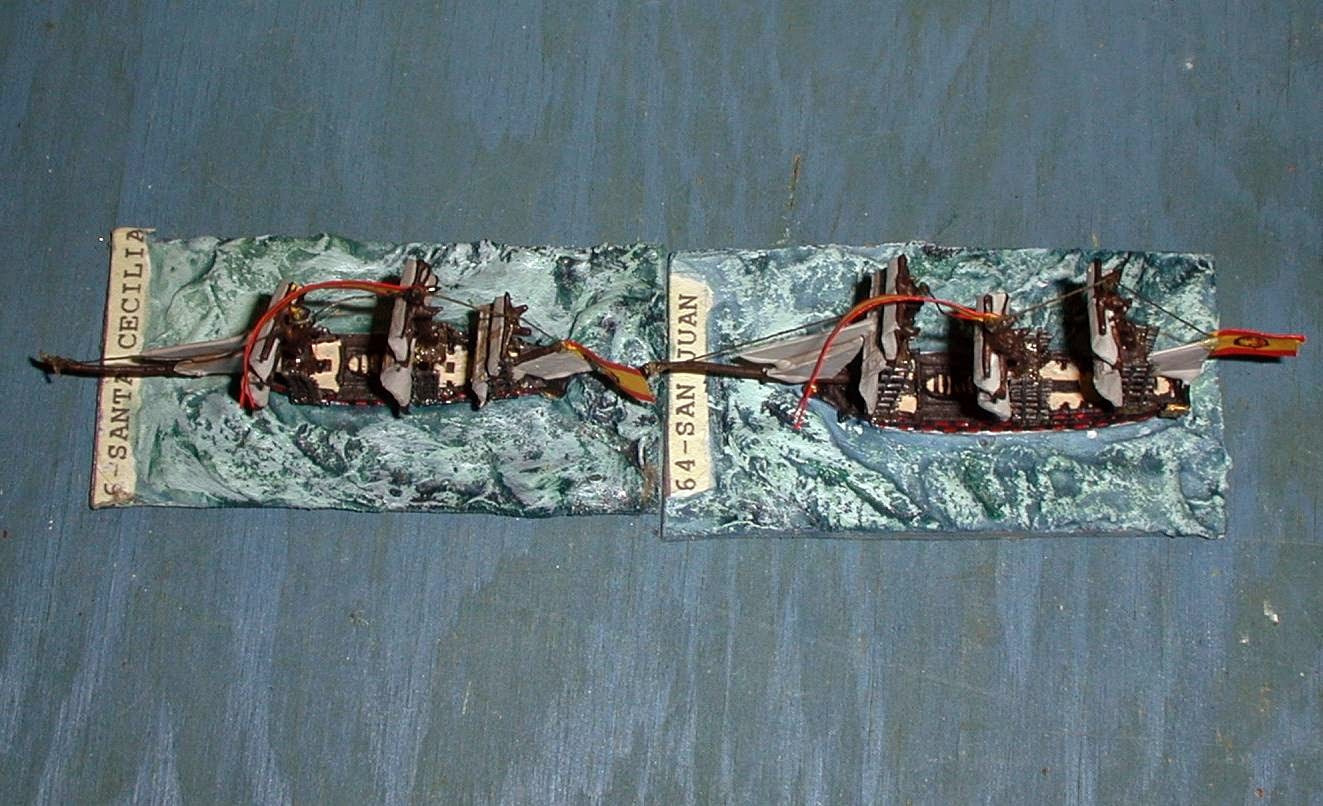 This  top down view gives a better idea of how the decks and Ratlines look. 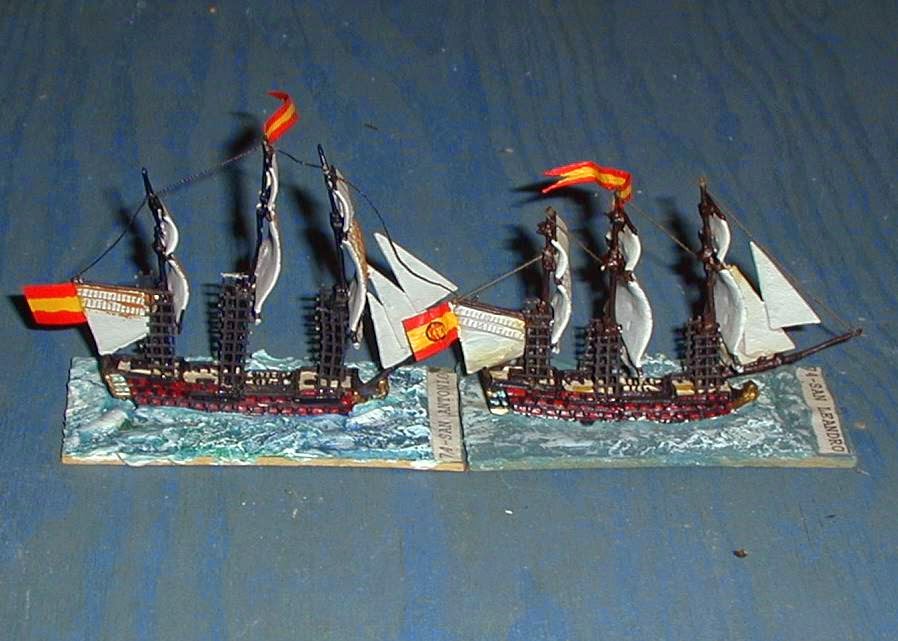 The next pair ate the 74 gun 3rd Rates San Leandro and San Antonio. As a wargames convention, I have chosen to give my Spanish ships dark red sides. There were indeed Spanish ships painted in that scheme, but certainly not the majority. it suits my purposes for ready identification, though - although the colorful Spanish pennants and flags probably do that even better! 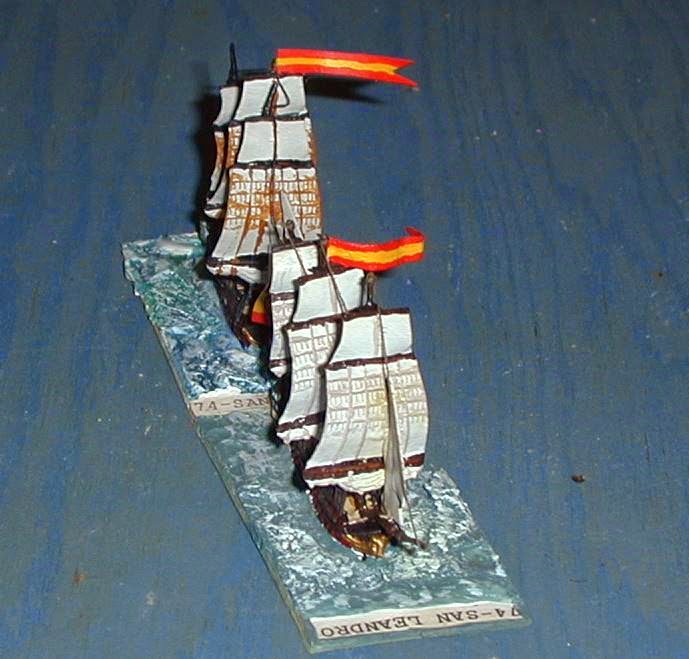 This picture shows the reef lines on the sails well. 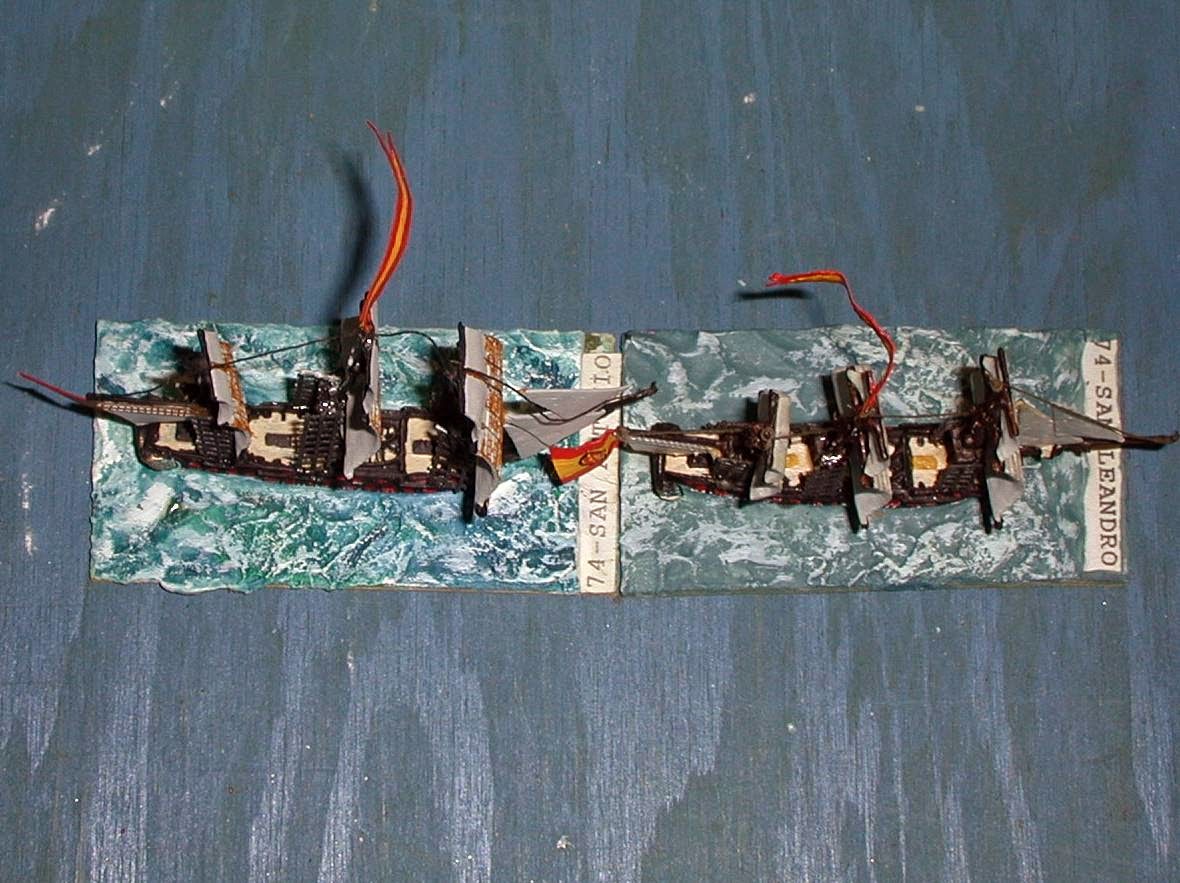 The ships' bases are 1.5 inches wide by 3 inches long. 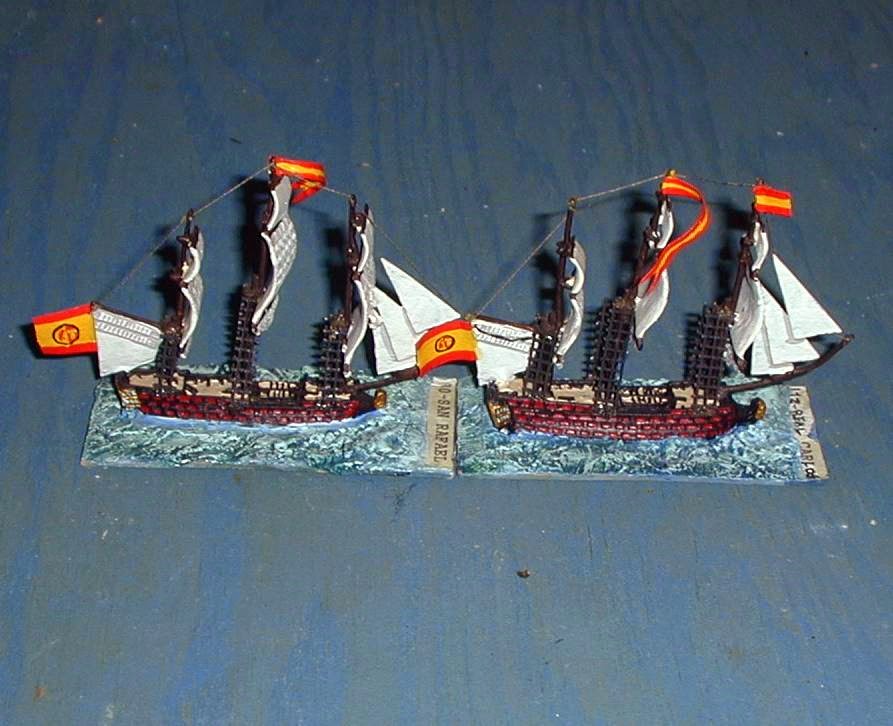 Last are two heavy hitters - the 80 gun San Rafael, and the enormous 112 gun Real Carlos. The Spanuish fleet at the time of the battle of Trafalgar (1805) included the world's largest warship, the gun Santissima Trinidad. It was originally laid down as a 112 gun ship, but was later modified to carry a staggering 140 guns! 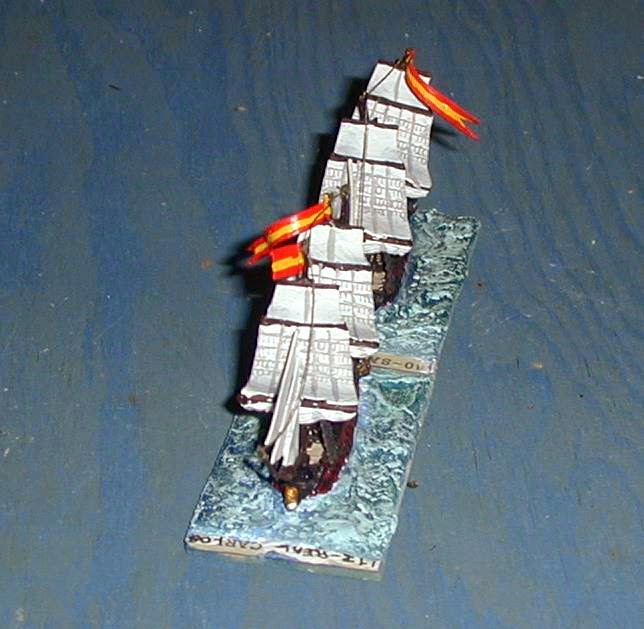 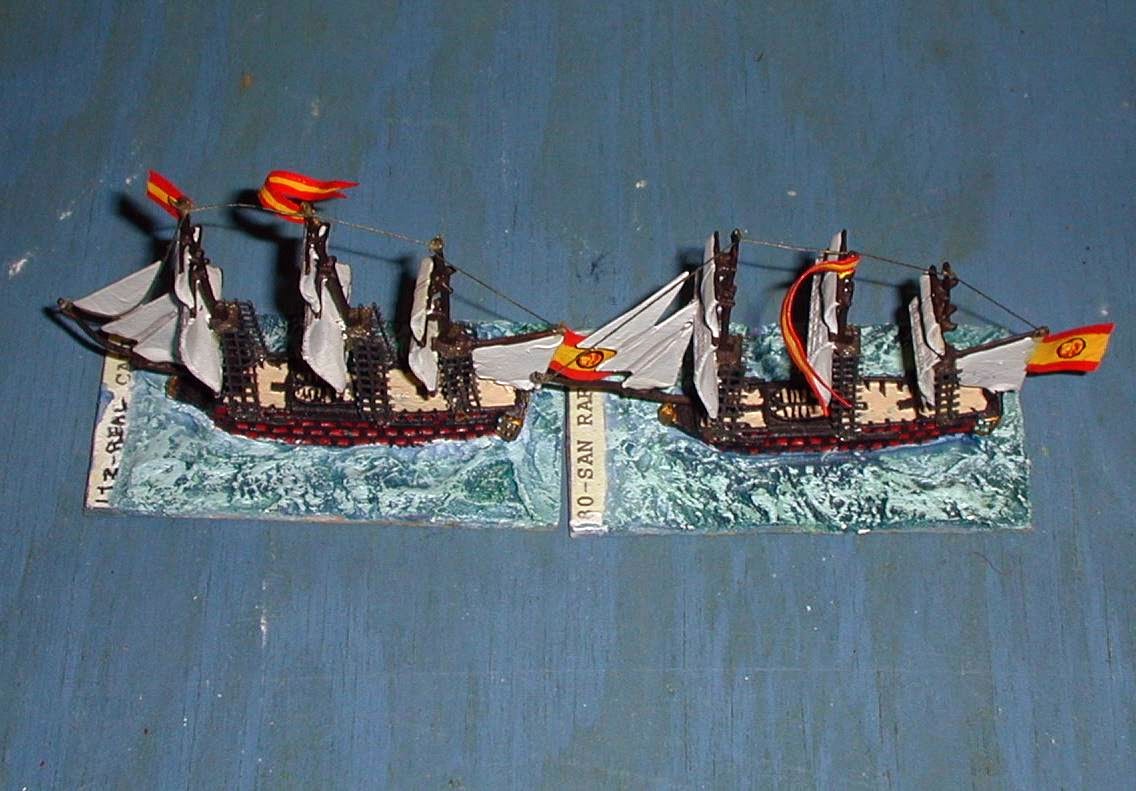 The San Rafael and Real Carlos again. There is something impressive about these tall ships, even in miniature. I have been on several square rigged ships under sail, and they are very impressive from on deck as well... and also very finicky to handle. Tacking across the wind (Jibe) takes a fairly large and experienced crew,. as well as a seasoned captain to avoid the ship being caught "in irons" and failing to make the transition to the opposite tack! 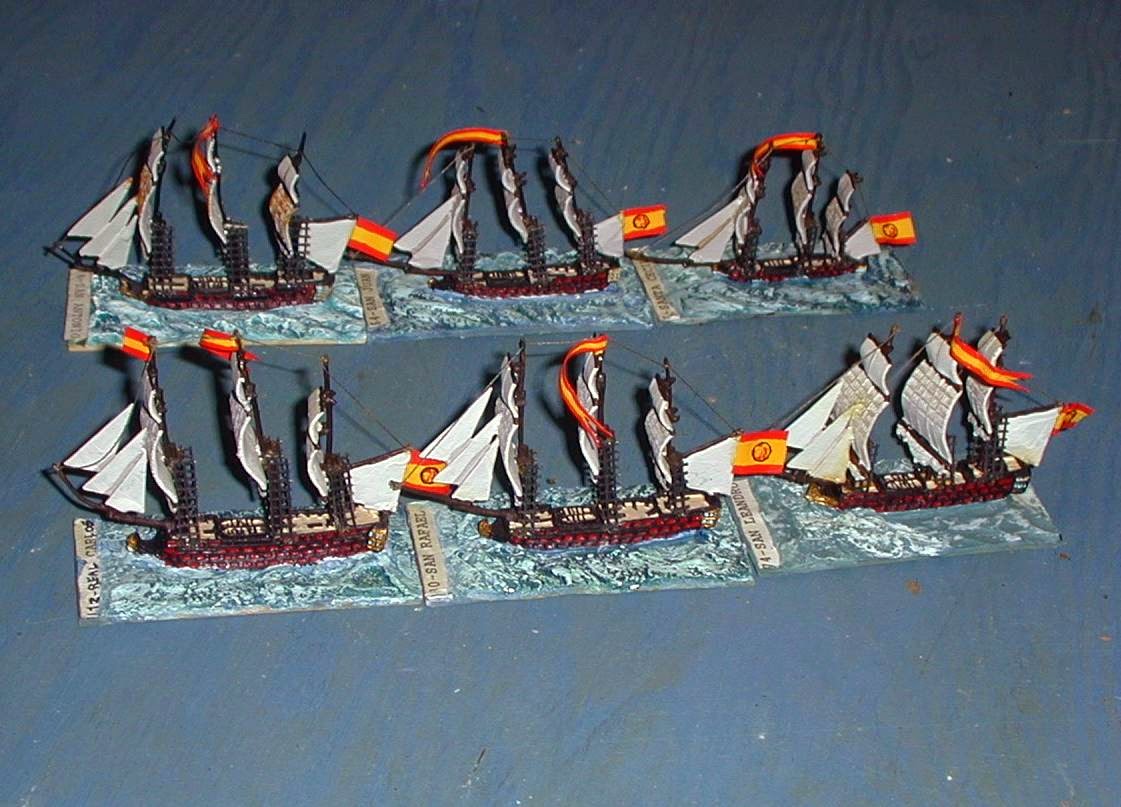 The entire Spanish squadron of 6 ships.  Patrick O'Brian's tongue in cheek Spanish Frigate, the Cacafuego, is oddly missing!  :-)  A great series by the way, if not quite as action packed as the C.S. Forester Hornblower novels. 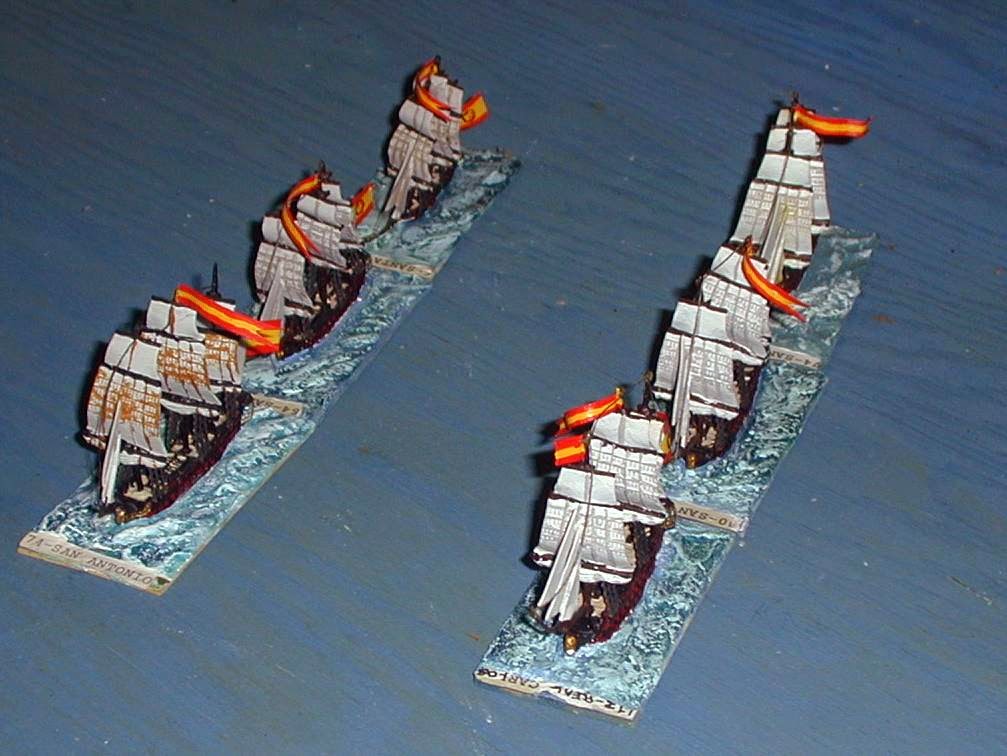 They are a most suitable ally (or foe) to the French ships posted last month! 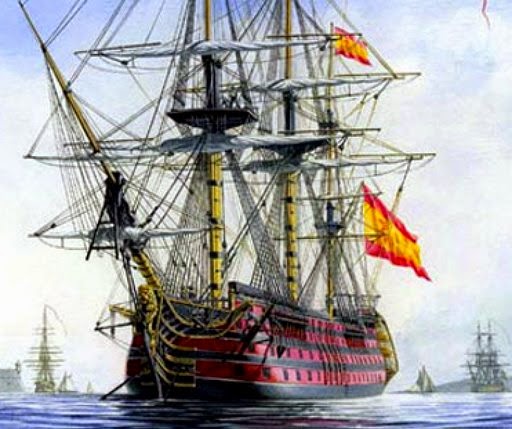 A modern depiction of the enormous  Santisima Trinidad at anchor.