Dice, Slice, computer Mice... and something Nice at a good Price!

I have a quite full wargames project schedule from now until; Historicon 20156 in mid July. We're in the final stages of preparation for our big Snappy Nappy Waterloo "Campaign in a Day" on Sunday, April 26th. I also set and submitted my Historicon games schedule... which is probably more than a bit too aggressive!.As it stands, I'll be running Ligny with Filed of Battle 2nd edition Thursday evening and again Friday AM. Friday afternoon I'll be running a Napoleonic game with Bob Jones' new "Die Fighting II" rules. Friday evening Ken Baggaley and I will be running a "Chariot Wars" era game with my New Kingdom Egyptians vs. his Canaanites, and repeating it Saturday AM. Once we will use Pulse of Battle and once Archon, 2nd edition). Saturday night I'll run La Bicocca 1522 with my own Hostile Realms rules (all rules by Piquet, Inc). In between I hope to look in on the 2-3 Russian Civil War battles Jared will be running with Field of Battle 2nd edition, as well as some Punic Wars games that Jeff Grein is planning, perhaps including one each with Archon 2 and Pulse of Battle as well. The good news - I'll be so busy that I am not likely to buy much while I am there!  Meantime, I have another 200 Prussians to paint in 3 months, along with a small (6 figures) contingent of Marins de la Garde! 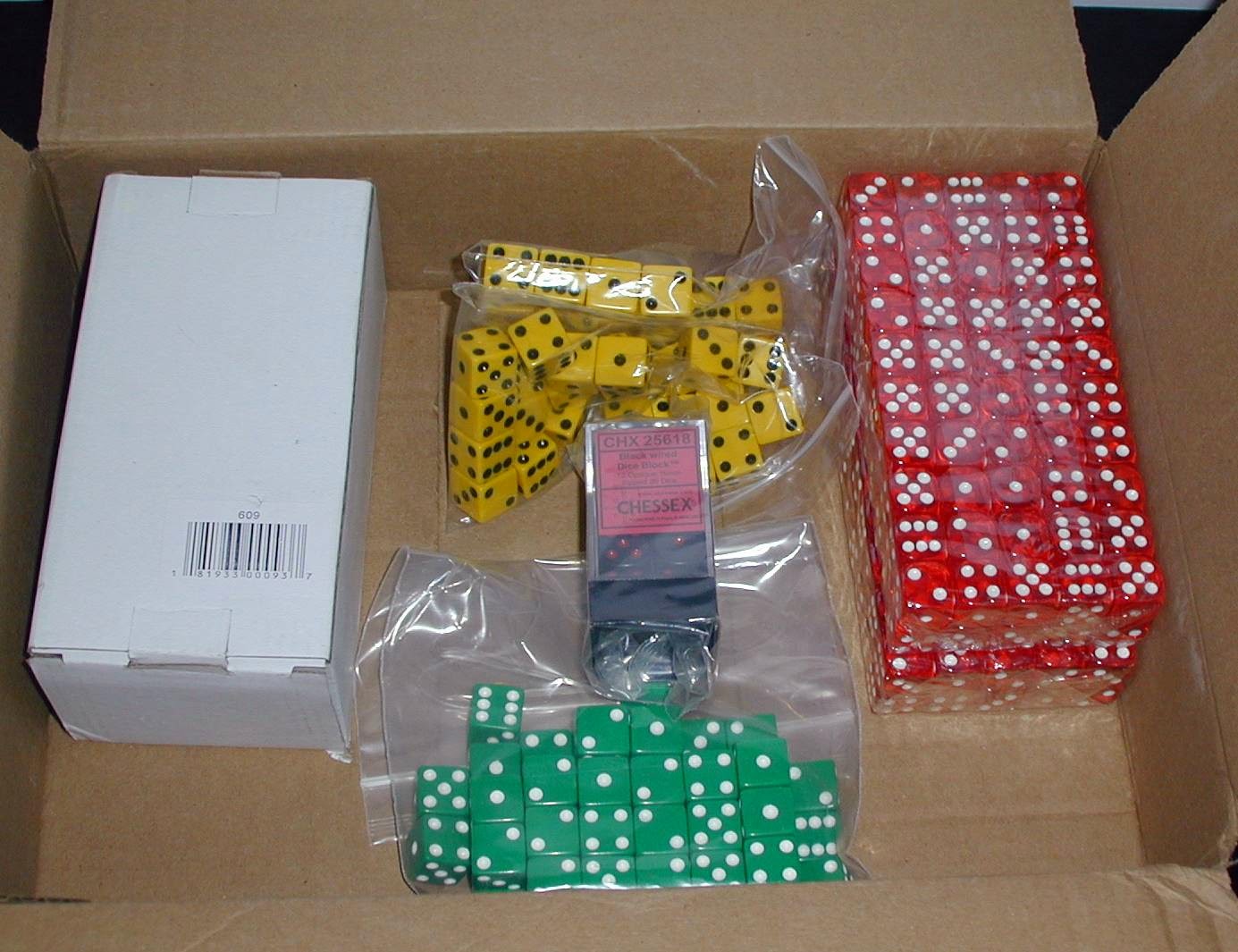 So the here's the "Dice" part of the post title - 200 red "resource" dice, 50 each green and yellow "free" and "command" dice respectively, and a dozen "black dice", all courtesy of Amazon.com, and needed for my Die Fighting II event. 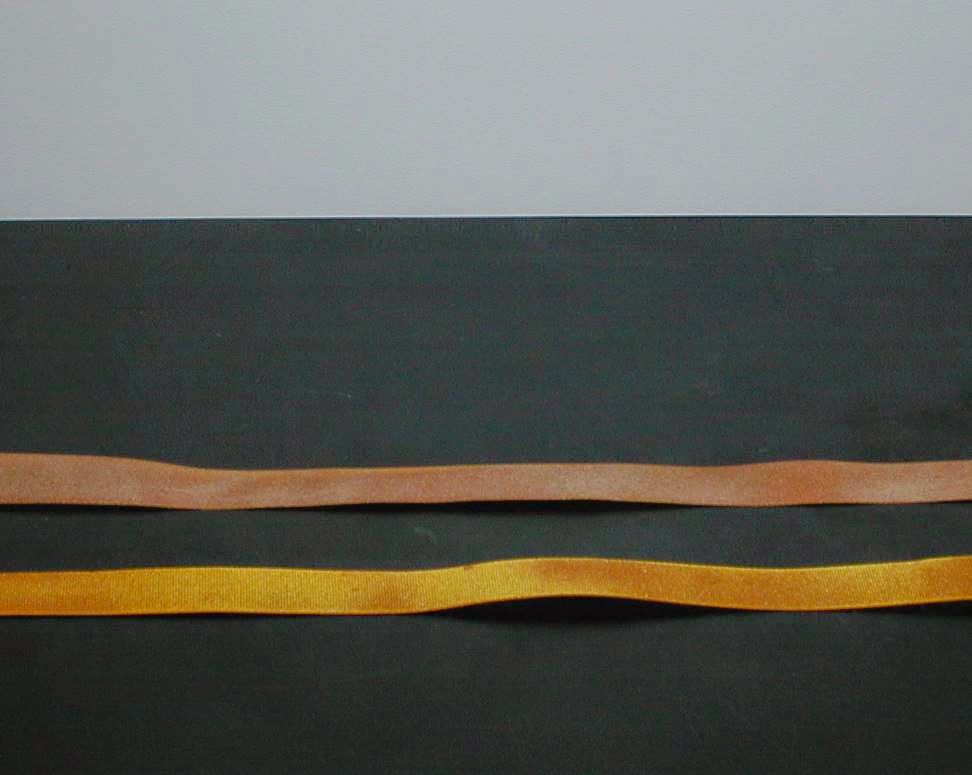 Next is part of the "Slice" part of today's title. The tables for the Snappy Nappy event have a lot of "minor roads", and we needed a way to make a lot of them quickly and cheaply. Everyone who is doing up some tables will do it a bit differently, but I got two rolls of 7/8" wide x 67 yards long heavy cloth ribbon in a golden yellow color for about #$.50 each at the fabric store. I cut them with a carpet knife into 6 foot long sections, and spay painted them a "Terracotta" color, followed by a dusting of off white "Ivory" spray paint. They should do the job, I think. 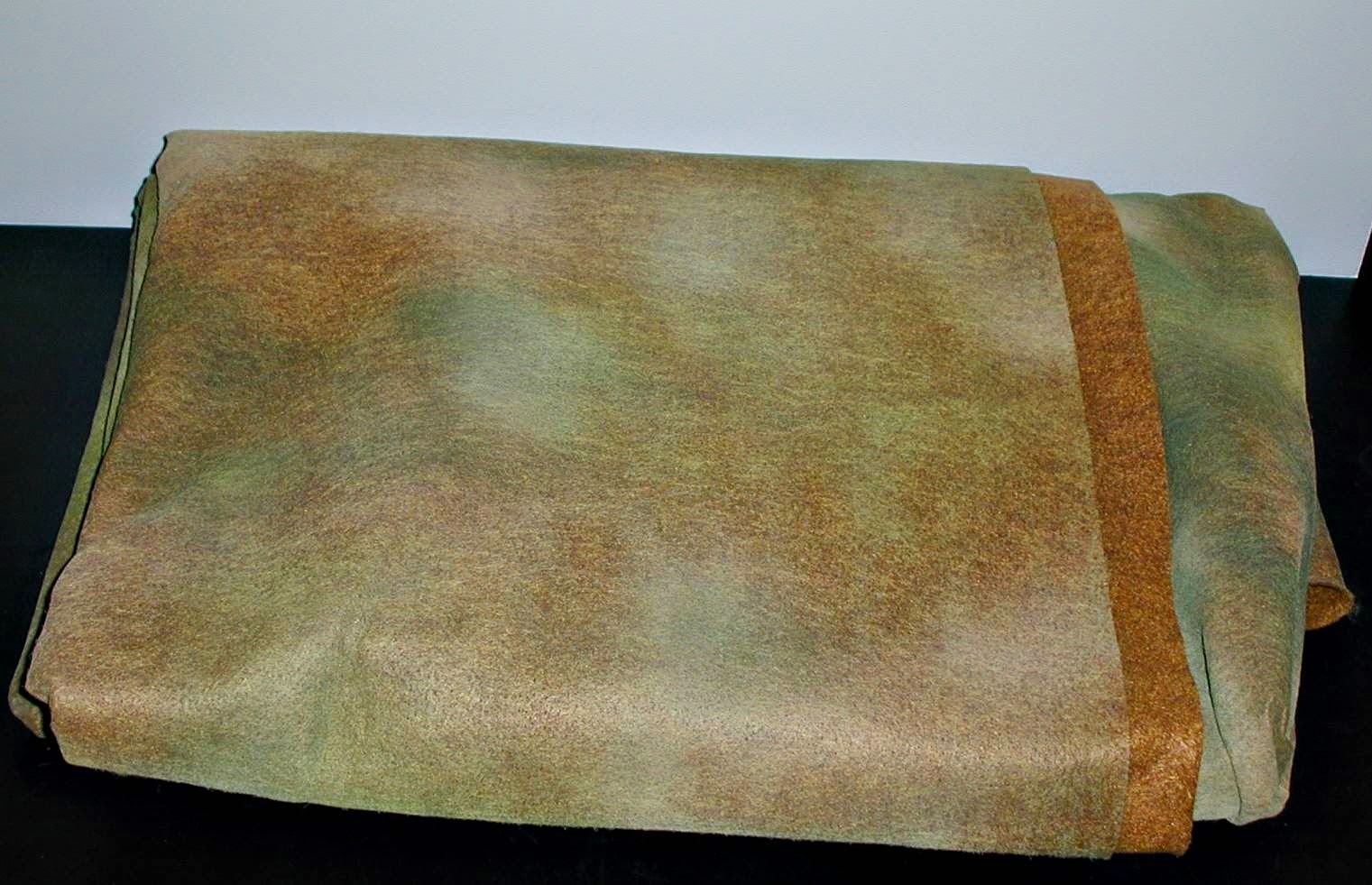 I also need yet *another* wargames table cloth, so while I was at the fabric store I checked out their felt. They had this nice orange-brown heather type 6 foot wide felt - the color on the back of the felt can be seen above. I then took advantage of the (finally!) warm, sunny weather and light breeze yesterday to use my collection of spray paints on it, using light ivory, medium brown, pale yellow, dark green, and light green cans in multiple passes to achieve the desired effect. I also have some 8 x 12" blue felt sheets that I'll cut up into strips for the many rivers that mark the edges of many tables. 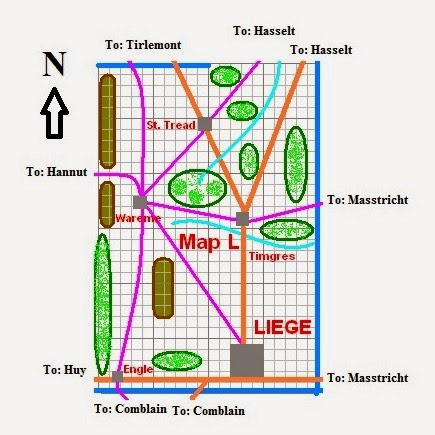 I've definitely been spending a lot of time manipulating my computer Mice - the Waterloo Campaign in a Day will use eleven 4 x 6 foot tables, and each table needs a map such as the above (drawn in MS Paint), and then the individual maps have to work together so the roads, etc all more or less line up. Fun but very time consuming! 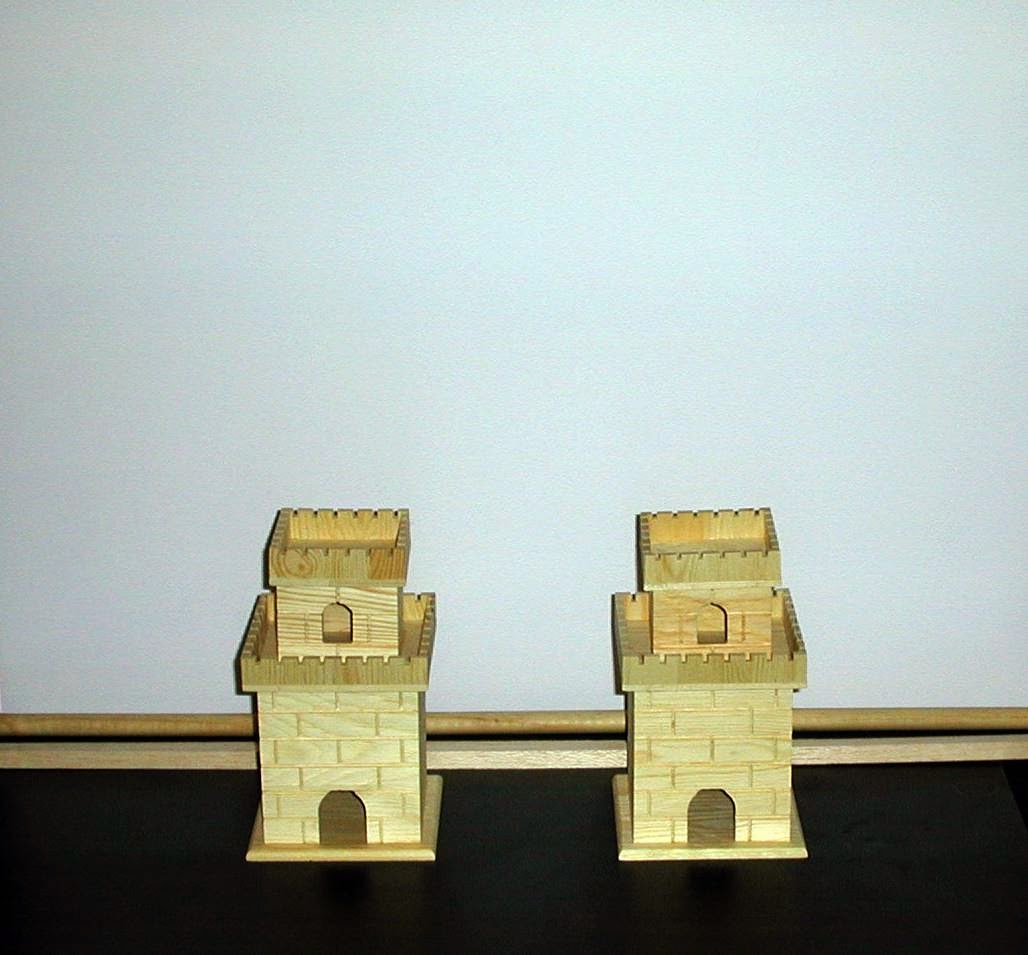 The background here is more of the "slice" - a sheet of white 1/4" thick foam board, some 7/8" dowel, and some 1/2" square balsa wood that I got at the local Michael's craft store. I of course browsed the other merchandise available there, and found these two towers, allegedly for use as Birdhouses. To me, they immediately suggested the kind of "Zigurat" towers that might have formed part of the walls of cities of the ancient middle East. A gateway can easily be made out of foam board to link them, forming a nice backdrop for a Chariot Wars era game. 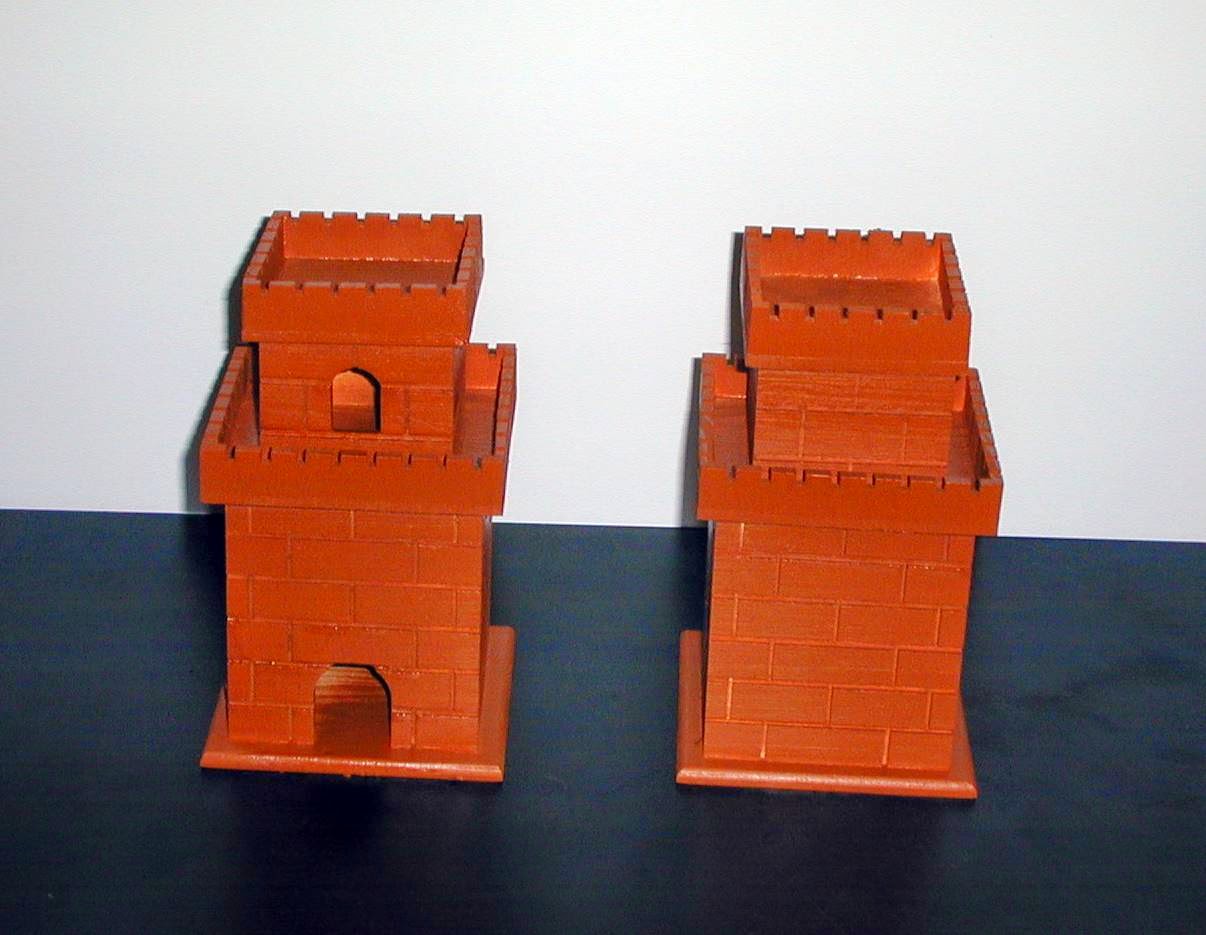 The same Terracotta color that I used on the roads was spay painted onto the wooden structures ( 4" a side at the base, and just under 8" tall, and made out of light pine wood) as base coat. It shouldn't take long to paint the "stones" a light tan or off white color, possibly with some decorative features as well. The brown will show between the stones. The towers are indeed very "Nice",  I think - and at less than $5 each, they were definitely had for the "good Price"!

Well, that's it in a Thrice! It seems that rhyming has become my new Vice...