The Hartford Area Historical Gaming Society Waterloo 200th Anniversary "Campaign in a Day" event is now less than a week away! It will be held at The Portal gaming space of The Time Machine Hobby shop in Manchester, CT this Sunday, April 26th, from 10 AM to 5 PM. The painting of the very few last troops needed for the event will be done in the next few days. The full OOB's as originally proposed will be used.  The layouts for the eleven 4 by 6 foot wargames tables that will represent the Theater of War on the border between France and Belgium are done, as is the umpire's Master Map that links them all together. The initial situation reports to be provided to each of the three armies French, Anglo-Allied, and Prussian, have been written and are ready to go out once the commands are set. Joe, Greg, and I will be bringing the 25mm troops for the event, and, along with James, providing and setting up the terrain on the individual tables. 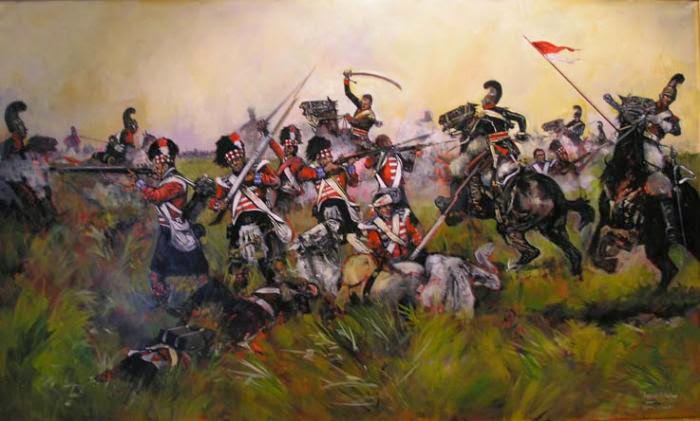 Our final task is to distribute the players to the three armies involved, and then the various individual commands. In addition, one player from each of the three armies will need to act as the C-in-C for that side - Napoleon, Wellington, or Blucher. Ordinarily they will also command the reserves, although it is now possible that one or more of the three the C-in-C's might just focus on their command duties - it is really quite challenging to act as both a Corps commander, having to maneuver your troops strategically and then fight tactical actions, while trying to keep track of both friendly and enemy forces, as well as issue them effective and appropriate Orders, prod them for reports and updates, etc!

To facilitate the process, I have created the following grid, which I will update as new data comes in, and finalize after the event on Sunday. Players in italics are interested but as yet still unconfirmed:

Regardless, it should be a memorable and hugely fun day!  Now to finish painting the few figures of Marins de la Garde that I need to round out the French OOB...

Peter
Posted by Gonsalvo at 9:34 PM