The Slings and Arrows of Egyptian Fortunes 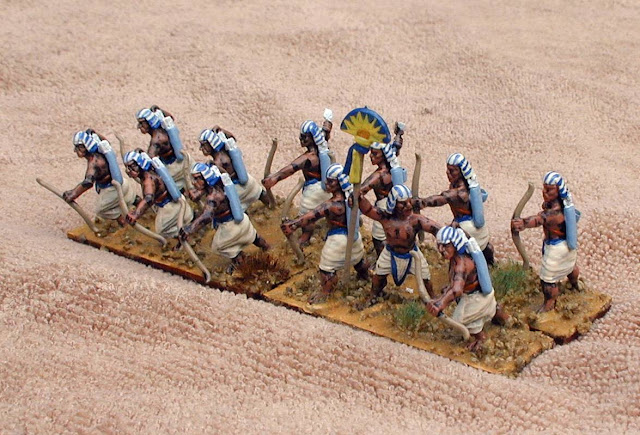 As I was finishing up the rest of my Old Glory Egyptian figures about 2 years ago, Wargames had a big sale on their remaining stock of Essex figures, which they would no longer be carrying. Being a sucker for a sale, and also knowing that My Egyptians could stand some reinforcements if they were to stand up to my large Assyrian army, I picked up about 30 figures for future use. The future having arrived in the form of several planned games this year using my Egyptians, I painted them all up the first half of this month. 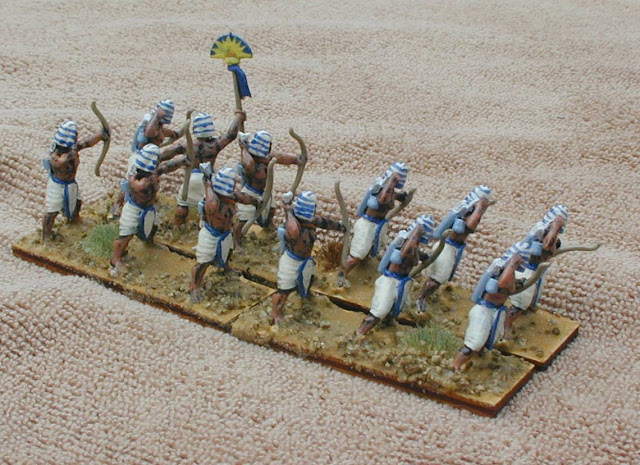 This Medium Archer unit belongs to Division  Seti in my scheme, which has Blue as its distinctive color. 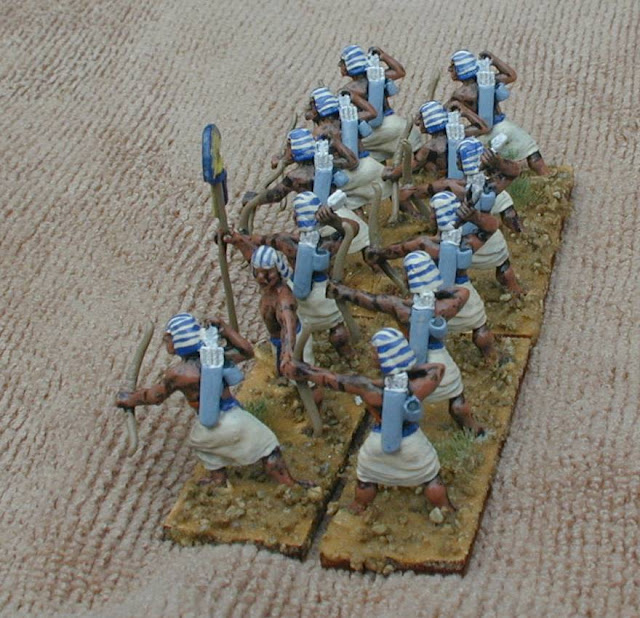 These Essex figures painted up nicely and quickly. enhanced by some Magic Wash. I used a lighter (less ink) version because of all the white and off white in the costume of the figures. 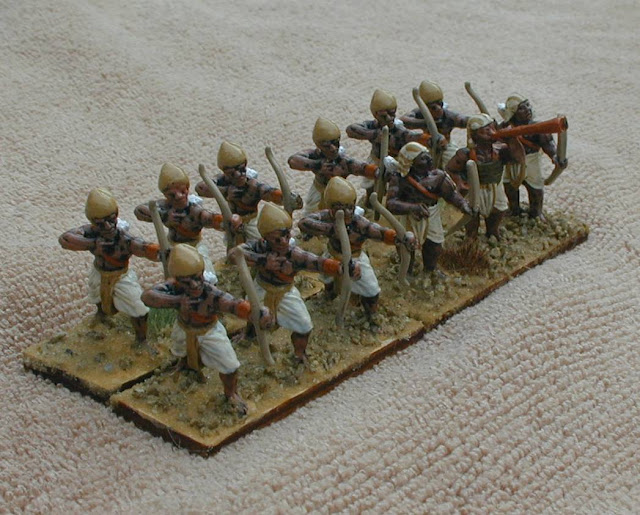 This unit has a different style of Archer dress (filled out with some spare Old Glory figures; being a clearance sale, you never knew for sure how much of any given figure they would have left by the time your order was processed). 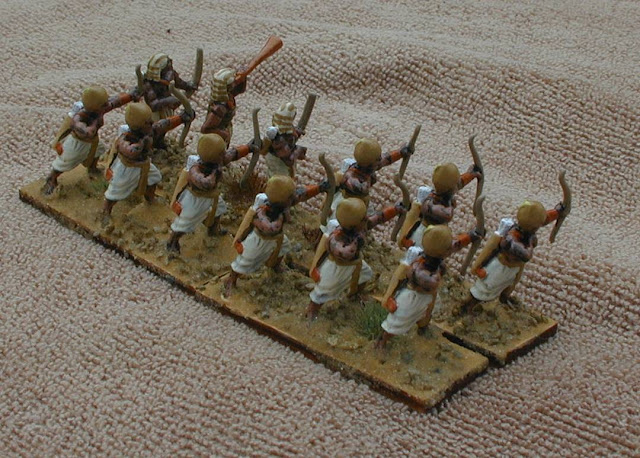 The Essex figures did require the bows and slings to be glued in place (using cyanoacrylate glue), which was kind of a pain! 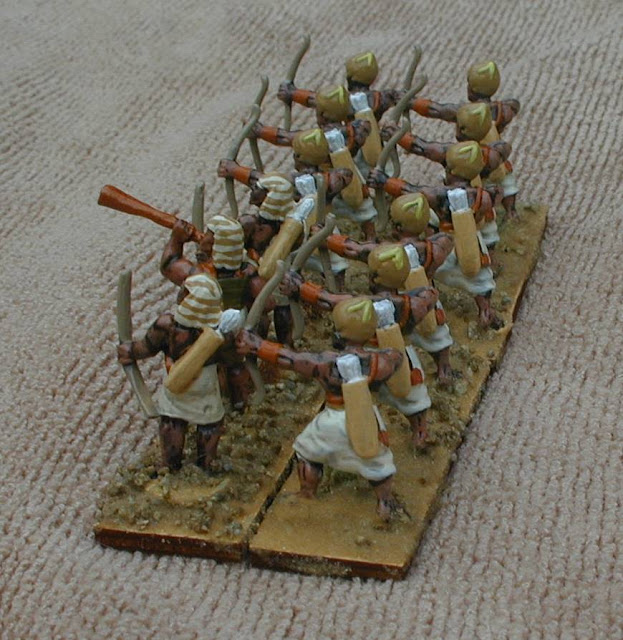 The yellow distinctive color of the unit places it in Division Ra. 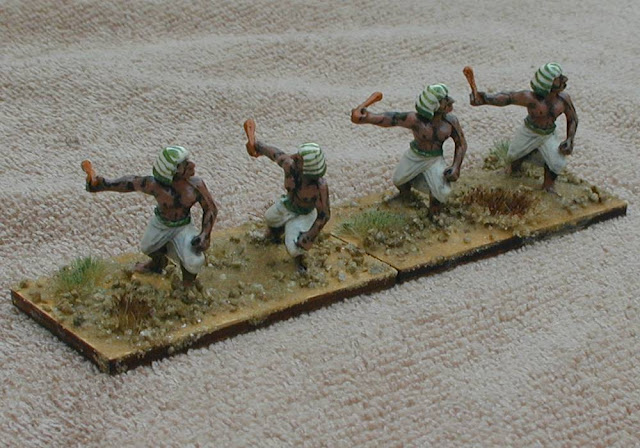 This is a unit of LI slingers, included for variety. 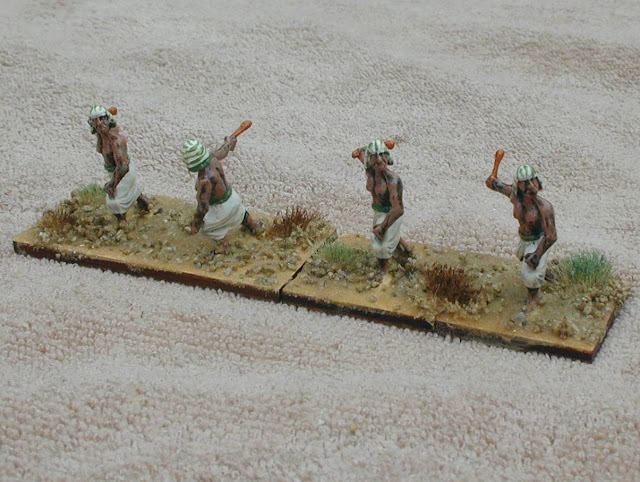 They belong to Division Ptah, which has Green as its distinctive color. 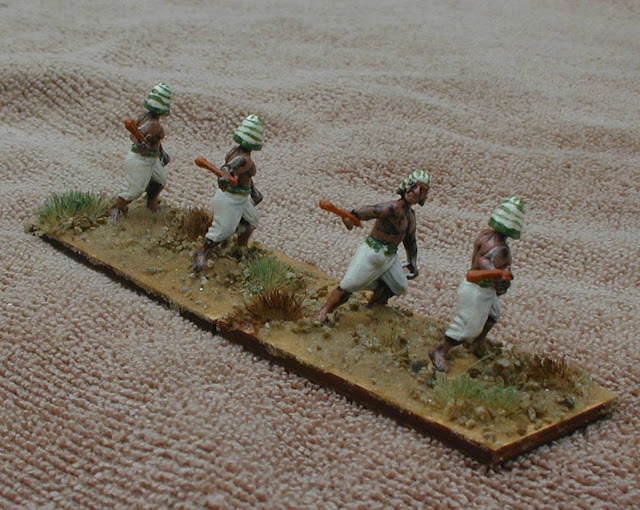 I used some paint dry brushed onto the tufts to bring out "desert tones" to them. 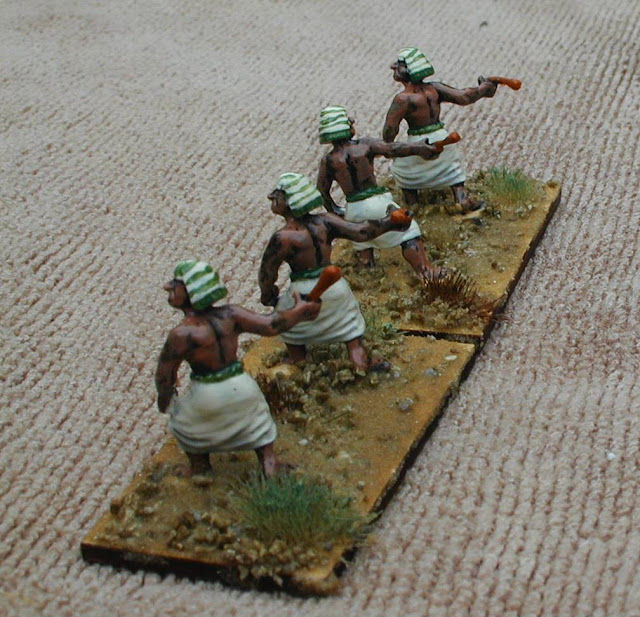 I most rules, the slingers won't fight any different from Light Infantry archers. 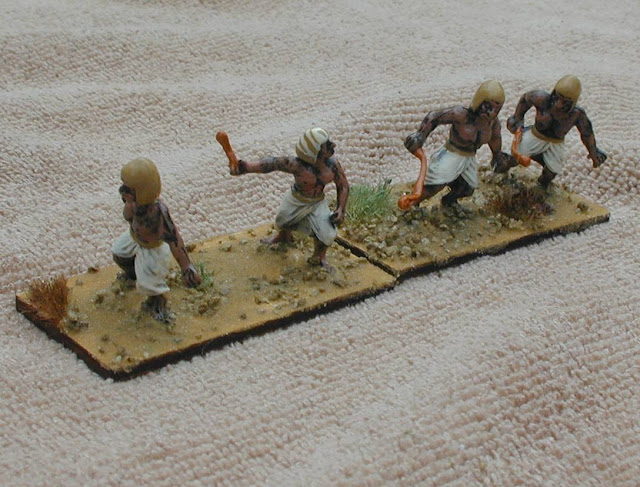 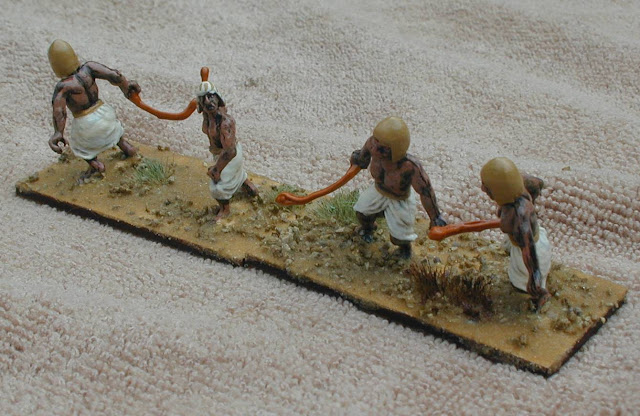 I see I forgot to paint the sling stones - I'll go back and fix that! 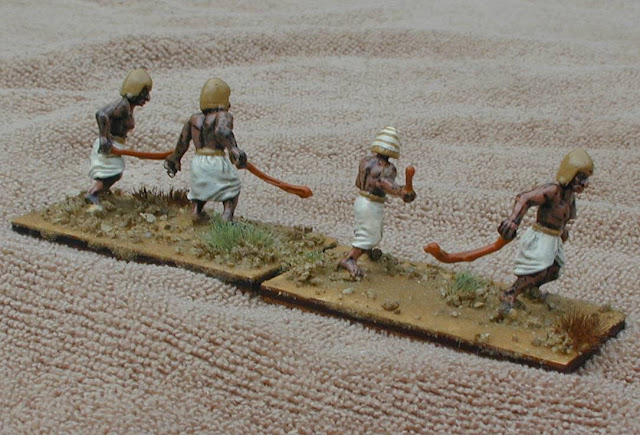 Once again, their yellow distinctive color marks them as members of Division Ra. 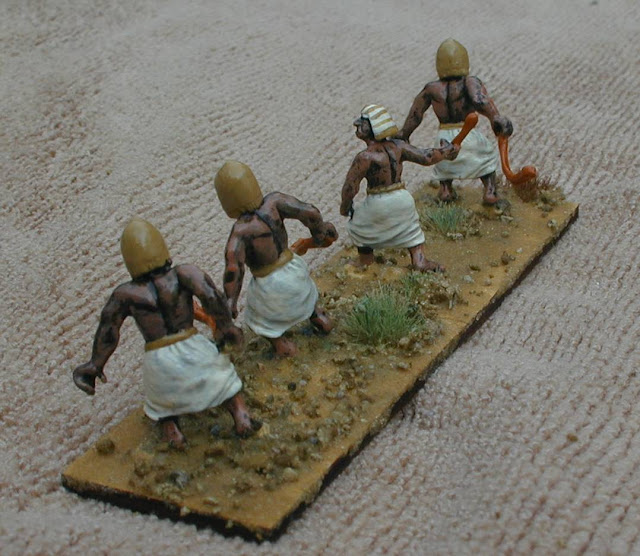 Scenic sand and railroad talus was used for the basing, applied over thinned white glue (after the tufts were glued on and dried). 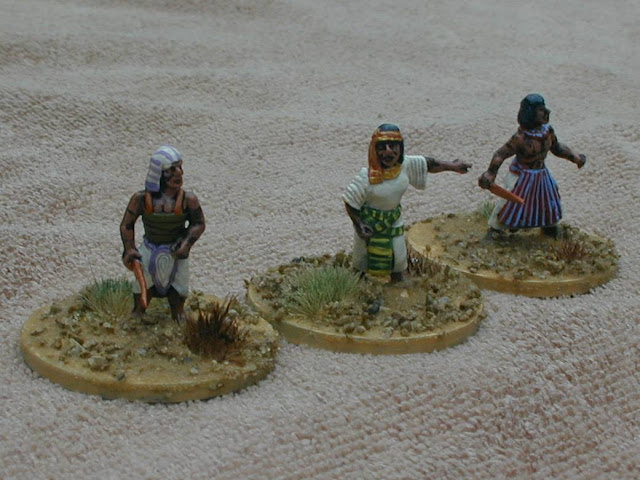 I really needed more figures for generals and "heroes", and that was one of the best things I got from the Essex order. 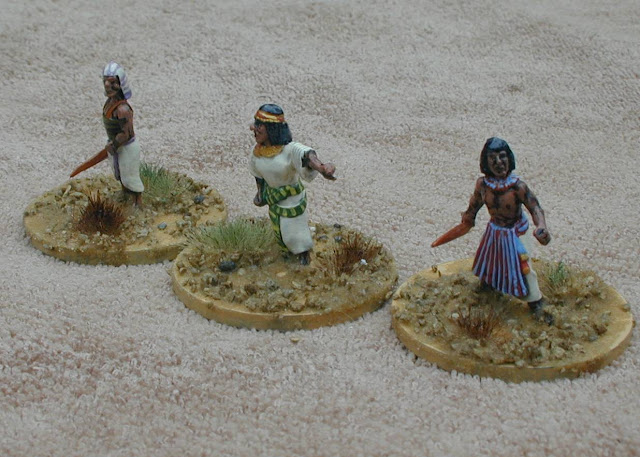 The center figure is an Egyptian "Prince", If I recall correctly. 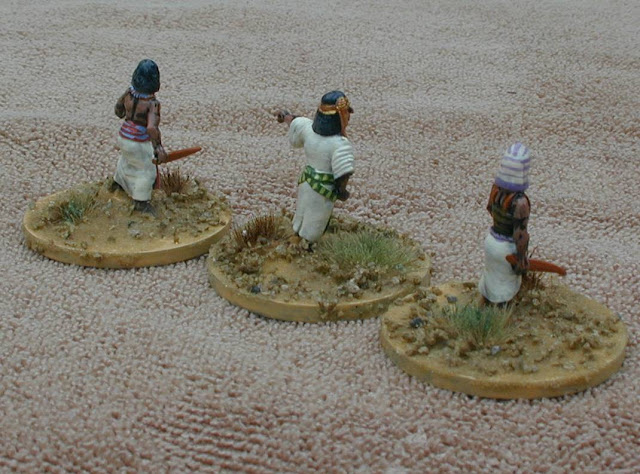 The figure to right here is an officer, and carries a bronze sword. I used light purple for his decorations, figuring that only an upper class person could afford that color, presumably already being made from the Murex snails in the city of Tyre.  He wears crocodile skin armor. 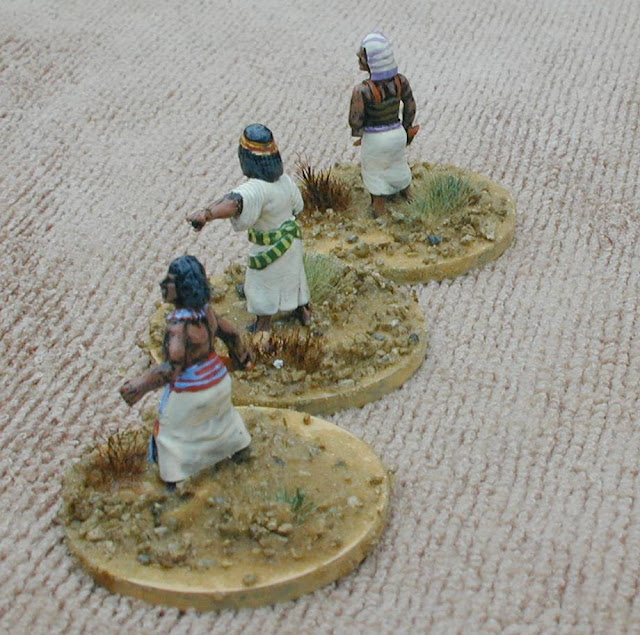 The figure in the foregound is a "General" if I recall correctly. I've given him light blue and red ornamentation, and a heavy neck piece made of copper, carnelian (red), and lapis lazuli (blue).