Yes, we're at it again! This time James is the lead GM and will be using 15mm troops. The game will cover the Winter 1807 Eylau campaign, with each player commanding a Corps. Russ Lockwood's "Snappy Nappy" rules will once again be used (and it looks like Russ himself will once again be a player). James has developed some simple, quick supply and attrition rules to reflect the effects of bitter winter weather. As was the case historically, the French will be caught with their proverbial pantalons down, spread in winter cantonments, being caught very much by surprise by the sudden Russian winter offensive. This is a really unique kind of event, and well worth the trip to participate. Seev the Snappy Nappy label on the side bar for accounts of our previous events - Waterloo 1815, Dresden 1813, and Bavaria 1809.

Sunday, May 1st, 2016, 10am — 5pm
The Portal  gaming space across the street from
the Time Machine hobby store
60 Hilliard St, Manchester, CT 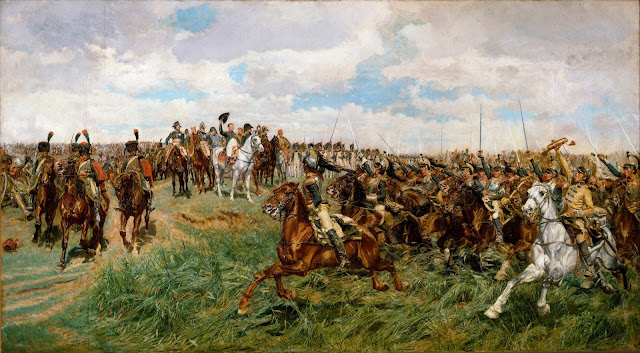 OK, so this is Friedland, 1807; it is a much more inspiring picture than the dreary ones of Eylau!
I actually have a large, framed print of this painting hanging in my study that my late father obtained and framed for me (complete with a light) some 45 years ago.

Using simple and ultrafast rules, each player commands an independent corps of troops maneuvering across multiple gaming tables in a giant multiplayer one-day re-fight of the entire Napoleonic multi-week campaign. All troops provided!
Re-fight Napoleon’s 1807 Winter Campaign No experience necessary (ages 15 and up)


Sponsored by:
the Hartford Area Historical Gaming Society (Yahoo Group: HAHGS)
Posted by Gonsalvo at 9:57 AM