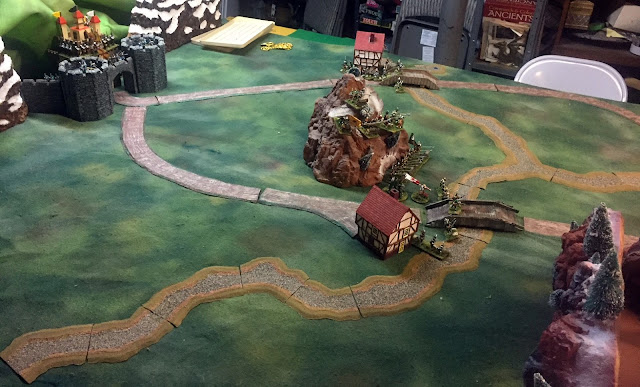 The scenario originally called for concealed deployment of the Tirolese. That seemed impractical for a one on one playtest game, and after the playtest, I decided it was an unnecessary complication anyway. Here, John has deployed a lot of Tirolese around the final obstacles on the road to Biersteinburg - the village of Schpaz (near), the Arlberg mountain, and the village of Achenfuss (far). 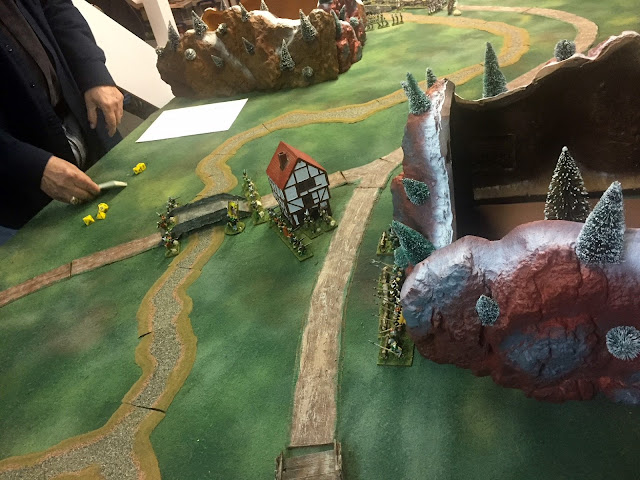 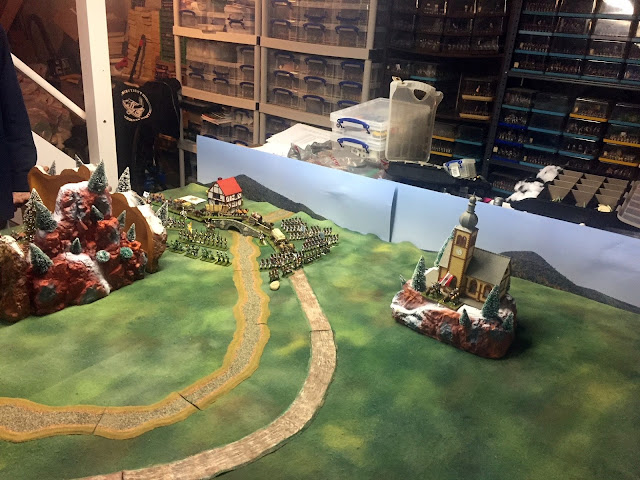 There is also a unit of Tirolese Landsturm in the mountaintop village of Hofbrau, and some Schutzen in the Brennerberg mountains.

Pretty much "hidden" anyway, when placed within the "hollow hills"! 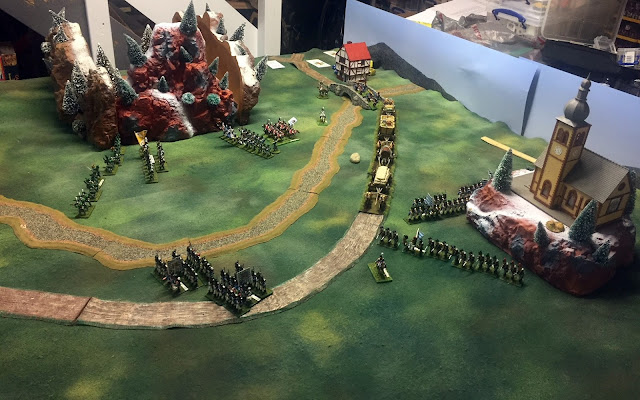 The Baden brigade advances swiftly on the opposite bank of the river, rounding the Brennerberg, as the occupying Schutzen seem likely  make a run for it rather than trying to harass the enemy advance. The Bavarian brigade sends half of its men ahead of the wagons, and have divert to flush the Landsturm out of Hofbrau. This triggers off an artificial avalanche let loose by the Landsturm, severely damaging the Bavarian Jagers, driving them back. It takes most of the rest of the game for them to rally and reform, so shaken are they by the hail of logs and boulders that rolled down the slopes and through their ranks. Fire by the remaining Bavarian units eventually eliminates the garrison, but it takes time! 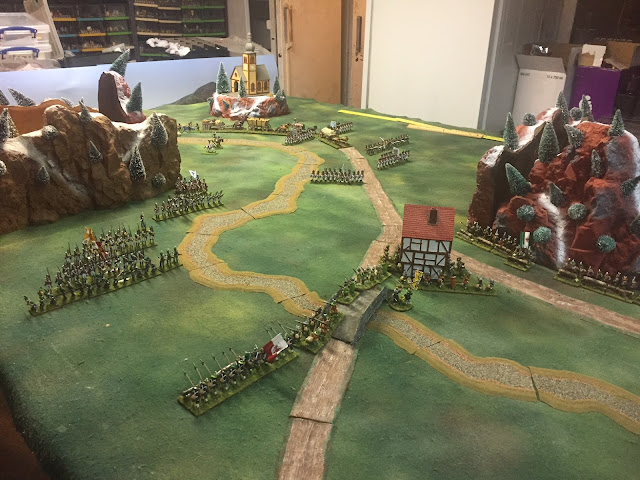 The Baden brigade cuts off the Tirolese Schutzen company exiting the Brennerberg, and advances on the Dreibruck bridge, and the key village of Mittleschmertz. The Bavarians and the Wagons can be seen advancing cautiously towards the Greissenberg mountains, wary of further avalanches. I cleverly placed my one artillery battery behind the last wagon.... where it was all but useless and played no role in the battle at all... duh! 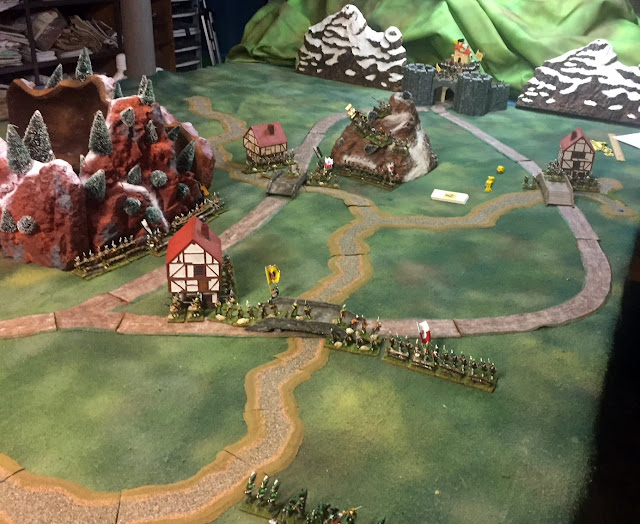 There are still plenty of Tirolese remaining between the wagons and the Fortress! 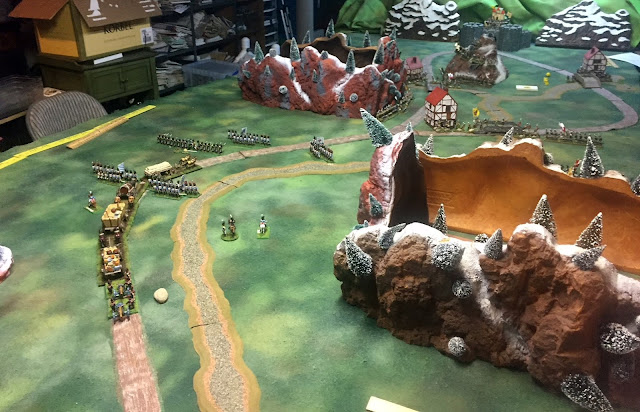 "She'll be coming round the mountain when she comes... " 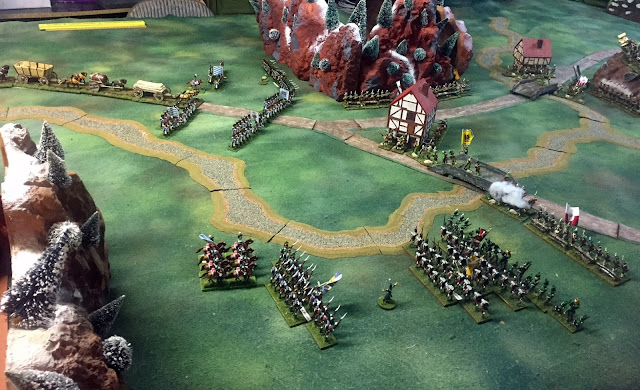 The wagons pull up just outside of Avalanche range, whilst the Bavarians try to flush the Tirolese out of Mittleschmertz and the Greissenberg. In the near ground, the Baden Brigade attempts to open the Northern road across the Dreibruck bridge. They have the support of the one Cavalry unit available. 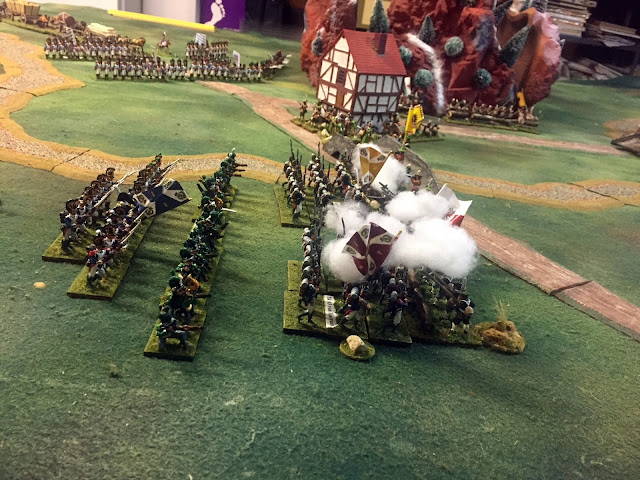 The Badeners and Tirolese exchange fire, and then close to hand to hand action. The polearms of the Landsturm are tough in melee! 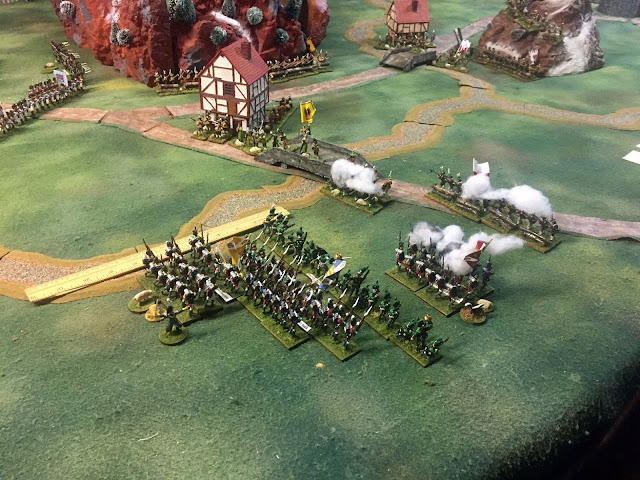 Aftermath of the first Baden attack, which goes... bad-ly. 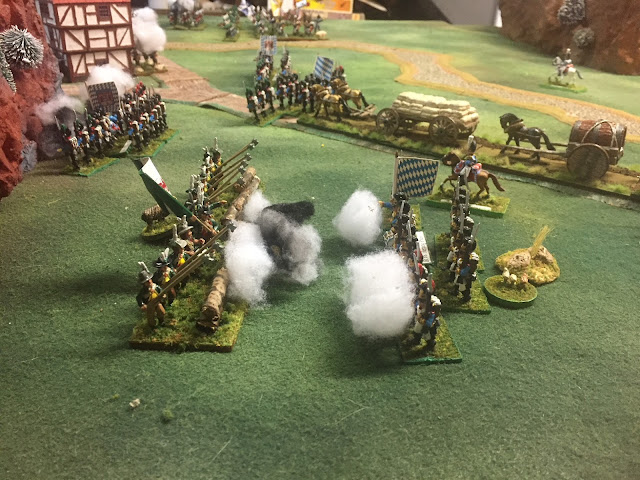 A unit of TIrolese Landsturm, having disordered some Bavarians with Another Avalanche, takes advantage of some favorable cards and initiative rolls to descend from the mountains and  try to close with an "unloaded" and battered Bavarian line battalion. 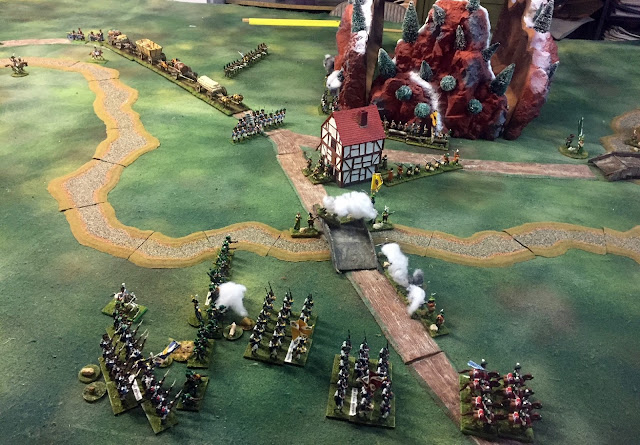 Maneuvers around Mittleschmertz... note the Bavarian Chevau-legers trying to get behind the Tirolese line; those rifle armed Schutzen shoot well, but are pretty much dead meat if cavalry catches them unloaded and in the open! 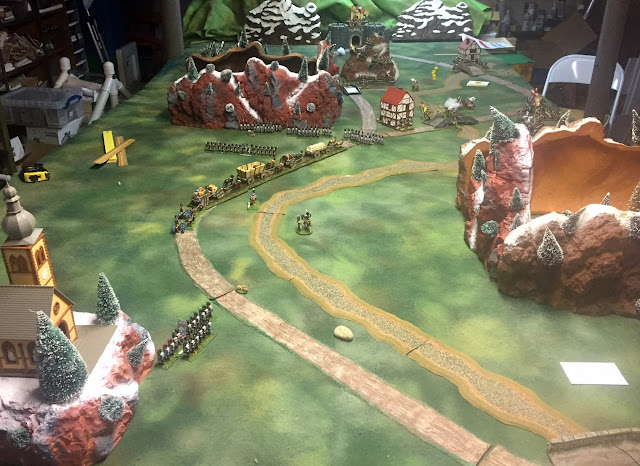 Overview of the battle. The Schutzen in Mittleschmertz are giving far better than they take, and the wagons dare not try to advance past the Greissenberg mountains until they are cleared of Avalanche wielding Landsturm. The Tirolese ring the Sturmglocke, summoning reinforcements! 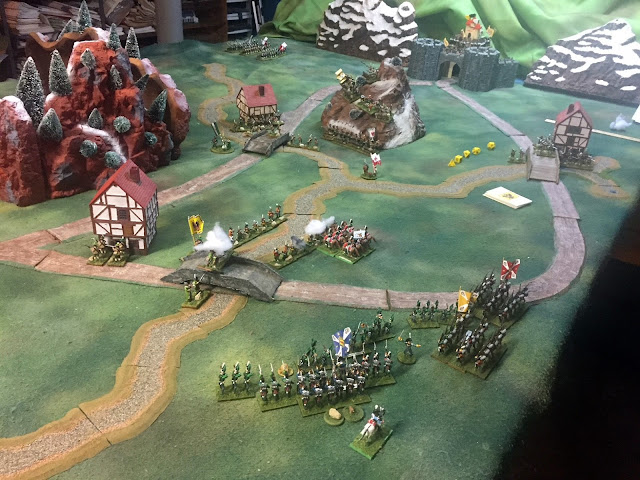 "That's gotta HURT!" the Bavarian Chevaulegers ride down some Schutzen, and the Baden brigade looks ready to clear the Dreibruck route. 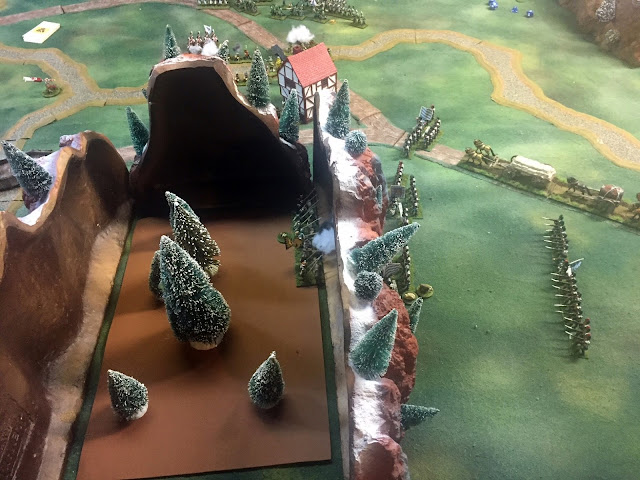 The Bavarians have eliminated several units of Landsturm in the mountains, but still have not cleared the Greissenberg, nor eliminated the garrison of Mittleschmertz, holding up the forward progress of the wagons. 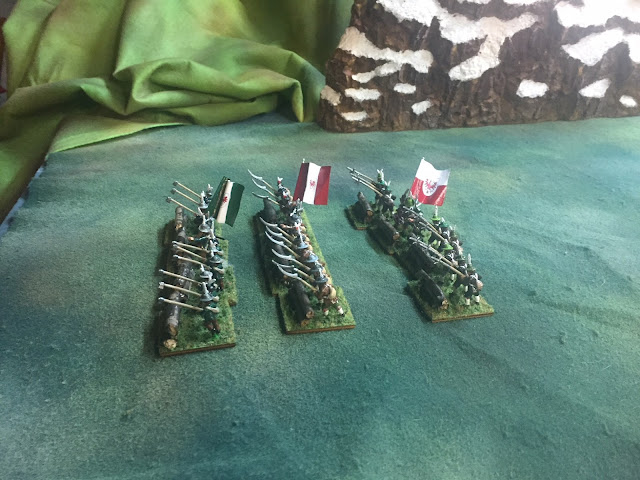 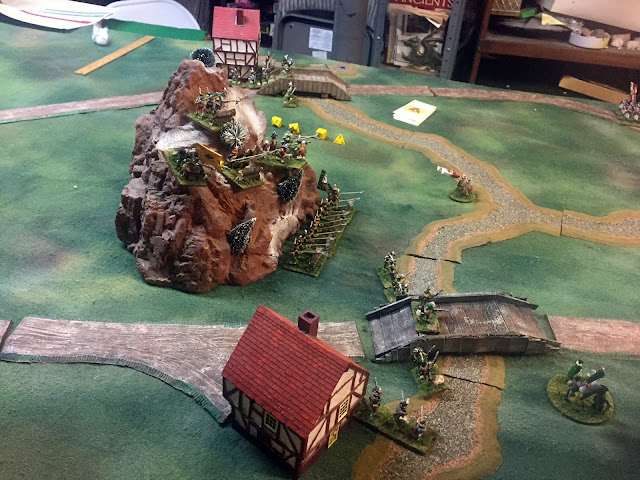 More Tirolese still await along the route to the Fort, though. 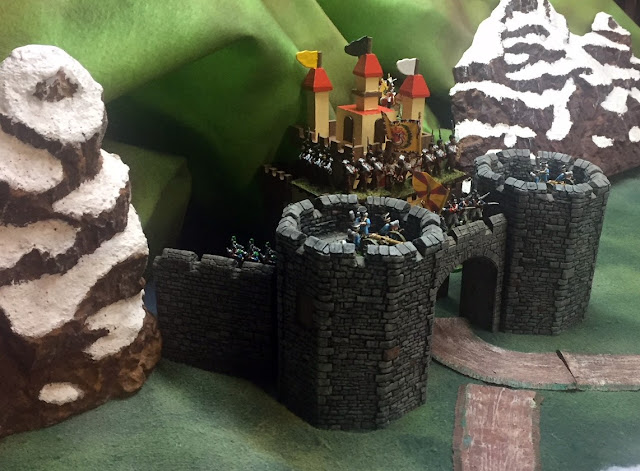 The garrison of the fort; with no friends yet within 36", they cannot leave to assist the approaching convoy.


At this point John conceded the game, although a 3 MP lead is nothing to bank on in Field of Battle. ( I also had not much time left before I had top take the Empress out to dinner as well!) We felt we had learned what we needed to from the playtest, and made several changes, reflected in the scenario posted earlier, the most important being decreasing the UI per unit of Schutzen from 3 to 2, and the Landsturm from 4 to 3. That will decrease the staying power of the Tiorese... but they can summon more with the Sturmglocke (and quite possibly in the rear of the Confederation troops, too!) , and limits the number of MP's lost when a unit crumbles. I think this game will work quite well at Historicon, after applying the lessons learned from this game. Thanks again to John for playing and helping me flesh out the game!
Posted by Gonsalvo at 8:56 PM