Scenario Book for Field of Battle by Piquet 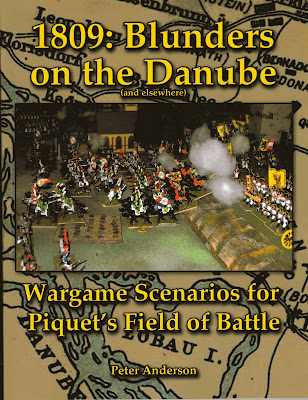 
This book contains 23 scenarios for use with Brent Oman's Horse and Musket era rules, Field of Battle, by Piquet.     *  = report of this battle can be found elsewhere on this blog

1) Sacile: April 16. Prince Eugene's first battle, where he was defeated by Archduke John. *
2) Raszyn: April 19 Poniatowski's Polish troops, with Saxon allies, try to delay Archduke Ferdinand's advance on Warsaw. *
3) Teugen Hausen: April 19 Davout's 3rd Corps advancing from Ratisbon must defeat Hohenzollern's Austrian III Corps to reunite with the main army and avoid destruction by Archduke Charles *
4) Abensberg: April 20. The Emperor Napoleon arrives in Bavaria, and the momentum shifts decisively to the French and their allies! *
5) Eggmuhl: April 22 Napoleon attempts to trap the retreating Austrians against the Danube. The Austrian rearguard must delay the French , and then make good their own escape. *
6) Neumarkt; April 24 Austrian general Hiller turns at bay and chastises the pursuing French and Bavarians under Marshal Bessieres. *
7) Grochow: April 25 Prince Poniatowski leads his Poles on a raid across the Vistula upon the Advanced Guard Division of Austrian General von Mohr.
8) Ebelsberg: May 3 Massena's troops attempts to destroy the Austrians of Hiller's command before they can retreat across the River Traun. *
9) Battle on the Piave: May 8 Prince Eugene surprises Archduke John by making a bold crossing of the rapidly rising River Piave. *
10) Tarvis: May 17 Prince Eugene and the Army of Italy come across the weak Austrian VII corps under Albert Gyulai. Despite their strong position, the Austrians are swept from the field. *
11) Aspern-Essling Day 1: May 21 Overconfidence and reliance upon a rickety bridge leave the French fighting for their lives along the Danube. *
12) Aspern-Essling Day 2: May 22 Unable to snatch victory from the jaws of defeat, Napoleon is ultimately forced to retreat back across the Danube.
13) Gospic: May 21-22 Marshal Marmont attempts to chase the Austrians out of Croatia.
14) St. Michael: May 25 Johann Jellacic's Division is under orders to withdraw from Styria, but Eugene catches up with him and goes immediately to the attack!
15) 2nd Battle of Bergisel: May 29 Tyrolean Rebels, including Andreas Hoffer, harass Deroy's Bavarian Division near Innsbruck.
16) Klagenfurt: June 6 Chasteler's command must withdraw from the Tyrol. They and their baggage must pass by the walled town of Klagenfurt. French GD Rusca isn't planning to make it easy for them! *
17) Raab: June 14 Prince Eugene faces Archduke John for the third time. With his army filled with large numbers of the untested Hungarian Insurrectio, John holds a strong defensive position. *
18) Graz: June 26 “Une contra Dix”; Ignaz Gyulai attempts to destroy the isolated 84e Ligne; the result is one of the most celebrated feats of arms by the French Infantry. *
19) Wagram: July 6 Napoleon and the Archduke Charles square off in what is the largest battle in the history of Europe to that point. *
20)Wagram: Davout’s Attack The action on the French Right Flank.
21) Wagram: Rumble on the Russbach The central portion of the battle along the Russbach stream.
22) Wagram: Crisis on the French Left Massena and Bernadotte attempt to stem the initial Austrian attack... without using up too many of the French reserves!
23) Znaim: July 11 The French catch up with the retreating Austrians, and battle is joined while peace negotiations proceed apace even as brave men on both sides fight and die. *