﻿The second battle the Hofkreigsrat developed for Historicon 2009 was Raszyn, fought between Poniatowski and the still forming army of the young Grand Duchy of Warsaw, with some Saxon support, against Erzherzog Ferdinand's invading Austrian Corps. Poniatowski, who was significantly outnumbered, chose a strong defensive position behind the Mrowa; it's marshy banks made the river impassable except at the bridges, which in reality were more like causeways. Although the Poles had the support of a few Saxons, there were no French troops present whatsoever.  We playtested this battle twice and ran it at Historicon once, on Thursday afternoon, with Barry as the "Rat" acting as GM. The first pictures are taken from the play test games. The scenario, which was adapted from that by Keith McNelly for Volley and Bayonet, will be in the scenario booklet. 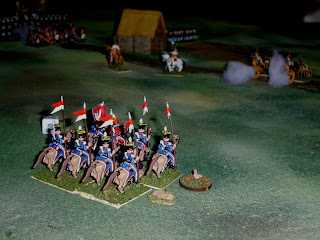 Near the start of the game: Polish Uhlans (lancers), stationed on the far side of the stream to harrass the Austrian advance, take losses and fall back as a result of accurate fire by an Austrian Cavalry battery. Note the "chicken" denoting that the cavalry are "Out of Command"... sort of like shaken or disordered in other rules sets.

Because of the nature of the battlefield, this scenario usually results in some initial delaying actions by the Poles, and then becomes three inter-related efforts to force the crossings at Jaworowo, Falenty/Raszyn, and Michalowice on the Austrian right, center, and left respectively. The Austrian attackers arrive on the scene first opposite Jaworowo, then Raszyn, and finally Michalowicz. 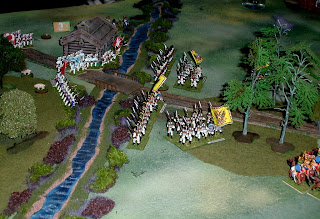 On the Austrian right flank, the bridge at Jaworowo is being hotly contested!  Note the overturned Polish officer stand in the background, a victim of a failed Command Group Leader survival test. Note also the pigs, etc, once again indicating "Out of Command status"... that's one kind of Bacon you *don't* want to bring home! 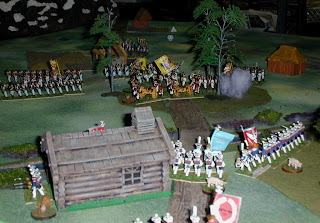 View from Jaworowo towards the Austrian assailants. The 13th Polish Line regiment (with light blue flag on the reverse) was unique in having white uniforms with light blue facings - generously supplied from captured Austrian stores! 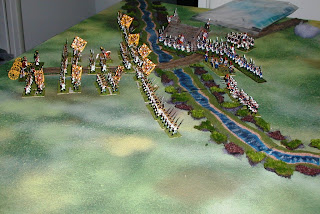 I love the look of massed Austrian Ordinarfahnen on the battlefield! These units are all mustered from my old Minifigs, and the flags were hand painted. Action on the Austrian left flank at the Michalowice crossing. 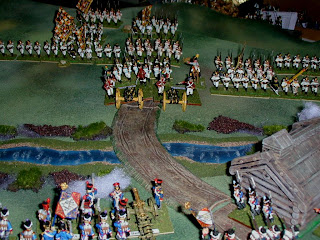 At Michalowice, artillery batteries stand off at the causeway. We didn't have enough Poles for all the units in this one then (we do now!), so some French  (by Foundry) had to stand in. 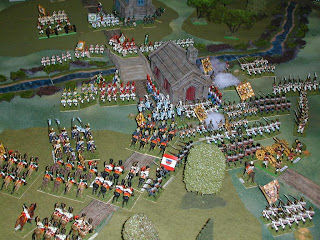 Austrian attackers converge on Falenty in the Center; Saxon reserves guard the bridge and the village of Raszyn beyond. 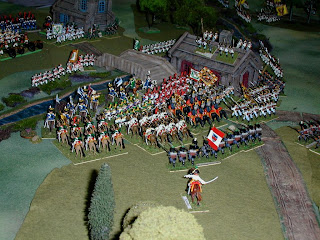 Massive Cavalry charge by the Austrians as they emerge from the road through the woods; The village of  Falenty is on the near side, while Raszyn is on the far side of the marshy-banked stream. 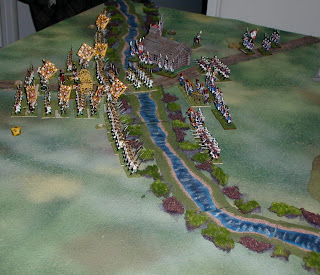 The Austrian left flank command tries to force the bridge at Michalowice against staunch Polish opposition! 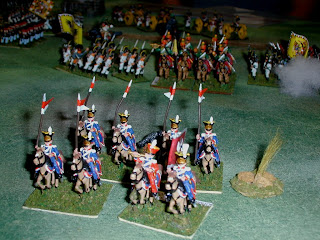 Early in the game the Polish lancers have routed an Austrian battalion (seen retreating in the background before themselves being routed by the Austrian Hussars. Still, their antics have diverted Austrian units from advancing upon the river Mrowa. The marker with three "rocks" on it indicates the cavalry have lost 3 Unit Integrity; as cavalry units in Field of Battle generally only have 3UI, that reduces them to zero UI and any unit reduced to zero UI immediately routs (they are removed outright if they reach -1 UI). 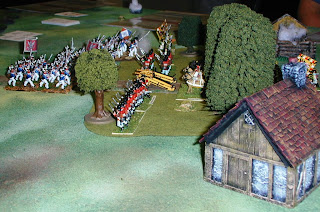 The right flank Austrian advance upon Jaworowo is checked by a bold (some might say foolhardy) sortie across the bridges by the aggressive Polish defenders. Fire from 2 Grenz battalions and an Austrian cavalry battery don't seem sufficient to deter the Polish charge! 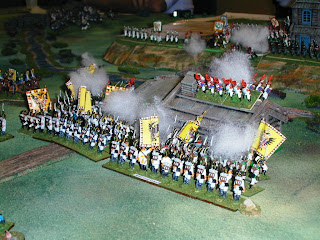 "I'll huff, and I'll puff, and I'll blow your house down!", said the big bad White Wolf to the Polish Pig who had built his house of sticks! 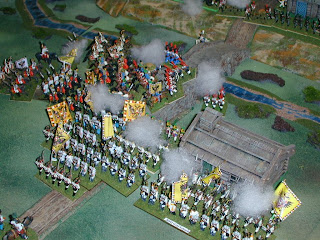 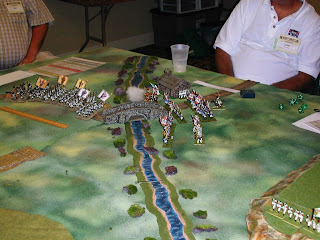 Masses of Kaiserlicks ready to storm the bridge at Michalowice, while the defenders have prepared a warm reception! This time the white coats are Thomas' beautifully painted Front Rank figures. 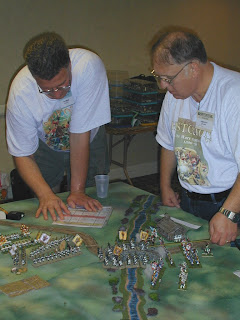 HK-Rat Thomas Kinstler assists a player in figuring out the results of combat, referring to the FoB Summary sheet. The whitecoats launch a determined if somewhat impetuous assault upon the bridge on their far left flank at Michalowice. 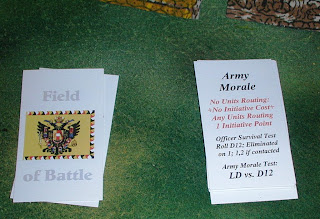 How a game of Field of Battle often ends - turning THIS card when your army is out of Morale Points is NOT a good thing!  This is not an easy scenario for the Austrians to win - they have to advance aggressively, something their relatively poor command system doesn't make easy, and yet avoid taking excessive casualties. That usually means trying to get their superior artillery into the action to soften up the outnumbered Polish defenders - but that often spurs Polish action to disrupt the deployment of the guns. This is an excellent scenario for 3 players on each side.
It's been a little long between posts, but I spent much of this past weekend finishing all the text and the final maps for the Blunders scenario book; now just needs final editing, then layout and printing. In print -  maybe July 2011?
Good gaming!
Peter
Posted by Gonsalvo at 12:40 AM