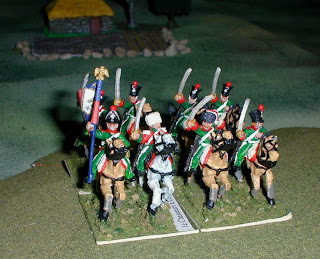 This is the 1e Regiment of Chasseurs a Cheval, wearing its scarlet facings. The trumpeter is dressed in reversed colors, as was common (although even more fanciful styles were not rare) prior to the introduction of the boring Imperial Livery in 1811. He has adopted a dramatic white fur colpack as his headdress, and as usual in the French army is mounted on a white or grey horse. 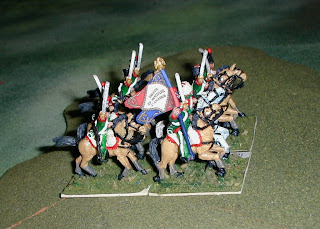 This view of the 1er Chasseurs shows their sheepskin horse furniture with regimental colored "wolf's teeth" border. Sheepskins were black for the trumpeters, white for everyone else. The standard is by GMB, however I believe only the Dragoons had swallow tailed flags, although I could be wrong. This handsome unit is made from Sash and Saber figures. 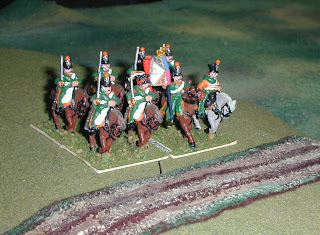 Next up is the 13e Chasseurs a Cheval 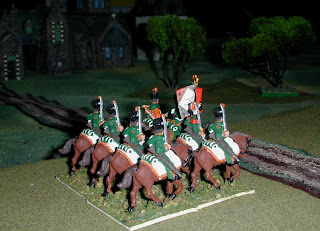 Note the elite company trooper in colpack with red cords, a orange bag piped white, tall red plume, and red epaulets. According to the memoirs of Chasseur officer Charles Parquin, moustaches were obligatory for men of the elite company, just as they were for the grenadiers of the infantry. 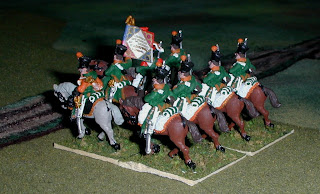 This view of the 13e Chasseurs shows the black sheepskin of the trumpeter very well. His trumpet cords are mixed orange and white in color. The portmaneau at the rear of the sheepskin is dark green piped white for all regiments, as was the saddle blanket or shabraque (when worn). These chaps are Foundry figures. 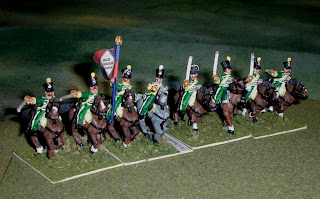 These fellows are the 5e Regiment of Chasseurs a Cheval, perhaps my favorite regiment. I started in this hobby way back at age 13. My first armies were painted KILIA grade flats from Aloys Ochel in Kiel, DFR; I had little confidence in my artistic abilities! A few years later I decided I wanted to make the move to round figures and painting my own; my figures were 25mm by Jack Scruby, and my French Napoleonic army eventually numbered over 1,000 figures. The very first unit I ever painted was the 5th Chasseurs; by the time I entered High School I had purchased a copy of Liliane and Fred Funken's inspiring and heavily illustrated 2 volume L'Uniforme et les Armes des Soldats du Premier Empire, which I still posses. The picture of a group of Chasseurs galloping forth in their earlier uniforms was and still is just irresistible! This regiment, like the earlier Scruby version, is painted in the dolman they so long and so stubbornly clung to. 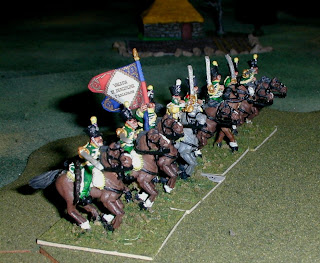 Note the lace bands on the chest of the dolman; the trumpeter is once again in reversed colors, in this case once again with white lace on his dolman as well. 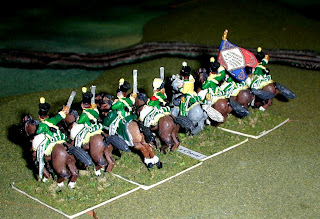 The elite company trooper has a yellow bag piped white on his colpack but no plume. This unit is Sash and Saber figures once again. 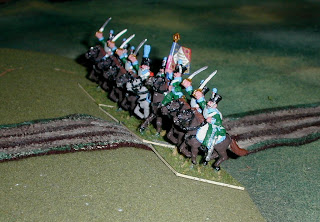 The final of my four regiments is the 16e Regiment of Chasseurs a Cheval. This units is also a favorite of mine. Due to the earlier decommissioning of the 17th and 18th regiments, this is the almost the only French cavalry regiment to have sky blue facings, aside from the later Carabiniers and the future 5th Chevau-Leger Lanciers of the Line. 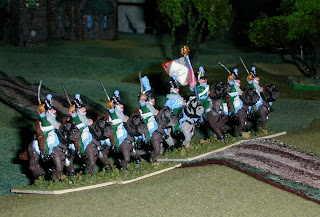 The trumpeter is once again in my beloved reversed facings; sky blue faced dark green. 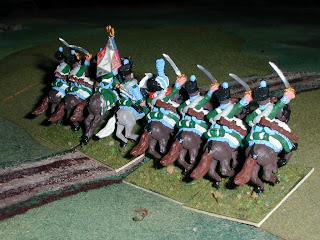 A final ﻿shot of the 16th Chasseurs as they charge up a gentle ridge; note that in this case the trooper of the compagnie d' elite has both a sky blue plume on his colpack and a sky blue bag piped white. Foundry figures once again.
Thanks again for reading; not my best painting on these figures which were done more than 10 years ago, before adopting my current techniques. Still I think they are a dashing group!
Posted by Gonsalvo at 11:55 PM