Well, it is hard to believe it is now exactly a year since I started this blog, so a bit of a retrospective seems fitting. I managed 63 posts over the course of the year, and had more than 40,000 page views, and I have to be pretty happy with that. Inevitably, the blog has lead me to new friends, as well as interacting with old ones. The one post with the most hits by far (almost 900) was the rather detailed description and comparison of Brent Oman's "Field of Battle" rules, including both the first and the recently released second editions. Great rules! I'll have to do a detailed post on Piquet: Les Grognards some time as a contrast. Speaking of that, the 5 part review and battle report on Bob Jones" newest rules, "Die Fighting" was also one of the leaders, featuring the adventures of the somewhat whiny Frenchman, Prince Sorbet, and the headstrong Austrian, Count Herbert von Karrion . The battle report with the most hits (and second overall) was the big Historicon game "Czar" Barry and I put on, "Neverenufsky", which is interesting as its the only fictional here one so far! Loosely based upon part of the OOB for Borodino, we had a blast playing it. The post of painted units and background information with the most hits was "French Napoleonic Hussars".

My own favorite posts of the year are actually some of the earliest, just because they deal with subjects about which it is somewhat difficult to find good information on: The Army of Baden, and The Landwehr Collection: Part 1 (Inner Austria), Part 2 (Upper and Lower Austria), Part 3 (Bohemia and Moravia), and Part 4 (Hungarian Insurrectio). I especially like the four units of the Hungarian Insurrectio, which you don't see on the table very often.

The blog aside, I got in a reasonable amount of gaming for me. As usual, almost half of it took place at Historicon, reported in detail here in July. I also performed poorly as surrogate general for Duane's Gulderland forces at The Battle of Jamesway Junction, as reported on Barry's Blog; that was using Piquet: Les Grognards. This was part of our Napoleonic "Imagi-nations" campaign, using the venerable Warplan 5/5 system We ran a playtest of our scenario for the Battle of Gordetschna 1812 at the Time Machine in Manchestyer, and then later at the HAVOC convention in Springfield, MA in April. Barry, Joe and I did several playtests of Eric Burgess' "Vauban's Wars" siege rules, which are coming along nicely. Barry and I also had fun playing out the Graz Scenario from the scenario book. Finally, we ran a successful playtest of about half of our Borodino scenario at Elliscon in November.

Speaking of scenarios, I completed work on the 1809: Blunders on the Danube book in the first half of the year, and it was printed last month. I am very pleased with how it came out. It of course gave its name to this blog, and the work involved in developing it spanned three years. Much thanks again to the HAHGS guys for their contributions to the various scenarios and games! Hopefully gamers find it useful.

Painting wise, it was a reasonably productive year, but not a great one:

That comes to 134 Infantry, 64 Cavalry, 18 Artillery with 6 guns, so a little under 220 figures. That's about half my absolute maximum possible painting output for a year; the last time I did that was getting ready for Wagram (2008). Starting this blog, finishing "Blunders", and the nightmares (and enormous cost!) associated with upgrading my office computer system to meet the latest, almost arbitrary requirements, the federal government seems to delight in imposing on physicians, consumed a fair amount of painting time.

B) Others
Eureka Tyrolean rebels
Old Glory Grenz (one unit in black cloaks as Siebenburgers, i.e., from Transylvania - bleah!)
More Russian Infantry (?) - various manufacturers
Possibly some additions to my Assyrian army
Maybe a few odd ball Napoleonic units - Irish Legion, Neufchatel Battalion, Portuguese Legion, Regiment Joseph-Napoleon are among the possibilities.
Maybe add a unit each of Baden Light Dragoons and Artillery... or at least get the figures for same. These may need to be Front Rank to match the large Pontoonier figures.

2) Publishing - absolutely nothing for this year, LOL, and probably not next year, either.  :-)

3) Blogging - aside from chronicling my ongoing painting, gaming, etc, I want to:
Finish up the Austrian Army coverage
Add the French Imperial Guard Cavalry and Artillery
Add the rest of the Russian army
Add the rest of the 1809 battles to the blog.
Also figure out how to successfully embed a You-tube link! Many of you seem to do it, but I couldn't get it to work for me!

4) Gaming
Work with Barry to develop the 1 or two additional 1812 scenarios we need for Historicon this July.
Run our massive Battle of Borodino scenario, etc., with Barry and company at Historicon (using Field of Battle). Plan any other Historicon games with the Piquet mailing list crowd.
Plan for Historicon 2013 - I want to do Dresden for sure, and probably two other 1813 battles. That probably means  adding some more Prussians later in the year, at least to the Lead Pipeline!
I'm starting out in a very informal Ancients "Campaign" with the HAHGS guys, usin Hail Caesar! I haven't yet decided whether to use my Carthagenians or my Assyrians for this one.
Maybe another Vauban's Wars playtest if Eric completes a new draft.
Continue with our Napoleonic Imaginations campaign, and see if my country ( La République du Bénéfice,  headed by its Premier Contrôleur, Rob S. Pierre) can actually manage anything positive. Modeled after late Republican France, should things go badly there is General Leonap Partebon, said to be quite the party animal, who might not be opposed to meddling in Affairs of State. Of course, over in neighboring Fuddland (Barry's country), certain ladies of the court are often rumored to be involved in affairs, whether those of State or not! 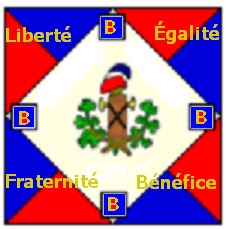 May you all have a happy, healthy, and prosperous 2012, with plenty of toys and gaming to divert you from the real world as needed!
Peter
Posted by Gonsalvo at 9:28 AM