The opening of the 1809 campaign saw much of the burden of the early fighting fall upon the Bavarians, who were deployed in three Doivisions, with supporting Cavalry. The battle of Abensburg was the immediate result of Napoleon's long awaiting arrival in the theater of war, and the orders he issued to accomplish the re-unification of his army. This battle was fought on the tabletop last year, with Barry commanding the Whitecoats, while Mark Carlson and I had the French/Bavarians.

A stylized map of the Battlefield (from the "1809: Blunders on the Danube" scenario book, and adapted from those in John H. Gill's works) will help to understand the action as it unfolds. 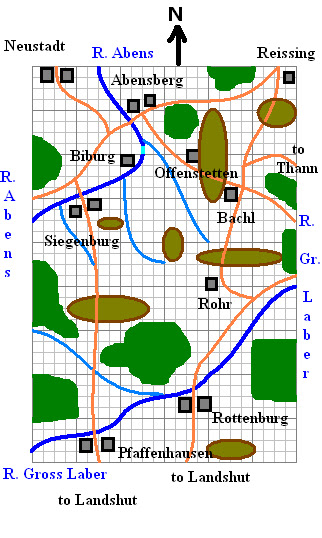 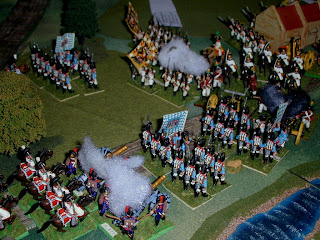 Bavarian troops issuing out of Abensburg attack the opposing Austrians around Offenstetten. 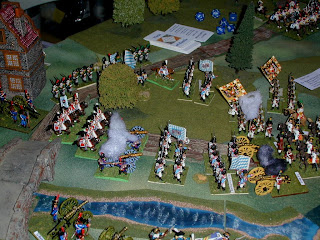 The initial Bavarian assaults have failed, with 2 units routed and another forced back. 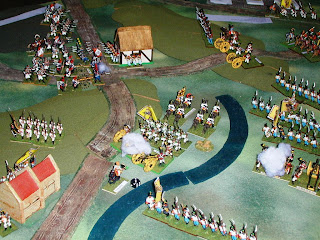 The advance of Marshal Lannes' ad hoc French Corps upon Bachl (left upper corner of pic) is making the Austrian position at Offenstetten untenable. To the right, Austrian defenders opposite Biburg. 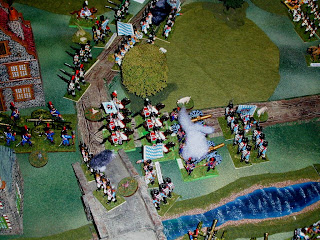 However, the second Bavarian attack upon Offenstetten is even less successful than the first, and the death of the Bavarian brigade commander (roll of "1" on a D20!) throws his entire command into Disorder - note the liberal application of pigs, chickens, and other barnyard inhabitants! 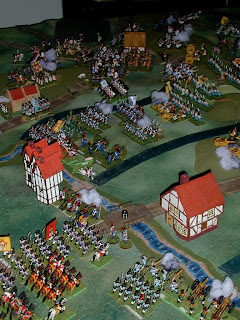 Overview of the situation; Sappers have almost completed a pontoon bridge over the Abens near Siegenburg, while the allied attack from Biburg is pushing back the Kaiserlicks, and Lannes (Mark, in his first battle) is pushing the Austrians back rather convincingly near Bachl. 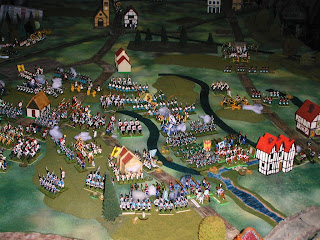 A somewhat different view, looking from the rooftops of Abensburg (nearest at bottom edge) out towards Rohr (top of the picture). The broken terrain has the French and their Confederation of the Rhine allies advancing along four different routes. (I have used Hessians, Wurttemburgers and Badeners for some commands as I don't have that many Bavarians, and at least all except the Hessians wear some kind of crested helmet!) 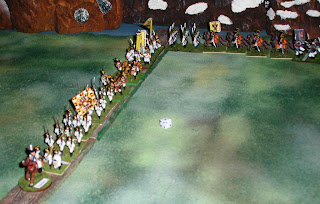 Austrian reinforcements arrive, lead by General Hiller, who has been marching all day, albeit rather slowly, from the vicinity of  Landshut. 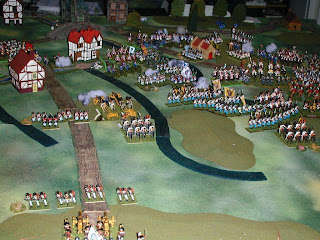 The view from the Austrian positions near Pfaffenhausen. 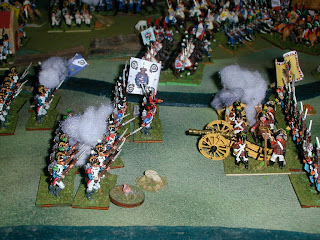 Hessians and Badeners on the attack from the Biburg crossing. 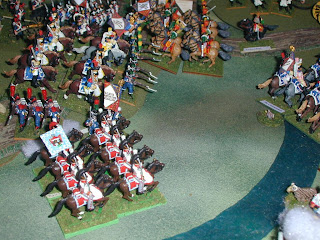 Bavarian Dragoons, French Legere, and French Cuirassiers fighting the Austrians near Bachl. The Ram looks on (another "Out of Command" marker), and observes that things are going baaaaa-dly for the Kaiserlicks! 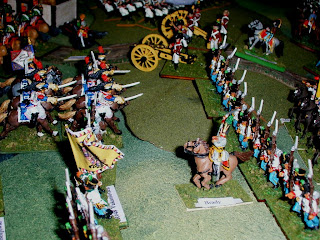 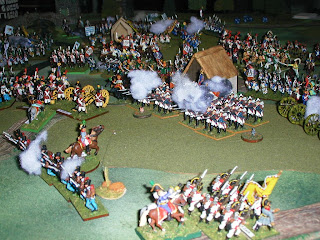 With predictable results! The French have taken Bachl! 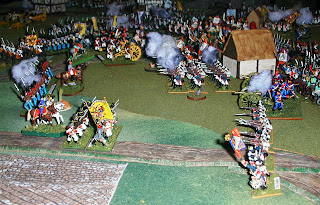 The French have now turned the Austrian's flank at Rohr as well. 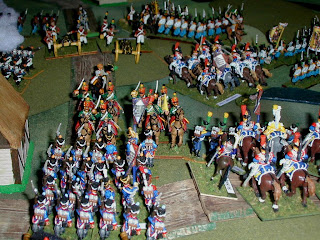 The Austrian Hussars launch a bold charge of their own, attempting to buy time for their footslogger comrades to withdraw and consolidate their position! It is too little, too late, though, and across all the axes of the Franco-Bavarian advance, the Austrians are in full retreat. Hiller cannot join up with the main army under Erzherzog Karl, and instead retreats back towards Landshut.
This was an interesting action to play out on the tabletop; at times the game played more like a Grand Tactical action, which was good because that was the feel I was looking for with this scenario, and playing it out on the table helped me understand this phase of the campaign better. When referring to the map, recall that Thann is the vicinity where Davout's battle of Teugen-Hausen took place (indeed, in French sources it is often referred to as the battle of Thann).
Peter
Posted by Gonsalvo at 1:05 AM