Well, the 1809 campaign opened with lots of Donner und Blitzen, as spring thunderstorms drenched the troops and more than once, put a stop to battles. I had been procrastinating a bit finalizing my plans for this "Campaign in a Day" using the Snappy Nappy rules by Russ Lockwood; see Part One earlier on this blog for more background  information on the rules and the Campaign in a day concept. I got confirmation of the game for Ellis Con last week at last, and so I started working on the maps for the game. I decided to use "Battle Chronicler" for the final map(s). The advent of Frankensturm (Hurricane Sandy) closed the office early yesterday, and I used some of the time for mapping!  Here is the map with the rivers, roads,towns and villages; I'm already working on adding the forests and ridges now, but that will take a while to complete. Click on the map to zoom in for a closer view: 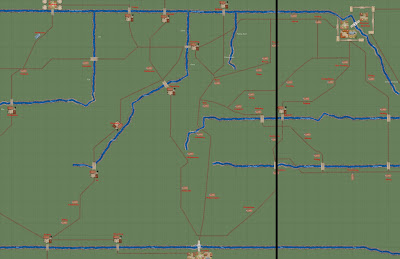 In order to so this, first I created a sketch map, using the grid from the Campaign Cartographer program (free, as is Battle Chronicler) The total area of the tables will be 22 feet x 34 feet (-), so I made 1 quare equal to 2 feet for this purpose:

I then used MS Paint to sketch in the major and minor rivers, altering their courses somewhat to accommodate the planned division of the theater into a number of much smaller tables:

Here's the sketch map with the proposed table divisions marked on it:

I am really looking forward to this project, which should be a lot of fun! I'm be depending heavily on my friends from the Hartford Area Historical Gaming Society for help with terrain and setting up the many tables.  The game will be run at Ellis Con, on  Saturday, November 17 , 2012 at Ellis Technical School in Danielson, CT.  Planned time is 11 AM to 5 PM. More updates later.

Peter
Posted by Gonsalvo at 1:05 PM