Most Americans are aware of the Hessian states of Germany, if at all, chiefly due to the employment of Hessian troops under contract to the British during the American Revolutionary war. It was troops of the Hessian contingent that Washington surprised in 1776 with his Christmas night crossing of the Delaware near Trenton, NJ. Hessian lands had been split into two separate, small states in 1567: Hessen-Darmstadt and Hessen-Kasel. While both states fought against Revolutionary France, their fates during the Napoleonic Wars were quite different. Both states were initially augmented in 1803, receiving territories from former Imperial free towns and small church states. In 1806, however, the newly elevated Kurfurst of Hessen-Kasel, Wilhelm I, displeased Napoleon when he partially mobilized his army as the war between France and Prussia began. Under the terms of the Treaty of Tilsit in 1807, Hessen Kasel was dissolved and its territories, along with additional; lands seceded by Prussia, were used to form the nucleus of the new Kingdom of Westfalia, which was given to Napoleon's brother, Jerome. Wilhelm returned to his lands in November, 1813, after the French were expelled from Germany following the battle of Leipzig.

Landgraf Ludwig X of Hessen-Darmstadt wisely allied himself with France in 1806, joining the newly formed Confederation if the Rhine as a founding member in July of that year. As a reward, Ludwig was elevated to the rank of  Grossherzog (Grand Duke), and Hessen-Darmstadt was further enlarged by receiving all remaining former Imperial possessions found within its (fragmented) boundaries. Its population at this time was probably about 600,000 persons. Hessian troops fought with the French in 1806 and 1807, generally earning a good reputation. Hessian reputations didn't fare as well when their contingent fought in Spain, but the men lived up to their reputation in the Danube campaign of 1809, being engaged in heavy  fighting at Aspern as part of Cara St. Cyr's Division of Marshal Massena's IV Corps; Hessian troops also fought at Pressburg, Wagram (being involved in heavy fighting around Aderklaa), and Znaim.  Troops from the Grand Duchy continued to fight along side the French is Spain, and also participated in the invasion of Russia in 1812, and the 1813 campaign in Germany, before passing into the Allied camp for the remainder of the Napoleonic Wars. 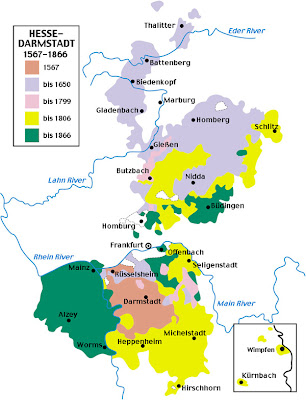 Map of Hessen-Darmstadt territories over time; the territories in green were added following the Congress of Vienna in 1815; other territories were lost to Prussia at that time.

In 1806, the army of the Grand Duchy had three Infantry "brigades", essentially the same as regiments in most armies, each composed of 2 battalions of line infantry , wearing dark blue coats, and one battalion of Fusiliers (light infantry), wearing dark green coats. All battalions had four companies of about 120 men, which was increased to 170 men per company for the Danube campaign in 1809.  In late 1808, the Gross und Erbprinz brigade, which fought in Spain, was reorganized along French lines into two 6 company battalions with one each of Grenadiers and Voltigeurs, and four center companies per battalion, all (eventually) wearing dark blue coats. It is unclear if or when the other brigades made the transition.  The bicorne hat was worn until 1809; thereafter it appears the shako was adopted, bearing a silver heart shaped plaque upon which the heraldic striped Lion of Hesse was embossed. Gill states that the transition to shakos was made late in the 1809 campaign, but notes that the transition "was still incomplete when the contingent returned to Darmstatdt in January 1810". Breeches and crossbelts were white; later, blue pants may have been worn on campaign. All units had red turnbacks on the jackets, with the collar, cuffs, and lapels in the facing color. The Leib Garde and Leib regiments had white button hole lace on the cuffs and lapels; the other units may have had the lace as well.

I am not aware of any 25/28mm manufacturer who makes troops specifically for the Hessians of the Napoleonic wars. For the uniforms up to 1809, I suppose 1806 era Prussians would be the closest fit. Of course, those two are in fairly short supply. As a result, I chose to do my small Hessian contingent in the late 1809 and beyond uniforms with the shako, using Sash and Saber French line infantry figures. 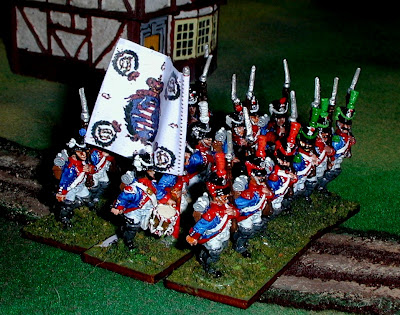 This is the Leib Garde brigade, with its red facings. Note the wings on the drummer, trimmed in white, and the red and white striped rims of the drum. On reviewing my sources, the officer's plume should probably be black with a red base instead of white; I will probably change this. 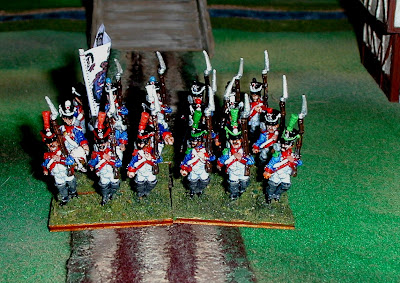 I have chosen to assume, perhaps without justification, that the Hessian units remaining in Germany ultimately transitioned to the French organization as well - six companies with one each of Grenadiers (red plumes and epaulettes) and Voltigeurs (green plumes and epaulettes). This is implied in Von Pivka's Osprey Men at Arms #122 (see below). 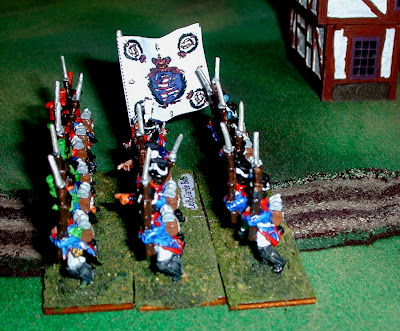 A somewhat blurry photo, but a clear image of the flag of the Leib Garde brigade. Each infantry battalion (but not the Fusiliers) carried two flags. In the case of the Leib-Garde, all four flags were the same as shown above, with an all white field. Flag is downloaded from Napflag. 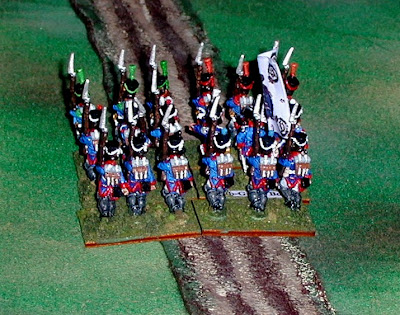 A rear view of the Hessen-Darmstadt Leib-Garde brigade; the red turnbacks are common to all units. This unit had silver scales on the chinstraps. 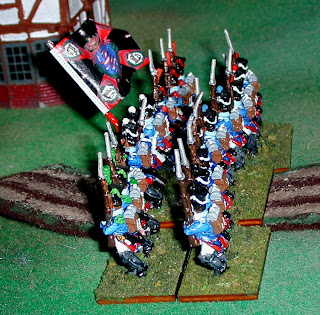 Next is the Leib brigade. This unit has light blue facings, which are a bit hard to see well in the photo. Black chinstraps edged with the facing color were worn by this and the remaining infantry units. 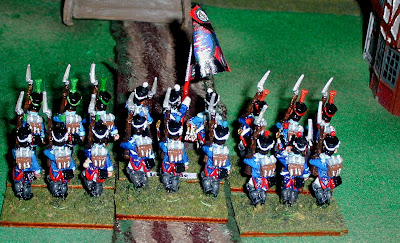 Rear view of the Leib brigade. The company pom poms for the first four companies were white, black, blue and red respectively, as seen here. 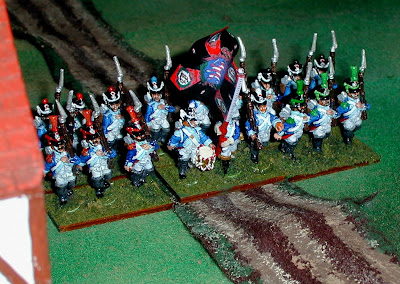 This view best shows the light blue facings of the Leib brigade, which contrast much more cleanly on the actual figures; quite an attractive combination, I think. I originally painted two 12 figure Hessian units in December 2008, in preparation for our 1809 project at Historicon, using left over Sash and Saber figures. I finally had the time this month to flesh both units out to a full 18 figures (and add one of the glorious Hesse-Darmstadt standards to the Leib brigade, as seen above). 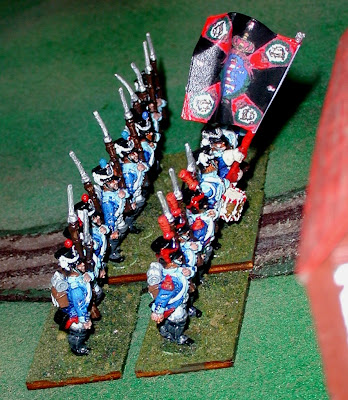 Unlike the Leib-Garde, the other Hessian brigades had two different styles of flags; one Avancirfahne with a white ground, and three Retirirfahnen, with a black ground. The first battalion of each brigade carried one of each, the second two Retirirfahnen. Later, this was reduced to one flag per battalion, with the 1st battalion carrying the Avancirfahne. The corner rays on the Avancirfahne were  half black, half colored (red for the Leib brigade, yellow for the Gross und Erbprinz), while the corner rays on the Retirirfahnen were solid in the same colors as listed. The central design was the same for all flags.The flag carried above is the Retirirfahne of the Leib brigade. I have deepened the colors of the red corner rays and black cross somewhat with paint. New flags were issued in 1814; these are shown (and available) on the Napflags site.

I hope you've found this survey useful. I hope to eventually add a Hessian artillery battery and their small Chevauxleger regiment to complete the force. As a closing note, Marshal Davout, not as man inclined to compliments, said of the Hessian performance in 1809,  France "could not be better served than by these troops."

ADDENUM October 30th:  A few errors were brought to my attention, including the cosed lape;ls worn by Hessian units plus I wated to fix the chin strap/scales, officer plume clor, and I realized I left off the white button hole lace on the Leib Brigade. "Merciful Heavens, your highness, how can we possible go to battle without our Lace in place?"

So, here's the Leib Brigade with those changes made: 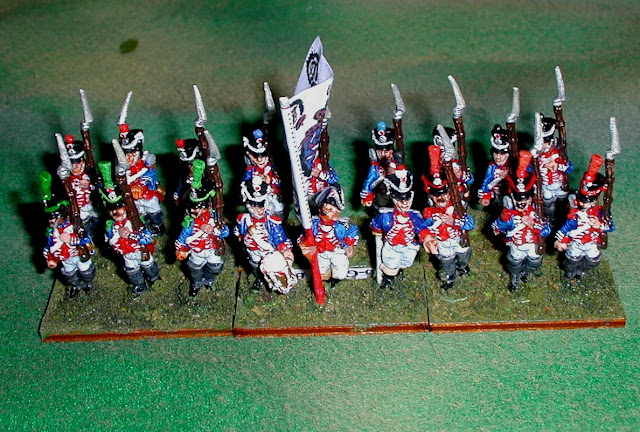 Email ThisBlogThis!Share to TwitterShare to FacebookShare to Pinterest
Labels: Confederation of the Rhine, Hessen-Darmstadt, Napoleonic, Sash and Saber, Unit Pictures