Continuing on through my vintage 1970's ear 25mm Minifigs English Civil War armies, next up are two regiments of Parliamentarian Horse. 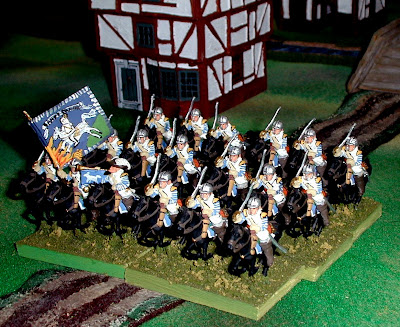 The first unit is Sir William Tirrell's Regiment of Horse (also spelled Tyrrell, and the same name in the US Terrell, and other variants).  The regiment wears white coats with stylish adornments (yellow wings and blue rings on the sleeves of their jackets). 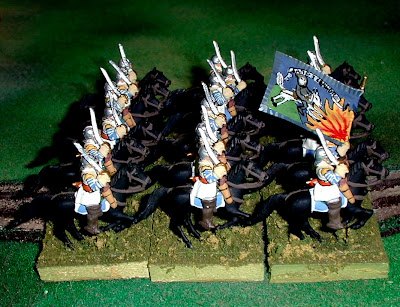 The flag is a historical one, and was carried by this regiment specifically. It is illustrated in the Almark book "The English Civil War" by R. Potter and G. A. Ebleton (1973). The scroll reads "Sanes Craindre", which as best as I can tell, means "Nothing to Fear", and the aloof countenance of the rider seems almost akin to the image accompanying the Fool in the Trumps Major of a Tarot deck! 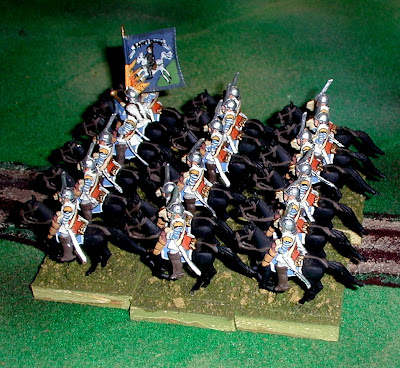 A stylish regiment, their saddle blankets being light blue with white trim - purely whimsy on my part... a bit reminiscent of the later French Carabiniers of the Napoleonic Wars! 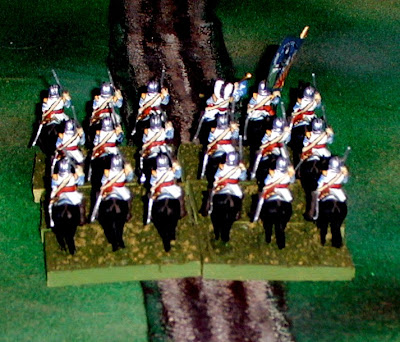 Their orange tawny sashes mark them as Parliamentarians for sure! I have this regiment mounted on the narrower bases originally called for by George Gush's Renaissance rules for "trotters (cavalry relying more on their Pistols than their swords). 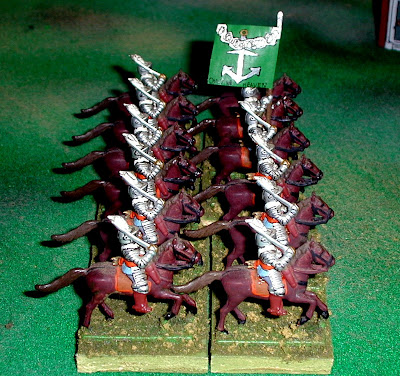 This regiment of "Lobsters" (men wearing 3/4 armor, or Cuirassiers in European parlance of the time) was raised by Sir Arthur Haselrig early in the course of the English Civil War.The flag is historical; the inscription reads "Only in Heaven" 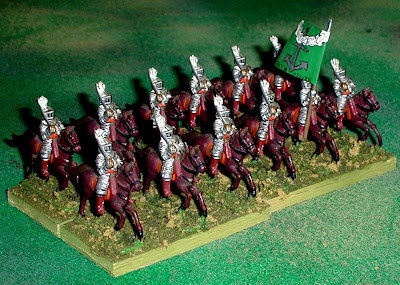 Sir Arthur had good reason to raise troops to oppose King Charles I; he was one of the "Five Members" o f Parliament that King Charles attempted to arrest for treason in January 1642, thus provoking the Civil War itself. The regiment was said to be 550 men strong, and fought at Edgehill, Landsdowne, Roundway Down, and Cheriton. 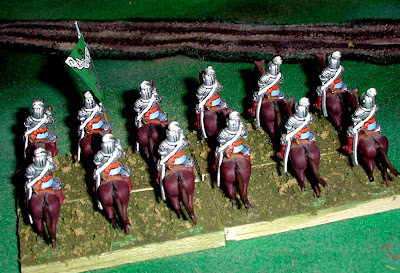 Once again, the orange sashes certainly mark the unit as Parliamentarian! Haselrig was a staunch Republican, and after initially supporting Cromwell, subsequently came to oppose him, and later Lambert. Upon the Restoration of Charles II, General Mock intervened upon his behalf preventing his execution, but he was imprisoned in the Tower of London and died there in 1661. It is more than a bit ironic that his regiment was then taken up into Royal service, becoming the Oxford Blues after the color of their coats. Eventually, that regiment became the Royal Horse Guard Blues in 1750. As usual,  history is stranger than fiction!

Peter
Posted by Gonsalvo at 8:45 PM