As regular readers of my blog will know, I am currently engaged in a major expansion of my Napoleonic Prussian (18113-15 era) army.  My Prussian army is definitely the "Johann come lately" of my major continental armies; my first French (and British) were 25mm pre-painted KILIA grade Flats from Aloys Ochel of Kiel, West Germany, which I started acquiring circa 1966. By 1969, I decided I anted to be able to choose my own regiments, and was finally ready to tackle painting my own troops. The Flats were sold off and I started building new armies using Jack Scruby's 25mm figures (with a few Hinton Hunt figures mixed in). The French were first (large) army I built; I later added some Austrian and Russians, switching to Minifuigs for most newer additions to my forces by the mid 1970's. Another fellow in the group raised a few British units, and another a moderately large Prussian Army. I started to switch out my veteran Scruby figures for Wargames Foundry in the early 1990's (before their prices went crazy). First I did the French (of course!), and then added more Austrians and Russians (of various manufacturers, but especially Old Glory) to my still very much in use Minifigs.

In a way, it is a bit remarkable that I didn't really give the Prussians much thought; I probably have more German ancestry than anything else, and learned German in college (it was recommended for Chemistry majors, and I also wanted to be able to read Knoetel, then available only in German). However, their post 1807 uniforms are, well, kind of drab. The Pre-1808 uniforms are much nicer but they didn't fight very well, and the availability of casting in uniforms of that era in 25/28mm was very limited. Then, at Historicon  in 2001, I ran a set of three simultaneous Piquet: Les Grognards Napoleonic games. One of the games, the famed Mohrungen 1807 "Pine Suppository" scenario had Jamie Williamson and his friend Brett playing in it. We had a great time with them as players, and then after the game Jamie produced about 100 very nice, neatly painted 1813 Prussian Minifigs that he offered to sell me. It seems that he had painted them back in the day, when his group was doing 25mm Napoleonics, but they had since moved on to 15mm (or even smaller), and he had no use for them. I hesitated a bit, as Prussians really weren't in my long range plan, but at $1/figure for troops painted at least as well as I could... it was a deal!  Of course, having them as a core meant that I needed more troops to expand the army to a reasonable size. I bought some Old Glory Prussians (while Jamie took his new cash and bought a ton of smaller scale figures, I'm sure), and it turned out Joe had a sizable remnant of his own 25mm Prussian Minifigs army that he no longer really had any use for, so they were added to the collection after some touch up and facing color changes.

I later added a few Calpe figures - gorgeous, but they are really a bit big to comfortably share the table with my exiting Minifigs/OG/Foundry figures, and it seemed they were too nice for my painting to really do them justice as well, LOL!. The lot of them were used in my 2002 Dresden game using Grand Piquet. At the same time, I began to covet some 1812 and beyond era Prussian Guard Infantry wearing the tall white Busch plumes. It is doubtful whether these were ever worn in combat, but they are marvelous bits of uniform "bling", and like the Rusians, without the plumes all you have to tell the Guard from the Line is the Guard Stars on their equipment, and the subtle Litzen lace ornamentation on the collars and cuffs. Be still my pounding heart... not , LOL!. Anyway, Minifigs was one of the few manufacturers to make such figures at that time, but they had pretty much ceased doing business in the US by then, and it wasn't clear that the parent company in the UK was still selling them. I made  Joe aware of my lust for these figures, and he managed to find a bag of 16 unpainted figures of them in the flea market that year for $10 (Joe has much ore patience scrounging around in Flea markets than I do!).

I used my Prussians again for Dennewitz, 1813 at Historicon in 2003. That year, Joe couldn't attend (although he helped me playtest it at home(), but my old wargames friend Paul, who had moved to Arizona, wound up flying out and staying with me for the convention, as well as playing in the Dennewitz game. That game was also notable for the use of the new Les Grognard's, 2nd edition Grand Tactical scale and Horizon Movement, as well as my first GM award for a Historicon game.

With two 1813 games planned for Historicon this year (Dresden and Mockern), and possibly others next year (or for Ellis Con and/or Havoc), and Ligny for 2015, doing my Prussian expansion made sense. The last of my Old Glory orders (so far) were cleaned and primed earlier in the month.  I came down with a nasty 24 hr stomache bug on Friday AM, enough to cancel a day in the office due to illness for the first time ion 30 years. By Saturday I was feeling fair, but not great... so I started painting the horde of Prussians I had prepped - 20 Foot Artillery Crew, 20 Horse Artillery Crew, 16 Guard Infantry, and 30 Reserve Infantry in "British" uniforms.

I started with painting all those jackets with slightly thinned Delta Ceramcoat "Prussian Blue"...and quite a horde it was. 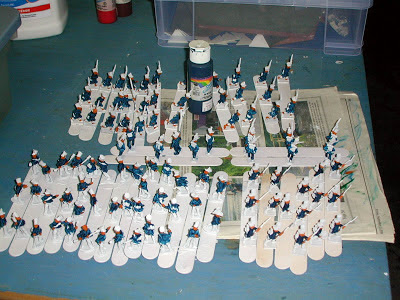 Yep, I do use tongue depressors to glue my figures to while they are being painted - just not used ones! 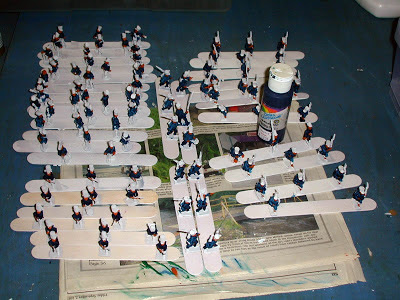 (not shown,,, another 18 figures with "Rifle Green" [Vallejo Green-Black] coats!)


As  I painted over 100 coats, I started thinking about the color itself, which I really like, but never use with my French troops. I recalled reading somewhere that Prussian Blue was one of the very first synthetic, non organic pigments created. A little searching found the quite good Wikipedia article on the subject:

In short, the color was first produced accidentally circa 1706 (the chemist was trying to make a red pigment, but impurities in the reagents priduced a blue product instead!). As it turned out to be light fast (relatively stable to light exposure), and much less expensive than the only other blue pigment useful for painting blue (made of a fine suspension of crushed blue stone imported from Afghanistan), its commercial value was readily appreciated, and it became widely used first in art, and then for creating dark blue clothing... the dunkelblau of the Prussian uniforms was created using Prussian Blue (the pigment is insoluable, but is used as a fine solid suspended as as a colloid). The chemistry of the (inorganic)compound turns out to be quite complex but also very fascinating (see the wiki article for those with an interest in Chemistry - like myself!), including at its heart both Ferrous and Ferric states of Iron cations complexed to six cyanide groups each. Indeed, when the Cyanide group was finally isolated( from Prussian Blue preparation)s, the very name given to it was a Latinized version of the Greek word for "blue". We use that term extensively in Medicine as well - a patient who is "turning blue" (due to lack of oxygen and thus excessive amounts of the purplish deoxy-hemoglobin as opposed to the bright red oxygenated version) is said to be "cyanotic". Many of us with color computer printers will also be familiar with the term "cyan" applied to the blue pigment in our cartridges. Prussian Blue is also the traditional blue color used in "blueprints". There's another interesting and shorter reference to the history and chemistry of the compound here as well:

It is also useful for treating certain kinds of heavy metal exposures, as well as a histo-chemical stain for iron stores on Bone Marrow biopsy and other tissue specimens.