Vive L'Empereur: The "Regiment" as the Maneuver Element

About the same time that I started my Residency (1981), a new set of wargames rules was released that really sparked some reconsideration of my approach to the subject. With a nominal figure scale of 1:100, Ned argued in favor of using the regiment as the basic tabletop unit. This would translate to infantry units ranging from about 12 to 24 infantry, and 4 to 12 cavalry.. Although written with 15mm figures in mind, for 25 mm figures, basing was to be 15mm frontage for infantry (20mm for British and other 2 rank infantry), 35mm for Cavalry, and 10mm per gun in a battery. Ground scale for 25's was 1mm = 2 meters, in other words, effectively 1" = 50m.  As a result, again in 25mm terms, that set musket fire range at 10 cm and Rifle fire at abut 14cm, :, with Artillery ranges at 14cm for "effective", 30 cm for "average",  44 cm for "long" and 60 cm for "far" range. Movement was divided into "Full Moves", which were every rigid and allowed neither changes of facing, formation, nor reaction to the enemy, and combat moves, which were half the distance of Full moves, but did allow the above niceties of response and maneuver strategic conversion, there was also a Triple Move, representing units string out in Road column and moving over greater distances. A turn was sent to represent about 30 minutes of battlefield time.

The Full Move distances for 25 mm troops were as below:

The rules tracked combat effectiveness by "status points":, which, along with the figure strength of the unit and the other usual modifiers, were the key determinants of combat and losses. Vive L' Empereur also included extensive designer's notes (8 pages), explaining Ned's thinking. I love it when rules authors include these kinds of notes! 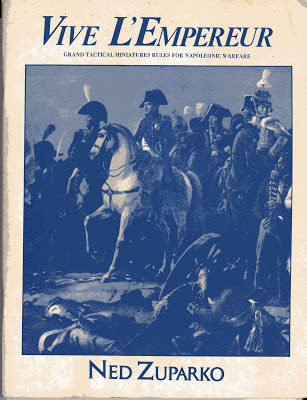 Published in 1981 by Chaosium, "Vive L' Empereur" was one of the first widely distributed sets of Napoleonic rules to use the Regiment instead of the Battalion or the Brigade as the basic tabletop unit.


Anyway, the rules had many good ideas, but the one thing I got most from it was the idea of a unit being a Regiment instead of a battalion or squadron. I'll quote the author here, as he presents the rationale better than I can:

The Regiment, a group of men about 2,000 strong, was chosen as the basic maneuver unit. In this way a typical Corps Commander would have about 20 units to handle, a number I felt optimal for one player. he average Corps might have three Divisions of 4 [infantry] Regiments each, with a cavalry Division of 4 regiments, and 5 artillery batteries. Another reason for using Regiments and Batteries comes from an item by Clausewitz. He states that the fire of an 8 gun 6 lber Battery 'certainly does twice and possibly three times' as much execution as a Battalion. Since a 'Regiment' would contain 2 or 3 Battalions, I found that Regiments and Batteries could be considered about equal in Firepower and potential.
Since the Command level being emphasized in the game is Corps,  Command, it is not necessary to portray historical units at the lowest level, such as the Battalion. Once the command level gets under the Division, the the number of maneuver units we choose to have needs to be considered only in terms of how many are playable. The "Regiment" of 2,000 men in some campaigns may have been a small Brigade, but the important point is that we are working with for which there are size equivalents in most armies, even if the names are different.  There is also some flexibility in portraying larger or smaller Regiments of, say, 1,500 to 3,000 men. Further, a "Regiment"  can handle many of the smaller level changes that may have historically occurred. For example, an 18 figure French "Regiment" could represent three 600-man battalions in 1813, or two 900 man Battalions of 1805.
The Regiment thus represents smaller units, Battalions, assumed to be operating in proximity.  We are considering the Regiment as covering a certain area, representing both a body of men and the critical space around them that would involve those men in combat if entered by an enemy. We don't need to worry about lower command levels - they are being abstracted to make our chosen command level of simulation easier to use. For this reason, if  any part of a Regiment touches any part of  another [enemy] Regiment, we assume that both units are entirely in close combat.

The author also observed that the 1:100 figure ratio made for easy conversion of Historical rosters to tabletop units, as well as keeping the size of collections needed to play the larger battles of the era at manageable levels. Ned remarked that setting the Maneuver unit as the Regiment also has the tabletop units at the same level at which most of the colorful variations in uniforms that the Napoleonic era is justly renowned for occurred. This made a lot of sense to me, and I decided that henceforth my units would represent "Regiments" of Infantry and Cavalry of 18 (6 stands of three each)  and 8 figures (four stands of 2 each)  respectively, and Batteries of Artillery with  2 stands of three crew (four for 12 lber batteries for ready identification on the tabletop).

Finally, I'll note that an eight figure Cavalry regiment conveniently makes the 1st figure the "elite company" in French regiments! Similarly, an 18 figure Infantry regiment mounted on six stands of three figures each  pretty neatly represents 2 large Austrian Battalions, 3 smaller French ones (allowing one stand each of Grenadiers and Voltigeurs, and four of Fusiliers per unit), a Prussian Regiment of 2 Musketeer and 1 Fusilier battalions (again allowing four stands of  Musketeers and two of Fusiliers), and probably almost a Brigade of the habitually under strength Russian units (here I fudge a bit by having one stand of Grenadiers and five of Musketeers/Jagers). As I approach doing the British, I confess that I am debating doing them as 20 figure regiments, probably each with 4 x four man stands of "center company" men, and two 2 man "Flank company stands. However, the more I think about it the more I am inclined to do them as 18 figures like all the rest, with one of the three man stands having 2 figures of Grenadiers on the right side, and a second having two figures of Light Company on the the left end of its stand. Close enough! Hmm, time to browse the Old Glory catalog for a sizable order of British to pick up at Historicon, perhaps?!