With the Historicon rush over, and the blog posts completed, I can actually paint whatever I feel like for a while before starting to firm up my plans for next year! I have actually gotten everything packed away from Historicon already - a record for me! So... I painted a batch of Entomalian starships for Galactic Knights to go with the group I did last summer. I'd like to try some more GK, as well as Star Navy 5150, both of which I have. I am particularly interested in seeing how easy or difficult it would to be to use the scenario and campaign generation system in 5150 for Galactic Knights....

Anyway, here are some pictures of the new ships, with their stats from the original Starfleet Wars rules, set on my new 4 x 6 foot GK 2" starfield hex mat: 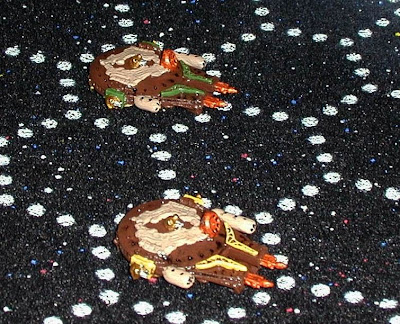 First up is this pair of Entomalian Galactic Transports (GTP). 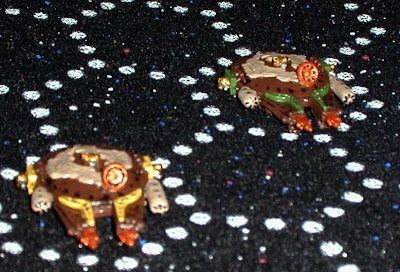 If you think these models bear a certain resemblance to a well known smuggling freighter from a Galaxy long, long ago and far, far away.... you might just be right! 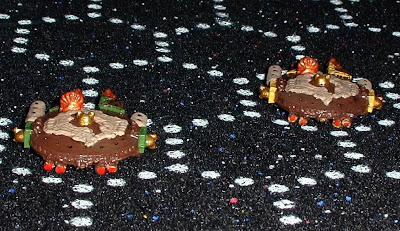 Transports are limited to a maximum speed of "4", unlike military ships which have a top speed of "5". 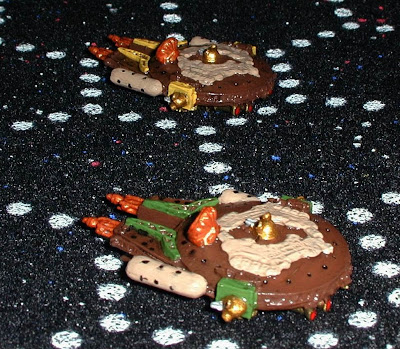 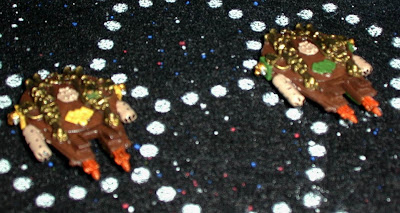 Somewhat blurry view of the underside of the Locust GTP's. 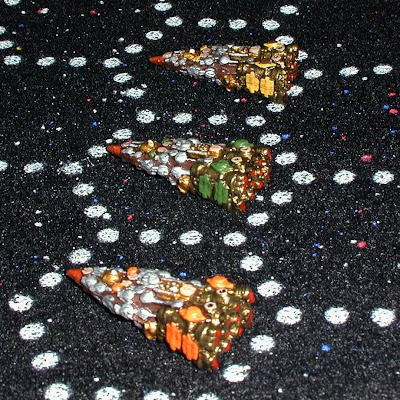 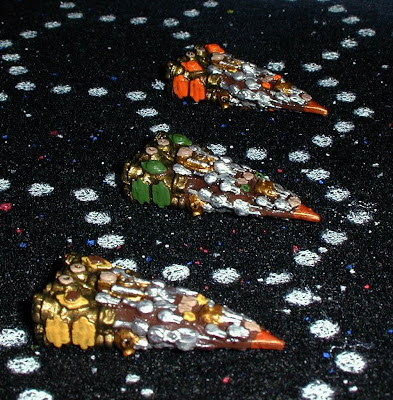 SAPS are usually used as "Flak ships", protecting their own fighters and adding close in support against enemy fighters. They are quite fragile, however. 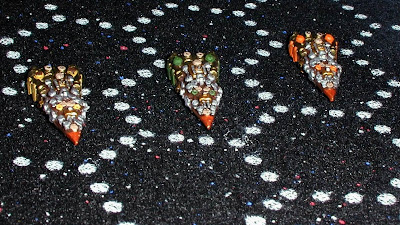 Any of these Star Armored Pursuit Ship is destroyed by a single hit by an offensive beam factor or particle weapon, or 4 hits by light lasers and/or CIDS factors. 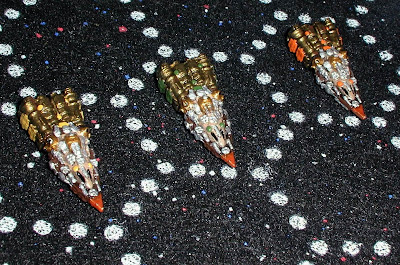 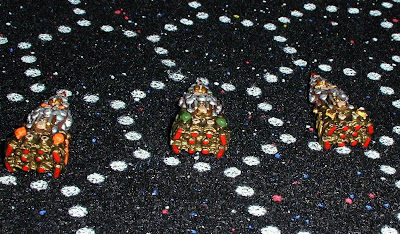 Like fighters, SAPS have superior speed and mobility to partially offset their vulnerability. 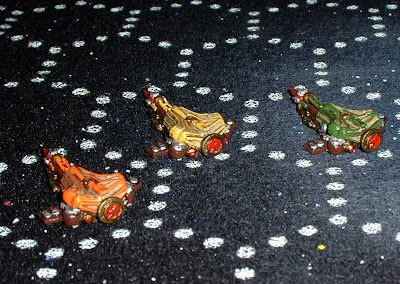 Last is this squadron of Entomalian Starbombers, coming soon to a Quadrant near you! 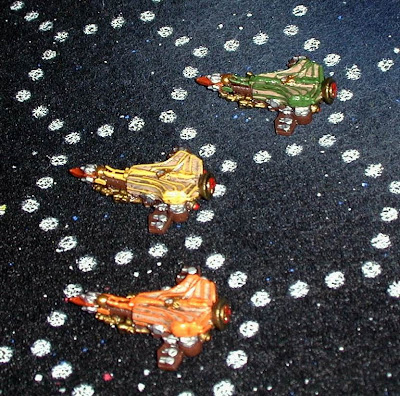 Starbombers are hit and destroyed in the same fashion as SAPS, so they too are rather fragile. 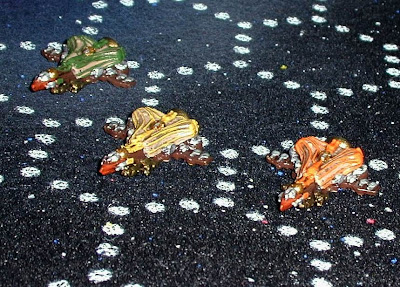 These SB's pose a major threat to larger ships, unlike the SAPS, because they carry a heavy load of Particle weapons - close range weapons that pack a punch and ignore enemy shields. 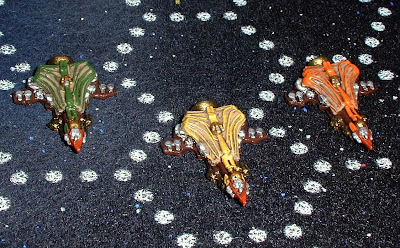 This threat generally tends to make them high priority targets! 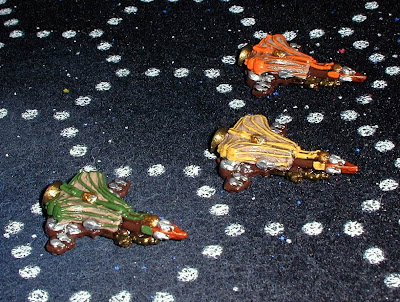 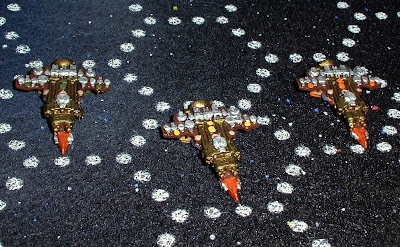 View of the detailed undersides of the SB's - typical for the Superior Starfleet Wars/Galactic Knights ships.

More for my own reference than anything, here are the colors I used for painting these models: 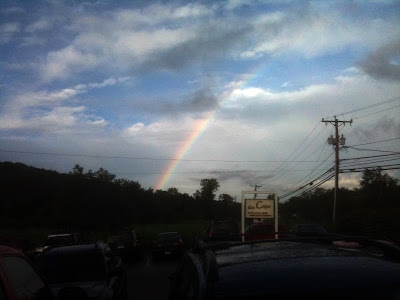 Leaving dinner after the rehearsal on Friday evening - it poured rain much of the day - except it stopped whenever we were outside, including the rehearsal itself! 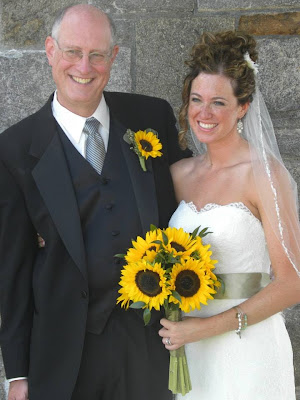 The Emperor and the (now ex-) Princess Imperial... 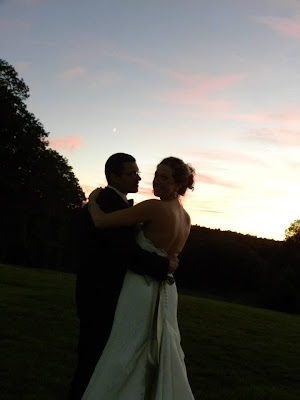 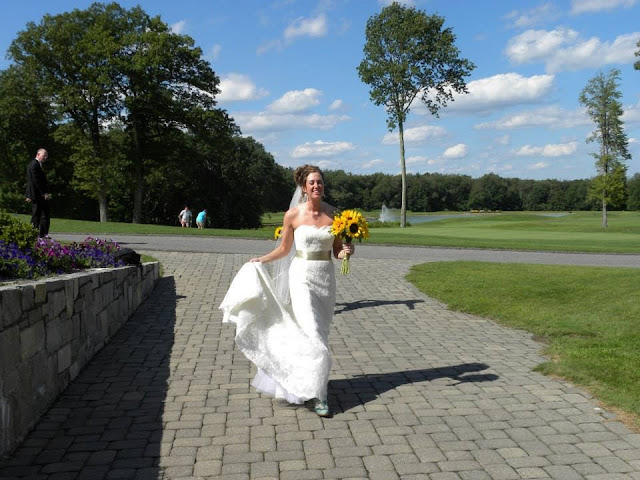 Peter
Posted by Gonsalvo at 9:30 PM