The last of my Prussian Reserve regiments are these two units, made up from the 30 figures in the Old Glory set PXI-07, "Prussian Militia Men with Command". These figures wear the Prussian "covered shako" and wear the Litewka, a long smock like coat without tails, said to be of Polish origin. As discussed previously, the Reserve Regiments wore a bewildering variety of uniforms, varying widely down to the battalion level, and evolving over time towards the same uniform of their Regular Stammregiment (parent unit). I have taken  more liberty than usual with these two units, so purists beware! 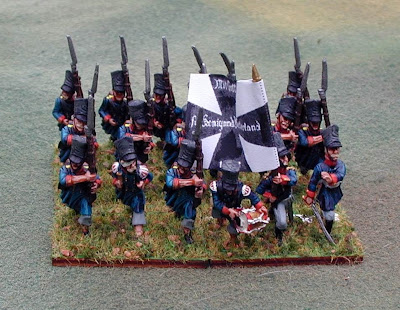 This is my version of the Drittes Reserve Infanterie-Regiment (3rd Reserve Regiment). By July 1813, three of the battalions had adopted the uniform of the 2nd East Prussian (Line) Regiment, its Stammregiment.  That regiment had Brick Red (dull orange) collars and cuffs, and scarlet red shoulder straps; by May 1815 the entire regiment was noted to have Yellow shoulder straps. As these troops will likely see action in the 1815 battles, I chose this later, more interesting variant. 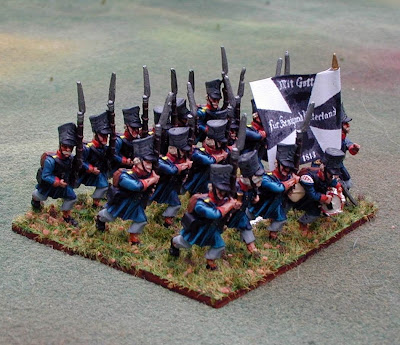 This shot shows the loosely cut dark (Prussian) blue Litewka coat. This was widely used by Landwehr infantry and  line and Landwehr cavalry, being much m,ore comfortable than the tailed tunic of the Line infantry. I couldn't find any documentation that any of the reserve regiments wore the Litewka... but these two units of mine do! 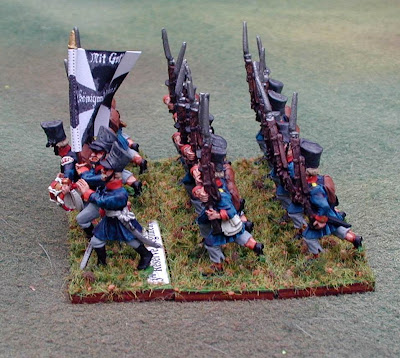 These figures are wearing clogs instead of boot or shoes with gaiters, a commonly seen variant due to the great shortage of clothing of all kinds resulting from the rapid expansion of the Prussian Army in 1813. 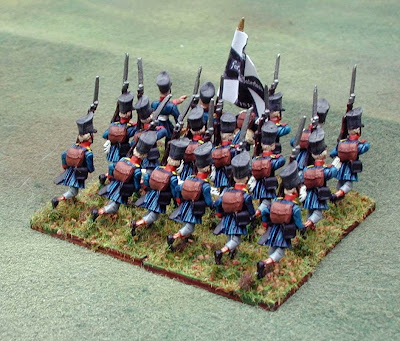 In March 1815, this unit became IR #15, "Zweites Westfalsches", and thus should have adopted the new rose pink facing color assigned to that province. I may perhaps be forgiven my severe skepticism that any aside from perhaps a few officers had made the switch by the time of the 1815 "Hundred Days" campaign. 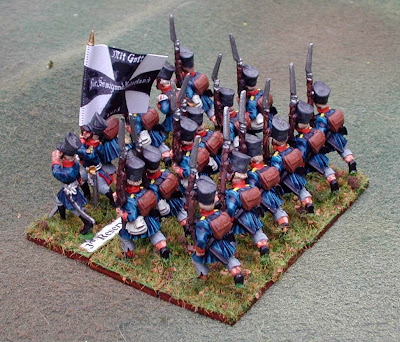 I've given the unit a typical 1813 Prussian militia flag, even though these units were not supposed to carry flags at all per the regulations. This may be the 3rd battalion (of four) of the Regiment, as it was noted to have black crossbelts, the 1st and 2nd battalions having white ones instead. 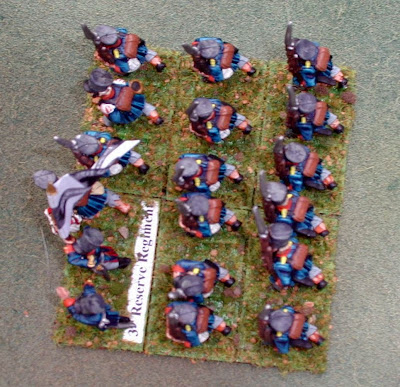 A final, top down shot of the unit discloses the hornist figure in the front rank, 2nd from the top. The only uniform distinction for them (and drummers) is the shoulder wings in the facing color, piped in white. Still, the inclusion of this figure in the pack is nice touch by Old Glory! 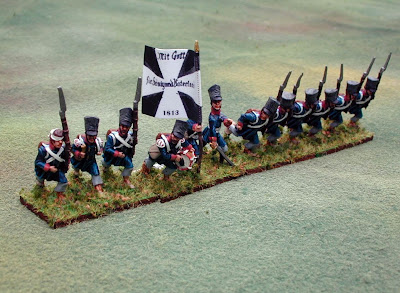 The other unit from this set is the Funftes Reserve Infanterie-Regiment (5th Reserve Regiment). Following the Armistice in 1813, this regiment gave up its original issue grey uniforms for new ones that varied by the battalion. The first battalion adopted the uniform of its Stammregiemnt, the 4th East Prussian Regiment: Brick Red (dull orange) collars and cuffs with light blue shoulder straps. 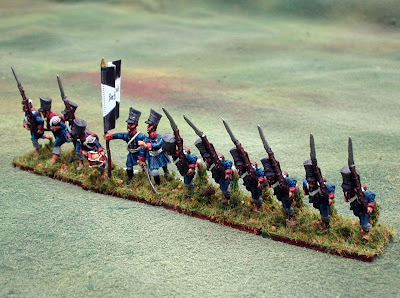 The crossbelts of the 1st battalion were white, as seen here. 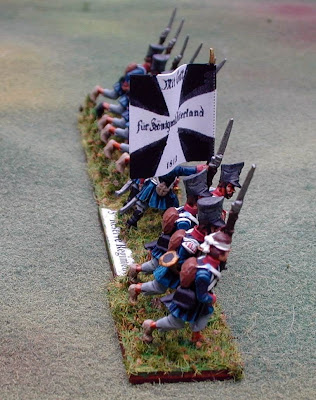 Note the wearing of clogs once again, and a better view of  a Hornist figure. 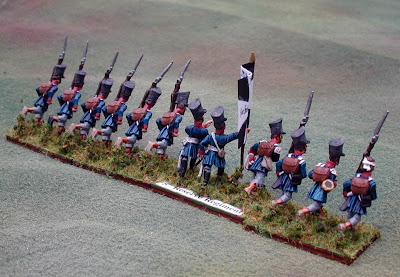 Another "unauthorized" flag, the cross this time being white on black (the reverse of that carried by the prior unit). Flag downloaded and printed from the Napflags site. 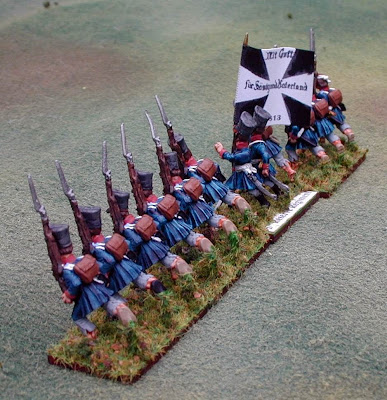 This regiment became IR #17 in 1815, the Fiertes Westfalsches (4th Westphalian). I have suggested a more pinkish hue for their facings, as were to be adopted as of the new regulations of March, 1815. There is a charming (but evidently untrue) tale that one of these units marched so hard to get to Belgium for the 1815 campaign that they tore off their neck stocks to avoid overheating on the march. They arrived in time to fight, and thus were granted the distinction of pink collars in commemoration of their herculean effort.

Some additional references about the complicated evolution of the Reserve Regiments and their uniforms on the Napoleon series (Dr Summerfield states that the information therein may contain considerable inaccuracies, although it is generally similar to that in the Almark puiblication by David Nash cited in one of my earlier "Reserve" posts).

Dr Stephen Summerfield's book (Partizan Press) is available from Caliver Books in the UK. I just wish the price were a lot lower. I understand that these are highly specialized works requiring in depth research for this degree of detail, as well as many line drawings, and targeted at a very limited market, and that even at these prices the books are more a labor of love than a significant source of income; still a bit too steep for my budget!